2019 was an easy investing year for everyone, right? The S&P 500 was up 31.5% (including dividends) while the Nasdaq Composite was up 35.2%; the best year for each since 2013. I'm sure everyone did at least that well. Many will look at the 2019 year-end results (especially in a few years) and think that the market must have been strong all year, but looking closer you will see that wasn't the case. It also helps when looking back, to recall what news was making headlines and what the investor sentiment was during historical time periods.

Chart A shows that the Nasdaq Composite Index had 3 distinct periods during the year. 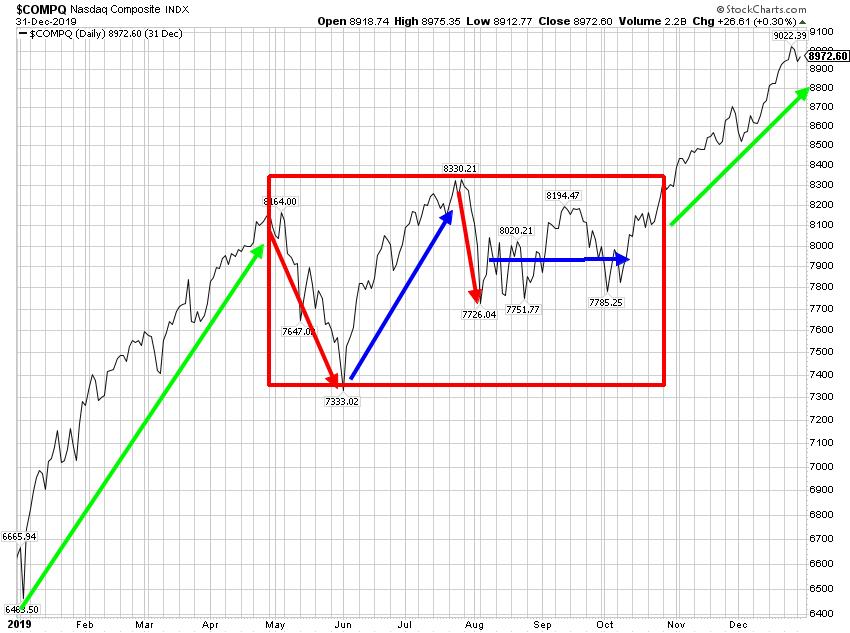 The year started in a strong uptrend, continuing from the lows on December 24, 2018 to the end of April. This was followed by a second period from early May until late October that consisted of a market correction, where the Nasdaq dropped by more than 10%, bounced back to a new high, sold off again, and then traded sideways (consolidation) for about 3 months. The final leg up started early October but didn't reach a new high until November, and then continued to make new highs to the end of the year.

Recall that 2018 ended with the U.S. equity markets falling during the 4th quarter and ending the year negative. The Nasdaq fell 23.6% and the S&P 500 dropped 19.78% at their lowest points on December 24th; this is what set the stage for 2019 and was top of mind for investors. Both indices made a v-shaped bottom (only known in hindsight) and started their new uptrend from December 26 to the end 2018 and leading into the 2019 chart above.

During January and February, it seemed like almost everyone thought another pullback was imminent and that the market action was just a dead cat bounce. We heard all over that "markets never bottom this way" and we may have even thought that ourselves. Very few wanted to increase their equity allocation for fear of buying right before the next leg down. For some, the 20% decline in the 4th quarter of 2018 was enough to take them completely out of the equity markets. Selling on the way down may have been the easy part for them because it stopped the pain of losses – but now they have to decide at what point do they get back in, unless they plan to hang up their investing hats for good. The 1st quarter of 2019 seemed full of negative news stories; a downturn in the U.S. economy, a corporate earnings recession, the trade war, a global recession, Fed policy mistakes, release of the Mueller Report, and on and on. If one follows news or pays attention to the talking heads on CNBC it was hard to feel too optimistic about the market's rebound – but rebound it did. The news never gives an all-clear signal on when to get back invested.

Moving into the 2nd quarter, the Nasdaq was able to eke out a few new highs at the end of April, but once May came, the sell-off that everyone was waiting for was finally here. We heard/read that the bull market was now too old as it just had a 10th anniversary, the trade war was escalating with additional tariffs, the recession may not come in 2019 but it's definitely coming in 2020, and on and on. The Nasdaq fell 10.8% – a legitimate correction – but then rebounded again to new highs; then sold off again, but not quite as much, then had some consolidation over the slow summer months. In August, the Fed made the first of three interest rate cuts in their "mid-cycle adjustment" – we heard that if the Fed is cutting rates the economic data must really be bad. We also saw inverted yield curves in the U.S. for the first time since prior to the 2008 recession – the news said this was a clear warning sign for a recession, but not clear enough to know when it would come, but maybe somewhere between 3 and 18 months in the future, or maybe longer, or maybe not at all.

After the yield curve un-inverted, the Fed made their 2nd rate cut, and then their 3rd, tensions with China calmed down – and the market moved higher once again. The last 4 months of the year saw the S&P 500 gain 10.3% and the Nasdaq gained 12.7%. Of course, the news at this point was that the move was too strong and we were overbought and to expect a sharp pullback. Still waiting.

We won't go as far to say that ALL of the news is just noise to investors, but certainly most of it is. It is very hard to keep up with all of the news, harder still to make sense of all of it, and what is not just the hardest thing, but actually impossible, is to know how the market will react to any of it. No one knew markets would be up over 30% in 2019, no one. News is mostly noise.

Tough year to be an investor...just like every other year.

Below is a quick update on what our trend following model did in 2019. Chart B is the red and green "in and out" chart that we've shown before. The line is the Nasdaq Composite shaded green when we were invested in U.S. equity ETFs and shaded red when the strategy was in cash (for Trend) or in defensive non-correlated ETFs (for Trend Plus).

We came into the year positioned defensively, after side-stepping nearly all of the losses in 4th quarter 2018, then had seven position changes throughout the year (invested to defensive, or defensive to invested). The position changes mid-year ultimately were whipsaw trades, i.e., we bought back in at higher levels, therefore it was unnecessary to sell and would have been better to remain invested. This, however; can only be identified in hindsight. Every time we sell it is because we feel the uptrend has broken and that is not a market in which we want to participate. All major pullbacks start this way – of course, so do a lot of minor ones. Even with the whipsaw trades Trend returned 16.6% and Trend Plus did 21% in 2019 – these are verified returns, net of the management fee.

We want to stress again the fact that absolutely no one knows what the market will do the next day, next week, next month, ever. Many television experts want you to think they know; but you only have to pay attention for a period of time to know they cannot be consistently correct, and you should cease listening to all the noise. The beauty of rules-based trend following is that you do not need to guess where the market is going; it just follows it. The short-term whipsaws that are part of any trend following system can be frustrating, but a bear market can be devastating. We have been on a bull run for almost 11 years; there are many who have never been in a bear market, believe it will never happen again, and do nothing to protect their hard-earned investments. We feel sorry for them.