In the last three months price has been squeezing out new record highs, but the number of new 52-week highs has been contracting. Clearly, fewer stocks are participating in the push to new price highs, and this divergence is of concern. However, we also note that there has not been a corresponding expansion of new 52-week lows, which shows that serious internal deterioration is not taking place yet. 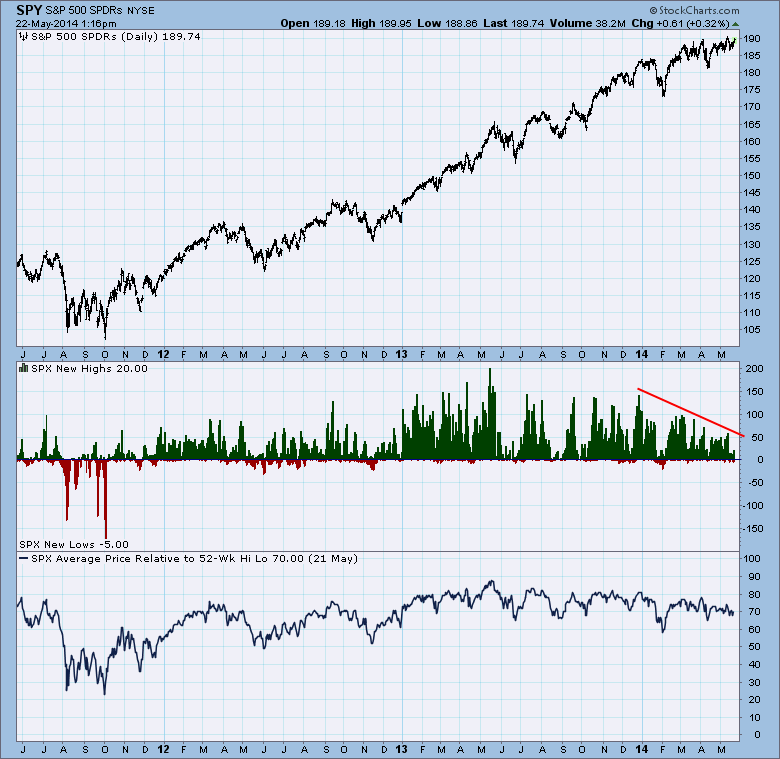 We can confirm this by looking at the Average Price Relative to the 52-Week High-Low Range. DecisionPoint tracks each stock in a given market index and determines the location of its current price in relation to the 52-week high and 52-week low. We express this relationship using a scale of zero (at the 52-week low) to 100 (at the 52-week high). A stock in the middle of its 52-week range would get a "Relative to 52" value of 50. This chart shows that the current Relative to 52 value is 70, meaning that on average the stocks in the S&P 500 Index are within 30% of the top of the 52-week High-Low range, and that is pretty strong.

Conclusion:  The fact that the number of 52-week highs has been fallen significantly since the high in December, tells us that rally participation is fading; however, there has been no expansion of 52-week lows, and the Relative to 52 reading of 70 tells us that there has been no significant increase of negative activity. So, for now, we can conclude that contracting new 52-week highs is not a serious problem.