I wrote in the last issue of ChartWatchers that the DecisionPoint Intermediate-Term Trend Model went on a Neutral signal. The first signal change since the BUY signal had originally generated on January 17, 2014! Well, it was a short-lived signal as today, 2 weeks later, the Trend Model generated a BUY signal.

The intermediate-term Trend Model generates its signals based on the position and crossovers of the 20/50/200-EMAs. You can see on the chart below that the January 2014 BUY signal generated when the 20-EMA crossed above the 50-EMA. The Neutral signal was generated when the 20-EMA crossed back down below the 50-EMA. It was a Neutral signal and not a SELL signal because the 50-EMA was above the 200-EMA when the crossover occurred.

Let's take a closer look at TLT's daily chart below. First, we see that yesterday, price broke above horizontal resistance at the top in late February and then today despite a down day, price stayed above it. The other important thing to note is the Price Momentum Oscillator (PMO) just concluded a crossover its 10-EMA which generated a PMO BUY signal in conjunction with the new Trend Model BUY signal. I'd say that is very bullish. The next area of resistance is all the way up to the January top and all-time highs. 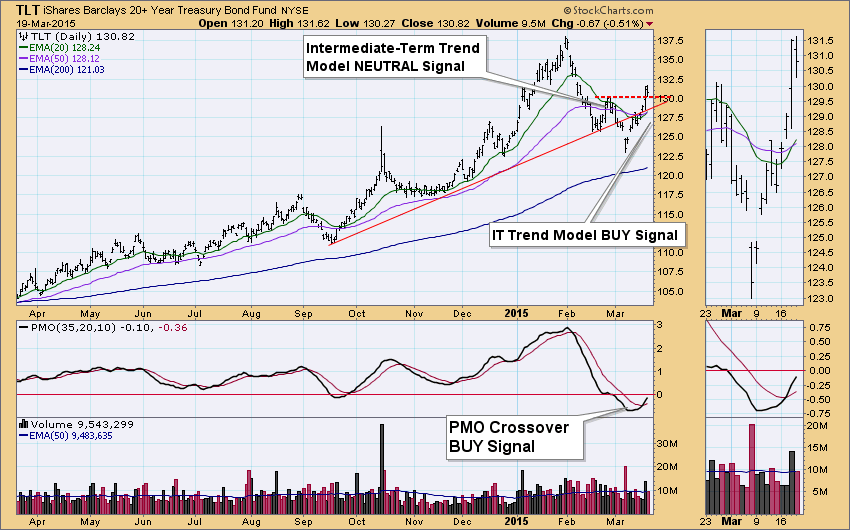 The issue with the PMO is that we really need to evaluate whether this BUY signal is coming in oversold territory or not. In the chart above it appears it is very oversold. How do we verify this? Using a daily chart with a three to five year range will usually show us the typical range for the PMO. When we do this, we see that the PMO is barely oversold, but that is better than a bottom or crossover in overbought territory. Upside potential is there.

The steep correction that TLT suffered earlier this month dragged the 20-EMA below the 50-EMA but price rebounded and a new Trend Model BUY signal was generated. This Trend Model signal accompanied a previous PMO BUY signal and that confirms bonds are back.