One of the things I have regularly stressed is the reliability of rising wedge formations, meaning that they have a high likelihood of breaking down. Currently, SPY has a pronounced rising wedge that has been forming over the last six months or so, as seen on the chart below. The mechanics of the wedge are simple: The steepest line, always the bottom of the wedge, is considered to be the most likely to fail because their steepness makes the line more difficult to maintain. 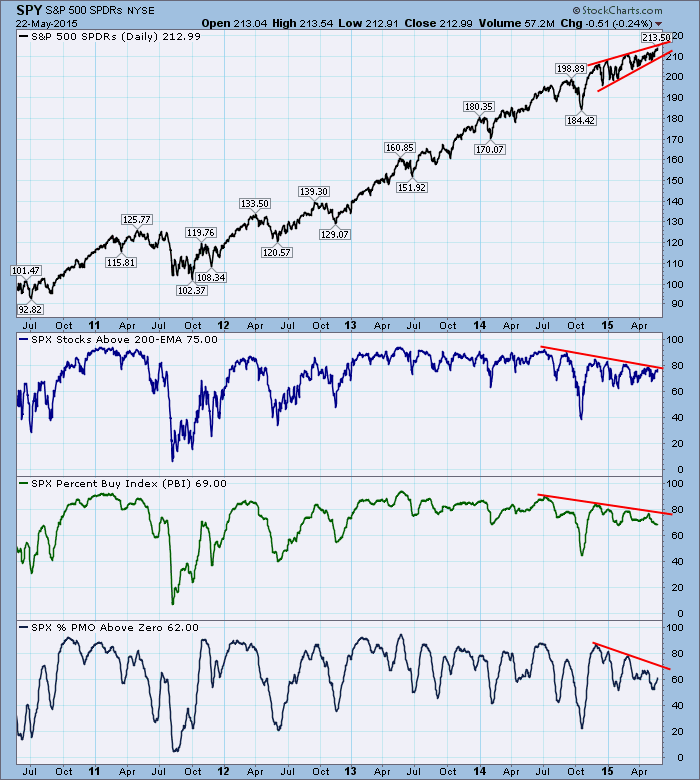 In addition to the rising wedge formation, which is bearish, there are negative divergences on three of our primary medium-term indicators. These indicators measure the percentage of S&P 500 stocks that are: (1) above their 200EMAs; (2) on Price Momentum Model BUY Signals; or (3) have PMO (Price Momentum Oscillator) readings above zero. These negative divergences have persisted since July 2014, and we can see that they have been associated with a few bumps during that time.

In my opinion, the combination of a bearish price formation and weakening internals increases the likelihood of a market correction. By "correction" I mean a pullback that will be sufficient to cause the rising wedge to break down. Once the trend line has been broken, the expectation for the price pattern will have been fulfilled, and the correction could then be over; however, it is also possible that the breakdown will initiate a much deeper correction. The extended period of internal weakening certainly argues for that outcome.