In the late-1990s I developed the ETF Top 5 Index (!SPWTOP5), which tracked the top five ranked ETFs (by PMO value) from our Tracker list of 100 ETFs. My original intention was to exploit the upward momentum of the ETFs with the highest PMO readings, presumably the strongest in the list and the ones with the greatest potential for gain. Theoretically, a portfolio of the top five would be maintained, changing the holdings daily based upon the rotation of ETFs into that small group. The Top 5 Index was calculated daily based upon the average percentage change of the top five ETFs. While my original plan didn't work so well--the top five often performed worse than the broad market, and the strategy overall was not a money maker--the Top 5 Index itself became a technical indicator which gave us a unique view of failing leadership.

In bull markets strong stocks tend to remain strong over extended periods, and top ranked stocks tend to stay in the top group for quite a while. In fact, they continue to perform well even after dropping out of the top five. Also, bull markets have a "deep bench" so to speak, and there are plenty of stocks competing for the top spots. However, when the market begins to correct or top out, most stocks, including the Top 5, lose upward momentum, so rather than fighting to be "king of the hill," most stocks are sliding down the hill. The result is that, instead of out-performing the market, the Top 5 under-performs badly. Most important, we can see that a sharp decline in the Top 5 Index tends to precede important market tops. 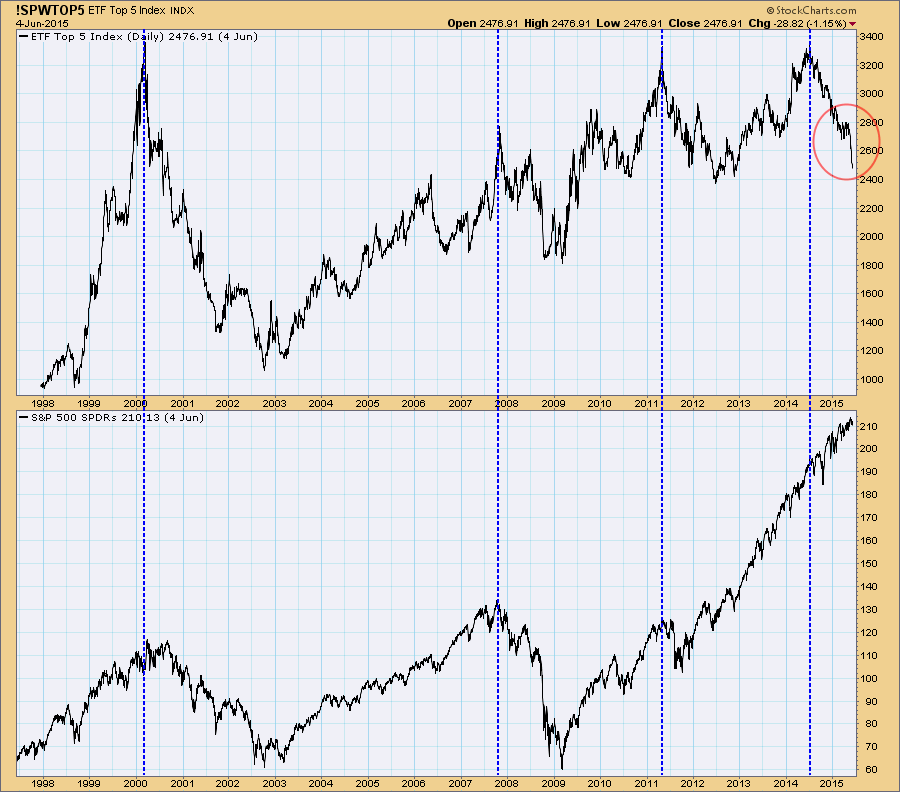 Currently, we can observe that the Top 5 Index has been declining for nearly a year, and recently it accelerated sharply downward. I would interpret this as a precursor to a serious market decline, but, looking at previous occurrences, there is no standard for how long it will take for the market to put in a top.

As a caveat, I must concede that there are only four notable data points in the last 17 years, not a formidable base of evidence. But taken with other evidence I have highlighted over the last several weeks, I see the weakness in the ETF Top 5 as just one more strike against an overvalued and overbought market.