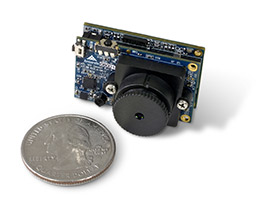 News has been picking up on a once little known company, Ambarella, Inc. (AMBA). For those unfamiliar,  AMBA is a leading developer of low-power, high-definition (HD) and Ultra HD video compression and image processing solutions. The company’s products are used in a variety of professional and consumer applications including security IP-cameras, sports cameras, wearable cameras, flying cameras and automotive video processing solutions. Ambarella compression chips are also used in broadcasting TV programs worldwide. Their partnership with GoPro, Inc. is part of the reason they have enjoyed an almost non-stop rally since going public in 2012. But as you can see, they aren't just about sports cameras. My introduction to Ambarella was made through a Price Momentum Oscillator (PMO) scan when I was looking for investment opportunities back in February.

So let's go back in time to February 2015, the day I did the PMO scan, on the 27th. You can see there was a PMO crossover BUY signal generated that day when the PMO crossed above its signal line. This was the reason it showed up in my scan. I gazed at the chart and immediately began to lick my chops. I see chart after chart after chart everyday when I do my market review and scans and you don't see that many perfect set-ups. The EMAs were configured in the best possible way, 5-EMA > 20-EMA > 50-EMA > 200-EMA, meaning all Trend Models were on BUY signals. Price had just broken out of a declining trend channel and follow-through on the breakout had occurred, it even appeared there was a very short-term bullish flag execution. The SCTR value had been over 90 since September which implied internal strength. OBV was good, it hadn't let the recent declining trend move readings very low, in fact they stayed steady. Many might say, "Wait! It dropped over 1% that day."  I actually liked that. The PMO positive crossover told me to expect higher prices and being able to get in after a 1% drop gave me an opportunity to make that up quickly rather than having to buy on a large advance that had pushed the PMO through its signal line, I didn't have to absorb the 1% loss on that pullback because it was baked in. At the very least, I expected price to at least get up to test resistance at the January high. 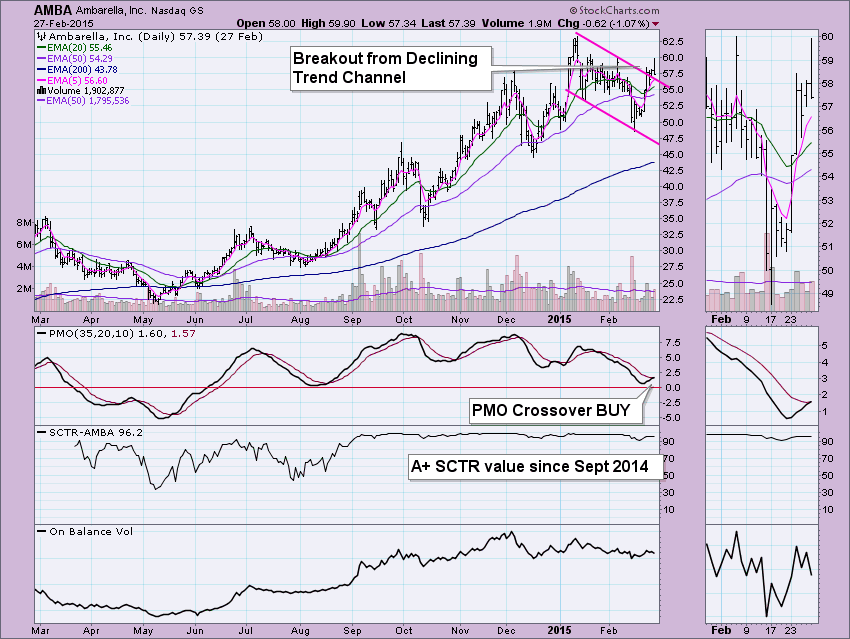 Let's look at Ambarella now. Since February 27th the stock is up over 90% and it still looks strong;  with a P/E of 60, clearly the street is expecting even more out of AMBA. According to Yahoo! Finance, current quarter estimates have risen from 43 cents per share to 75 cents per share, while current year estimates have risen from $1.67 per share to $2.67 per share. Carl pointed out to me that it has had very defined cycles and it is coming off of a cycle peak. The last two cycle troughs were not that horrible and so far price action suggests consolidation versus drastic correction. In any case, stops should be set, albeit loosely as this stock makes 4% and 5% moves regularly in a day. The SCTR value has not hesitated or moved below 90 since February. 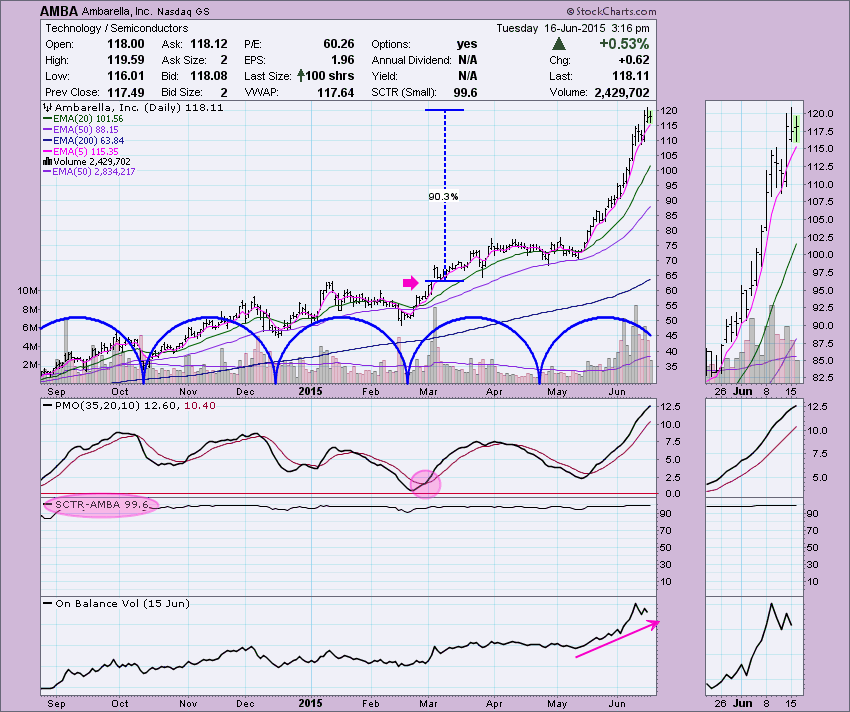 I suppose the big question is whether it is too late to get in. The market in general is struggling and I remain bearish on the broad market for the intermediate term, but this stock has continually outperformed the market. Of course, I'm writing about it, Jim Craemer apparently called it out on his Fast Money show, Zacks just wrote about it as a Top 3 pick and gave it a #1 rank (strong buy)... sounds like a "jinx" situation or more technically, sentiment is contrarian, so with strong bullish sentiment comes the risk of too many on the bandwagon, causing the wheels to fall off. Oh! And a very important caveat: Past Performance DOES NOT guarantee Future Results!