In the last two weeks I observed something I don't recall ever seeing before. Two market indicators, that I never fail to review at the end of every trading day, are the Climactic Volume Indicator (CVI) and the UP and DOWN Participation Indexes (PI). The CVI is based on volume, specifically Joe Granville's OBV studies. The Participation Indexes are of my own design, and based upon price movement. I refer to them as "ultra-short-term" indicators because their primary purpose is to identify buying and selling climaxes, which tend to be very short-lived. Without going into the details of how they are calculated, let's just say that they track volume and price for each stock in the S&P 500 within a very narrow envelope, registering a "hit" whenever the edges of the envelope are touched or exceeded. The scale shows the percentage of stocks in the index hitting those limits.

The first chart shows the indicators during the 2008-2009 bottoming process, which has examples of how they are supposed to behave. The two boxes show what normally happens after a period of heavy selling, which is punctuated by the long red bars of a selling climax. Note that, as price reverses, the indicators begin registering an internal reversal with long green bars, which quickly reach climactic levels. 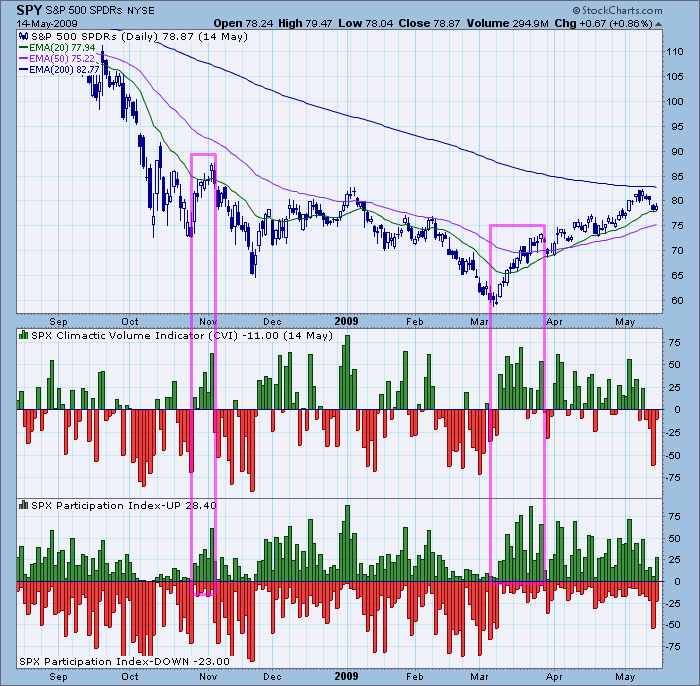 Now, let's look at what happened after the recent selloff. Even though price reversed violently upward, neither the CVI or PI registered a comparable internal reversal. I perused the 17 years of indicator data we have, and I couldn't find a similar case where internals didn't quickly respond to price reversals. What caused this tepid response? Internals weren't broken by the sharp price decline, but they were certainly bent way out of shape and will take longer to return to normal. I interpret it as if someone has turned a switch from BULL to BEAR. In fact, the 50EMA will cross down through the 200EMA on Tuesday, which by my definition, changes SPY from a long-term bull market to a bear market. 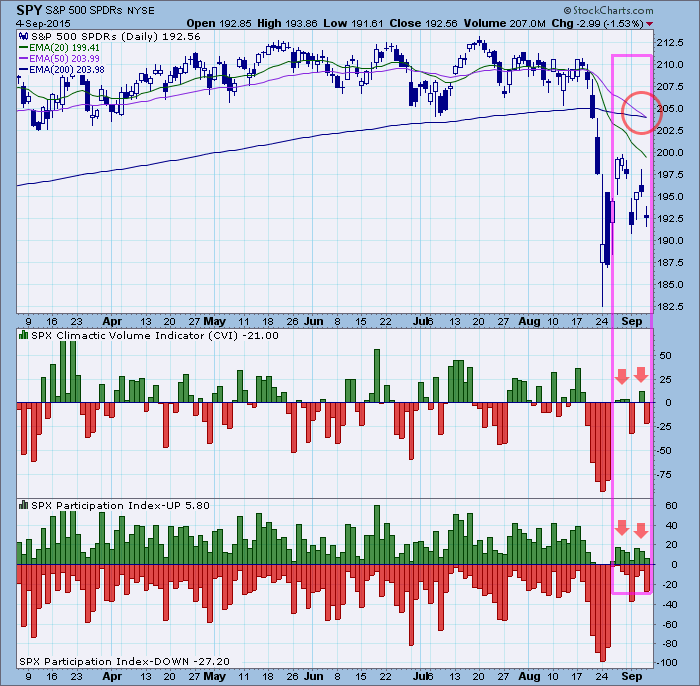 In 17 years there is not another set of similar data points from which to draw conclusions about a possible outcome from the current conditions, but I don't see any reason to be optimistic about it.