Based upon the fact that the 50EMA is below the 200EMA, I consider that we are in a bear market, and that we should expect negative outcomes more often than positive ones; however, we should remember that positive outcomes are also possible some of the time. Case in point, the market's recent behavior. 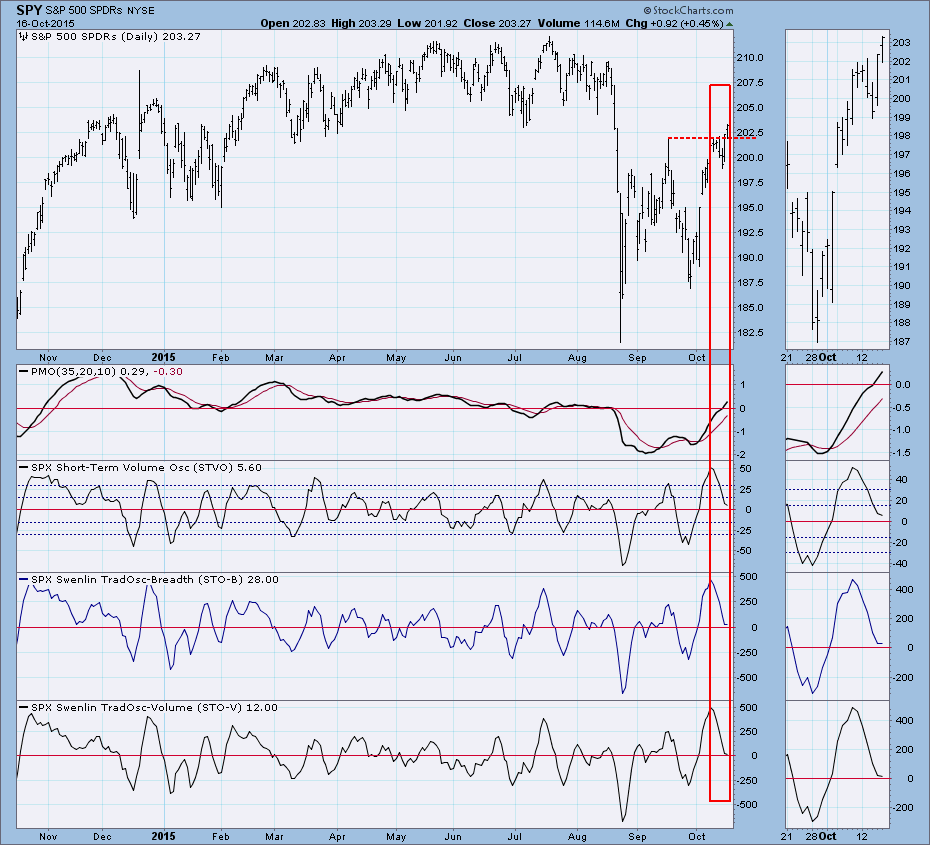 On the chart above, one positive sign was how price reacted when the short-term indicators reached overbought levels and turned over. I had expected that price would pull back as overbought conditions were relieved, and I even thought that the double bottom formation might fail as price failed to penetrate the confirmation line drawn across the top between the two bottoms. I even thought it probable that the indicators would drop below the zero line and penetrate well into oversold territory. Well, none of that has happened so far. Instead, price moved higher and broke through the resistance line, and the indicators appear to be ready to bottom above the zero line. This is bullish for this time frame.

On the chart below, we can see that price has moved above all three EMAs, which, of course, causes them to move up and converge. If price continues to trend up, the 20EMA will cross up through the 50EMA, generating an IT Trend Model BUY signal. It will take quite a bit longer for the 50EMA to cross up through the 200EMA, and the bear market will remain in effect until it does. The fact that the confirmation line has been penetrated gives us a minimum upside target of about 217 (that estimate is on the conservative side). However, price has entered a zone of resistance and is approaching a declining tops line. 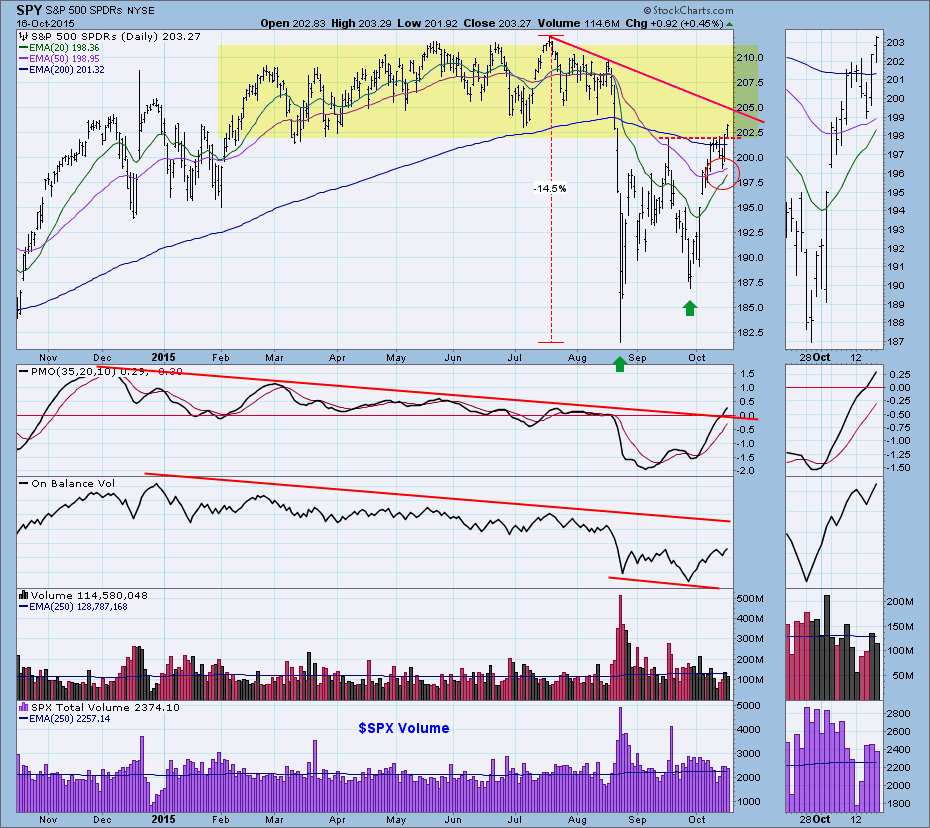 Another positive sign appeared a week ago when the weekly PMO turned up. This is not insignificant and implies that we may be looking at an important bottom. 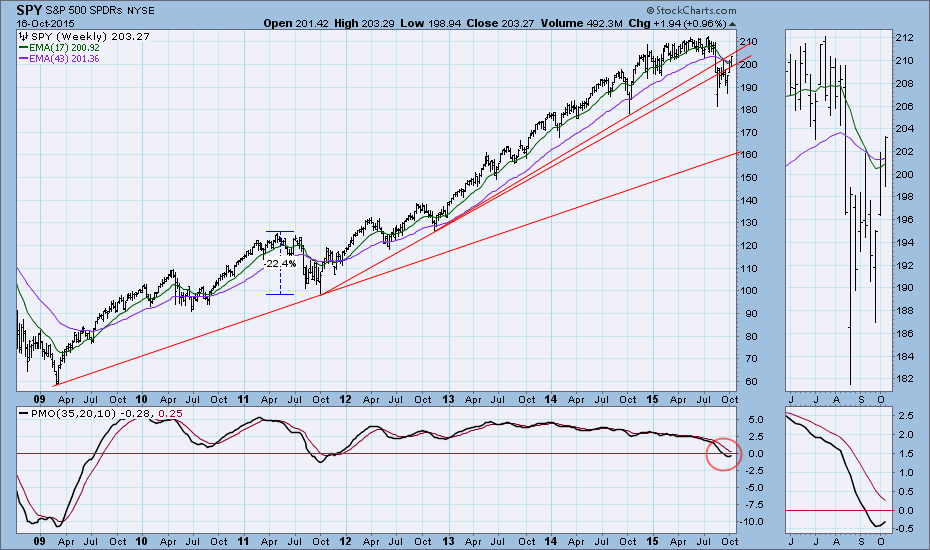 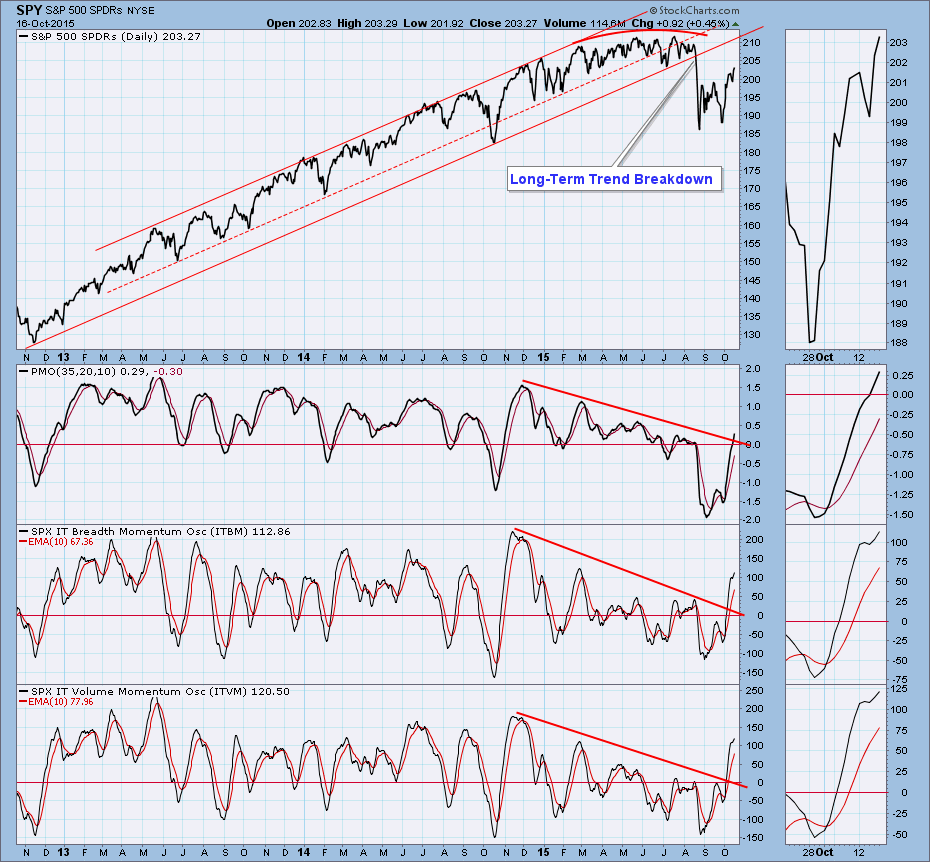 CONCLUSION:  The market has been behaving a lot better than I expected it would, and there are positive signs that can't be ignored. Because we are in a bear market we should continue to expect negative outcomes more often than positive ones, but currently the bulls have control. Price is entering a zone of resistance and intermediate-term indicators are becoming overbought, conditions that could cause the advance to stall. We should also remember that bear markets can produce some attractive rallies. But we are on the verge of another positive event. If the 20EMA crosses up through the 50EMA, a new Trend Model BUY signal will be generated. That could happen next week.