During yesterday's webinar, I stirred up some renewed interest in the DecisionPoint Thrust/Trend Model with a reader request for the model analyzed on the Nasdaq 100. I explained that using a "thrust" component with the DP Trend Model will often times get you an early entry on rallies and can prevent you from staying in on a bad BUY signal.

We'll get to the NDX chart in a moment. First, I'll give you a quick refresher on how the Thrust/Trend Model works. You are already familiar with the DecisionPoint Trend Models (if not, here's link for the article in ChartSchool). The Thrust/Trend Model operates with the Intermediate-Term Trend Model (ITTM) as the "trend component".  The "thrust component" is made up of the Price Momentum Oscillator (PMO) and Percent Buy Index (PBI). Thrust goes on a BUY signal when BOTH the PMO and PBI have positive crossovers their signal lines.

Let's look at the NDX chart I showed yesterday and I'll continue the discussion. It's easier to have a visual. The blue lines should look familiar, they line up with ITTM signals (20/50-EMA crossovers). The red line is when both the PMO and PBI have positive crossovers. 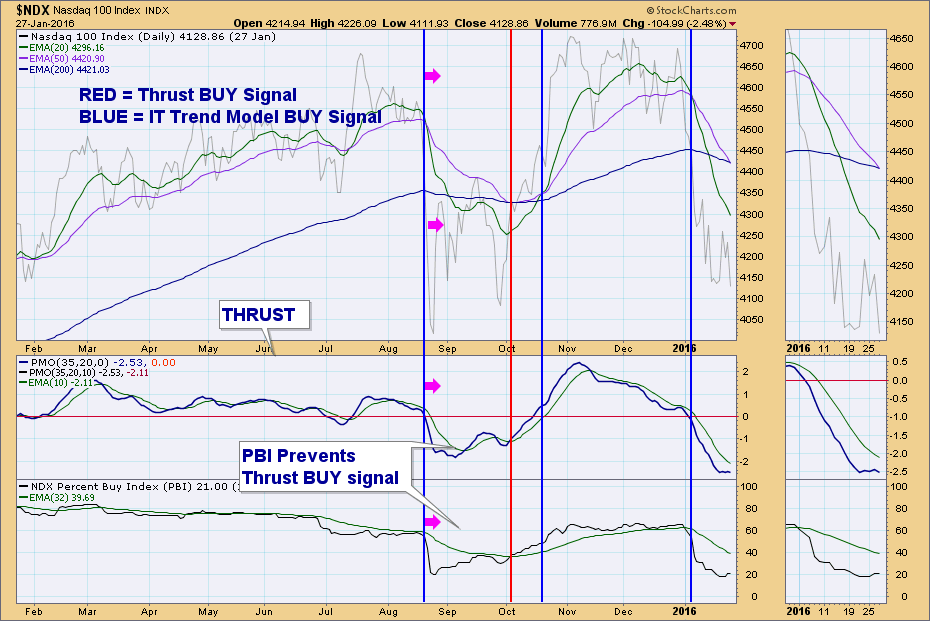 So we are going to start at the first blue line. The ITTM goes on a Neutral signal. Once the ITTM is NOT on a BUY signal, thrust is in charge of the signal change. Thrust determines BUY signals only and the failure of them should the ITTM not confirm with a BUY signal of its own before either the PMO or PBI loses its positive crossover. Notice that in the first part of September, the PMO has a positive crossover. The PBI does not and until it does, the Neutral signal will remain. The PMO then loses its BUY signal, so now we wait for both. Finally at the beginning of October, the PBI has a positive crossover right when the PMO does. The red line represents the Thrust/Trend Model BUY signal.

Thrust and Parry (Part I)