Back in the early-1980s I began my studies of the stock market, and my initial focus was on on-balance volume (OBV). Every evening I would get the evening paper and extract price and volume data on a small group of stocks, and then record those data on eight-column ledger paper. At that point I would perform the OBV calculations using the handy-dandy calculator pictured below. 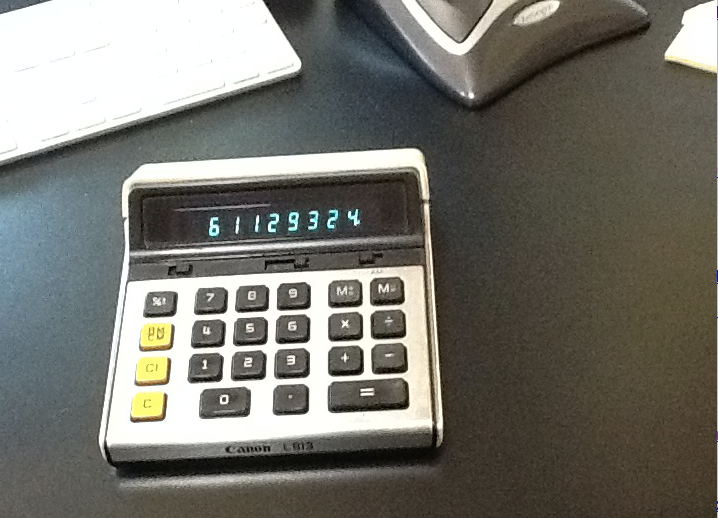 Yes, I still have that calculator, but I am thankful that OBV calculations are now performed in Redmond, Washington by StockCharts.com. Nevertheless, I love that little machine because of the VFD (vacuum fluorescent display) that you can read in a dark room. I'm sure that I am also fond of it because it was one of the first affordable hand-held calculators. This cost me about $30, whereas just a few years earlier calculators cost in the neighborhood of $350.

My next technology upgrade was a Macintosh SE computer with modem. I could download the price and volume data for the Dow 30 Industrial stocks from CompuServe for about $30 per month. That was a lot of money back then, but it was worth it because I could then import the data into an MS Excel spreadsheet and have the computer calculate the OBV. Fantastic!

As for charting, charting applications just weren't available for personal computers back then, so I did all my charts using 8 1/2 by 11 graph paper. Boy, that was fun. For the market I taped together sheets of graph paper on one wall of my study and hand charted the Dow, the McClellan Oscillator, and a few other indicators. It was awesome! The fatal flaw in this grand display was that I had enough room to chart the Dow up to about 1,200 before the chart ran into the ceiling. I wish I had a picture of that chart, but back then taking photos was a lot of trouble. It required that we use something called film, and once a picture was taken, we had to drive down to a Photomat kiosk to have the film developed. But I digress.

Data collection and processing was a major obstacle to overcome before getting to the analysis part of the job, but where did one learn how to do the analysis? There were not a lot of books on the subject, and the major TV network shows were nearly all fundamental analysis. Fortunately, back in the 1970s and 1980s a local UHF station, KWHY-TV, had eight hours of business news and market coverage. The rest of the day was Spanish language programming. Sometime in the 1990s KWHY management realized that they were making more money on the Spanish language broadcasts, so that was the end of the stock market coverage. But it was great while it lasted.

In the Los Angeles area at that time there were a bunch (fundamental analysts might call it a coven) of technical analysts who got regular guest spots on KWHY. None of the major financial channels ever had the amount of technical analysis coverage that KWHY did. Best of all was a show that came on every day 30 minutes after the market close, Charting the Market with Gene Morgan. Gene covered basic elements of the day’s market action from a technical point of view. He would draw trend lines, lines of support and resistance, breakouts and breakdowns -- all the basic Edwards and McGee stuff. I am astounded that I was fortunate enough to have this unique resource available to me. Watching this show day after day is where I learned the basics of charting and technical analysis.

Besides the benefit of learning technical analysis basics, I also learned the value of repetition, or I should say the discipline of looking at the same market and indicator charts every day without fail. It is the best way to gain valuable understanding of the market by watching how it evolves from one situation to the next. This is what I had in mind when I developed the DecisionPoint Alert daily report. In it we cover the major market indexes and the nine sector SPDRs, which are composed of all the stocks in the S&P 500 Index. Sets of indicators help determine the trend and condition of the market in three different time frames, and there is also coverage of the U.S dollar, gold, oil and bonds. The DecisionPoint Alert is my tribute to Charting the Market with Gene Morgan, and I think it can be an important resource for StockCharts.com subscribers. At the very least it may present some ideas about how to construct a market review process that fits your specific needs.

There are a lot of things not to like about "the good old days," such as a total absence of technology to help us collect and process data, limited resources of information, and news that was almost always at least a day old. But there are also some good things worth keeping -- things like a calculator with a display I can actually read, or a daily market review process inspired by Gene Morgan that helps instill discipline in our daily analysis. Today, rather than a scarcity of information, we are buried under an avalanche of it. We need to acquire a routine and the tools to sort out the excess so we can get to the essentials.