The Dow Jones Industrial Average is clearly in a bull market, having made a strong move in November and December  to new, all-time highs and coming within less than a half point of reaching 20,000; however, as I perused the charts of the 30 Dow components I found three stocks that are actually in bear markets. That is only 10% of the the component stocks, so it isn't a big deal, but I thought it was worth looking at them. But before I get to those bear market stocks, let's quickly evaluate the Dow chart. 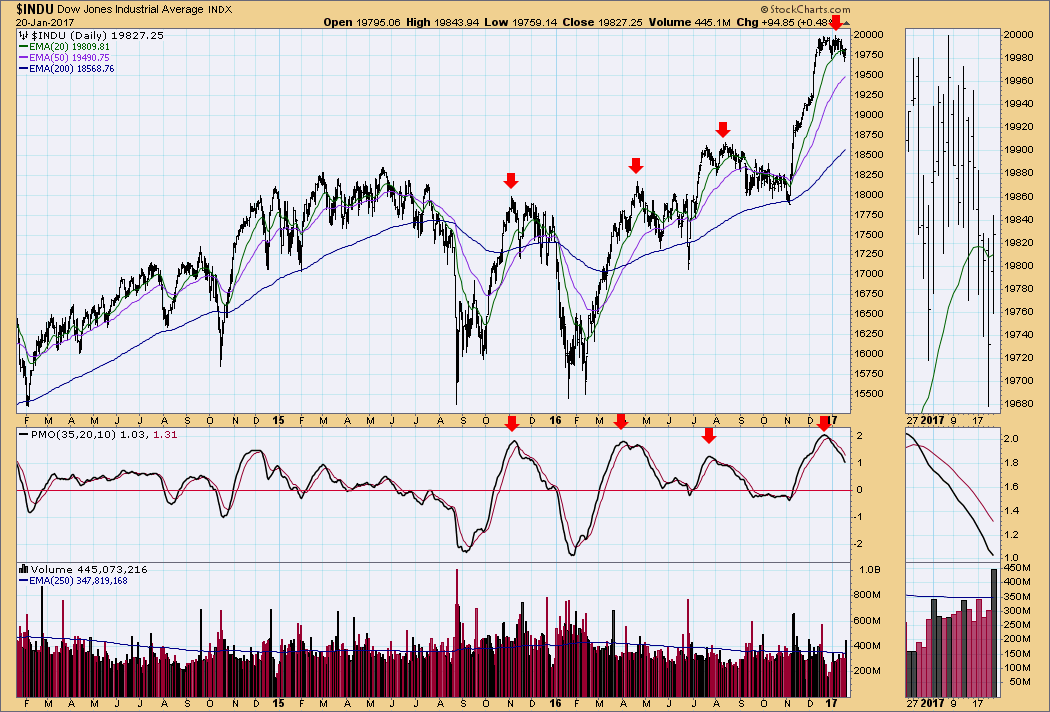 The separation between the moving averages is more extreme than it has been in three years, clear evidence of how over-extended the Dow is. Also, the PMO has topped and is falling below its signal line, setting up the average for a correction. (I highlighted three previous price tops to illustrate similar circumstances.)

The first bear market stock is Coca-Cola (KO). I define a bear market as being when the 50EMA moves below the 200EMA, which for KO occurred at the end of September. I normally assume that that action is a long-term SELL signal, but extended sideways price movement can result in frequent crossovers as happened in 2015. Nevertheless, long-term bear market is my first assumption. There is a price bottom this month that was above the December bottom, which is confirmed by the PMO, so the worst could be over. Next we need to see a top above the December top to establish a rising trend.

The next bear stock is Nike (NKE), which entered a bear market in May. Price is rising out of the November bottom, and the rising trend has been persistent enough to generate an Intermediate-Term Trend Model BUY signal (20EMA crosses up through the 50EMA). But the price advance has been relatively puny, and there is an OBV negative divergence, meaning that there is no volume behind the move. 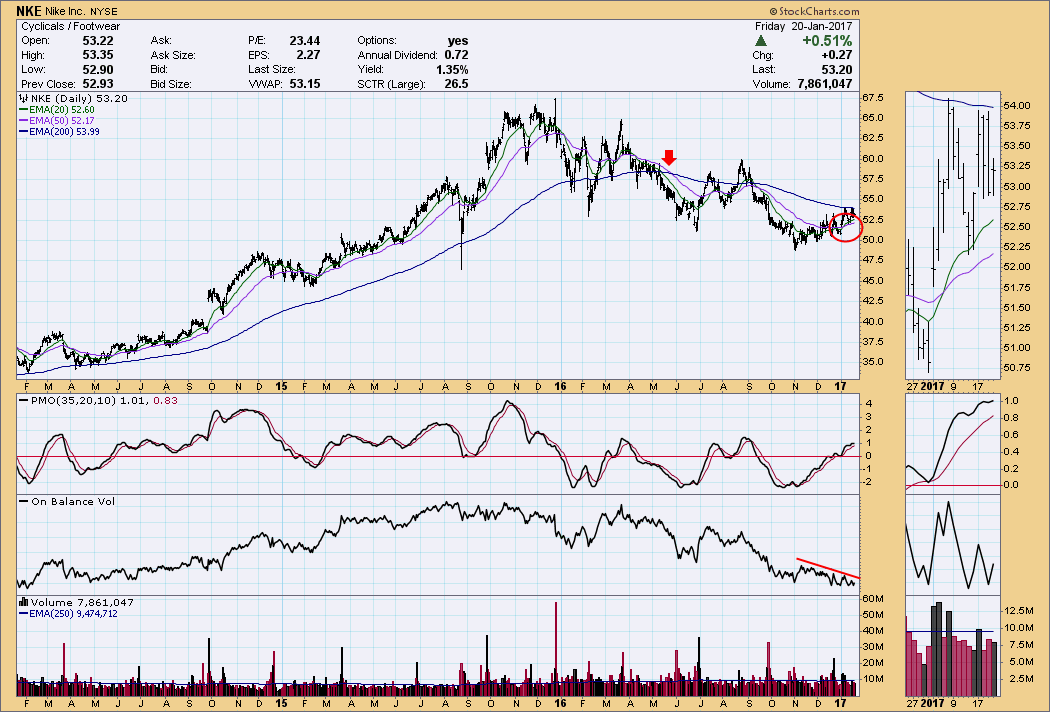 The final bear stock is Pfizer (PFE). For most of the three years shown PFE has been moving higher in the broadest context, but the price swings have been so wide, long-term whipsaw signals have been generated. Unless price reverses upward, it appears that an Intermediate-Term Trend Model SELL signal will be generated (the 50EMA is below the 200EMA and the 20EMA crosses down through the 50EMA). 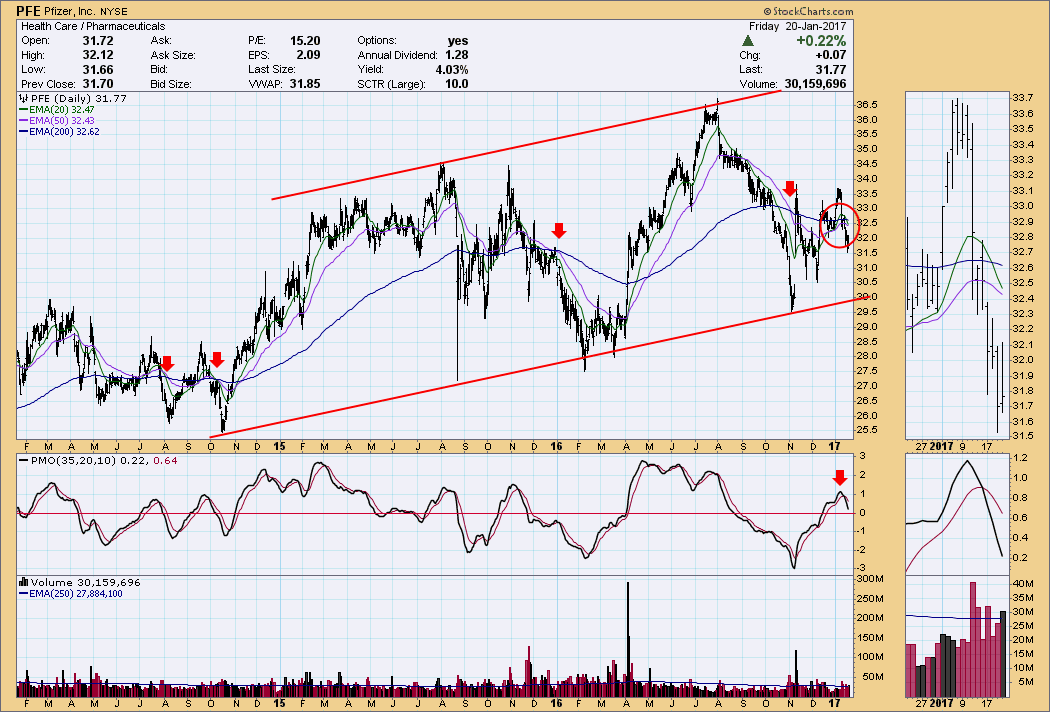 In addition to the three bear stocks above, there is one more stock that is about to turn LT bearish: Walmart (WMT). Note that the 50EMA will probably cross down through the 50EMA this week, unless there is a sharp upside reversal. 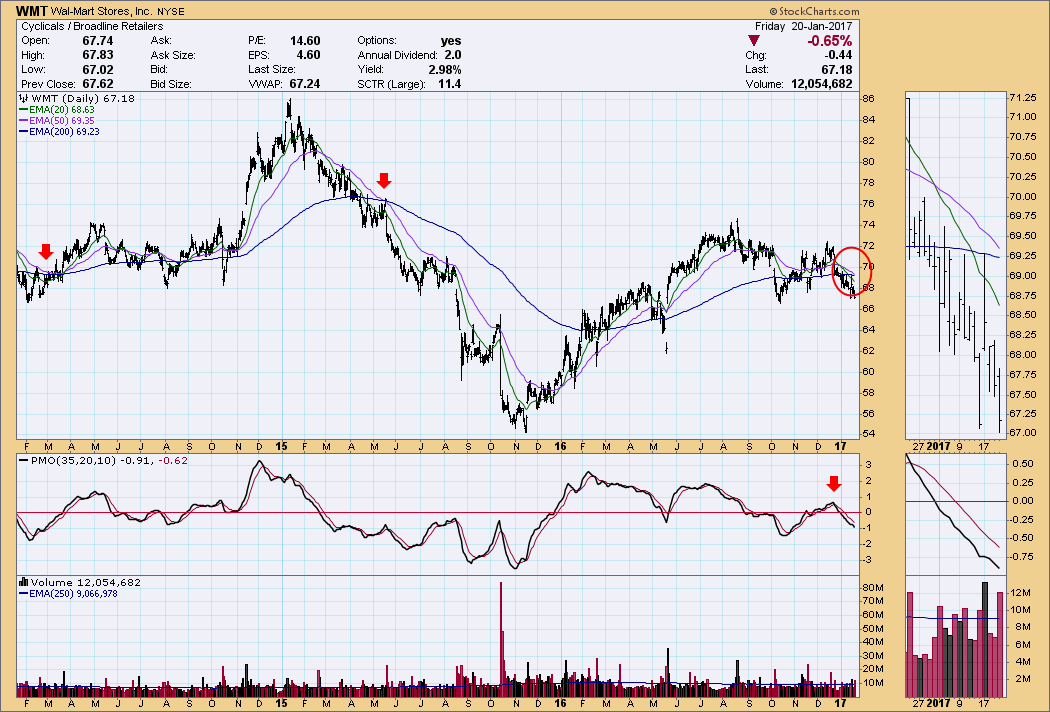 SUMMARY: The Dow is in a bull market and is near all-time highs, but it is likely to experience some degree of correction. Most of its component stocks are strong and in their own bull markets, but there are a few laggards which are in long-term bear markets. They are unlikely to fare well if the broad market corrects.