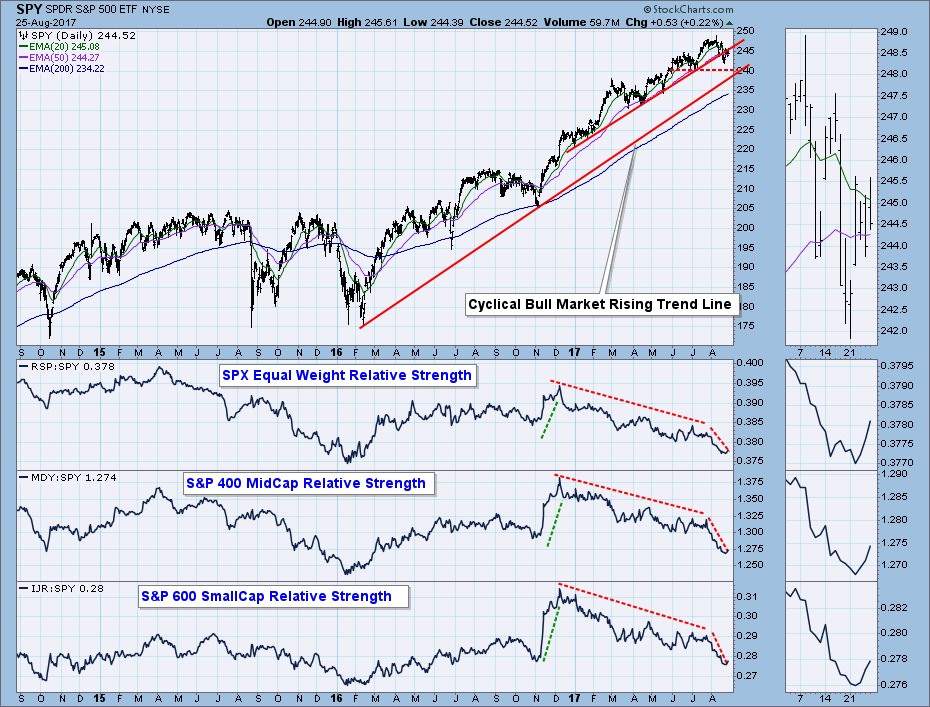 While this condition can persist for quite some time, it is not necessarily fatal; nevertheless, it is highly undesirable to have such weakness in smaller-cap stocks. Note how a similar condition in 2015 led to a broad market correction. The ideal pattern, the one that confirms the general confidence of market participants, is when the smaller-cap stocks are stronger than the large-cap stocks, such as the rising-to-sideways pattern we can see in most of 2016.

On Monday of this week stocks finished last week's decline, and Tuesday brought another oversold bounce followed by three days of consolidation; however, prices have entered a short-term down trend, and a down trend channel has been established. I note that volume on Tuesday's bounce was light (green arrows on chart), and it remained so for the rest of the week. This does not confirm the rally. 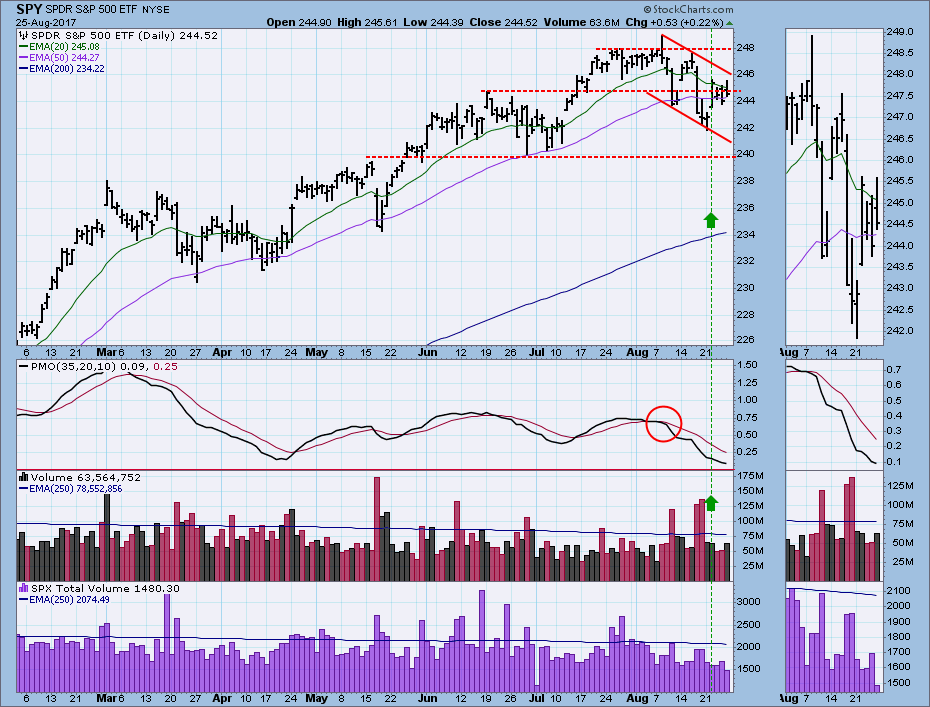 Last week the rising trend line was violated, but price seems to have recaptured it. 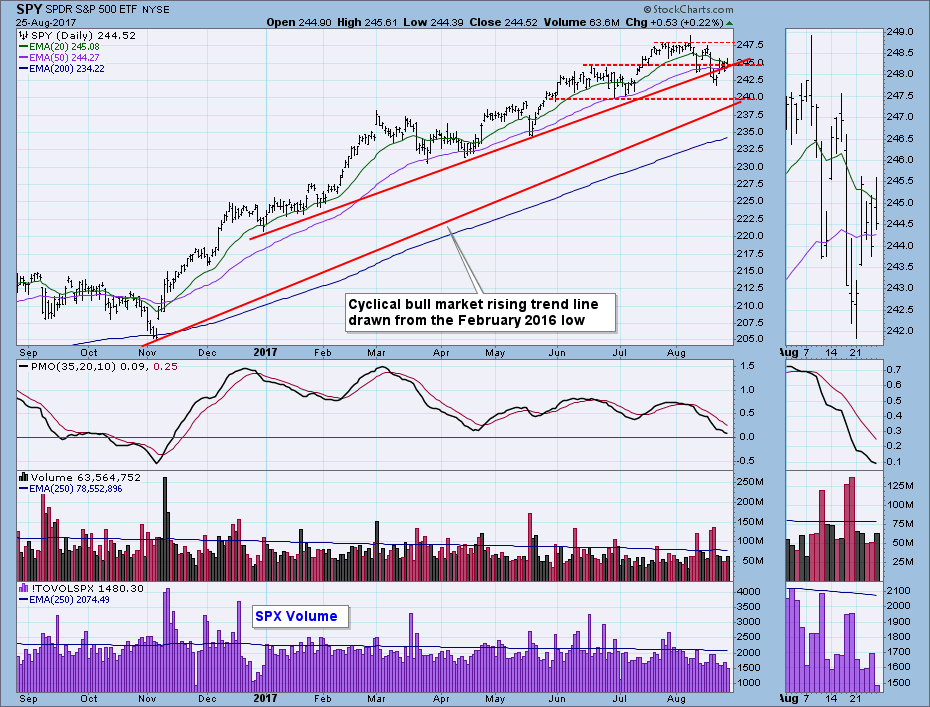 On the weekly chart price remains within the rising trend channel, but the weekly PMO has moved down from the tight sideways pattern it had maintained for months. This is not a major concern, because price has plenty of room to correct down to the rising trend line without causing major technical damage. 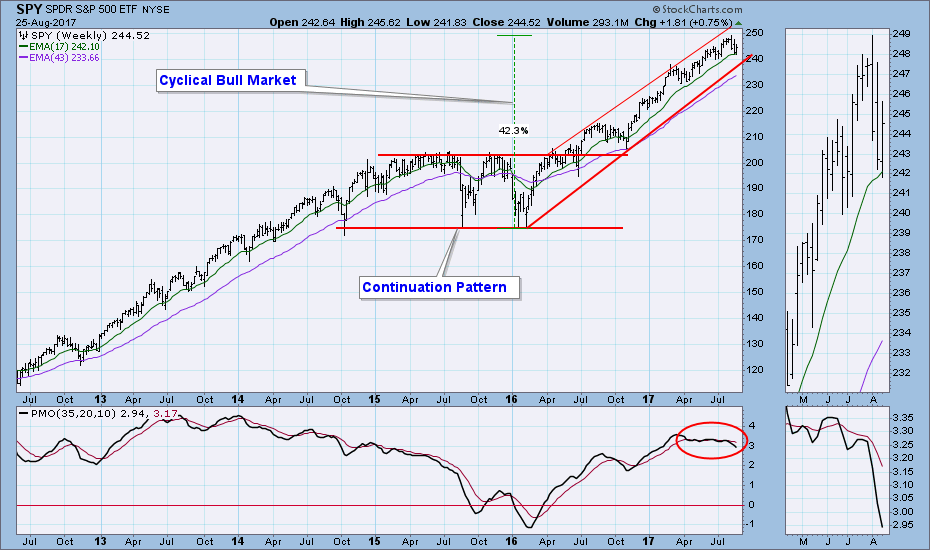 Short-Term Market Indicators: I'm not getting anything from these indicators this week. 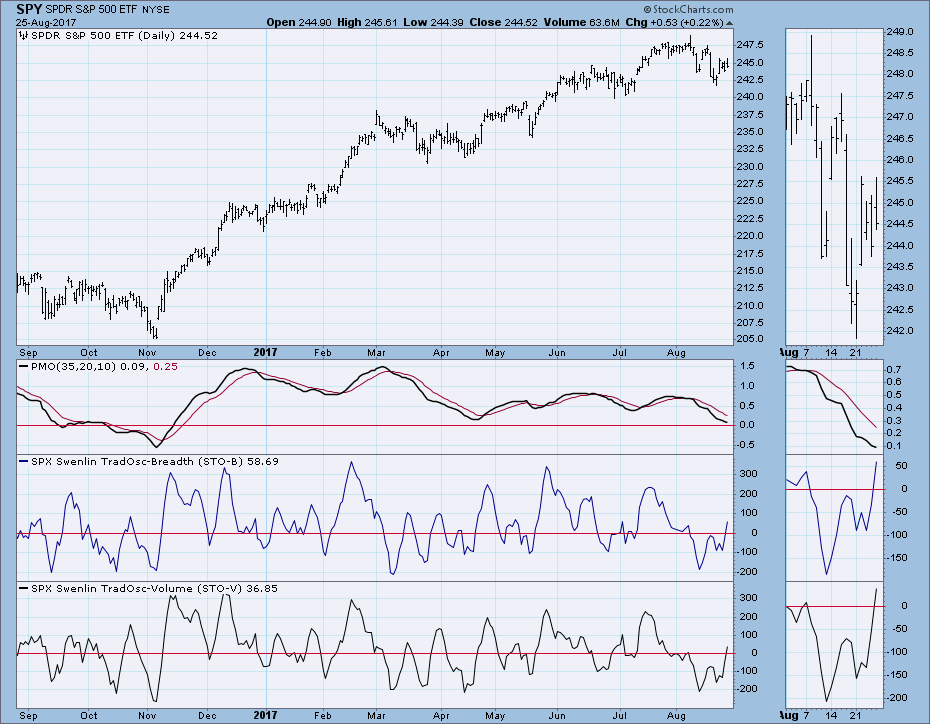 Intermediate-Term Market Indicators: The ITBM and ITVM have turned up for the second time this week, and they are oversold relative to readings over the last 18 months. 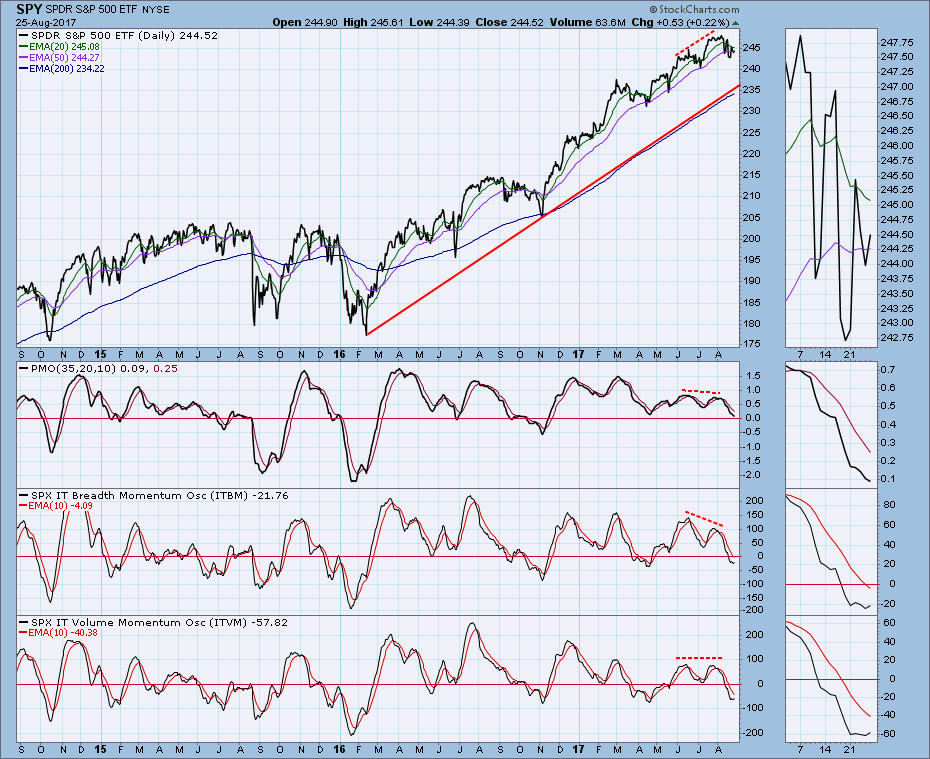 Conclusion:  Money is being focused on large-cap stocks and the smaller-cap stocks are weaker as a result. This is not healthy, and the market is vulnerable because of it. The lack of volume to confirm Tuesday's bounce makes me doubt that price is going to break out of the declining trend channel.

I'm embarrassed to say that I completely missed the reverse flag formation that had formed last week -- I interpreted it as a new rising trend. On Friday the flag broke down as we normally expect. UUP has already reached the next support, which is drawn across the August low. The daily PMO has topped below the zero line, so that support is in danger of failing. 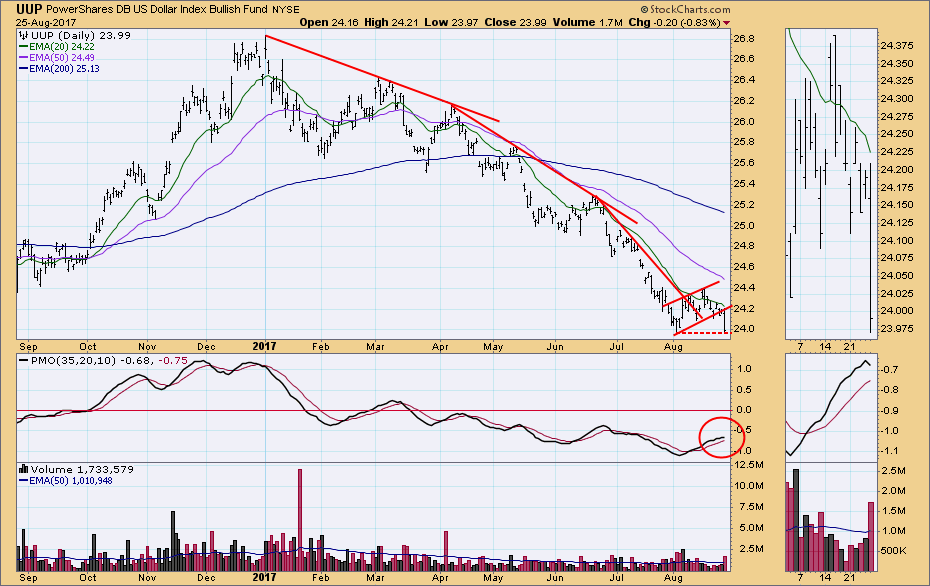 It is no excuse, but the reason I missed the reverse flag on the daily chart is that I was more focused on the major support line drawn across the May 2016 low on the weekly chart. Price had bounced off that line, and it appeared to me that the support was going to hold. It still could hold, but the daily chart makes me think not. 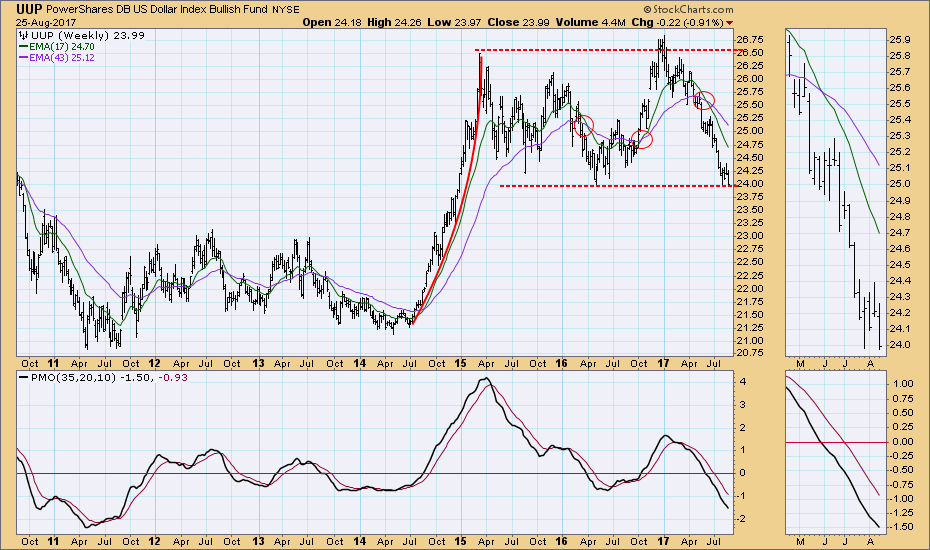 Gold is being squeezed into the apex of a rising triangle, the top of which is the upper limit of a five-month trading range. With a rising triangle we normally expect an upside breakout, and today's breakdown of the dollar may assist that outcome. Sentiment remains bearish. Renewed weakness in the dollar makes me one click more bullish. 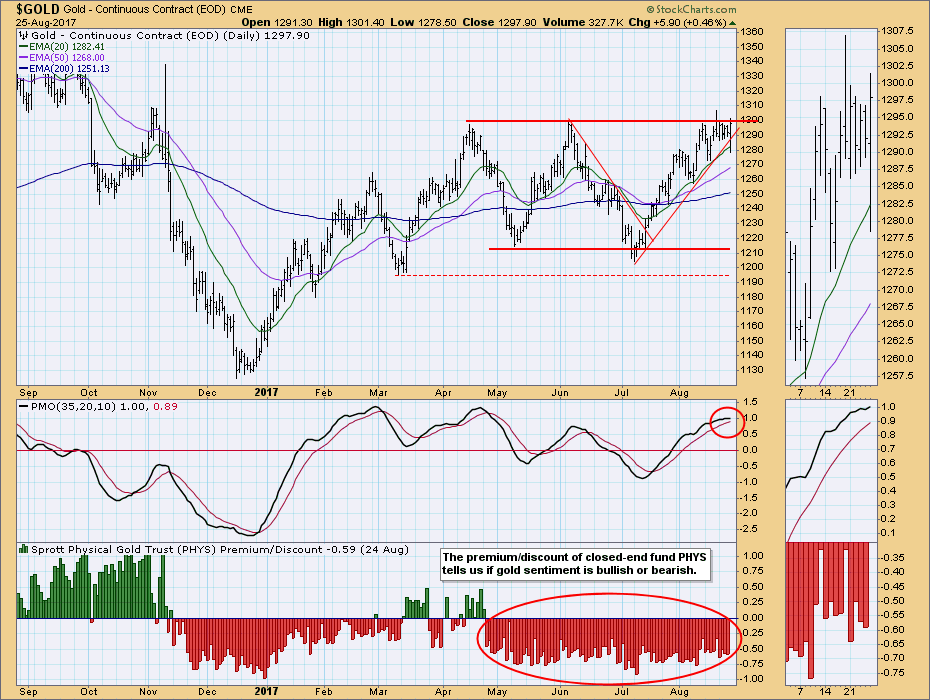 Gold has made a decisive break above the bear market declining tops line, and the weekly PMO is positive. 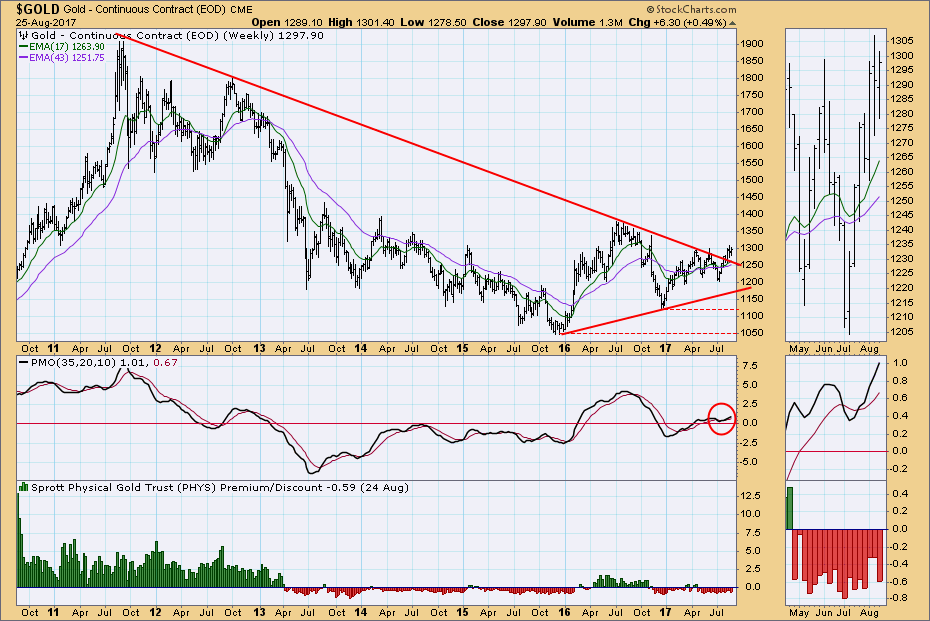 USO has been struggling with the declining tops line drawn from the January 2017 high, but it has also found support on a shorter-term declining tops line. Its reluctance to decline offers some hope that we may see another breakout attempt. 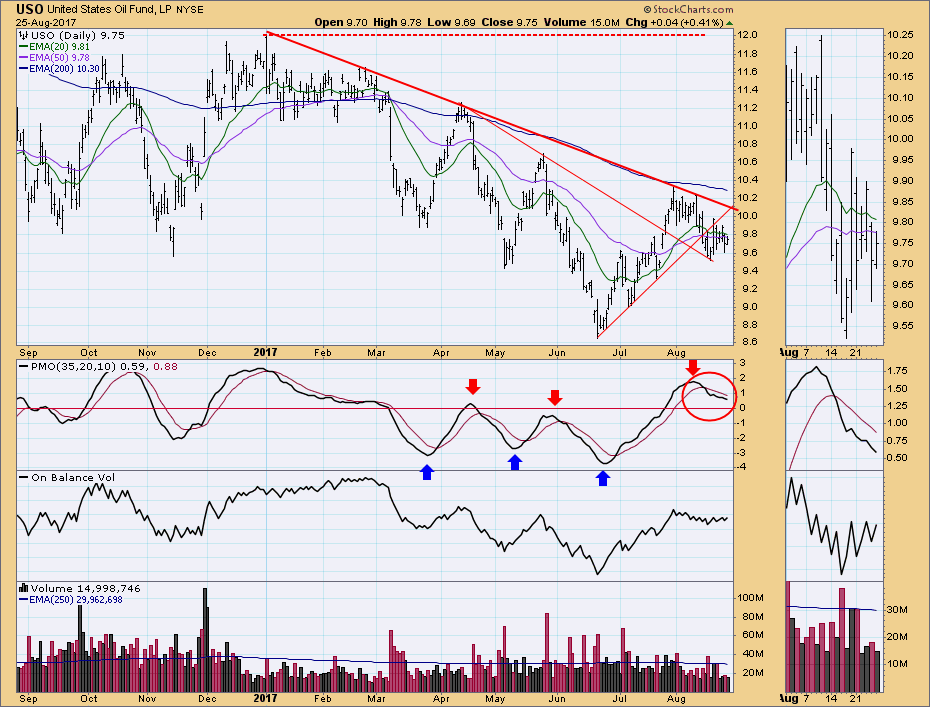 While the weekly PMO is positive, it looks ready to top. Note that the declining tops line is within the horizontal trading channel. 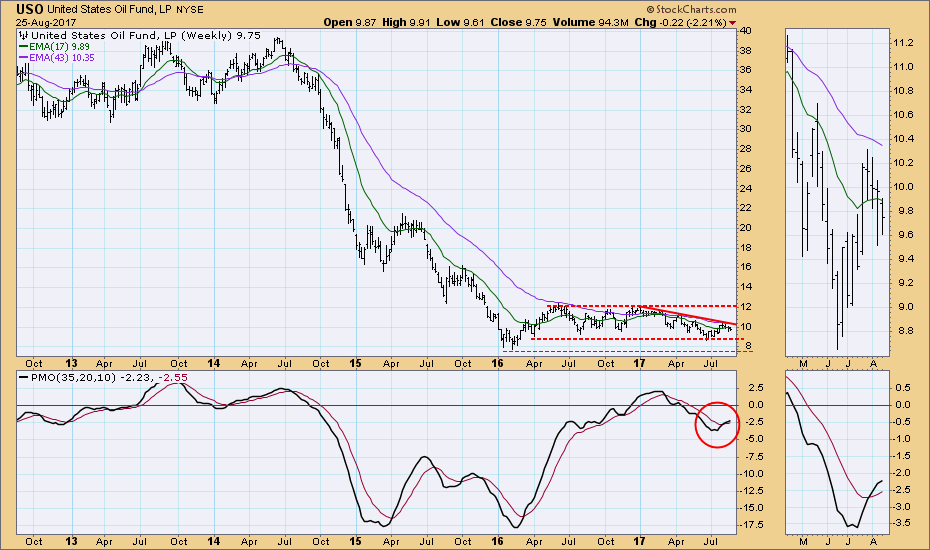 TLT has been pushing hard at the top of a rising wedge pattern. We normally expect this pattern to resolve downward, but an upside breakout seems more likely at this point. 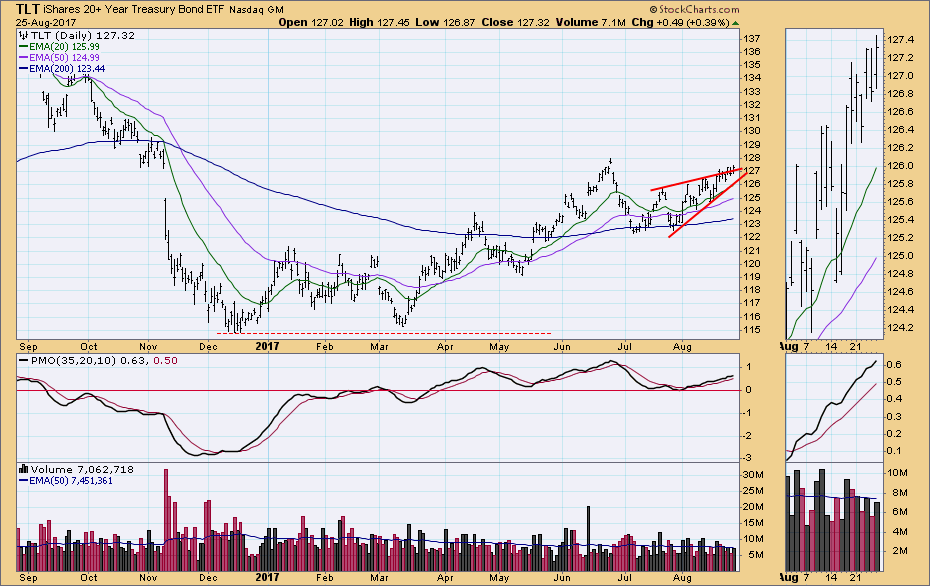 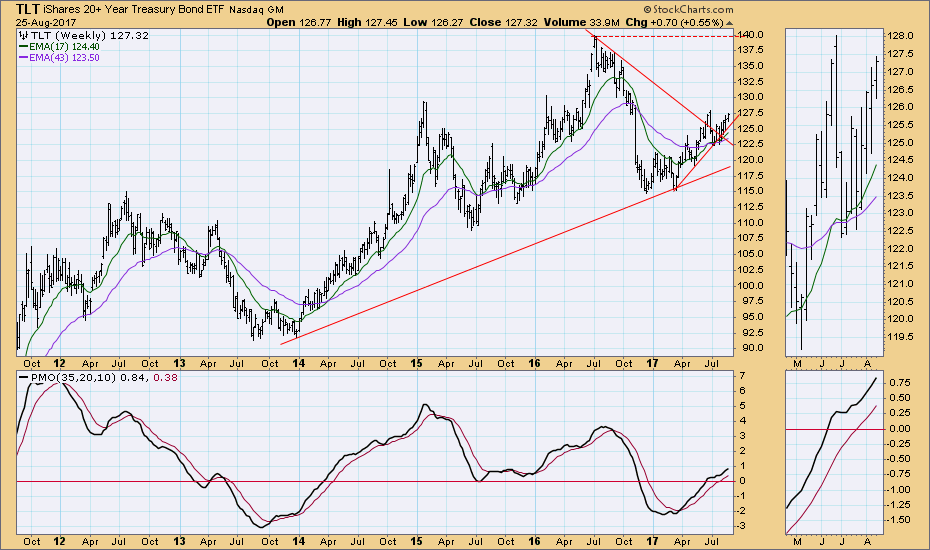