The bearish rising wedge formation we had been watching resolved upward last week, though not by a decisive margin. This week price reached, then retreated from horizontal resistance, forming a top which created a new rising wedge formation. In spite of the modest pullback early Friday, price was virtually unchanged by the close. Again, let me remind you that the very high SPX volume on Friday was associated with options expiration occurring near the end of the quarter. If there is any message there, it is buried under that avalanche. 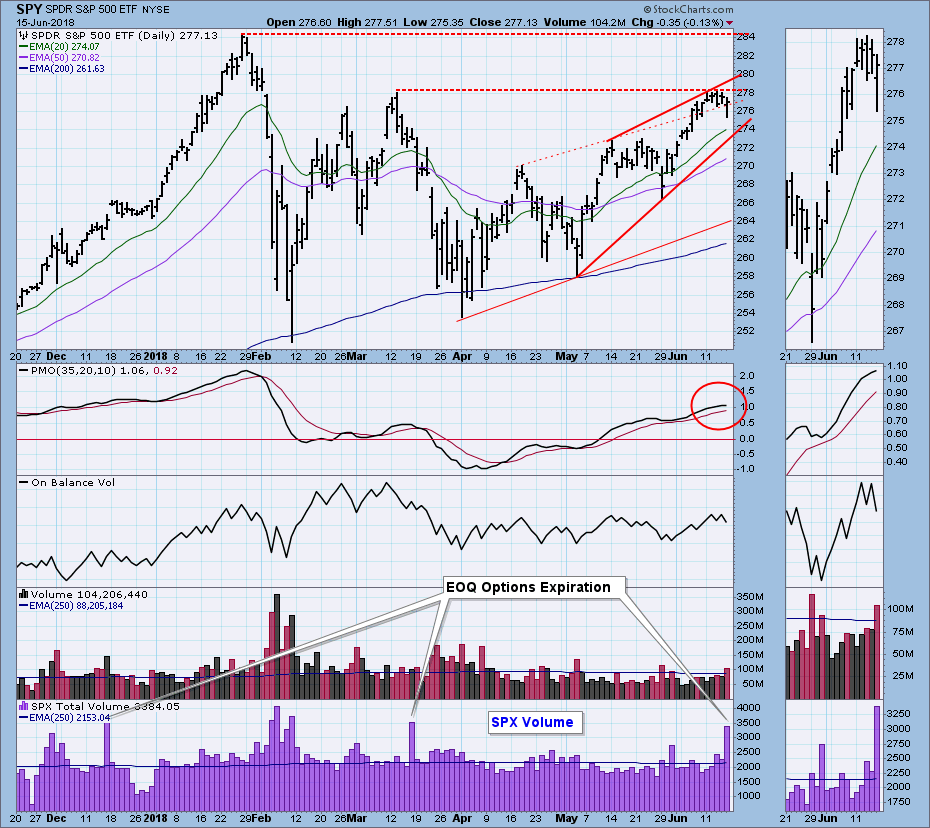 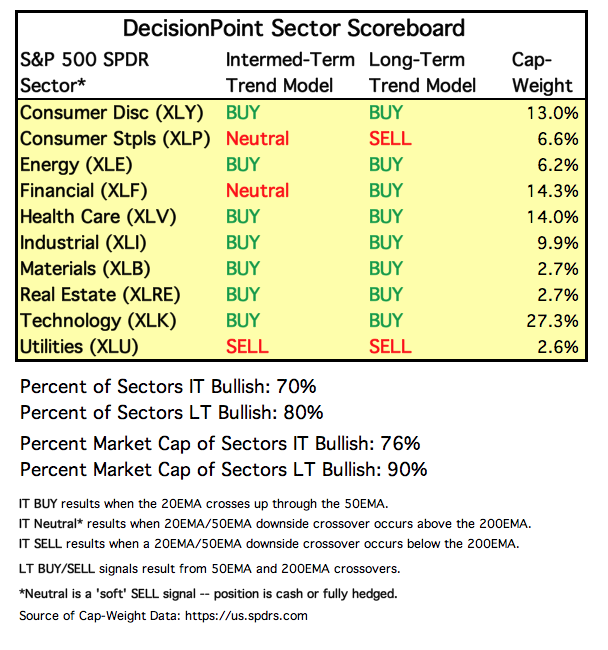 SPY Daily Chart: The daily PMO is modestly overbought, OBV does not confirm the recent top, and the rising wedge formation is bearish. 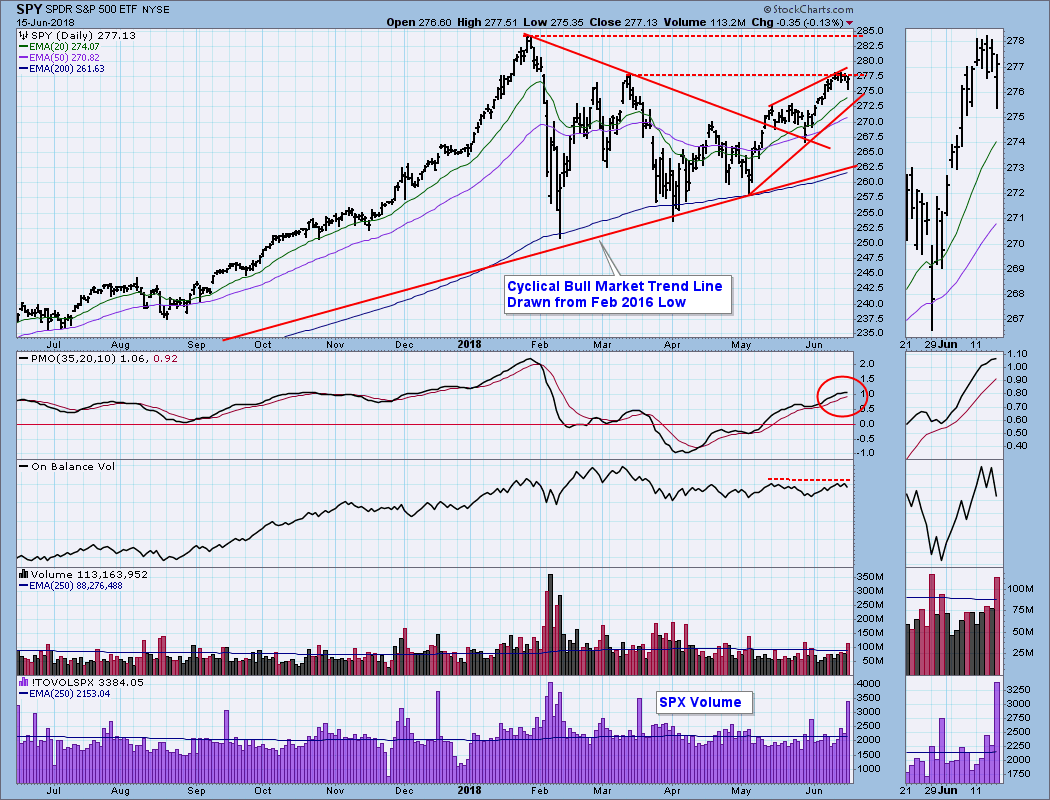 SPY Weekly Chart: The weekly PMO has bottomed, and price is still in the middle of the rising trend channel. 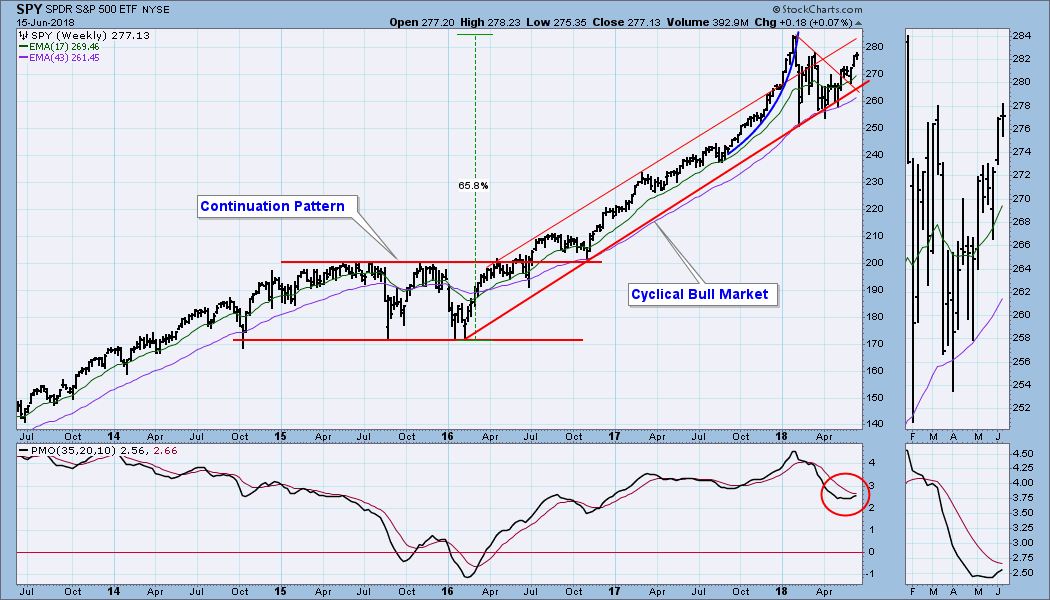 Short-Term Market Indicators: The STO-B (breadth) and STO-V (volume) are falling and are slightly overbought. 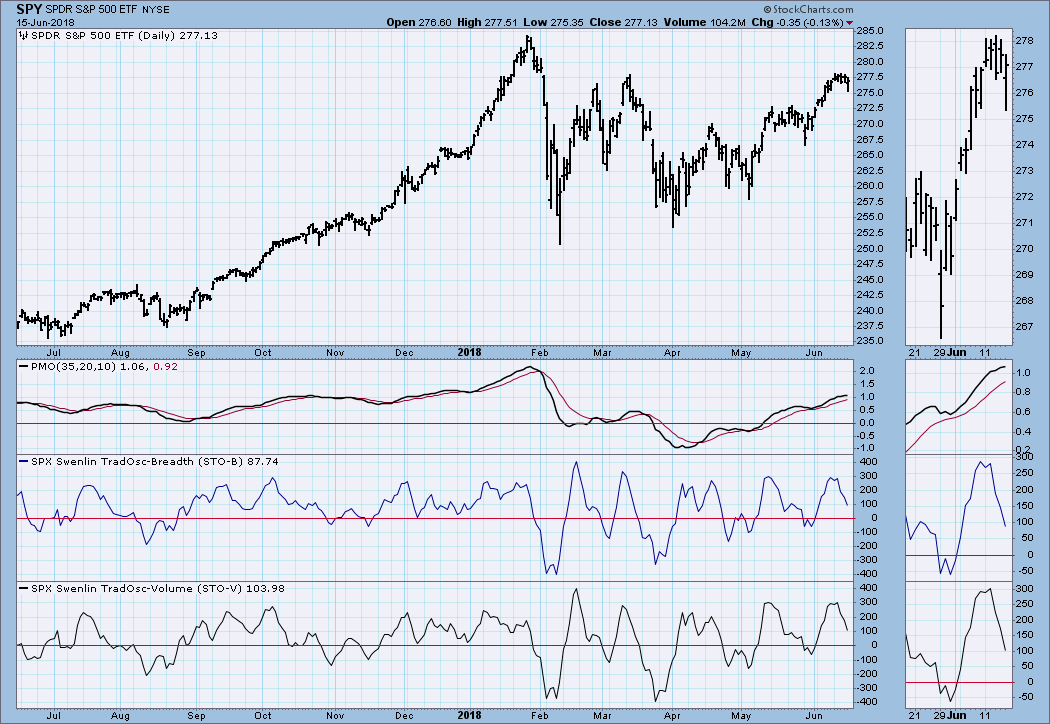 Intermediate-Term Market Indicators: The ITBM and ITVM are modestly overbought, and they have topped. The PMO is about to turn down. This is a fairly good setup for a price top. 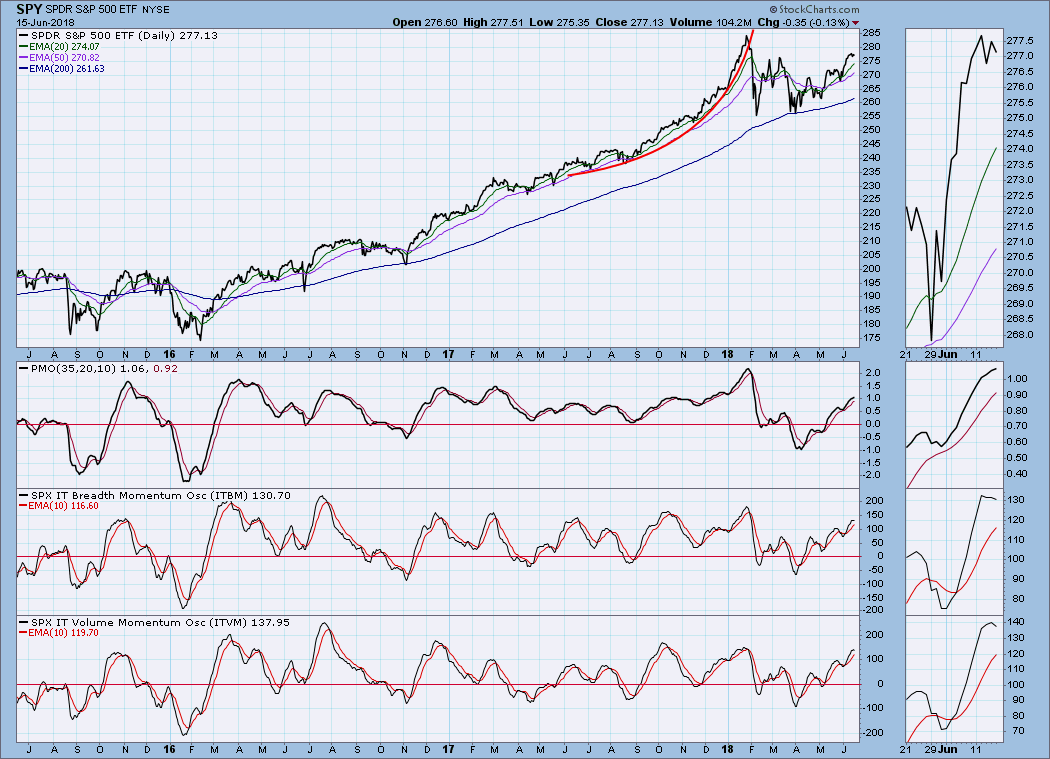 Conclusion: As I said above, we have a reasonably good setup for a price top. We actually had a top today, but so far it hasn't amounted to much. There was some selling and SPY came down less than one percent. By the end of the day selling evaporated, and today's price bar looks more like a short-term bottom than it does the initiation of a new decline. Presently, I am waiting for enough of a pullback to provide a decent short-term buying opportunity, but I am not convinced that such an opportunity is forthcoming.

UUP Daily Chart: On Thursday the European Central Bank announced plans to delay raising interest rates until late in 2019. This resulted in a sharp advance for the U.S. dollar, a move that had a negative effect on materials and commodities prices. 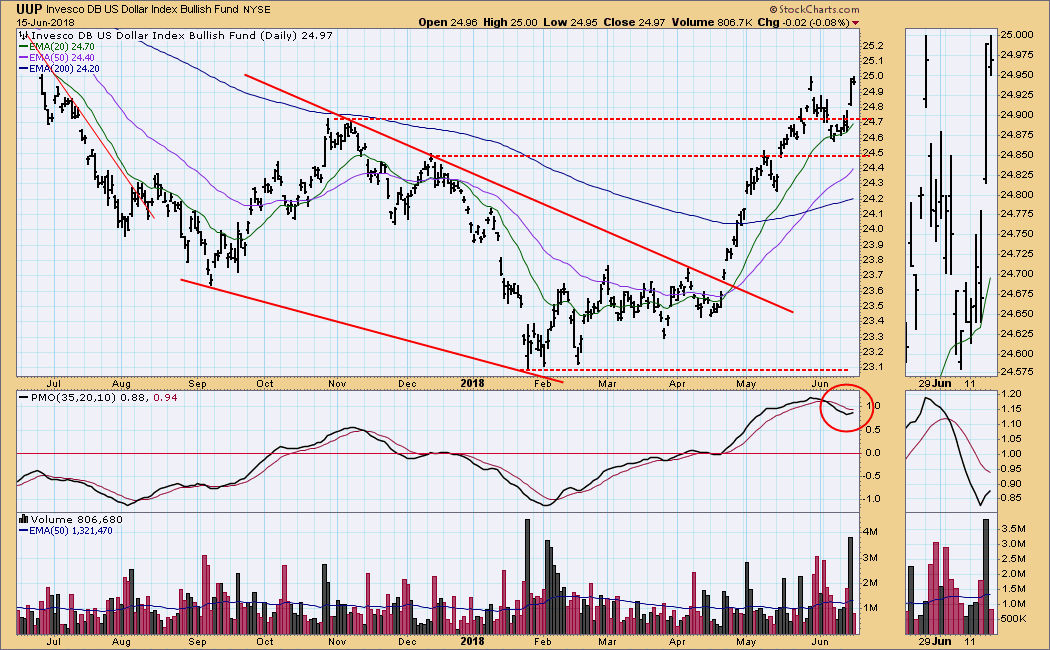 UUP Weekly Chart: In this time frame UUP looks very positive, with the 17EMA passing up through the 43EMA. While UUP's three-year trading range is a source of potential resistance, it also shows that UUP has been there before and is not breaking new ground. 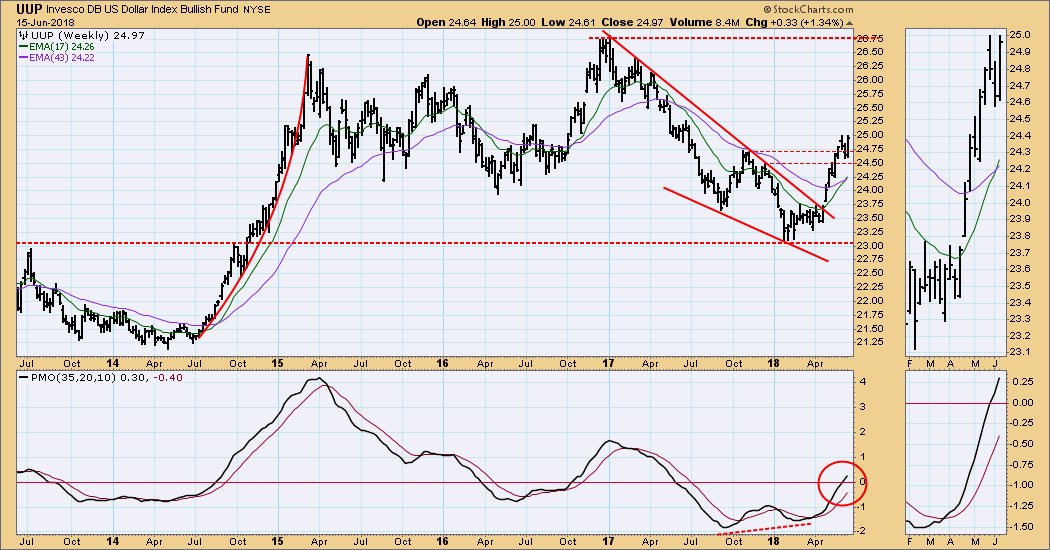 GOLD Daily Chart: Gold briefly departed from its negative correlation with the dollar, but it started swinging back in line on Friday. These periods of decoupling are usually relatively short-lived, and, unlike recently, they are usually associated with intrinsic strength in gold. Sentiment is still solidly negative. 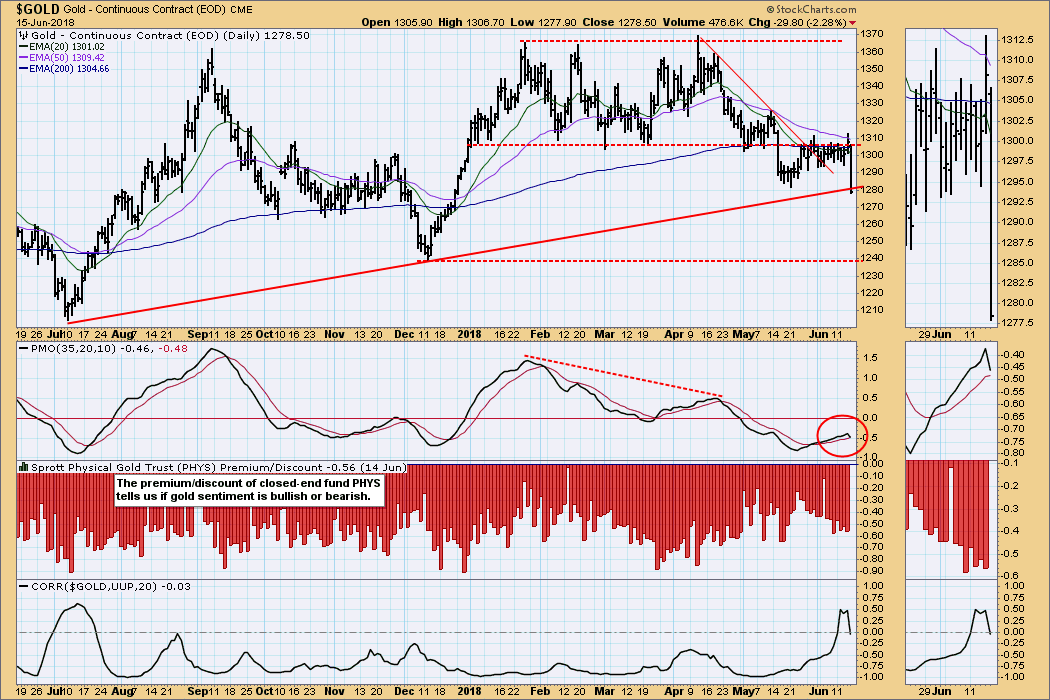 GOLD Weekly Chart: On this longer-term chart the recent dollar decouple was scarcely a bump on the correlation panel. As I have been reporting, gold still looks modestly positive in this time frame. 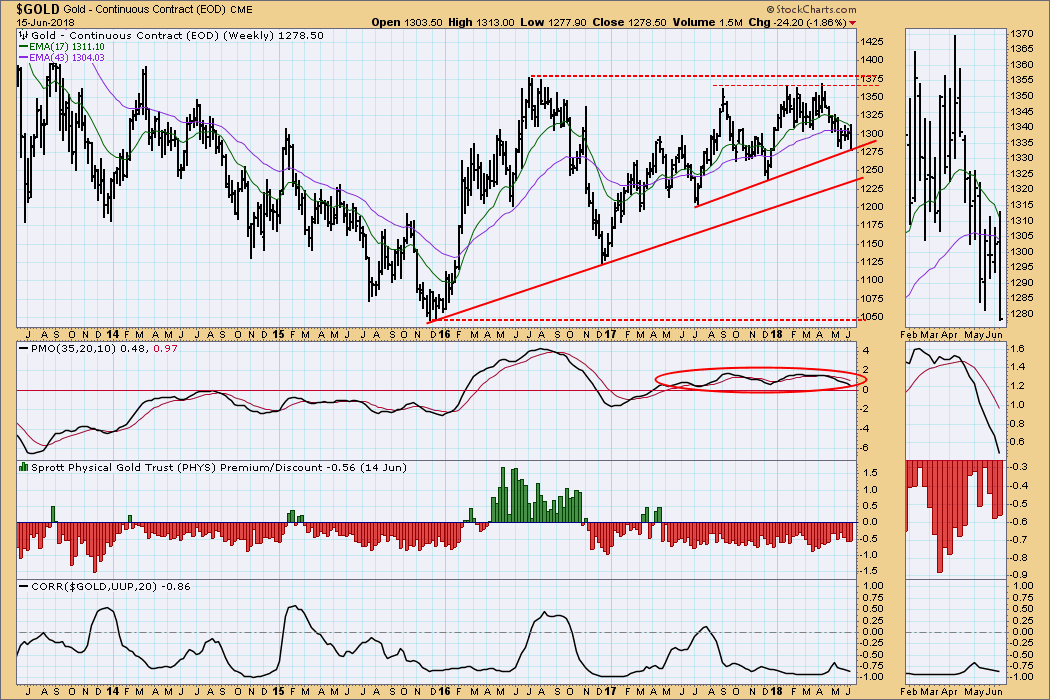 USO Daily Chart: On Friday the 20EMA crossed down through the 50EMA, generating an IT Trend Model NEUTRAL signal. At the beginning of June USO broke a rising trend line, but it was never a clean break because price continued to hug that support line . . . until it broke down on Friday. I assume that this -3.5% drop is associated with the dollar's strength. 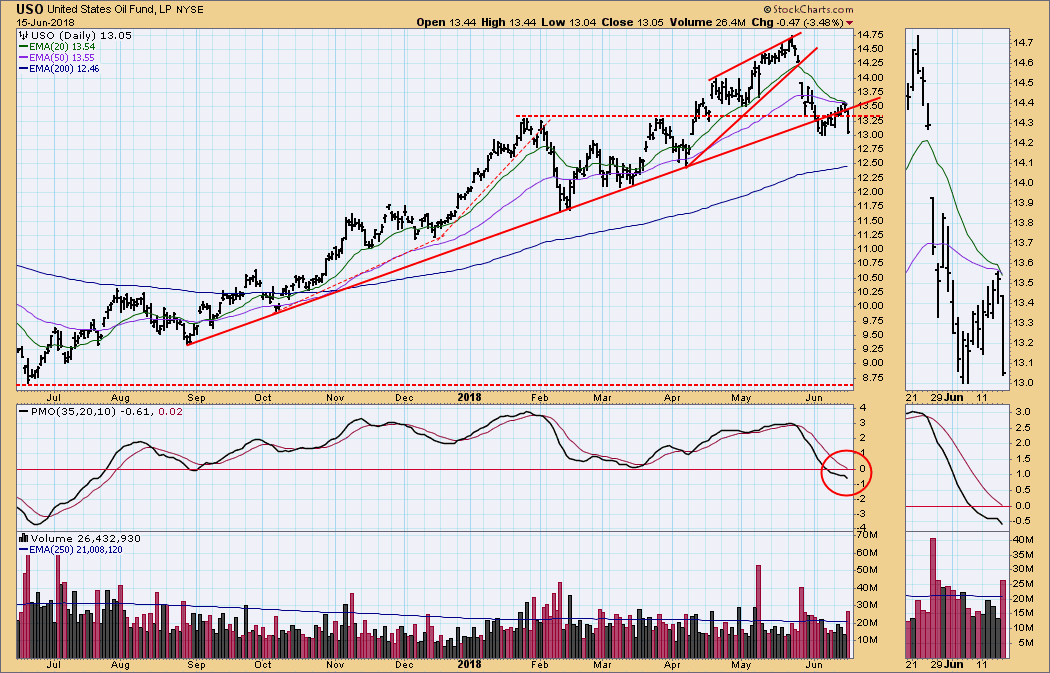 USO Weekly Chart: The weekly PMO has crossed down through the signal line, presenting a very negative picture in this time frame. The next logical support is at the top of the two-year trading range at about 11.50. 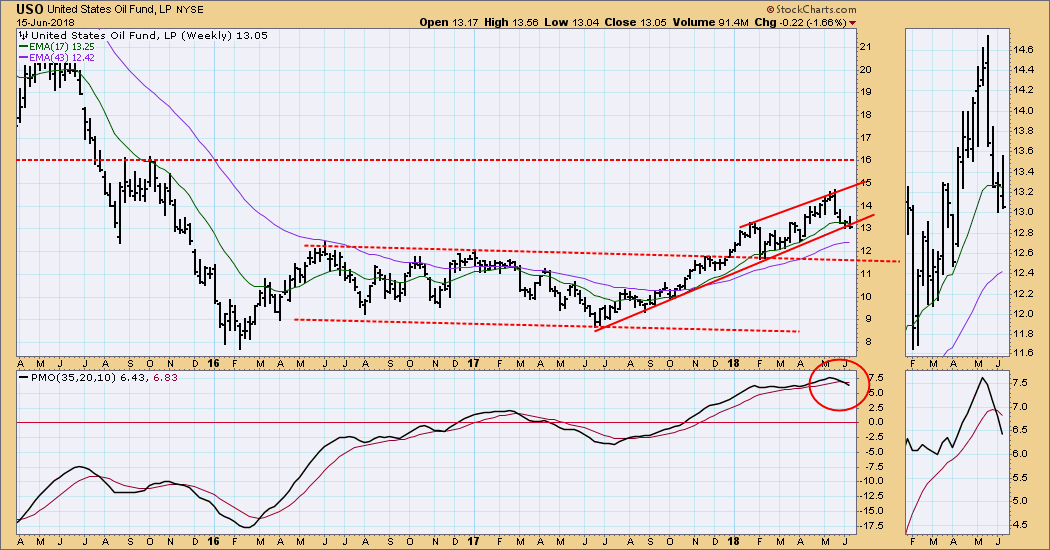 TLT Daily Chart: There has been quite a lot of volatility in the last four weeks -- a breakout, a 50% pullback, and rally continuation. The next necessary move would be a breakout from the trading range. 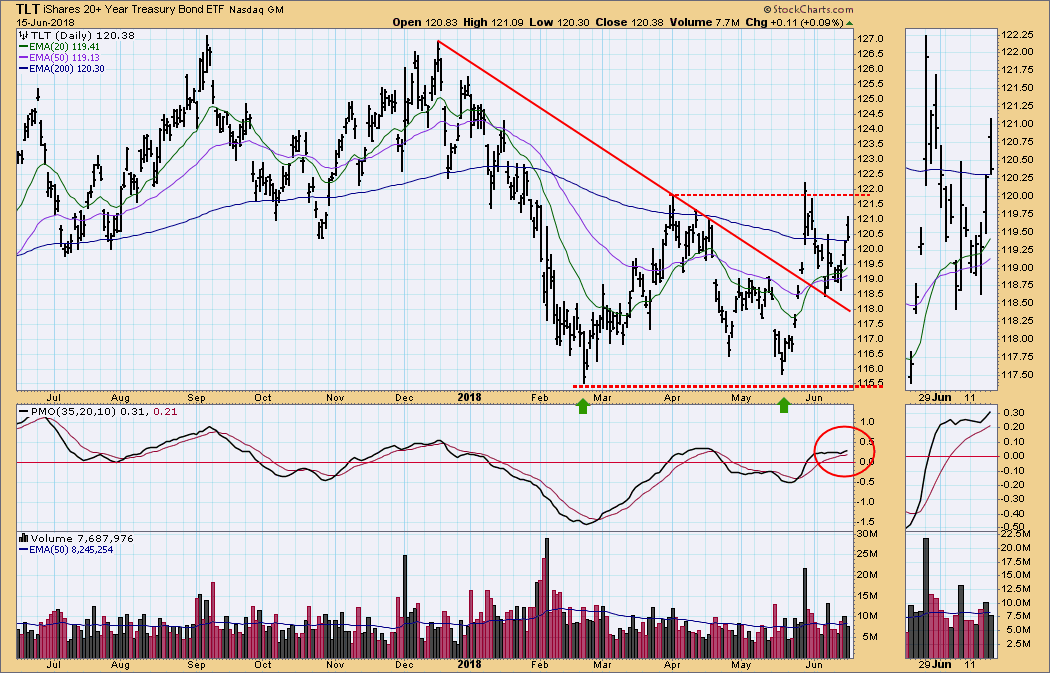 TLT Weekly Chart: The bearish head and shoulders pattern is being undermined by the bullish weekly PMO, which has bottomed and crossed up through the signal line. 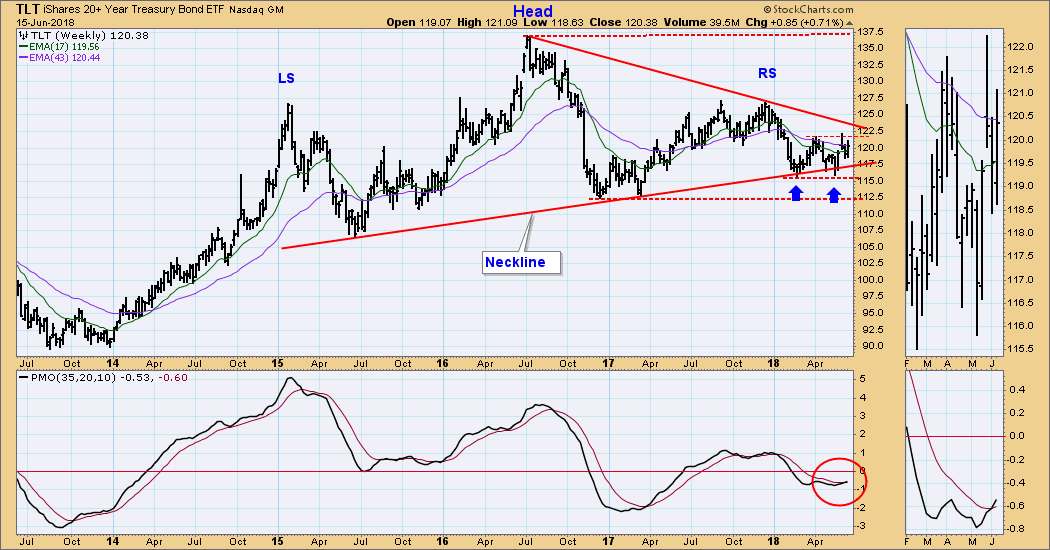