The Nasdaq 100 ETF (QQQ) is one of the weakest of the major index ETFs right now because of several large-caps within the ETF. Note that Apple (-10%), Facebook (-6%), Google (-6.5%) and Microsoft (-8%) are all down sharply this month. Amazon (+2%) is the only one of the big five that is up.  The four losers account for around 35% of QQQ and AMZN accounts for 5.5%. Weakness in these four is clearly affecting QQQ as the ETF gapped down last week and broke below its mid April low with another gap on Wednesday. Despite short-term weakness, the recent decline puts the ETF as an important juncture as the 50-day and 200-day moving averages come into play. Taken with the late March low, I would mark a support zone in the 106-107 area and an important test is at hand.

The weakness in QQQ is clearly a large-cap phenomenon because the Nasdaq 100 EW ETF (QQEW) is holding up much better. QQQ is down around 2% in April, but QQEW is flat and remains in a trading range. The chart shows Bollinger Bands in pink and the bands are the narrowest in six months. This means we have seen a volatility contraction and should expect a volatility expansion. The overall trend is still up and a break above the April highs would signal a continuation of this uptrend. I would mark support at 41.50 and watch this level for the first signs of a downside break. 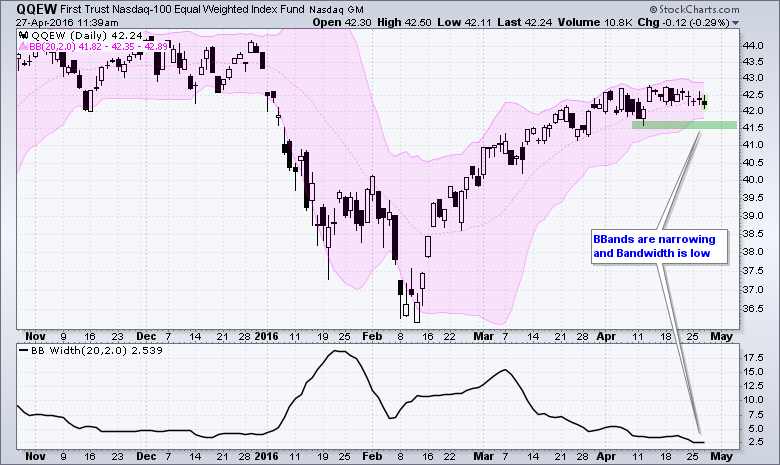