There were dozens of gaps today with most coming to the upside. Down gaps in Akamai (AKAM) and Lumber Liquidators (LL) were countered with up gaps in Apple (AAPL) and Buffalo Wild Wings (BWLD). At midday on Wednesday, the Predefined Scan results showed 22 up gaps on the NYSE-Nasdaq, and 15 down gaps on the NYSE-Nasdaq. The net is +7 for the up gaps. Chartists looking for clues on how the market is reacting to earnings can look no further than this page. More up gaps than down gaps suggests that the market is reacting positively to earnings. I will show a chart of Unisys (UIS) with a massive breakout gap after the jump.

I have not looked at the chart for Unisys in well over a year because it peaked in early 2014, underperformed throughout 2015 and ultimately moved below $10. The final nail came with a massive gap in March and the stock then traded flat the next four months. Nothing was really happening, expect maybe a basing process. Well, the stock opened today at its highest level since early March and broke resistance with a massive gap. It is hard to chase after a 25+ percent move, but this breakout looks solid and chartists may want to keep this stock on their watch-list for bullish setups in the coming weeks and months. Broken resistance in the 8.5 area turns first support to watch on any pullback. 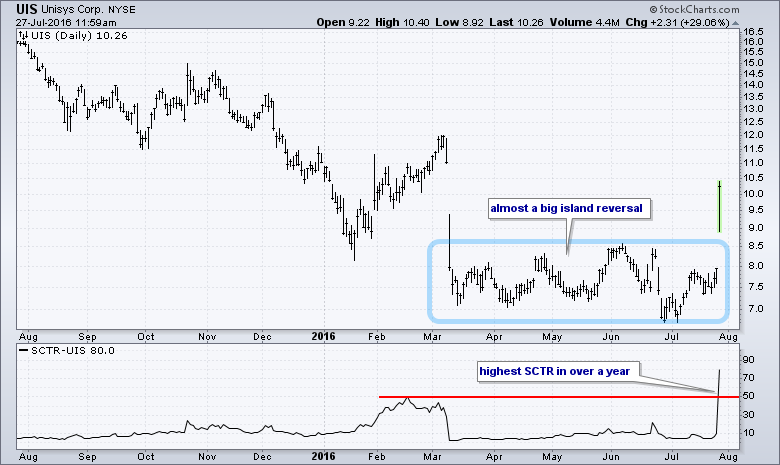