Gilead (GILD) has an interesting chart setup this week. Gilead has been bouncing while the US markets have had their worst two day stretch in a while. So let's define the chart setup and the risks.

In early December, Gilead tested below $71. The next week it rallied almost 8%. Then, while the broader markets stabilized sideways, Gilead range traded 5% week after week. In early January, Gilead tried to rally again and was stopped by the downtrend line. Now the two trendlines have a range less than $4 between them. That puts the risk setup pretty low with a great company and the price trading $50 lower than the highs and 40% off the highs. Even the great companies like Microsoft broke down to 50% off their highs in the huge bull market moves. So great buying opportunities come along if you can define your risk and get an appropriate rate of return.  With a $4 stop from here, Gilead could trade down to $68.50 before you are stopped out. An upside close on a weekly chart above $76.50 would convincingly break the downtrend. The 40 WMA at $77 have been a great line of friction on the charts so that is an overhead hurdle as well.

So far, the $71 level has held for a weekly close going back 4 months. A 4-month base is pretty significant in a defensive sector during a big bull market move.  While the biotechs have been going sideways for almost a year (IBB), Gilead has only been holding in for the last 4 months so something has changed. 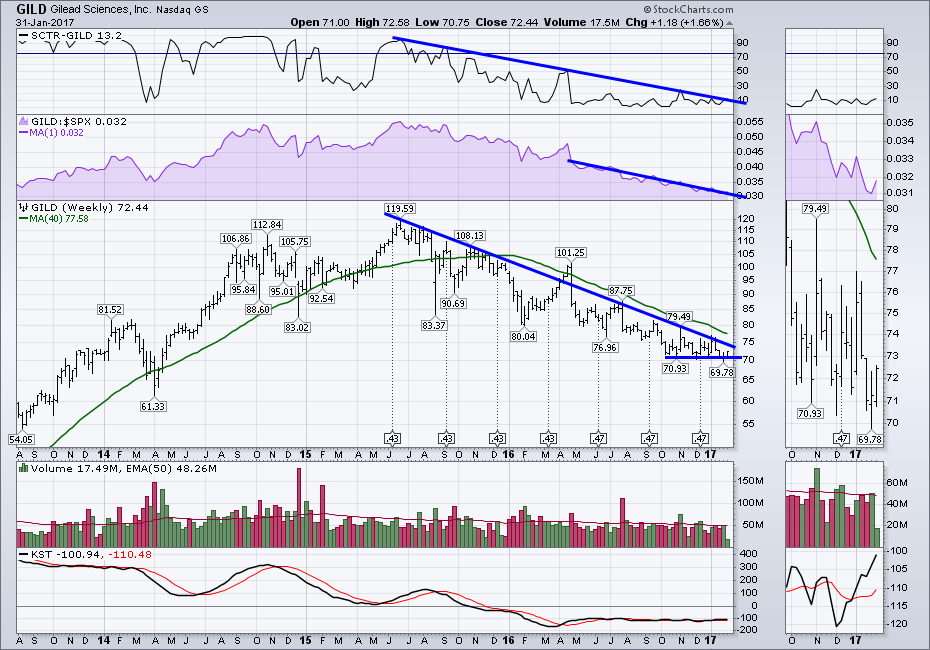 A few other interesting things to note. When Gilead started dividends, that marked the top! When Gilead increased the dividend, the stock sold off more! The yield on this Biotech stock is now 2.6%.

The volume last week was the highest volume in 6 weeks and slightly above the average. So far, there are no huge clues in the volume.

I show the KST here and it is at 6 month highs, but you could use the MACD, PPO or StockCharts PMO. They all suggest momentum is improving.

With the $SPX pulling back, and Gilead pushing up on big down market days, institutions are buying the stock here. While I usually like buying improving SCTR stocks, every now and then, one of the big names builds an investable base. Gilead is in both the S&P 100 and the Nasdaq 100. With a stop at $68.50, I like this setup.