Bull markets are comprised of rotating sector strength and bullishness.  On a relative basis, healthcare (XLV) was a laggard during 2009 and 2010 before outperforming in a major way from 2011 through 2015.  The sector saw relative weakness for nearly two years beginning in mid-2015, but has now resumed its relative strength.  In fact, I believe the breakout above relative downtrend resistance marks the very early stages of another relative push higher in healthcare stocks, particularly biotechnology stocks ($DJUSBT).  Take a look at the chart: 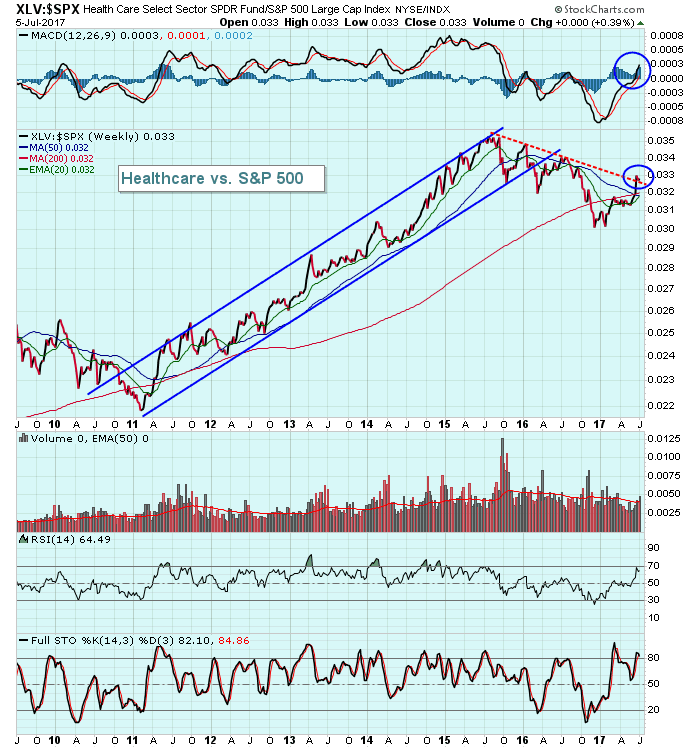 You should note a couple things here.  First, during relative downtrends, the RSI tends to swing from 30 to 60, but during relative uptrends the RSI moves from 40 to 70.  We just pushed through 60 and nearly touched 70 - a bullish development.  Also, check out the weekly MACD.  During relative downtrends, the MACD tends to remain in negative territory, while it stayed in positive territory from 2011 to 2015 during healthcare's relative strength.  The blue circles show the recent relative breakout and the bullish MACD centerline crossover.  I'm looking for more relative strength from healthcare in the second half of 2017, led by biotech shares.