On yet another day where a tweet sends the market across a 600-point range in seconds, figuring out the true compass direction is difficult. I will suggest that the steady erosion of the bank charts in this article puts the problem in the eyes of central bankers and the discussions around the coffee machine.

I worked through my bank ChartList this morning only to notice how many banks have gone below - or are threatening to take out - 5-year lows here in August. That low would be below the December 26th, 2018 low and the January 2016 low. Yeah, crazy low! The stock market was up 30% off the December low and banks are dumping below that!

As an example, here is Commerzbank (CRZBY) in Germany. This week, it tested the five-year low on the chart. 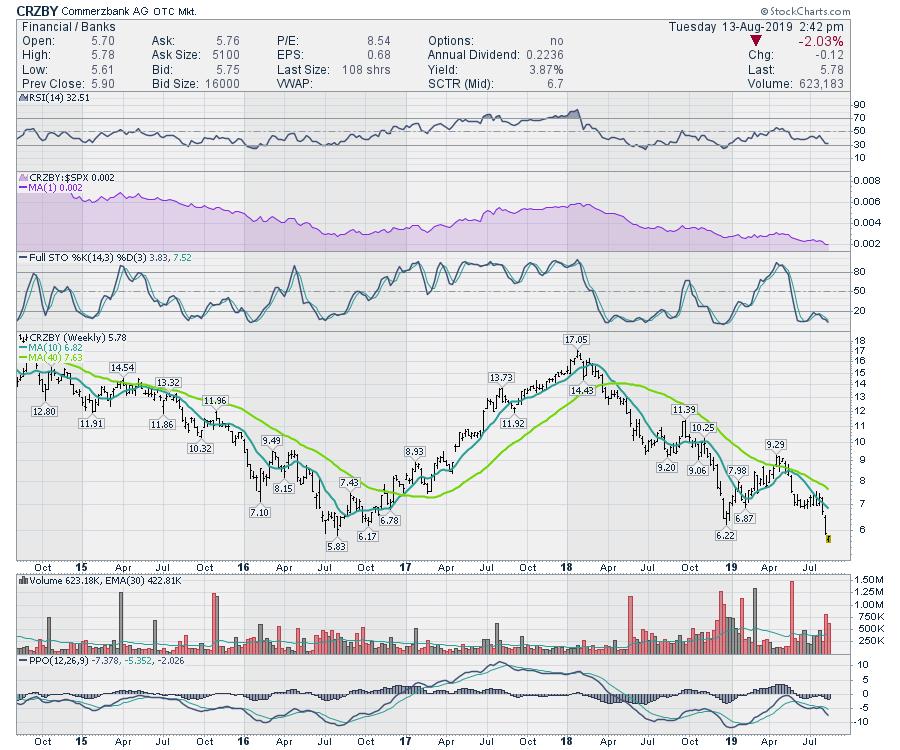 Just to add to the issue, here is Germany's other large bank, Deutsche Bank (DB). Needless to say, not very optimistic. 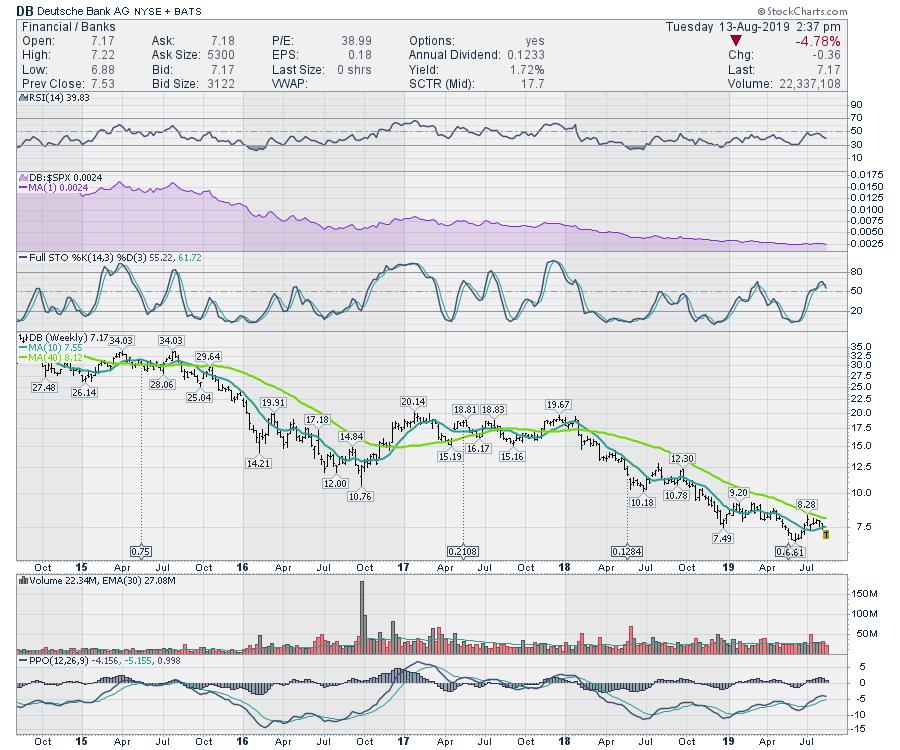 When we look at the European bank ETF (EUFN), the chart looks way better on a 5-year view, but the story for the last 18 months is about the same. The bottom line is that momentum is rolling over again following a bounce back up to zero on the PPO. 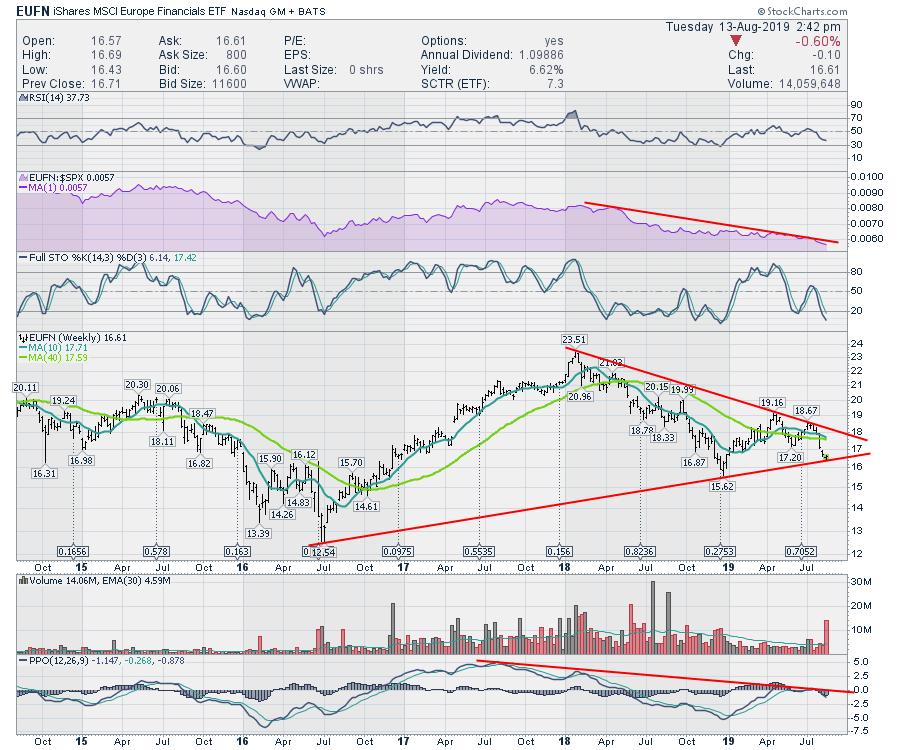 While the world waits for the ECB to do more QE Infinity, these banks are drifting lower. One of Mario Draghi's famous speeches ("Whatever it takes") happened July 26th, 2012 and sent the charts flying higher. In September 2012, the USA and most other major central banks announced a globally planned QE injection. 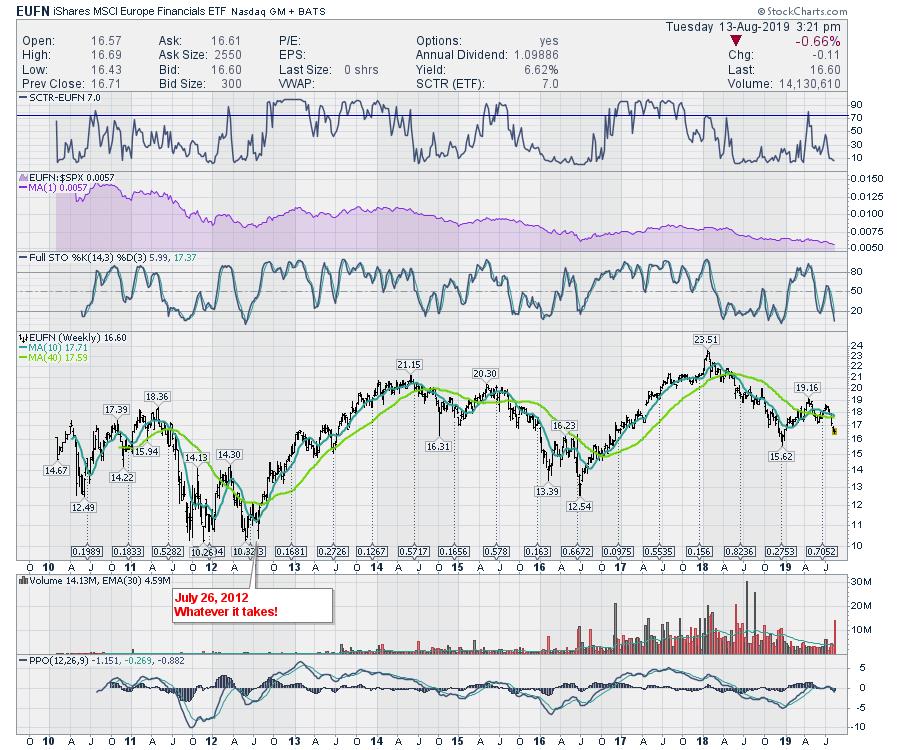 The sample bank stocks shown above are the two primary banks in Germany. However, the list is long and wide. All of the ticker symbols listed below aren't very far above the December low or 5-year lows. (Note the two US financials mentioned on the list are asset managers, not banks.) Franklin Resources (BEN) was at 52-week highs just three weeks ago; now, it sits near 5-year lows.

This is not all the banks; the names selected are from a list of 80 banks/financial stocks I created years ago. I didn't go hunting for the world's worst banks. A stock like Wells Fargo (WFC) is more than 10% above the 5-year lows. However, it has dropped more than 10% in August already.

While we all know about the world's negative interest rates, it is important to remember that banks only have deposits for a fraction of the loans handed out. When it starts to go wonky - and $14 trillion of negative debt is wonky - the bonds that back up the loans within the banks are changing in value. Should we get a shock in the the underlying assets of these banks, the change to these banks can happen quickly.

Remember in 2008, when Bear Stearns failed, the Fed had been cutting rates for 6 months prior to that. We are now entering a phase where the central banks of the world are lowering interest rates again, but the world is full of negative yielding bonds. These interest rate drops add more pressure on the banks. As we watch with amazement, it's important to remind ourselves that it isn't normal to have negative yielding government bonds. Does a problem kick in here? Will it show up in three days, three weeks or three years? I don't know if anyone watched The Big Short, but the underlying indexes didn't fall apart until the gatekeepers like Goldman Sachs saw the writing on the wall.

I don't think this problem starts in the US. I have been saying that for years. But the US experience of 2007-2009 might offer clues for when the central banks need to act. 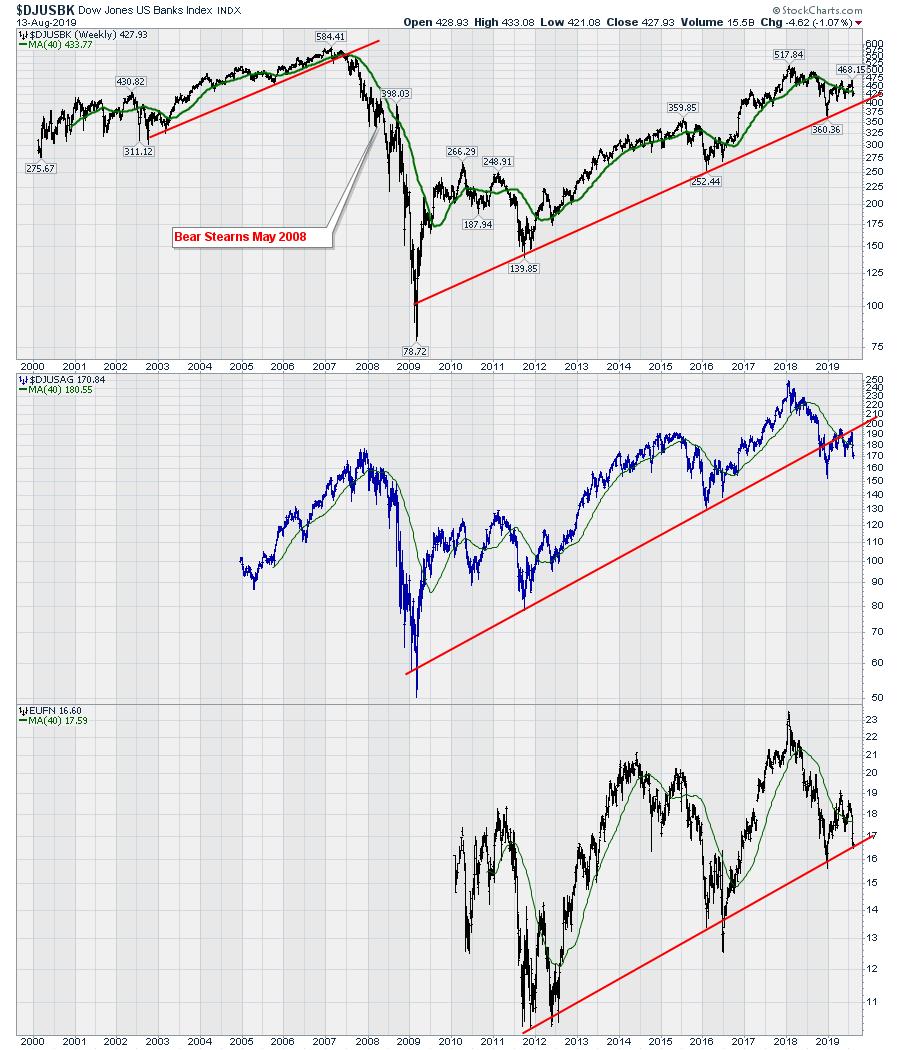 The central bankers just so happen to be having a meeting in Jackson Hole next week. The Kansas City Fed hosts the world economic policy symposium August 22-24, 2019. So, as bearish as the charts look, these trend lines are in place for a reason. Even without an announcement next week, it could set the stage for another round of QE to be announced in September. It might not change the economic backdrop in terms of commodity demand etc, but easy money is easy money and you can expect large institutional investors to follow the money!

For me, the lower chart in this article is the chart to watch. Would you be surprised if bankers and asset managers are sharing concerns like this with every central banker they meet? All this is to say: Don't Ignore This Chart! Also, don't get too bearish!