The Indian Equity Markets had a troubled week. It showed no inclination to pullback and extended its losses. The benchmark Index NIFTY50 ($NIFTY) ended the week losing 273.55 points or 2.65% on weekly basis. 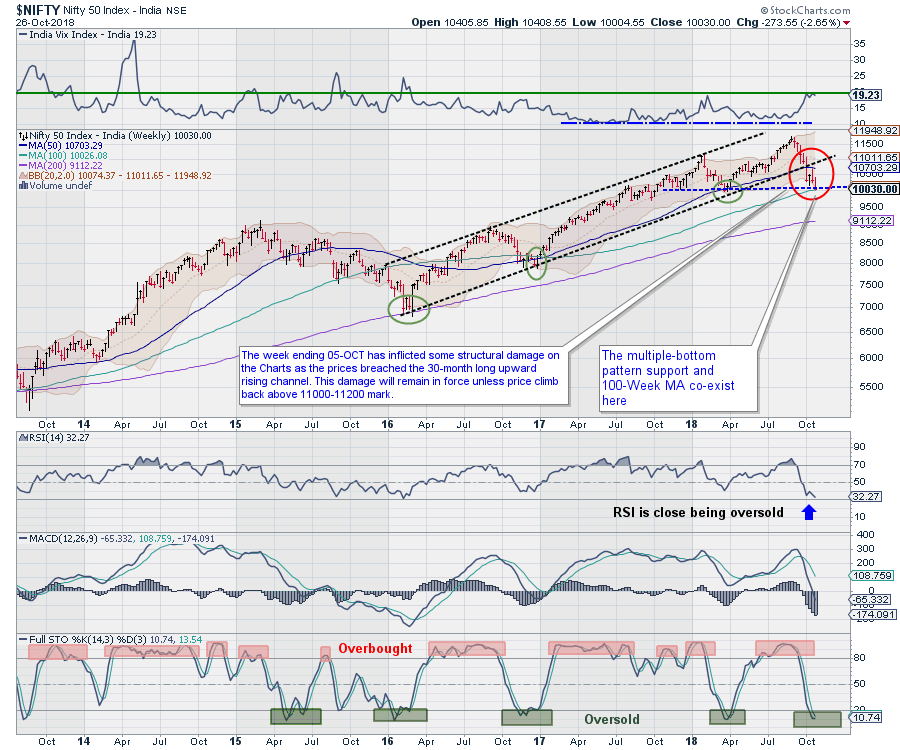 The week that ended October 05th had inflicted some structural damage on the Charts with the $NIFTY breaching its 30-month long upward rising Channel. Since then, the $NIFTY has extended its downside with a small pullback which was not sustained. In the week before this week, the Index resisted precisely at the 10700-10710 levels which was also the 50-Week MA on the Weekly Charts. In the week that went by, $NIFTY tested its 100-Week MA which stand at 10026.

As we approach the fresh week, the coming Week can almost act as a make-or-break week for the NIFTY. The behavior of the Markets vis-à-vis the levels of 10026 is now extremely important. If Markets pullback, it will avert some more serious break down on Charts. However, if these levels are not held, then not only the 100-Week Moving Average will be breached, but also the triple bottom support that the Markets hold as of now will be broken.

In the coming week, the levels of 10150 and 10280 will act as resistance levels in event of any pullback. On the downside, the supports come in much lower at 9910 and 9800 mark. The range for the Markets is likely to be broader than normal.

The Weekly RSI stand at 32.2729 and it has marked a fresh 14-period low which is bearish. It does not show any divergence against the price. Weekly MACD stays bearish while trading below its signal line. No significant formations were observed on Candles.

While attempting to take a holistic view on the Markets, there are high chances that we see a negative start to the trade on Monday owing to global weakness in the trade. However, speaking of the immediate short term, the Markets trade very close to being oversold on both time frame charts. These odds stack in favor of a pullback which may come in at any time.

On the other hand, structurally speaking, the Markets have suffered some serious damage on the Charts over past couple of weeks. In the given case, even if a pullback occurs, the sustainability of the same will be a question and there are all probabilities that it is just enough to mark a lower top for the Markets. We recommend staying away from taking any directional call on the Indices. Stock purchases, if any, should be kept extremely selective and limited to sectors which are expected to remain resilient and relatively out-perform the general Markets. Extremely cautious view is advised for the coming week.

In study of Relative Rotation Graphs, we compare various sectors against CNX500 which represents over 95% the free float Market cap of all the stocks listed.

There are couple of things worth taking note of on the Relative Rotation Graphs (RRG). Despite remaining in the leading quadrant, the Energy pack has continued to rapidly lose momentum. Also, the CNXIT, which is also in the leading quadrant is seen stalling its up move. Further, lack of momentum is also seen in FMCG and consumption pack. The PSUBank Index continued to rapidly lose momentum and has now moved to lagging quadrant. On the other hand, Pharma is likely to continue with its resilient performance over coming week. Joining the company is the Metal Index which has now entered the leading quadrant. Also, a noticeable improvement is seen in the INFRA and Media pack on the momentum front and are expected to relatively improve its performance over previous week. No major show is expected from BankNIFTY, Auto pack and services sector along with NIFTY Junior (Nifty Next50) pack as a whole.

Important Note: RRG™ charts show you the relative strength and momentum for a group of stocks. In the above Chart, they show relative performance as against CNX500 (Broader Markets) Index and should not be used directly as buy or sell signals.