The Volatility Index, more commonly known as the VIX, is a measurement of market's expected volatility in the future. Analysts and investors alike look at this tool to measure sentiment while making investment decisions. The VIX reflects the psychology of market participants' fear and greed and is often referred to as "Fear Gauge" or "Fear Index." 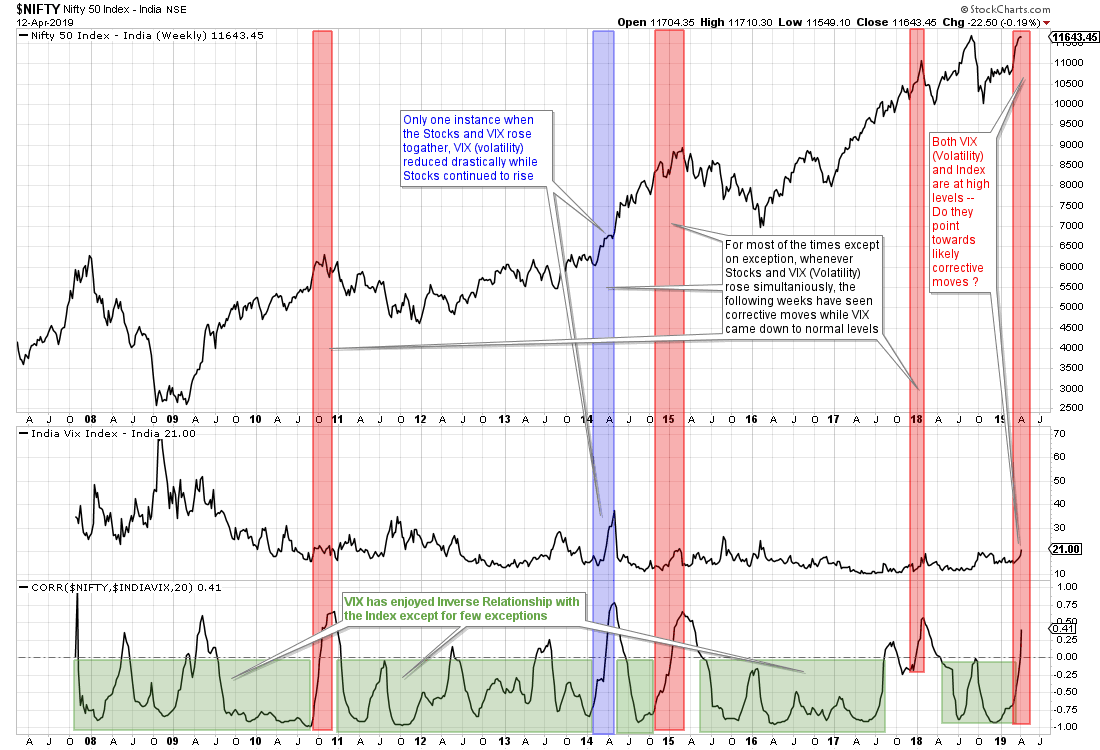 The correlation between Indian VIX and the benchmark NIFTY50 is typically negative. We would always find VIX at low levels when the index is at its high point and VIX at high levels when the markets are trying to find a bottom.

The chart shown above is the weekly chart of the NIFTY50 Index plotted along with the VIX. The last section of the charts shows noticeable correlation between the NIFTY and VIX.

It is evident that, for the majority of the last decade, NIFTY has typically seen a strong negative correlation with VIX, which is quite normal. However, over the past couple of weeks, we have seen this historical negative correlation thrown off-balance, as both NIFTY and VIX are rising together and the correlation between the two has turned strongly positive.

Though it is difficult to pinpoint exact number of occurrences of such an event due to the volatile moves VIX gives, we found 5 such occurrences, including the present one, wherein the correlation between NIFTY and VIX became strongly positive because they moved up together.

We'll exclude the present occurrence as it has not concluded yet. But if we examine the past 4 occurrences, it was only once, in 2014, that both Stocks and VIX rose; VIX came down sharply as volatility decreased while the Stocks continued to inch higher.

In case of remaining 3 occurrences (2010, 2014-15 and 2017-18), both Stocks and VIX rose together. But when the VIX declined and volatility decreased, they also brought down the Index along with them and the markets saw corrective moves that range from approximately 3% to 8%.

Conclusion: Over the past couple of weeks, we have seen VIX and NIFTY rising together. If we try and take few clues from history, Volatility (VIX) is definitely likely to come down over coming weeks. It is also very likely that the VIX will bring the NIFTY down along with it, unless there is an exception like in 2014. The only caveat there is that, like 2019, 2014 was a general election year. Apart from this, however, the NIFTY is always prone to undergo corrective moves whenever it has defied its inverse relationship with VIX.