In a week that turned dramatic on the last day, the markets that were over 3% down through the week pulled into positive territory in one single session. On Friday, the headline index saw its highest-ever single-day gain, ending 5.32% higher. The pronounced shift in the trend came in a reaction to the Finance Minister announcing hefty corporate tax cuts, doing away with the enhanced surcharge on the capital gains tax (including the derivatives by the FPIs) and scrapping the tax on buyback of shares prior to July 05, 2019. 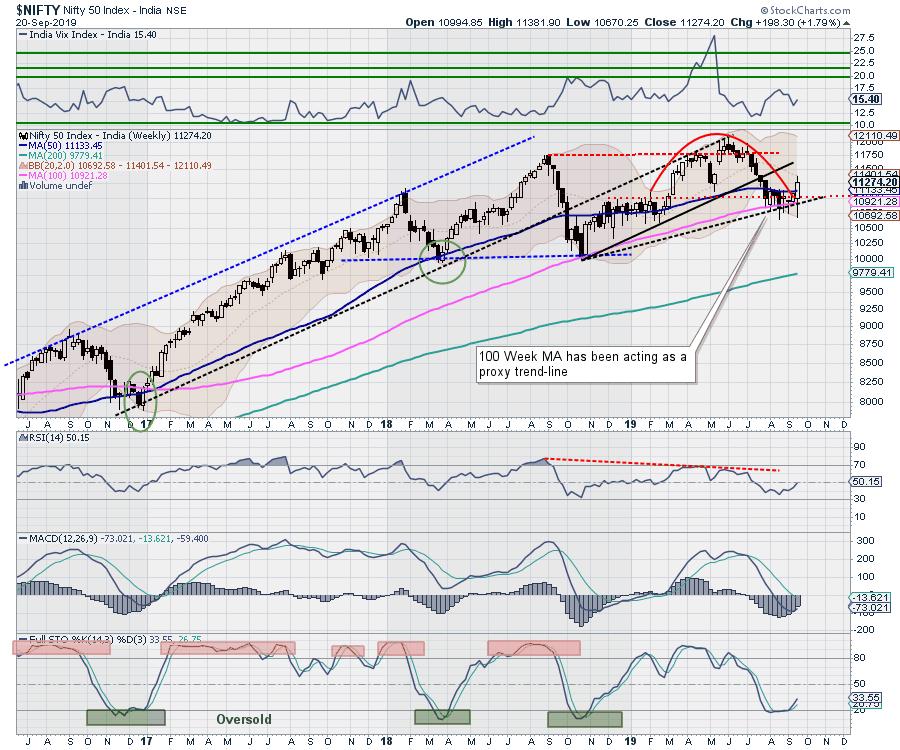 These announcements were seen almost as a quasi-budget-like event, and the markets reacted with a monstrous short-covering rally, taking the NIFTY higher by over 600 points at one point in time. After mildly coming off from the highs, the NIFTY ended the week in positive by gaining 198.30 points (+1.79%).

The move, which has made the Indian tax rates one of the most competitive in the world, is being touted as a very bold move and solid attempt in resetting the economy, which has been flagging of late over the past couple of quarters. It would be more meaningful to examine how the current move has attempted to alter the technical landscape of the markets.

The strong one-way up-move that occurred on Friday was nothing but the result of a ruthless short-covering in the markets. Another interesting point to note: the FII just bought a measly net Rs. 35 Crores worth of equity in the Cash Segment, but it was DIIs who bought stocks worth Rs. 3000 Crores and propelled Friday's rally. Hopefully, if this move has to sustain, we will require buying by FIIs, who have otherwise dumped stocks worth 4.5 Billion USD over the past couple of weeks.

The start to the week is likely to be volatile; there may be some cooling off in the markets, as some profits may be booked and contents of the announcements are digested fully. The levels of 100-Week MA, which currently stands at 10921, will remain the most crucial support point now in the event of any consolidation in the markets.

The weekly RSI stands at 50.15; it stays neutral and does not show any divergence against the price. The weekly MACD continues to remain bearish while trading below its signal line.

Looking at the pattern analysis on the weekly charts, the NIFTY has not only held the 100-Week MA, but has crawled above the 50-Week MA as well and survived the breach of the neckline following the rounding-top formation.

The announcement of the fiscal stimulus has not included any demand boosters as yet, though the likelihood of them being announced cannot be ruled out. As of now, they are absent. Further, as a consequence of the stimulus, the Government has forgone the amount of Rs. 1.45 lakh crore as revenue on an annualized basis. This may, in all probability, increase the fiscal deficit by 30-to-40 basis points.

It is very likely that we'll see some cooling down of exuberance; if not, chasing of the overheated markets may be risky. The previous week's high of 11381 and the 20-Week MA, which is currently at 11401, may be an important zone to watch. A rally may get extended if NIFTY moves past and sustains above these levels.

There are higher chances of some profit-taking at current levels. Even in the event of the rally being extended or some profits being taken, the Consumption, FMCG and IT will remain at the forefront and are expected to relatively outperform, as indicated by Relative Rotation Graphs (RRG). We recommend not chasing the move from now on blindly, as it may be hazardous to do so. A cautious view is advised while keeping overall exposures at moderate levels and protecting profits at higher levels.