As I complete this weekly technical note, I have just wound up the inaugural CMT India Summit at Mumbai yesterday. Insights shared by the Association's co-founder Ralph Acampora, Martin Pring and Julius de Kempenaer were the key takeaways of the event.

Coming back to the markets, although they continued to trade on the expected lines, they ultimately headed nowhere during the past week and ended on a flat note. The markets never really saw any directional move, remaining within a defined range throughout the last week. Having oscillated back and forth in a capped range, the headline index NIFTY ended with a marginal gain of 18.95 points (+0.16%). This was the third week in a row that the NIFTY has not been above to move past its crucial resistance area. 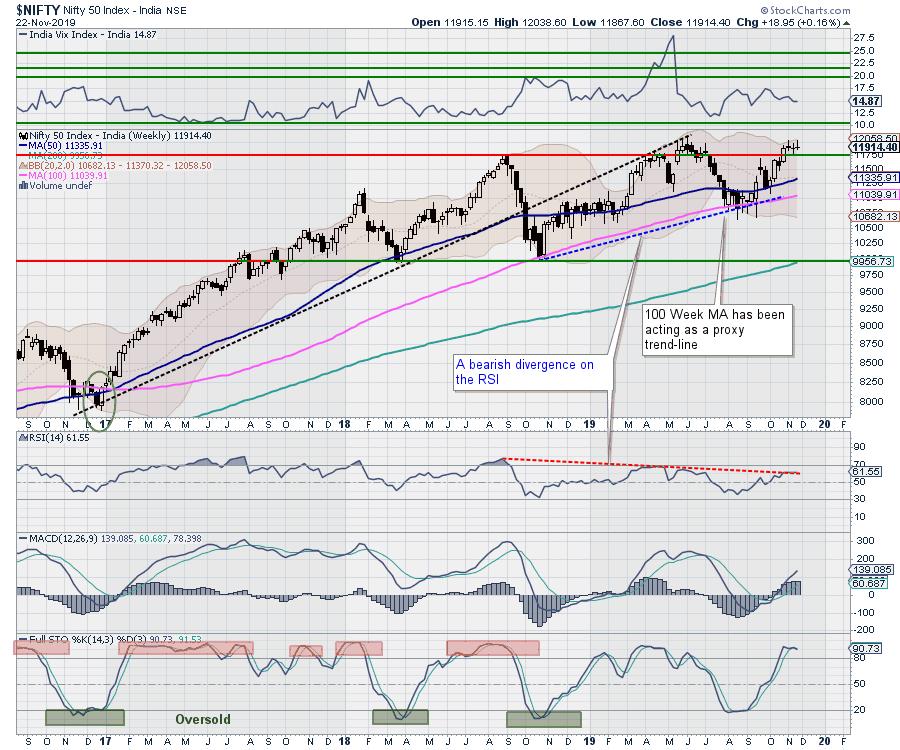 The coming week faces a similar set of technical challenges to those of the past couple of weeks. The negative divergence on the RSI has not resolved and continues to exist. The zone of 12000-12100 has not been taken out; this zone will also continue to post stiff resistance to the markets over the coming days. The NIFTY has been showing evident signs of fatigue and exhaustion over the immediate short term.

The India VIX has further cooled down by 1.05% to 14.87. The coming week is likely to see a muted start; the index is expected to face stiff overhead resistance near the 12000-12100 zones. While the aforementioned area is expected to offer stiff resistance, the supports will come in at the 11850 and 11700 levels. The range for the markets may get wider than usual if the NIFTY gets into some corrective moves.

The weekly RSI is 61.87; it shows negative divergence against the price. While NIFTY formed a fresh 14-period closing high, the RSI did not. The weekly MACD remains bullish and trades above its signal line. On the candles, a Doji with a long upper shadow occurred. The occurrence of a candle like Doji or a long upper showdown during an uptrend has the potential to stall the current trend. Though this would require a confirmation on the next bar, the NIFTY looks vulnerable at current levels, as similar candles have emerged over three consecutive weeks.

Going by the pattern analysis, though the market has not shown any breakdown on the charts, it has undoubtedly stalled its uptrend. The zone of 12000-12100 has become a crucial resistance zone for the market, and the loss of momentum is evident around this zone.

Presently, there is no bearish move on the charts as yet. However, the loss of momentum has been of concern at current levels. The NIFTY has halted its up move at the moment. It would be interesting to see whether the markets are just taking a breather while consolidating in a range or preparing for some corrective steps.

We recommend continuing to stay light on positions and avoid over-leverage so long as NIFTY continues to consolidate in a range. There is high probability of some corrective moves if the overhead zone of 12000-12100 is not taken out soon. Until a directional call is established, we suggest continuing protecting profits on either side. A cautious view is advised for the coming week.

Our review of Relative Rotation Graphs (RRG) shows that the FMCG and the Consumption groups are in the process of topping out. They appear to be steadily losing momentum while remaining in the leading quadrant. The Auto and Energy packs remain firmly placed in the leading quadrant and are likely to relatively outperform the broader NIFTY500 Index.

A strong rollover is also seen in BANKNIFTY, which has moved into the improving quadrant on the back of steady improvement in its relative momentum. Giving the BankNifty company is the Metal group, which is placed in the improving quadrant. The small-cap and PSE groups have stalled themselves over the past weeks.

The IT index has continued its mover further into the lagging quadrant. This sector is unlikely to post any good performance over the coming week. While the PSU Bank has steadily improved its relative momentum, it still has some distance to cover while it completes its bottoming out process. No major show is expected from the Infrastructure and the Realty packs.