In what remained one of the worst weekly and monthly performances in recent times, the Indian equity markets witnessed heavy profit-taking throughout the week. The markets had a phenomenal run over the previous months; however, over the past week, it had shown some signs of taking a breather. The past few days witnessed relentless profit-taking and the trading range remained much wider on anticipated lines. The Index traded in a wide range of 895-odd points, and the headline index ended with a net loss of 737.30 points (-5.13%) on a weekly basis. Even on a monthly note, the NIFTY came off by 347.15 points (-2.48%). 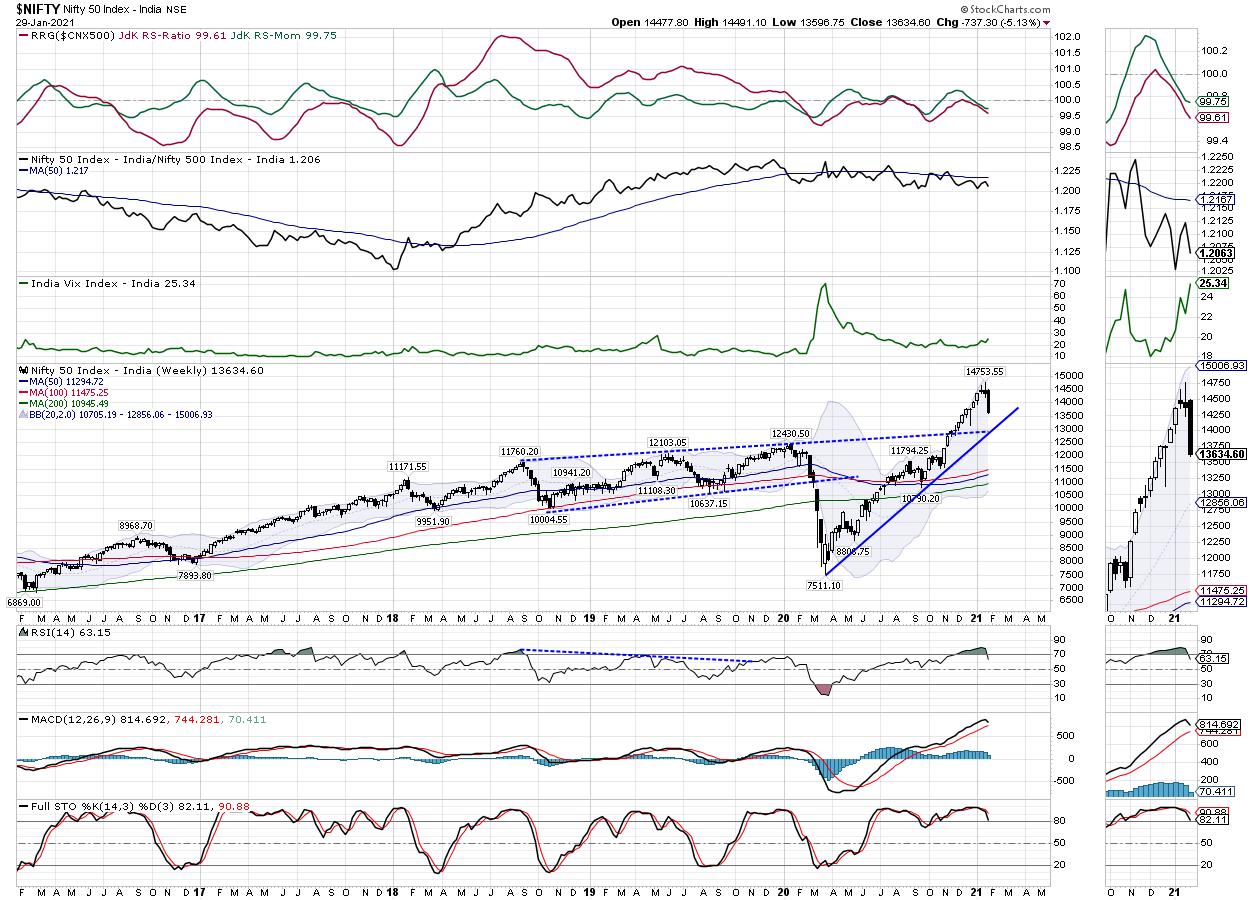 We approach one of the most important domestic external events, with the Union Budget slated to be presented on Monday. That being said, if we look at the past data, we have seen one of the worst performances ahead of the Union Budget in the last 15 years. If we look at this thing from a different angle, the NIFTY has come off around 1150-odd points from its high point, leading to a near-vertical decline from those levels. This has made sure that the markets are approaching the Budget on a noticeably light note.

The slightest of any positive development will see sharp pullbacks. In the same breath, any flirting with the STT, or LTCG, or any cess in the name of the COVID, or any such expenditure that may be viewed as wastefully increasing the fiscal deficit, will not be taken in a good way by the markets. The volatility spiked over the previous week as the INDIAVIX moved higher by another 13.02% to 25.34.

The weekly RSI stands at 63.15; it has moved below 70 from an overbought area, which is bearish. It remains neutral against the price. The weekly MACD is bullish and is above its signal line; the narrowing slope of the histogram suggests a decelerating momentum. A large black candle occurred following two candles that were spinning tops and one with a large upper shadow. The occurrence of such a candle near the high point suggests a likely reversal; it has marked the zone of 14650-14750 as an intermediate top and strong resistance zone for the markets.

The pattern analysis makes it very evident that the markets had deviated too much away from their mean. Even the shorter 20-week MA is presently at 12856; currently, it is near the green rising trend line that the NIFTY penetrated to achieve the breakout. This shows the extent of deviation from the mean that had occurred over the past many weeks.

It is an obvious fact that the budget is likely to infuse volatility on either side. It is, in a way, relatively good that the markets are not so long-heavy as they approach the budget. While it may not be possible to precisely predict what may lay in store for the markets on Monday, they may see some upsides if there is an absence of any major negative proposals.

However, from a larger perspective, the more concerning thing is the signs that point towards a likely end to the prevailing risk-on setup, as reflected by global asset allocation suggested by the RRG. In the given context, and while taking into account the present technical setup, we strongly recommend chasing any up moves, if there are any on the budget day and after that. There may be short-term momentum on either side, but it would be more rewarding from the risk-return perspective to stay invested more in the low beta and defensive stocks. A cautious approach to the week is advised. 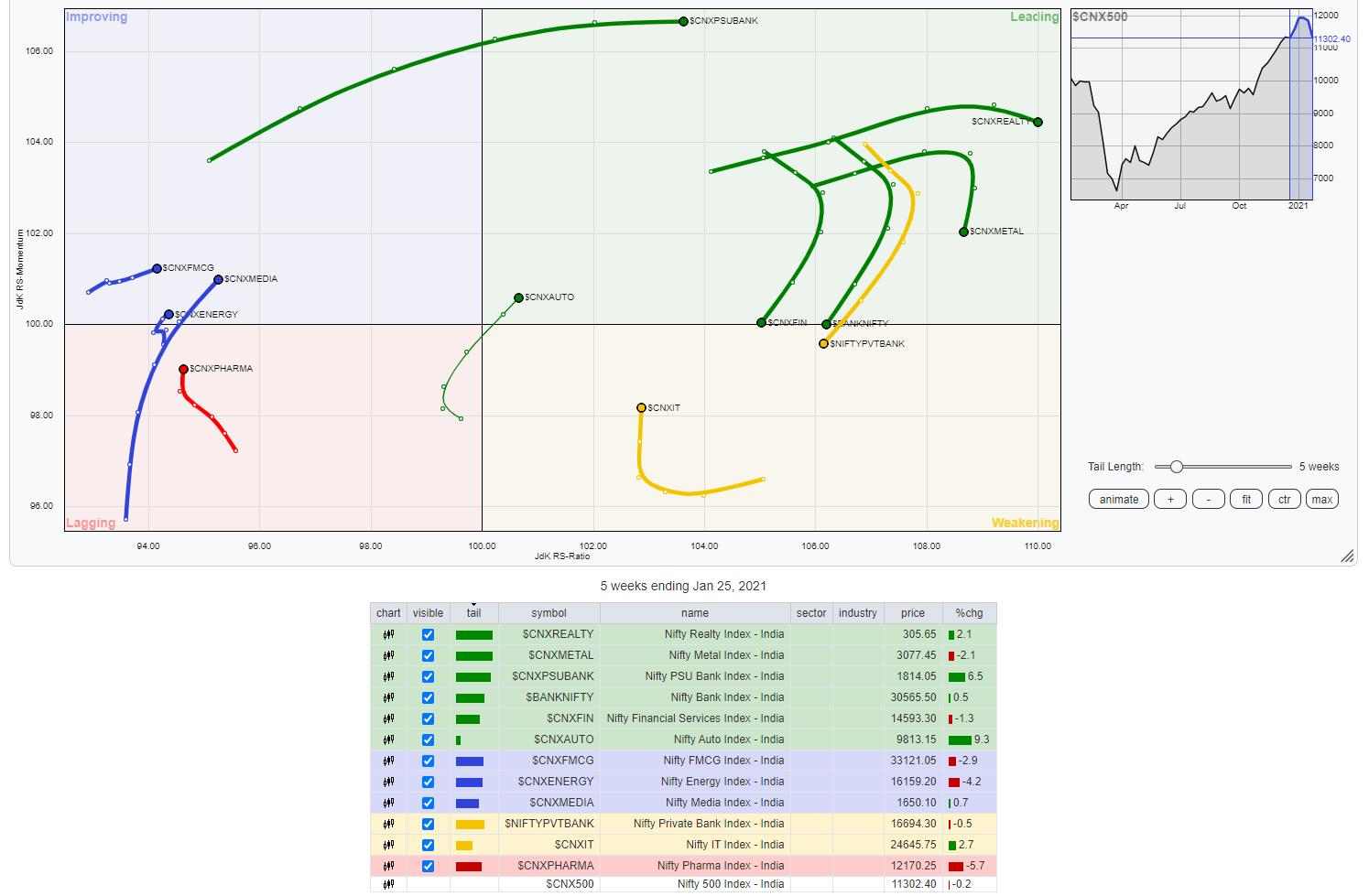 The review of Relative Rotation Graphs (RRG) shows that, continuing on the trend that was seen over the past two weeks, the NIFTY Financial Services Index, Commodities, BankNifty, and Services sector Indexes are about to cross over inside the weakening quadrant, indicating a likely end to their relative outperformance against the broader NIFTY 500 Index. The NIFTY Metal Index is also seen taking a breather. The only two indexes that are firmly placed inside the leading quadrant are the PSU Banks and the Auto Index. These are likely to relatively outperform the broader NIFTY 500 Index.

The IT index is the only index inside the weakening quadrant; it is showing a sharp improvement on the relative momentum front.

NIFTY Pharma is the only index that is inside the lagging quadrant; it is also improving on its relative momentum front. However, it is yet to complete its retracement and consolidation process that started after it tested its recent peak.