In a week where the trading range remained wider than usual, the Indian equities took a serious cut on the Friday's session; however, they managed to close the week on a positive note. In the previous weekly note, it was mentioned that the NIFTY was trading inside the falling channel that it had created; any decisive move above 15000 would give an upward directional cue to the markets. However, the Index failed to move past that point and stayed inside the channel. Following a wide-ranging week, the headline index finally ended with net gains of 289.75 points (+2.02%) on a weekly basis. 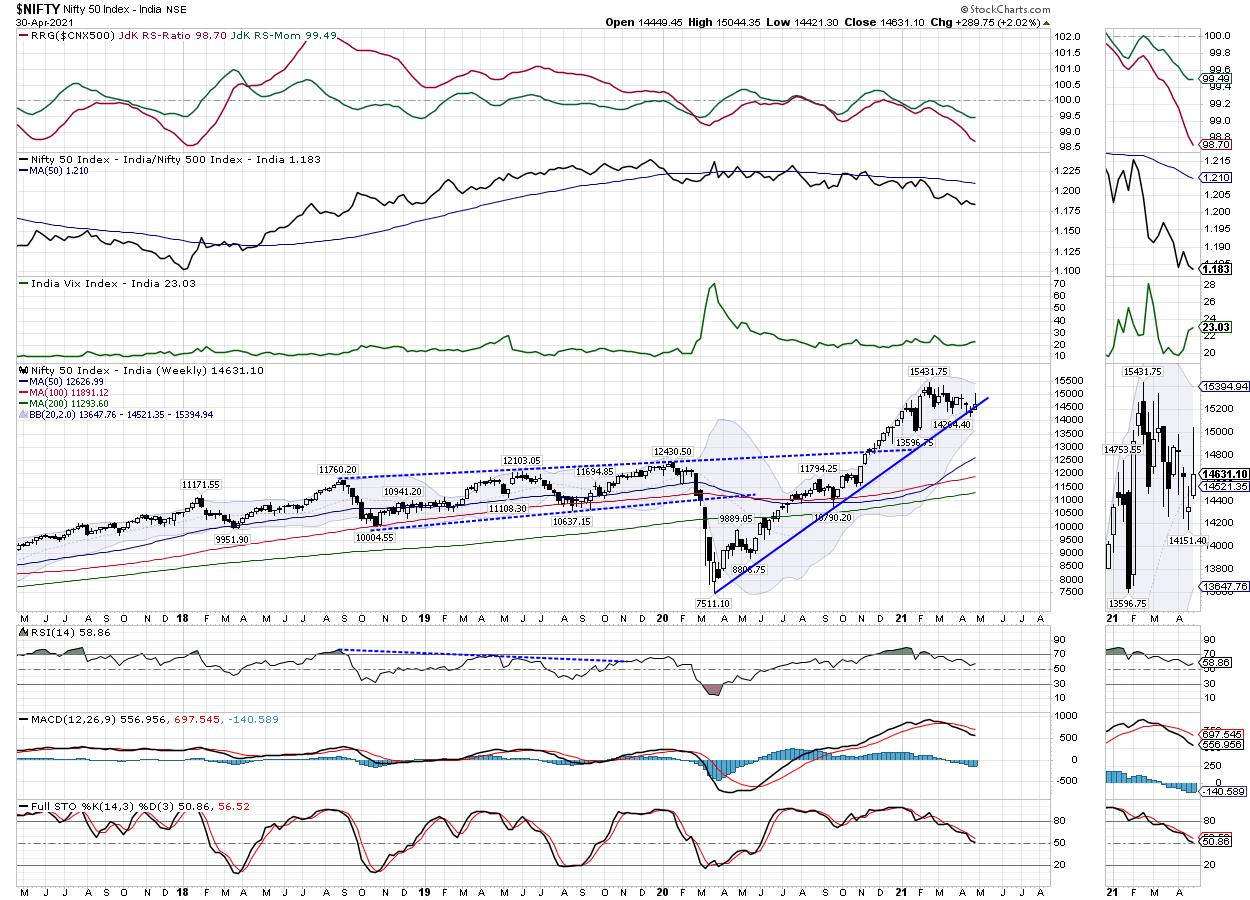 In the week before this one, the NIFTY had violated an important pattern support, which comes in form of a rising trend line drawn from the lows of March 2020. Despite the violation of this pattern support this time, it has averted weakness by managing to hang around precariously near this trend line. The volatility remained absent as the INDIAVIX rose marginally by 1.49% to 23.0300. For the coming week and beyond, it would be crucially important for the NIFTY to stay above this trend line; any failure to do so will increase the possibility of violation of the falling channel that the NIFTY is in, which can also invite incremental weakness in the markets.

The weekly RSI stands at 58.86; it remains neutral and does not show any divergence against the price. The weekly MACD is bearish and is still below its signal line. A shooting star formation was seen on the Candles. Such a formation would occur when the price gaps up, trends higher yet closes much lower, as it is not able to sustain gains. Since such a candle has emerged near a pattern resistance level, it can have bearish implications. However, as always, this would require confirmation on the next bar.

The pattern analysis shows the NIFTY inside the channel it has formed; it was not able to break out of the of this channel and now clings to the important pattern support of a trend line, which begins from the March 2020 lows and joins the subsequent higher bottoms.

All in all, the markets are within a corrective retracement following the formation of the high point at 15431. While the markets are in under such retracement, the out-of-control COVID situation in the country is hitting the market sentiments hard. There is a clear shift of preference towards the traditionally defensive stocks. We recommend staying highly stock-specific and keep fresh purchases limited to low beta and defensive stocks. All rallies should be used more for taking some money off the table rather than making purchases. While keeping overall exposures at a modest level, a highly cautious outlook is advised for the coming week. 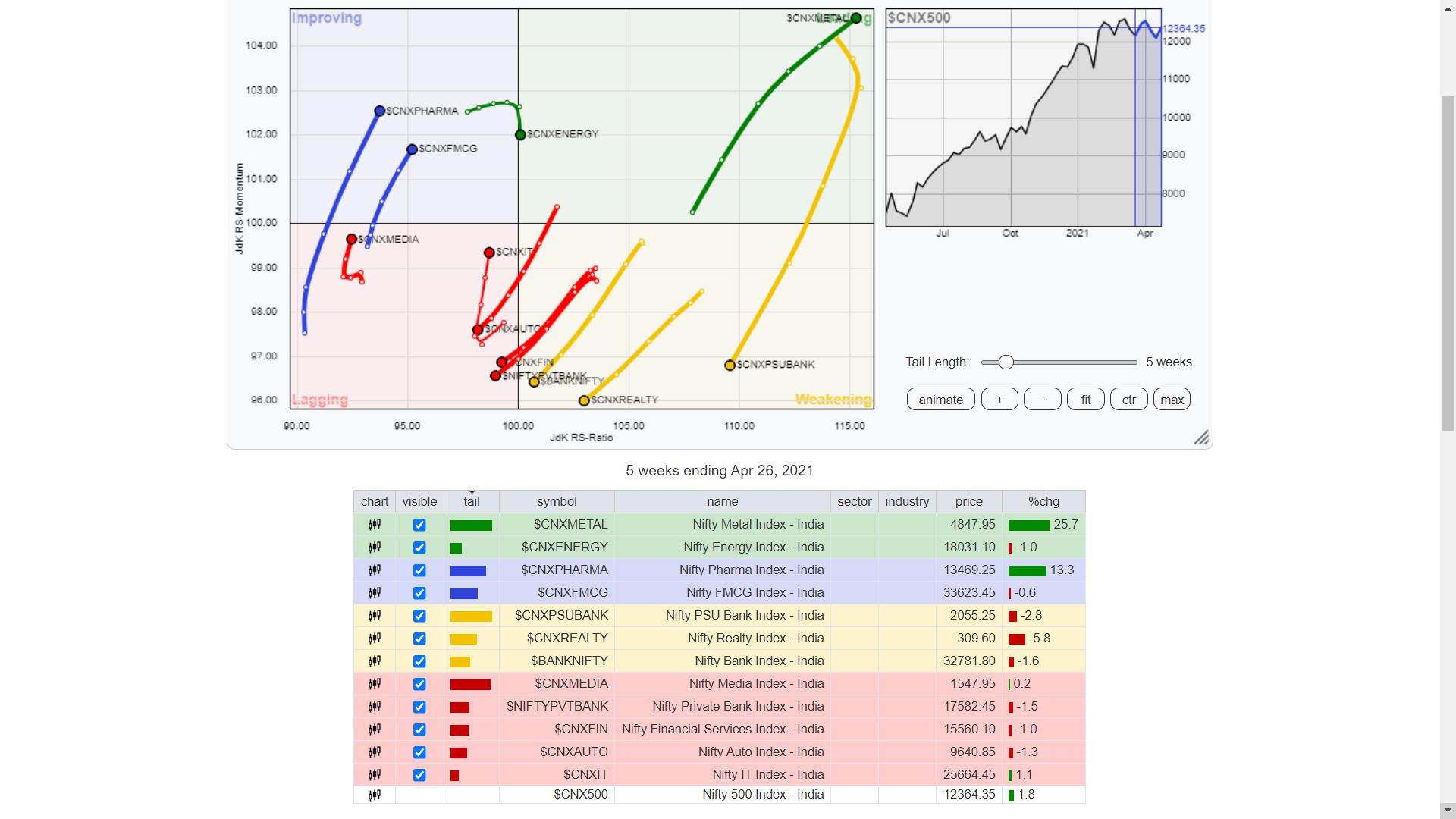 Our review of Relative Rotation Graphs (RRG) shows that only Metal, the Midcap 100 and the Commodity Indexes are showing steady relative momentum while placed inside the leading quadrant. The Energy, Infrastructure and PSE Indexes are inside the leading quadrant, but they all appear to be losing their relative momentum against the broader markets.

NIFTY Consumption has just rolled inside the improving quadrant. It joins NIFTY Pharma and NIFTY FMCG, which are also inside the quadrant. They appear to be steadily maintaining their relative momentum against the broader markets and are likely to show resilient performance, relatively outperforming the general markets.

About the author: Milan Vaishnav, CMT, MSTA is a qualified Independent Technical Research Analyst at his Research Firm, Gemstone Equity Research & Advisory Services in Vadodara, India. As a Consulting Technical Research Analyst and with his experience in the Indian Capital Markets of over 15 years, he has been delivering premium India-focused Independent Technical Research to the Clients. He presently contributes on a daily basis to ET Markets and The Economic Times of India. He also authors one of the India's most accurate "Daily / Weekly Market Outlook" -- A Daily / Weekly Newsletter,  currently in its 15th year of publication. Milan's primary responsibilities include consulting in Portfolio/Funds Management and Advisory Services. His work also involves advising these Clients with dynamic Investment and Trading Strategies across multiple asset-classes while keeping their activities aligned with the given mandate. Learn More
Live Chartlist
Blog Archives
Previous Article