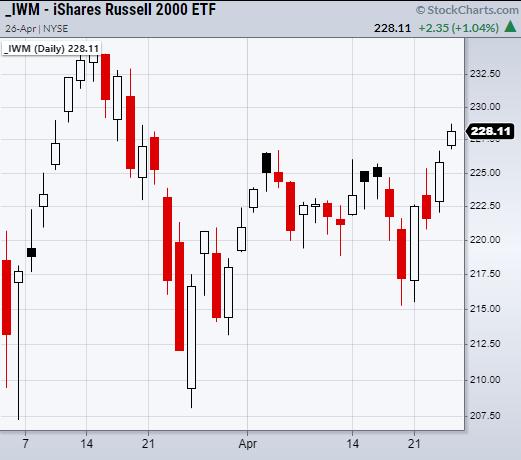 On Sunday, we concluded that if most of the major indices could clear to new highs, along with the Russell 2000 (IWM) breaking out of resistance from $226.69, the market had the potential to make a powerful move up. However, while none of the indices broke out to new highs Monday, IWM was able to clear its pivotal resistance level at $226.69. This is important because IWM has been lagging for most of April, while the Nasdaq 100 (QQQ), Dow Jones (DIA) and S&P 500 (SPY) were able to break to new highs and are currently holding near them.

A continued rotation back into the small caps would be a healthy shift for the market; especially if the other indices hold their current price levels. Next, we can watch for IWM to head back to new highs at $234.53.

To add more depth to the current market picture, key sectors, like biotech (IBB) and semiconductors (SMH), were able to clear or hold over pivotal areas. SMH made a break back through its 10-Day moving average and IBB had a second daily close over its 50-DMA. This confirmed a bullish phase change. However, if the major indices cannot clear to new highs, we have 3 main price levels to watch for.

Watch Mish use the Real Motion indicator to find hidden strength in stocks and ETFs in the latest episode of StockCharts TV's Mish's Market Minute!