An investing fad called ‘Lazy Portfolios’ took hold in the 1990s. Just allocate fixed percentages of your money to every asset out there, it said. • Diversification is good, but these strategies seriously lag the S&P 500. And they’re risky, crashing almost as badly as the index. Fortunately, adding one easy step is all it takes to improve your gains and lower your losses. 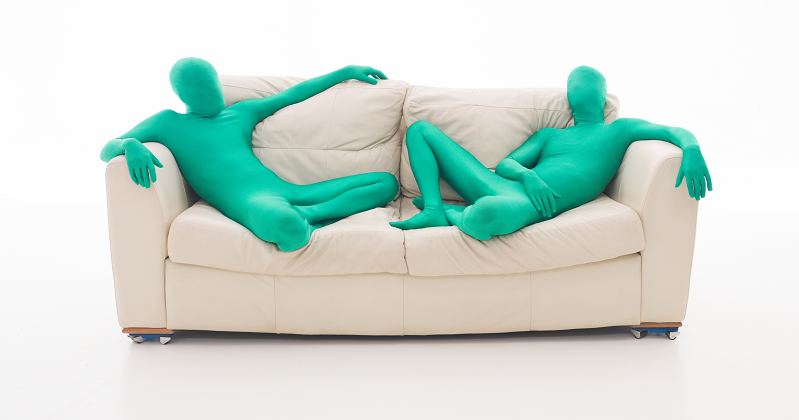 Figure 1. Lazy Portfolios never change their positions, except perhaps to rebalance back to their original percentages once a year. Photo by Comaniciu Dan/123RF.

Being able to trade entire markets with a single purchase — thanks to index funds — has revolutionized investing. Instead of picking individual stocks, with all of their required research efforts and trading costs, investors can now easily assemble a diversified portfolio with just a few purchases. You can choose from virtually all of the world’s classes of assets, each with its own ticker symbol. But lazy thinking about which assets to hold at any given time leads to poor results for investors.

The Vanguard Group, under the leadership of the recently departed Jack Bogle, launched in 1976 the first mutual fund that tracked the S&P 500. (Originally called the First Index Investment Trust, it’s known today as the Vanguard 500 Index Fund Admiral Shares or VFIAX.) What’s less well known is that Vanguard also started a mutual fund (NAESX) that tracked small-cap stocks all the way back in 1960.

The first ETF (exchange-traded fund) launched in 1993. Formally called the State Street Global Advisors SPDR S&P 500 ETF Trust, it’s known to all as SPY. The success of SPY — the largest and most-traded security in the world, according to a ranking by The Balance — encouraged the hundreds of ETFs we see today.

The availability of funds such as these led to one of the first books on using index funds: The Lazy Person’s Guide to Investing by Paul B. Ferrell (Warner Books, 2004). Ferrell was originally an executive vice president of the Financial News Network, a predecessor of the CNBC stock-market cable channel. Later, he was an investing columnist for MarketWatch.com, the business news hub.

Ferrell described eight Lazy Portfolios in numerous columns at MarketWatch. The site has published each day since at least 2004 a tracking chart showing the performance of each strategy against the S&P 500.

Lazy Portfolios spread an investor’s holdings among several different asset classes. Unfortunately, the strategies have no way to tilt toward assets that are in uptrends and tilt away from those that are in downtrends. This lack of responsiveness to market conditions made every strategy underperform the S&P 500 in a recent 15-year period.

By splicing together the published returns of Lazy Portfolios over the years, I’m able to quantify their annualized returns all the way through two long bear-bull market cycles. (Fifteen years is the shortest time period that has any predictive ability, according to a study by the Hulbert Financial Digest.) The portfolios lagged the S&P 500 by 0.73 to 2.56 percentage points annualized, as shown in the yellow column of Figure 2. 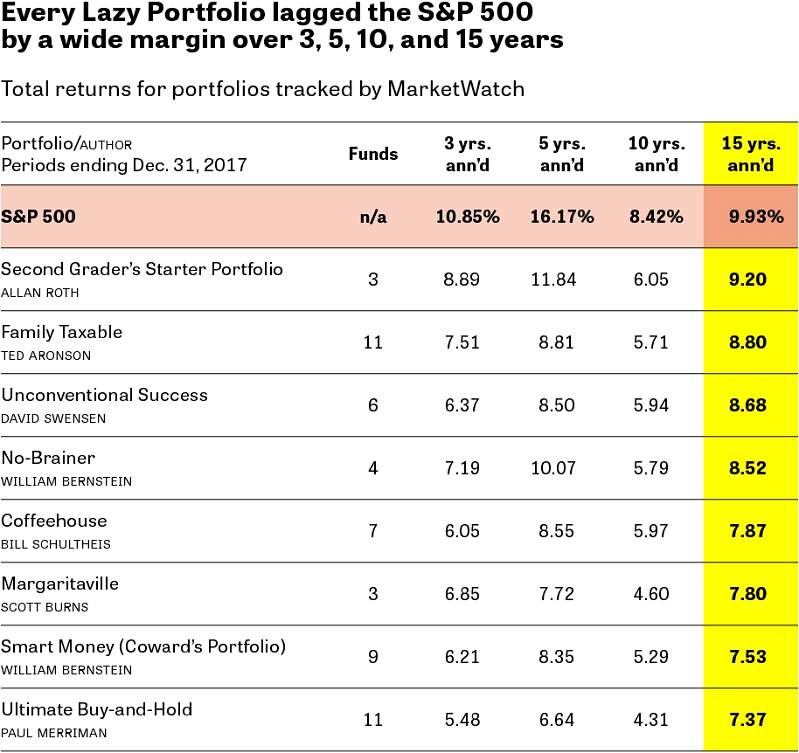 It would be legitimate for Lazy Portfolios to return less than the market if the strategies also kept your losses much smaller. After all, the S&P 500, adjusted for dividends and inflation, has crashed 30% to 50% or worse every 10 years, on average, over the past 80 years. Many people find such losses intolerable.

To the anguish of investors, Lazy Portfolios dive almost as badly as the heart-wrenching, crash-prone benchmark. In the 2007–2009 bear market, Lazy Portfolios subjected investors to losses of 36% to 49%, as tracked by My Plan IQ, a strategy evaluation site. That’s far beyond the “behavioral pain point” of about 25% that compels individuals to throw in the towel.

Liquidating investors’ equity holdings during a bear market locks in people’s losses. It also makes individuals miss out on the powerful recovery “bounce” that the S&P 500 typically delivers in the first few months or years of the subsequent bull market. (For evidence of this unconscious behavioral reaction to losses, see bullet point 6 of my one-page summary.)

Remarkably, adding a single, easy step improves the gains and reduces the losses of the Lazy Portfolios listed below. In tests over a 43-year period, every “enhanced” strategy delivered 4 to 6 points more annualized return than its original, “static” version. (For instance, a 12.93% return on $100,000 over 40 years would give you a gain of $12.85 million. That’s more than four times the $2.96 million you’d gain from the 8.93% return in my earlier example.) An improvement like that is an enormous benefit to investors who know the rules.

The additional step is to rank the asset classes in each Lazy Portfolio, using a simple relative-strength rule, known to academics as the momentum factor. One formula popularized by Mebane Faber, co-author of The Ivy Portfolio, is to average each asset’s total return over the past 3, 6, and 12 months. Holding each month only the three assets with the greatest odds of success in the coming 30 days is all it takes to dramatically improve Lazy Portfolios’ returns and reduce most of their worst losses to tolerable levels.

You really need at least five asset classes — and preferably more — to choose the strongest ones to hold each month. All of the strategies in the bulleted list above include 6 to 11 assets. In the coming parts of this series, that’s enough different assets to help us demonstrate what works and what does not.