The Nano Portfolio includes a significant exposure to global stocks, which is a healthy reminder that we shouldn’t put all our eggs in one US basket. • The strategy is called ‘nano’ (ultrasmall) because it holds only FIVE assets — fewer than other Lazy Portfolios. That’s not much diversification, but it’s just enough that holding only the strongest THREE assets every month sharply improves your gains. 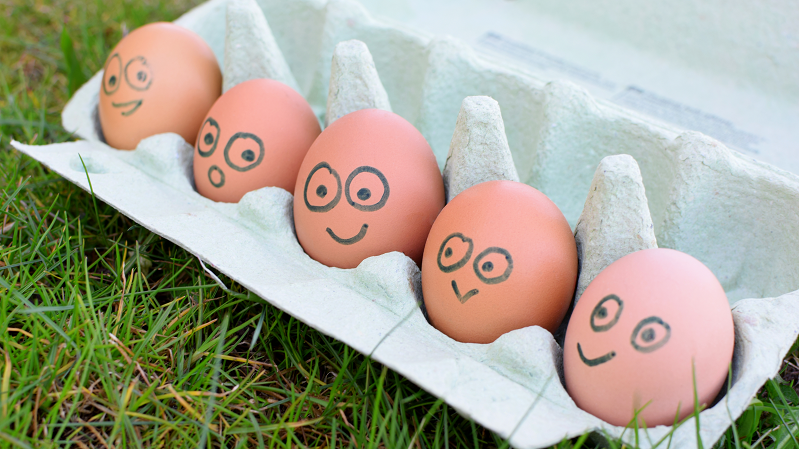 Figure 1. The Nano Portfolio’s allocation of one of its five positions to non-US stocks reflects the adage that you shouldn’t keep all your eggs in one basket. Photo by Ingae/Shutterstock.

The Nano Portfolio was created in 2006 by John Wasik, a financial journalist and author. It’s called “nano” — which means one-billionth in the metric system — not because it has anything to do with nanotechnology or other ultrasmall atomic structures. (To illustrate how little a nano-something represents, every second your fingernails grow in length by one nanometer — one-billionth of a meter!)

The Nano strategy derives its name from the number of asset classes it holds, which is only five, as shown in the list below. Five is fewer index funds than most static asset allocations hold; they usually include 6 to 10 funds.

To follow the Nano Portfolio, you hold its specified five funds in equal weights. In other words, you allocate 20% of your money to each fund.

Unusual among Lazy Portfolios, the Nano allocates just as much money to non-US stocks as it does to American stocks. Most static portfolios have a US bias, weighting the S&P 500, for example, more heavily than stocks from other parts of the world.

The Nano assigns 60% of its total portfolio to equity-like assets, including real-estate investment trusts, and the other 40% to US bonds. This is a common ratio that’s often called the “pension model”:

The 2007–2009 global financial crisis drove the Nano Portfolio to a loss of 38% between month-ends, as shown below. That may have been a smaller loss than the celebrated manager of Yale University’s endowment fund, David Swensen, as Wasik trumpeted in an October 2010 blog post. Nevertheless, Wasik wrote, his followers should start augmenting his five original funds with two additional ones that track commodities and international bonds, allocating 14¼% to each. Since his seven-fund variation arose long after Nano had been widely publicized, it is not analyzed here or in most other articles about Nano.

Because the five-fund model launched in fairly recent times, Nano has not been tracked for years by MarketWatch.com like other Lazy Portfolios we’ll analyze in this series. In order to estimate Nano’s performance over a recent 43-year period, which includes four bear-bull market cycles (Jan. 1, 1973–Dec. 31, 2015), I used the Quant simulator. This program is available as a free bonus to subscribers of Mebane Faber’s Idea Farm Newsletter ($399 per year). The 43-year simulation is shown in Figure 2. 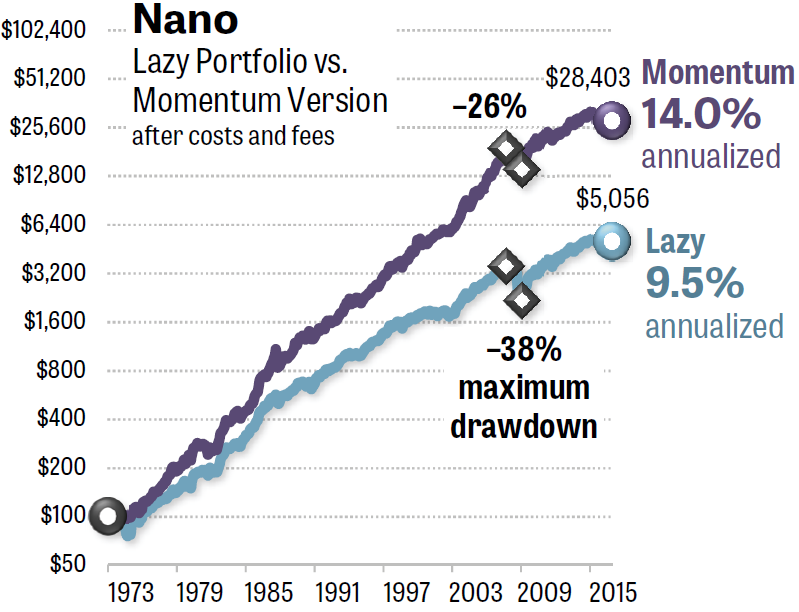 As you can see in Figure 2, Nano’s long-term performance greatly improves when you hold only the strongest three asset classes in any given month. The annualized return of the Lazy Portfolio version was 9.5%. Adding the Momentum Rule boosted that to 14.0%. Starting with $100, the lazy version gave you only $5,056 after 43 years. Using the momentum version, you ended up with $28,403 in your account — more than five times the ending value. (The proportions are the same whether you start with $1,000 or $100,000 or any other amount.)

Even more importantly, from the point of view of individual investors staying the course through crashes, the momentum version of Nano reduced its losses during bear markets, compared with the lazy version. The static asset allocation version lost 38% between month-ends in the 2007–2009 bear market. By contrast, the momentum version lost only 26% in the 2007–2009 bear market. Unfortunately, that kind of loss is slightly beyond the 25% “behavioral pain point” we discussed in Part 1. Drawdowns greater than 20% or 25% compel many investors to liquidate their equities, locking in their losses.

Wasik has been a financial columnist for Reuters and Bloomberg, as well as a contributor to the New York Times, Forbes, Barron’s, and the Wall Street Journal, as described at his website. He’s the author of 17 books, including Keynes’s Way to Wealth, which reveals how famed economist John Maynard Keynes built a multimillion-dollar nest egg through wise investments.

Asked in an interview whether he could add a Momentum Rule to Nano, Wasik replied, “I haven’t looked at that portfolio in many years.” He expressed admiration for economists Eugene Fama and Kenneth French, who’ve written many peer-reviewed papers that discuss momentum, but added, “I don’t have the academic chops to tell you whether that’s a factor.”

If you’re getting the idea that there’s something better than Lazy Portfolios to grow your money, you’re right. In the coming parts of this series, we’ll see more strategies that improve their gains as well as reducing their losses when a Momentum Rule is added, as well as how to manage your money the 21st-century way.