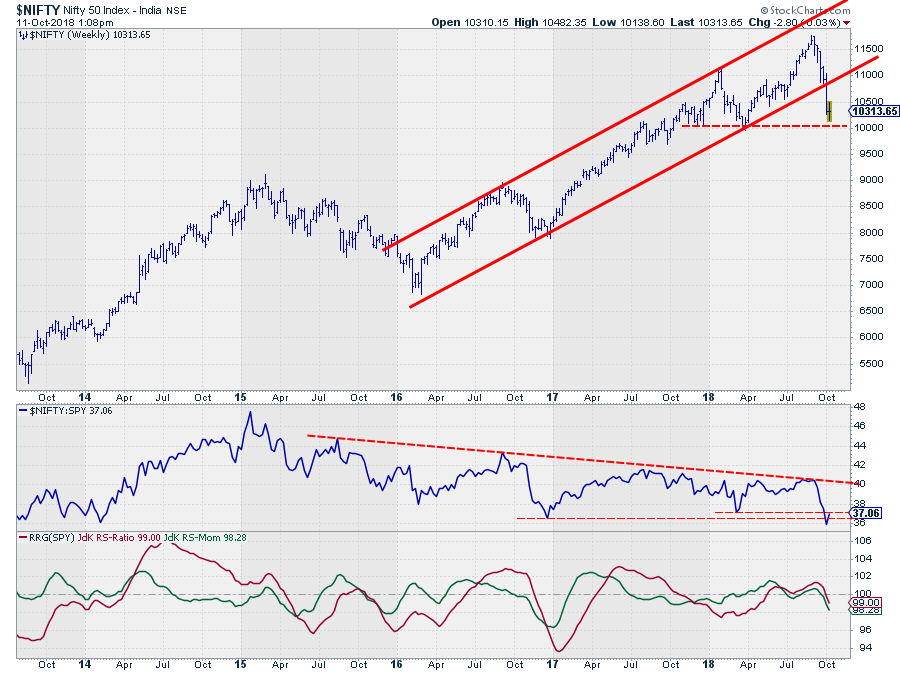 This article is an extended and updated version of the article that appeared in last weekend's Chartwatchers newsletter.

The Indian $NIFTY Index dropped out of an almost three-year uptrend at the close of last week. The rising support line that started at the low in early 2016 did not manage to hold up and was clearly broken during last week's market action.

Relative Rotation Graphs can help to put the move of the $NIFTY index in international perspective as well as help pinpoint sectors within the $NIFTY index that should offer protection against a decline of the general market, or at least an outperformance over $NIFTY. 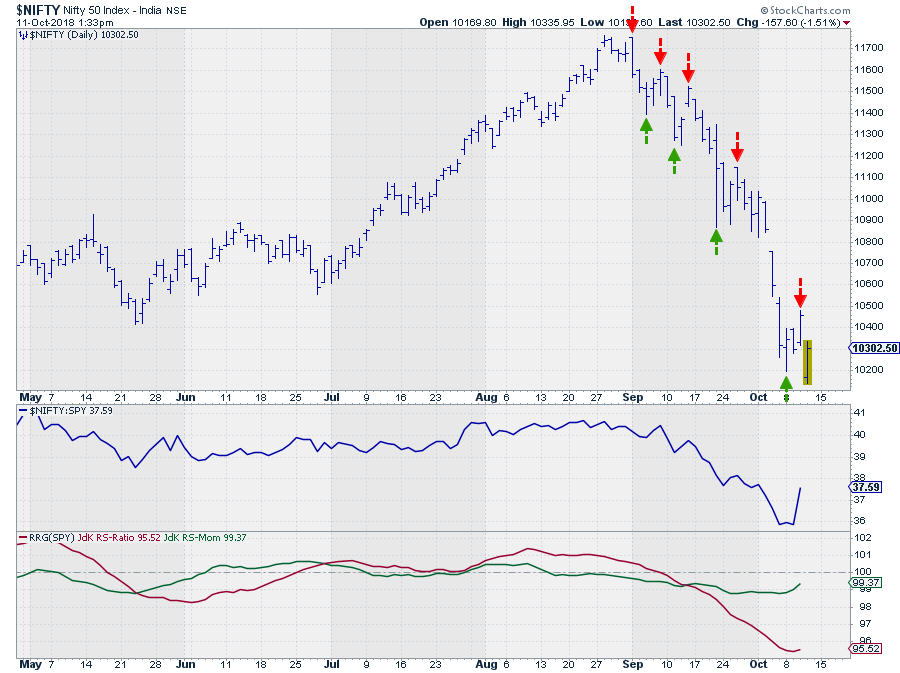 The daily chart of $NIFTY shows that a series of lower highs and lower lows already started at the beginning of September. As I am writing this (morning CET 10/11 ) the Indian market is still open and bouncing back off the support area around 10.000 which is also annotated on the weekly chart above.

On this daily chart, the $NIFTY has tested the 10.200 low that was set a few days ago and is now rallying higher. This is all happening just above the more important support level at 10.000. Given the steepness of the decline, some recovery rally is possible/likely but it will probably be short-lived as the major trend is definitely broken and the upside potential is now limited by overhead resistance around 10.500 and 11.000 (former support line).

A break below 10.000 would be another negative sign for $NIFTY

From an international perspective 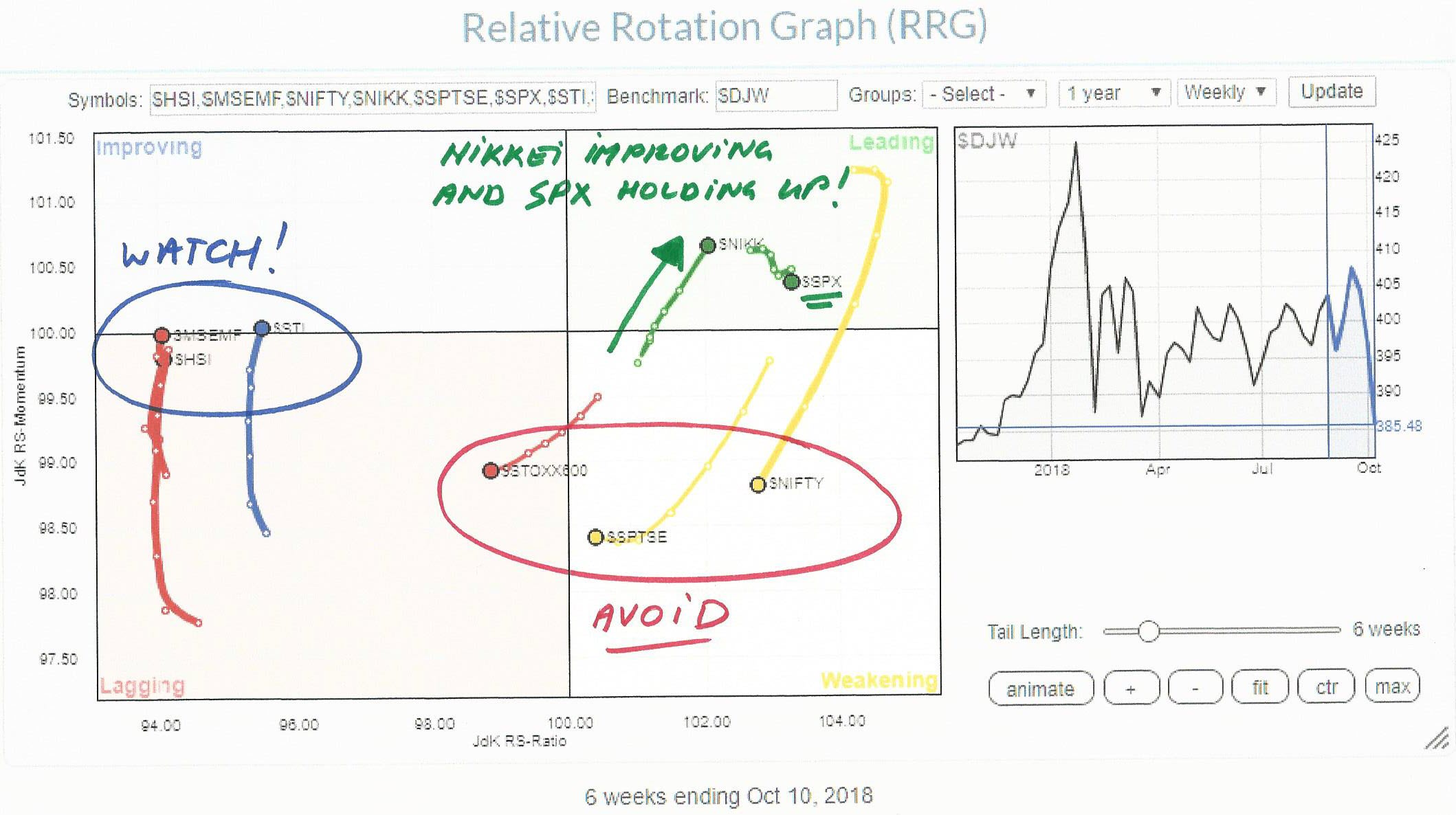 The Relative Rotation Graph shows the $NIFTY inside the weakening quadrant, which it entered a few weeks ago after a strong rotation through leading. The long tail indicates that there is (negative-) power behind this rotation.

The US market ($SPX) is still stable, indicated by the short tail, inside the leading quadrant making it, still, one of the stronger equity markets in the world (at least in this selection of world markets).

The one market that really stands out on this RRG is the Japanese $NIKK index which is pushing further into the leading quadrant at a strong RRG-Heading after a short move through weakening. 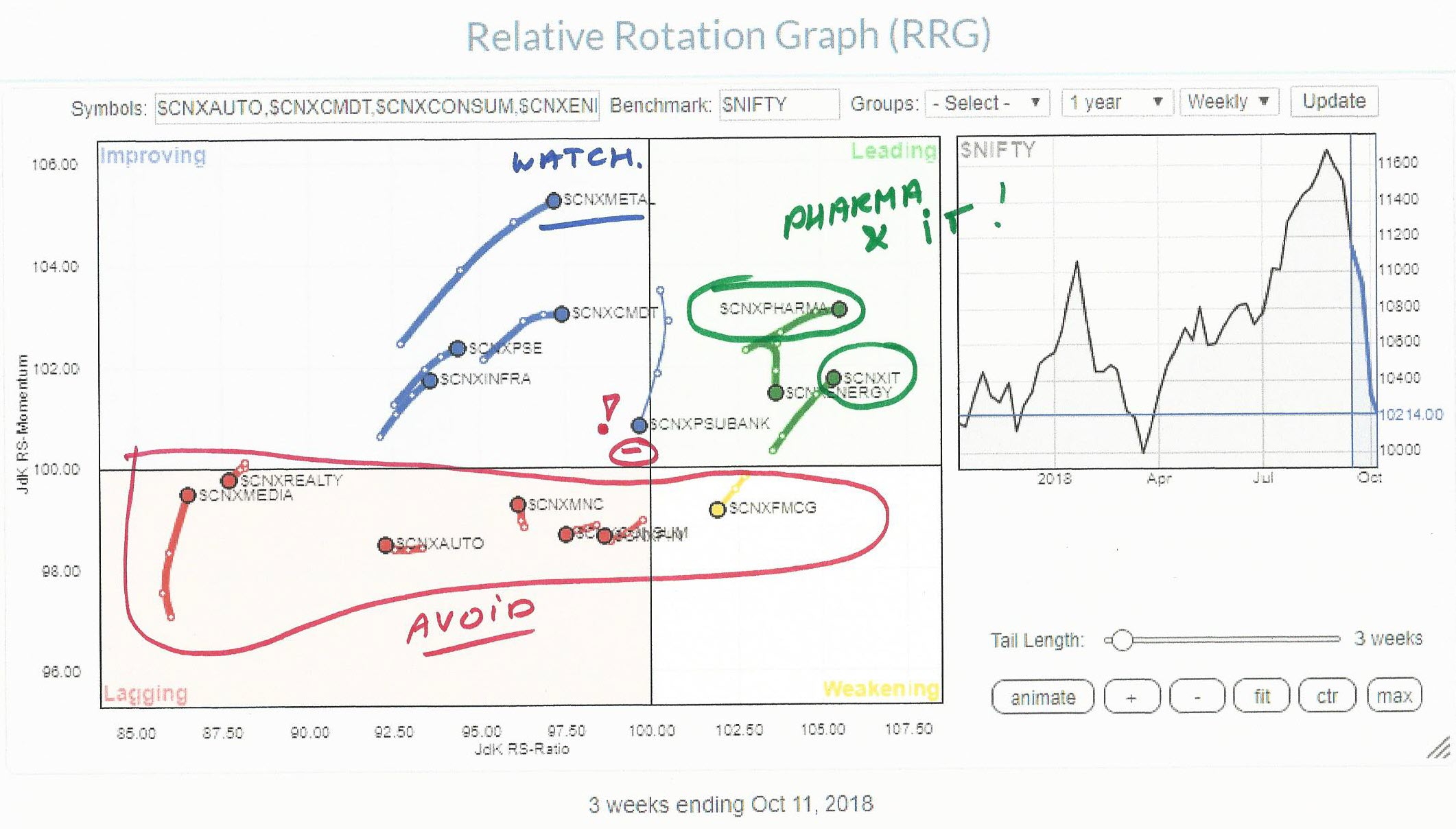 With the NIFTY stumbling down, the Relative Rotation Graph for Indian sectors can provide us with some perspective of sectors that may offer investors some protection against a general decline or at least outperform the benchmark index.

Inside the leading quadrant, there are now three sectors; Pharma, Energy and IT. The Banking sector just moved back from leading into improving which is a very unusual rotation and should be interpreted as negative. The Energy sector also already started to roll over and is now moving lower on the JdK RS-Momentum scale. This makes Banks and Energy less interesting as they probably already have run their course.

Pharma and IT are inside the leading quadrant AND at a strong, which means between 0-90 degrees, RRG-Heading. This makes these two sectors the leading sectors for the Indian market at the moment.

A third sector that may be worth keeping an eye on is the Metal sector which is inside the improving quadrant but showing a very long (=strong) tail, is at the highest Jdk RS-Momentum value AND heading towards the leading quadrant at an almost 45-degree angle. 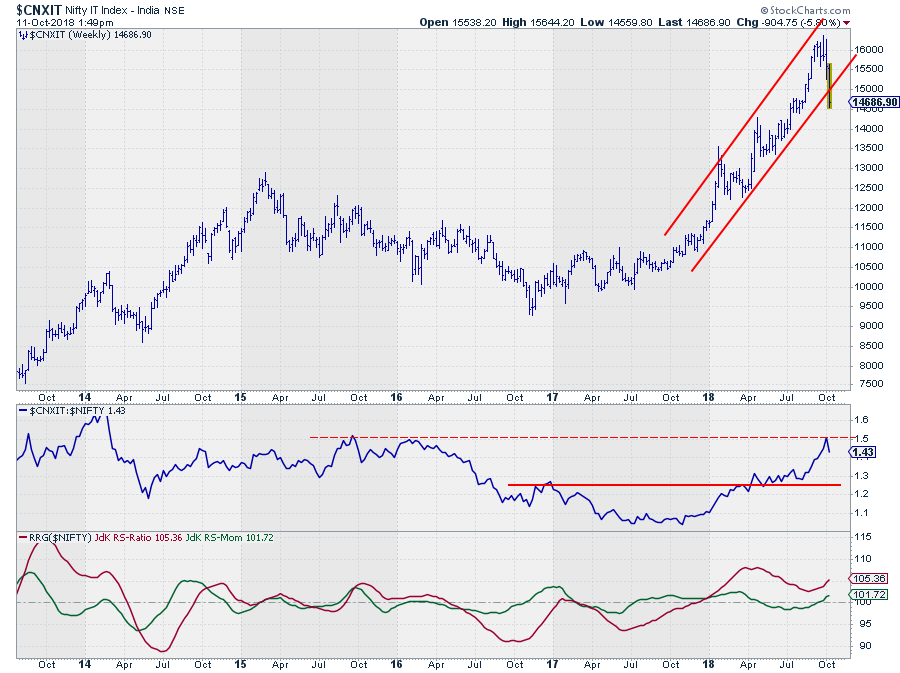 The IT sector shows up as strong on the RRG, inside the leading quadrant and at a positive RRG-Heading. This follows the position of the RRG-Lines and the raw RS-Line in the weekly chart above. So far, all good. But the raw RS-Line peaked against overhead resistance, which is not deadly as the trend is still intact but it is not helping either.

However, the nasty break out of the rising channel on the price chart is a bit worrisome. Unless we rally strongly today and tomorrow and get a close back inside that channel, this is a clear break which will not help relative strength.

The combination of raw RS testing resistance and price breaking a weekly trend channel makes the IT sector vulnerable in the near term.

This becomes even more clear on the daily chart for $CNXIT showing a gap down in combination with a break of the relative trend and the RRG-Lines putting this sector inside the weakening quadrant on the daily RRG but still at the highest JdK RS-Ratio level. 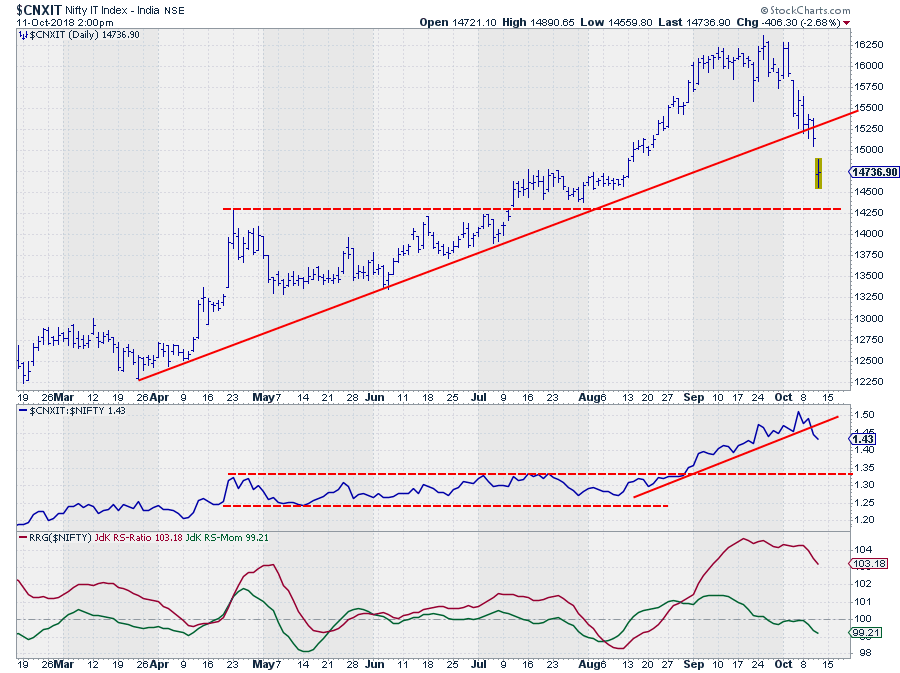 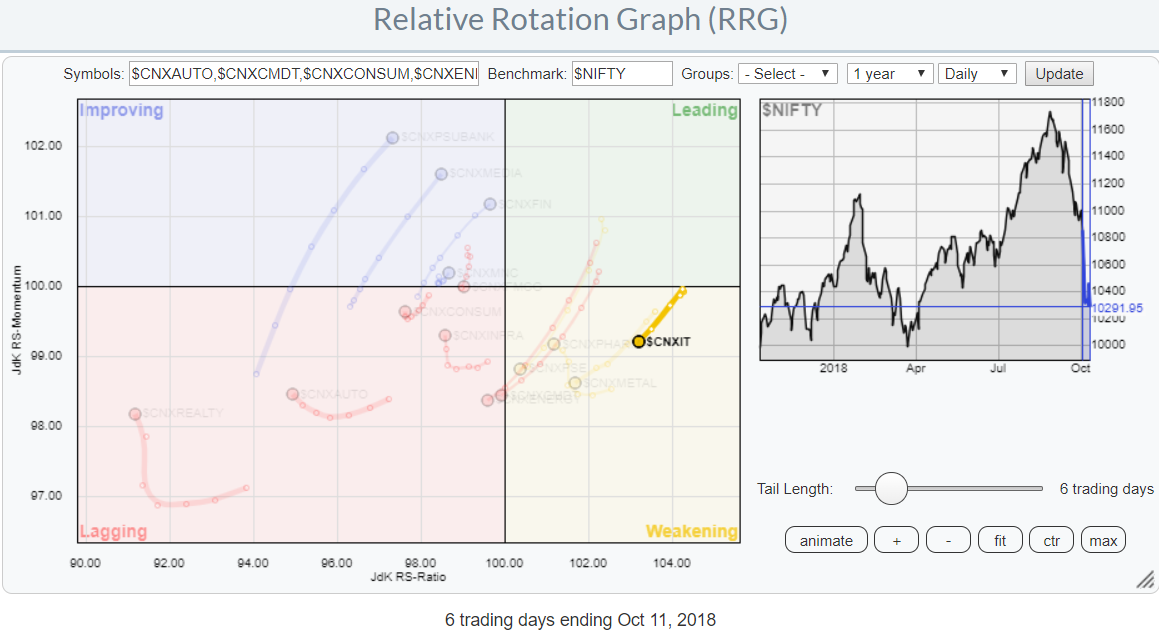 In order for the IT sector to remain strong and an outperforming sector in India, ideally, we would like to see the rotation on the daily RRG to complete at the right-hand side and curl back up and return to the leading quadrant without hitting lagging. Such a rotation would bring the daily rotation back in sync with the weekly. 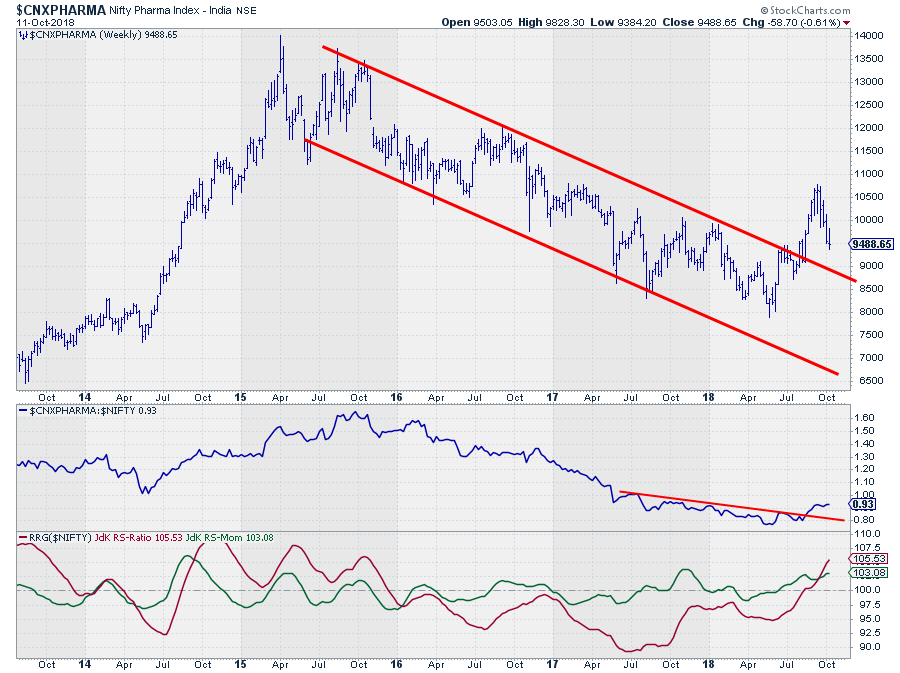 The Pharma sector is showing quite a different picture from most other sectors inside the NIFT index.

The chart is characterized by a three-year downtrend that started back in 2015 and ended recently when price broke above the falling resistance line that marked the upper boundary of the falling channel. A new rhythm of higher highs and higher lows is already visible on the weekly chart.

The accompanying relative picture shows a nice turnaround as well. The RS-Line came out of shallow basing formation and seems to be on its way higher which is confirmed by the position of the RRG-Lines that are both above the 100-level and moving higher.