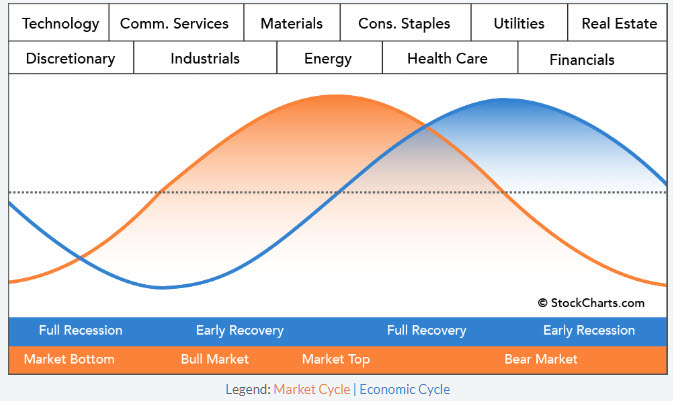 The qualifications for offensive and defensive sectors can be made in a variety of ways. One of the most popular is based on the economic cycle. The theoretical concept is illustrated in the image above and comes from the work of Sam Stovall in S&P's guide to sector rotation. The idea behind the image is that the stock market leads the economy by 6-9 months. The economic cycle is based on cycle (recession) data coming from the National Bureau of Economic Research. The sectors are then plotted on the market curve based on their historical performance during different phases of the cycle.

I have done some work, with Sam looking over my shoulder, to try to update the positioning of the sectors based on more recent data and include the new sectors Real Estate and Communication Services, but that does not appear to be a slam dunk. This is still work in progress but, as far as I can tell from the research so far, things have changed over the past twenty or so years. Who would expect that, huh...?

In an attempt to look at things from another angle, I recently got the idea to try and classify offensive and defensive using BETA.

My idea was to use BETA as a ranking metric to classify sectors, or stocks, as offensive or defensive. Financial literature and the internet will provide you with plenty of examples and instructions on how to calculate BETA, but here is the very short version.

The BETA for a stock versus a benchmark (S&P 500) is done by calculating the co-variance of that stock and the S&P 500 and dividing that number by the variance of the S&P 500.

I have set up a spreadsheet that holds monthly data for all 11 sectors and calculates the BETA for every sector based on the look-back period, which is a variable which can be changed.

I talked about this approach in last Tuesday's Sector Spotlight show on StockCharts TV. If you missed the live show, you can watch the recording on the StockCharts YouTube channel here. If you would like to receive a copy of that spreadsheet for your own use, please drop me a message at Juliusdk@stockcharts.com and I'll be happy to share it with you.

The results, based on a 12-month BETA, are shown in the color-coded table, where we can see that Energy is the most sensitive sector at the moment and Utilities is the least sensitive.

Regarding Utilities, that is not much of a surprise as that is a well known defensive sector. In contrast, Energy, at least for me, was never really a very offensive sector. Two other surprises, at least for me, is the position of Consumer Discretionary and Materials. I had expected these sectors to be higher on the list, but they are only appearing somewhere in the middle.

Overlaying on a Relative Rotation Graph

The offensive sectors are spread out. Energy is on the far-left and the weakest sector at the moment, while Industrials, Financials and Technology are middle of the range for now. Based on this image, defensive sectors continue to dominate at the right-hand (positive) side of the RRG, urging caution for the market as a whole.

Think of it as an orange blinking traffic light; you can still continue, but be careful!