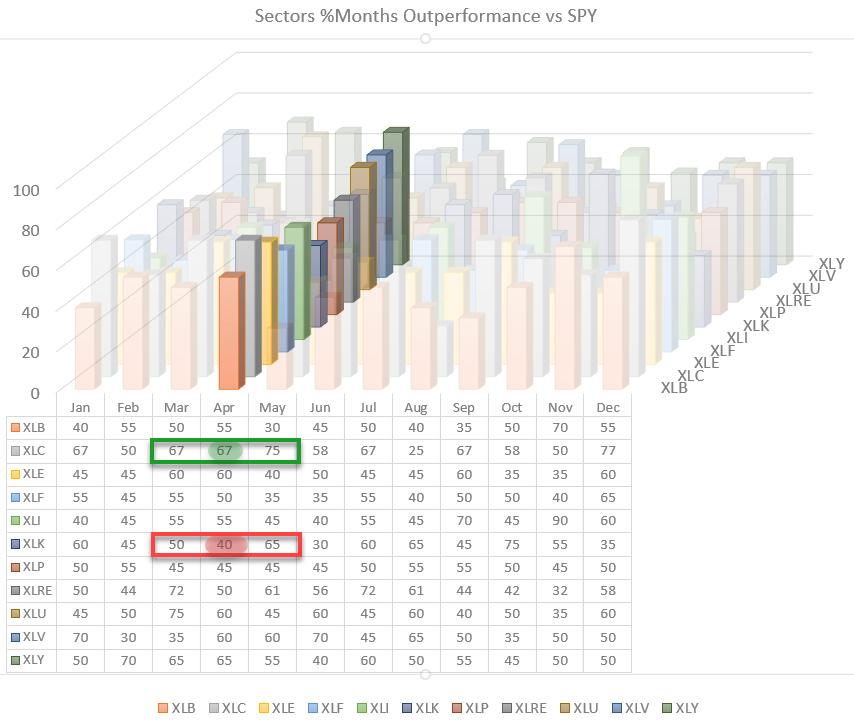 The seasonal trends for sectors vs. the S&P 500 going into April show many 50/50 odds for out- or underperformance. But the two sectors that stand out are interesting and important ones.

What magnitude of over-/underperformance can be expected?

The table below shows the average relative return per sector vs. the S&P 500. 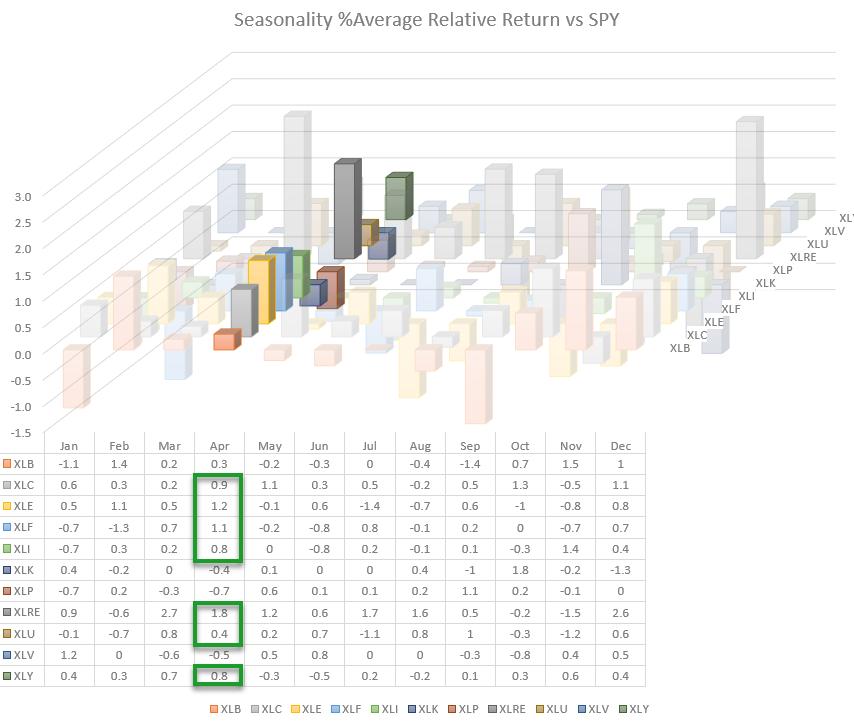 For XLC, that is an average of 0.9% outperformance over SPY, while, for XLK, that is a 0.4% underperformance vs. SPY, which is in-line with the figures from the first table.

Now how are these sectors currently rotating on the Relative Rotation Graph? 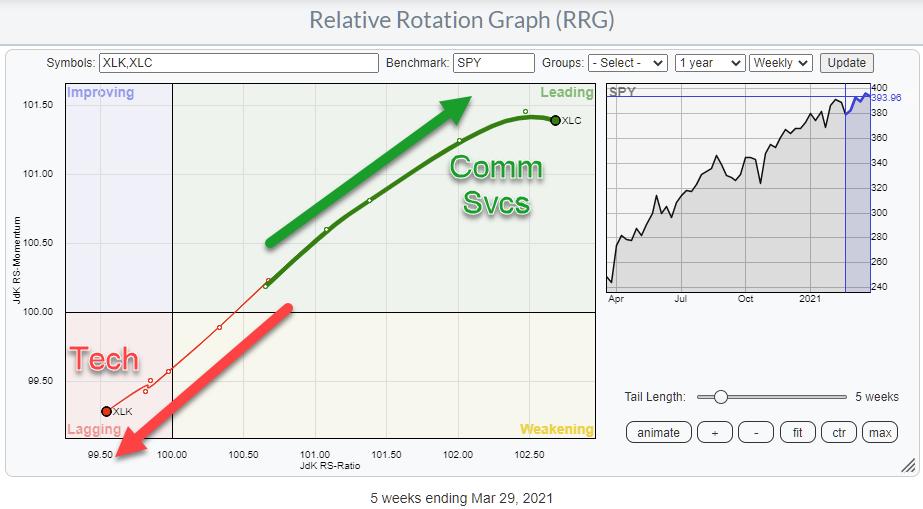 The RRG above shows the rotation for XLC and XLK vs. SPY over the last five weeks. The pattern could not be more clear. XLC is moving further into the leading quadrant, while XLK is pushing into lagging.

This rotation fully matches the seasonal expectations for these sectors. 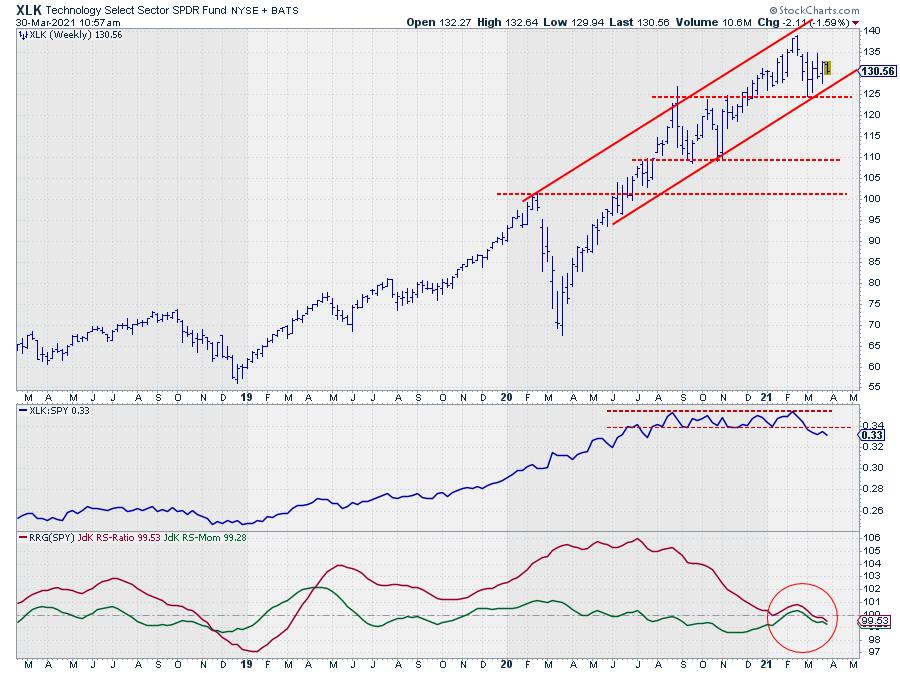 The "problem" for the technology sector lies primarily on the relative strength chart (blue line below price chart). After six months of sideways movement, relative strength has now convincingly broken to the downside, signaling more underperformance for technology ahead.

The resulting decline of both RRG-Lines below 100 and continuing downward confirms the technology sector's emerging relative downtrend. So far, the price trend has managed to hold up within the boundaries of the rising channel and above horizontal support.

At 26% market capitalization within the S&P 500, technology is an important sector, and its behavior can/will impact the behavior of the S&P 500.

My take from this setup is that as long as XLK can hold inside the rising channel or above the horizontal support level, the negative impact on SPY will be limited and other sectors may be able to keep the market afloat, or even push it marginally higher while waiting for XLK to recover.

As soon as price support in XLK also starts to give way, the damage for SPY will become more constructive and we will likely see a corrective move in SPY as well. 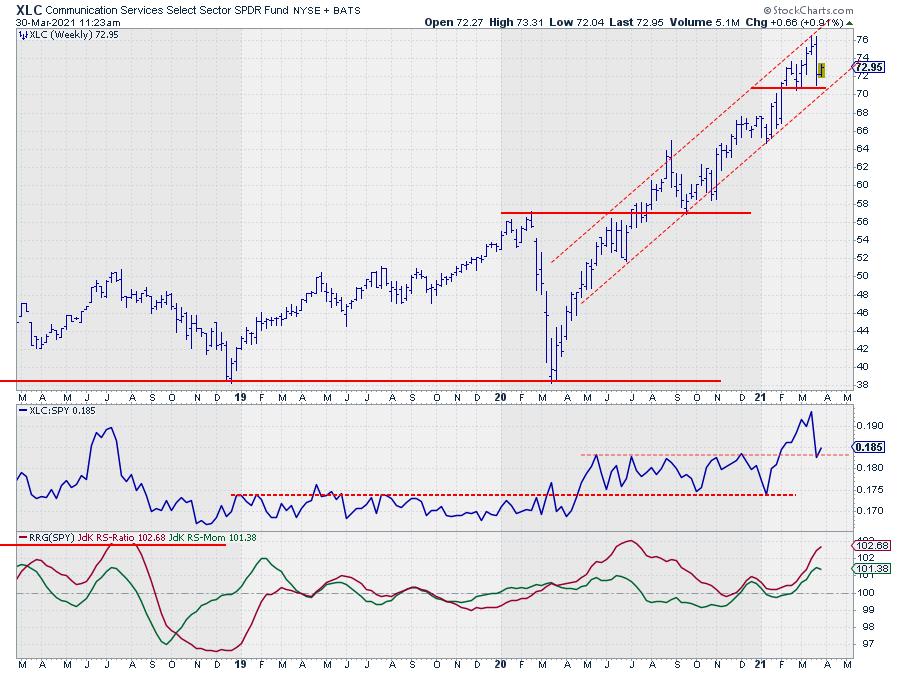 The chart of XLC above shows more or less the opposite image of XLK when it comes to relative strength. After a period of sideways movement, the relative strength of XLC vs. SPY broke out to the upside, signaling a renewed period of outperformance for this sector.

The trend in price for XLC is also holding up well within the boundaries of the rising channel, which supports further strength for XLC going forward.

The problem, if you wish, is that XLK is pulling negatively at 26% while XLC is only pulling positively at 11%. I have written a bit more on this in last week's newsletter article "Tech is a Drag," which shows the market capitalization forces at work on a Relative Rotation Graph.

Even though XLC, XLI, XLRE and, to a lesser extent, XLF and XLE are generating positive pull for SPY, their combined power is only 37% versus more than 50% negative drag from XLK, XLY and XLV.