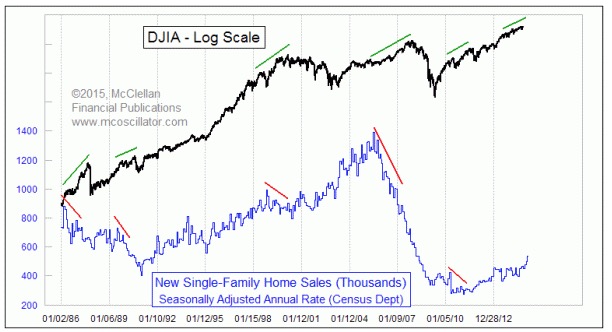 Before each of the really ugly bear markets of the past 30 years, there has been an important signal from housing data well ahead of time.  We do not have such a signal now, and so that portends more upside in the months ahead for stock prices.

In fact, the past 3 months have seen a pretty substantial upsurge, especially in the Northeast and South regions of the USA as tracked by the Census Department.  That takes the seasonally adjusted annual rate of new home sales to its highest level since February 2008.  Generally speaking, seeing this home sales data make higher highs has been good news for the long-term path of stock prices.  It is when the two diverge that problems start to develop.

That does not mean there is no room for worry, though.  The real-time data shown above are saying that everything is wonderful for home sales.  But our leading indicator for such data says that we could have problems in the months ahead.

Lumber futures prices act as a great leading indication for home sales, home prices, and even interest rates.  In this next chart, I am comparing lumber prices to that same Census data series on new home sales, but with one key adjustment.  I have shifted the lumber price plot forward by 12 months to help reveal how the home sales data tend to follow in the same footsteps a year later. 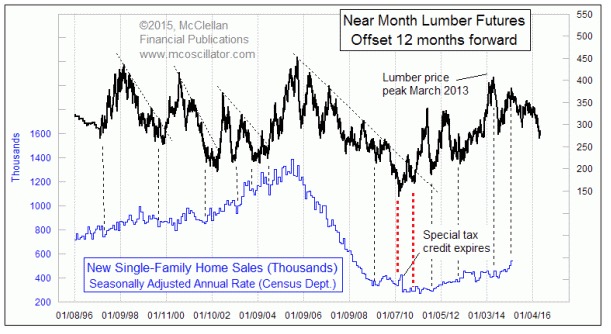 Lumber futures prices bottomed in 2009, and it took another year for that upturn to work its way into the housing market because of this lag.  We are now at the 1-year anniversary of an important peak in lumber prices, and the path since then has been aggressively downward for lumber prices.  This implies that we should see a corresponding slope change for new home sales.

The magnitude of that slope change is not as easily modeled.  This leading indication picks up the changes in direction for home sales most of the time, but the magnitude of the housing response to lumber’s movements can be affected by other factors such as fed actions, household demographics, special tax credits, etc.  That said, it is hard to imagine that the large downward movement we have seen in lumber prices over the past 12 months would not result in a significant response in the new home sales data.

If and when we see such a response in the new home data, then we can start worrying about a potential divergence relative to the DJIA in the top chart.  For now, we do not have such a divergence evident, and so on that basis there is less reason to worry about a major bear market for stock prices.