'Brinksmanship' - pretty accurately describes where many markets and crisis stand ahead of the weekend. Whether Greece, the Chinese collapse peppered with sporatic rebounds as the PBOC tries to implement their 'Plunge Protection' efforts (typically sold into, as investors need to raise money; but interventions have impact on astronomically-priced stocks, many of which are only bouncing due to the ability 'to' sell having been frozen; a big mistake for 'price discovery'); or incidentally nuclear-deal Iranian impasse periodically revealing (more).

China and Greece are not solved, even where 'time is bought' (and precedents set); and I loved China saying 'the stock market is "forbidden" to go any lower'. Of course if you create a trading halt or freeze the ability to short, buy, or even sell; then I guess you've forbidden some things. Of course invited a scramble to sell when a stock is opened for trading; unless the penalty of doing so is a jail term, fine, or perhaps resell of your organs (such things still happen). Yes I think investors would hold for the long-term if those are the alternatives :). 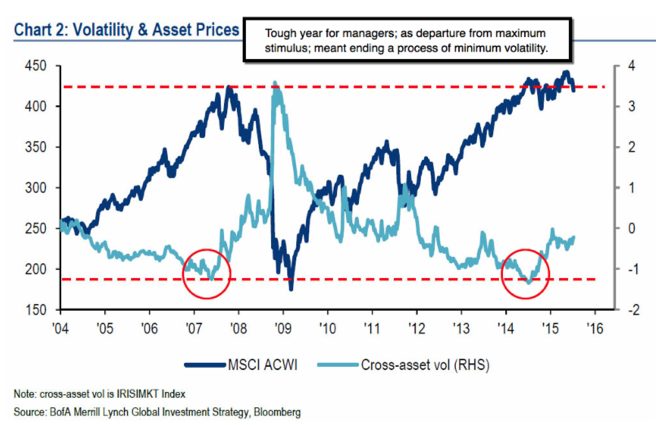 What this does do is 'teach' lessons we suggested would occur about 'risk'. That was basically unknown in a society where the term 'iron rice-bowl' prevailed for so many years. (China and Greece mostly redacted in this courtesy 'sample' of our work, to give you an idea how we rightly handled these markets and invite you to join our membership who're very happy they listened in this year's saga.) 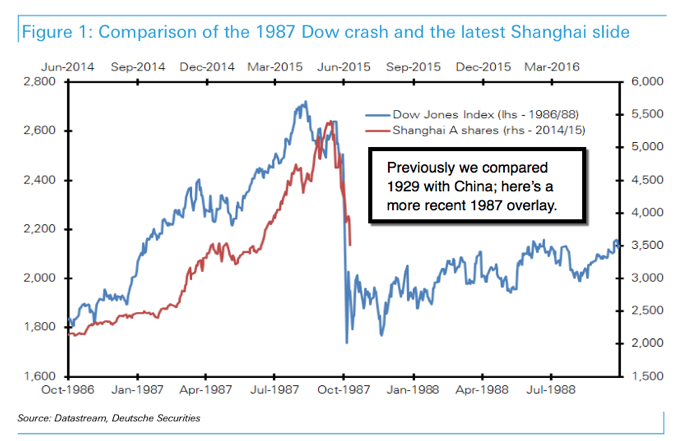 (Of course this is in-hiatus because of draconian PBOC crackdown threats.)

Now, to an extent the Czechs and Brits are both (from opposing directions) just a bit 'less' competitive, because of the forecast (we called the 1.40 to the Dollar peak, and 79 Dollar Index low; just in-case new members are curious; and while long-in-the-tooth, these trends have not fully peaked as of yet) trends, which we also thought was sped-along by the Swiss, who had been supporting the Euro.

Finally; two 'headline risk' outliers; one is Iran, and the other is 'earnings'. The earnings flow is being viewed by most analysts as acceptable, because most of the companies (or analysts) lowered guidance severely enough so that the 'bar' to make numbers is believed easier.

Now the Persians (reserved). There is no deal; but they're of course the rug merchant class; and know how to trade in the Vienna bazaar.

So did Merkel blink? May not be so simple. This deal has to pass muster not in Europe as much as in Athens; that's not a certainty. I'll delve into this via the videos; and am hugely pleased that we're flat overnight after a fairly incredible trading day in the S&P.

They'll figure some way to forestall disaster in Europe; because I'm coming; so therefore the markets will be allowed to erode after (reserved). My thanks to several members appreciating a spectacularly successful trading week based on guidelines assisting their own decision-making process.

Daily action - is thoroughly described in the videos and exceeded what even in the final hour we thought would be a very good downside S&P gain on one of the rare up-down reversal calls we played both ways in the morning (bought the 10:30 or so lows, very close to the mark, and then sold and shorted the ensuing rebound). It worked out spectacularly for an 'inside day'. 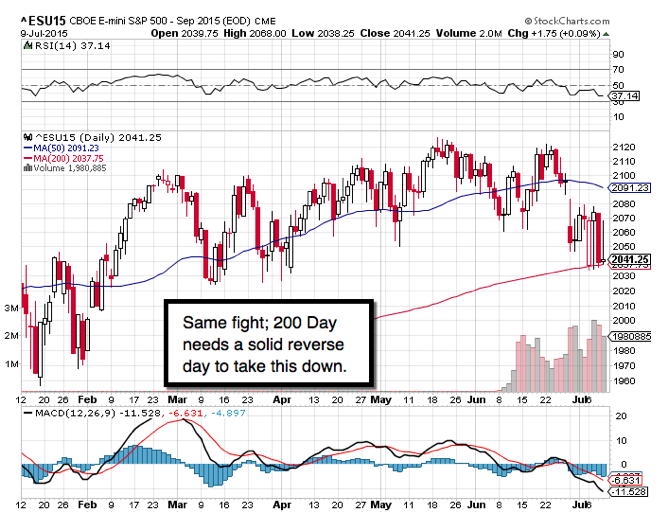 The 'spectacular part' was the late drop. We decided in the pre-close comment to take the gains (which at that time were about 10-12 handles), but via trailing stop, as for some reason I suspected the S&P would flop AFTER the NYSE closing Bell. And wow did it ! Suddenly we had a 20 handle gain on our hands, and something like that 'booked' for all who concurred and shorted the morning and hung around all the way to the day's anything-but-bitter end. 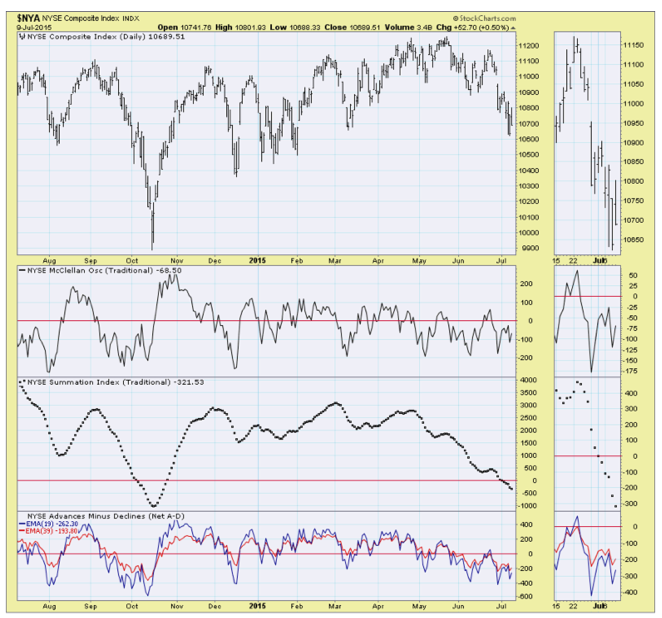 The big picture won't change from what we've outlined, almost regardless of the news in the next couple days. 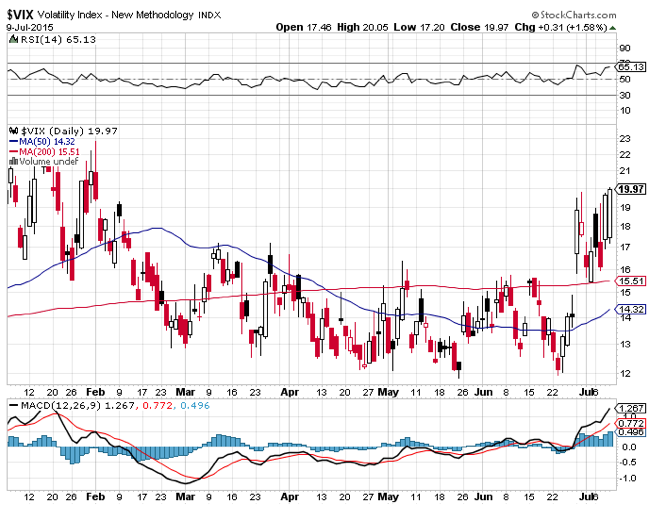 After reading the story about Indonesian airline pilots being recruited by ISIS, I can only say that I'm pleased to be flying British on this particular outing. (Yes, a member inquired why not Delta; knowing I'm a loyal old customer there. Well Delta owns 49% of Virgin; so they partner in many ways including Sky Clubs as well as miles. And it's Virgin that flies nonstop from Florida; shaving hours off the trek through Atlanta or New York's JFK. Not to mention rumor has it their 'Upper Class' is a shade better than Business Elite; but it's likely comparable.)

Enjoy the decline; and remember there will be rallies within the context of the overall downtrend, soon again will be fighting to break the 200-day Moving Average and proceed as outlined for July and early August. 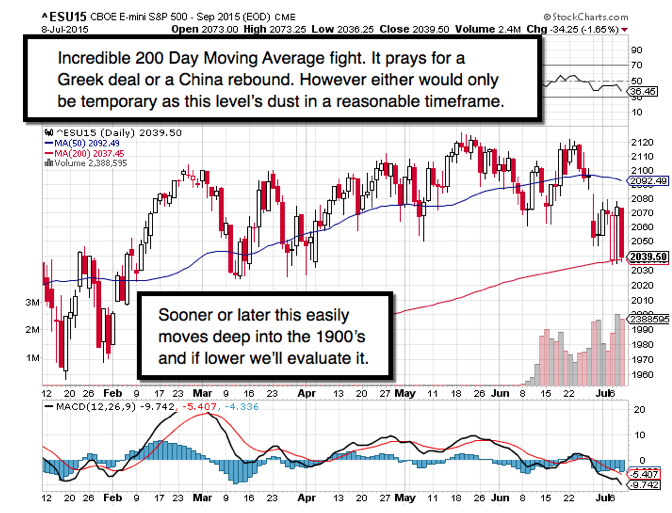 So for those who asked me today (yes a couple did) how to play China's downside my answer was as you'd expect: the easy money down there is behind; just as I say the same when they want to buy the Dollar or short the Euro even though I lean towards all those trends resuming soon (but they're not initiating; latecomers are belatedly realizing these are serious situations). 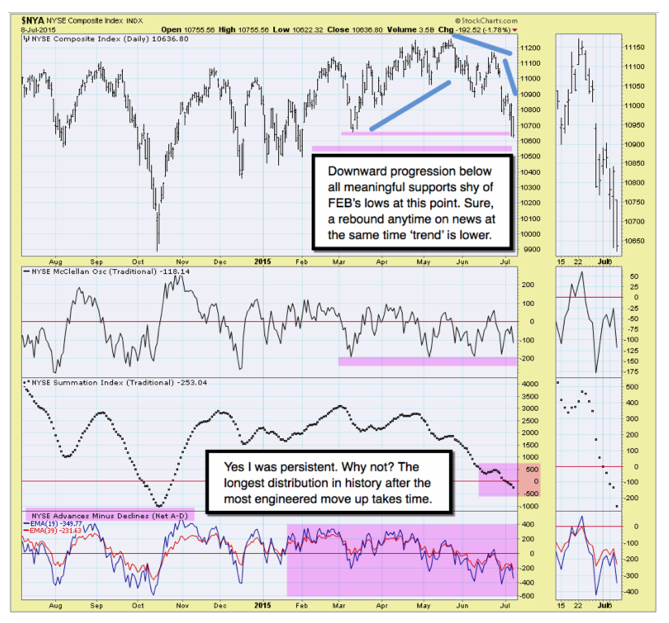 So while we don't ever want to 'panic' when others are panicking, we do want to allow 'trends in force' just to continue; and we sure don't want to become buyers when others panic, until it's clear one is not merely catching falling knives. That point hasn't arrived yet; and it may surprise people to hear that having allowed the Bull to wreck the China Shoppe, it may take (redacted).

Bottom-line: the internal top's been behind for weeks; not a new technical development. Rallies evolve as efforts to forestall technical breakdown, as threatened many times in recent weeks; and didn't affirm upside prospects. Now S&P alternates; technically affirming a (redacted) picture.