If you take the time to study the weekly charts you'll see that many of them have unwound those overbought oscillators quite a bit while price held critical support. The SP 500 has really unwound quite a bit and that's good news for the bulls. There are times when this amount of oscillator unwinding would have caused much deeper price erosion but since we're still in a bull market price at 2040 has found a way to hold. The monthly charts are still horrible. Hide the kids on those but at least the weekly charts are in better bullish shape. It doesn't mean we won't lose 2040 due to those monthly charts but at least half of the problem has been taken care of. The daily charts, the key index charts, have taken on more of a neutral to bullish look. Up and down in the base but overall not bad. Nothing to get overly excited about but clearly nothing bearish so the bulls can at least breathe a bit easier now that the daily charts held 2040 and the fact that we've seen solid oscillator unwinding on the weekly charts. The bull isn't dead yet.   So far the bulls have defended our key 2,040-50 2.5 Year Rising Support Line best seen off our Weekly chart below: 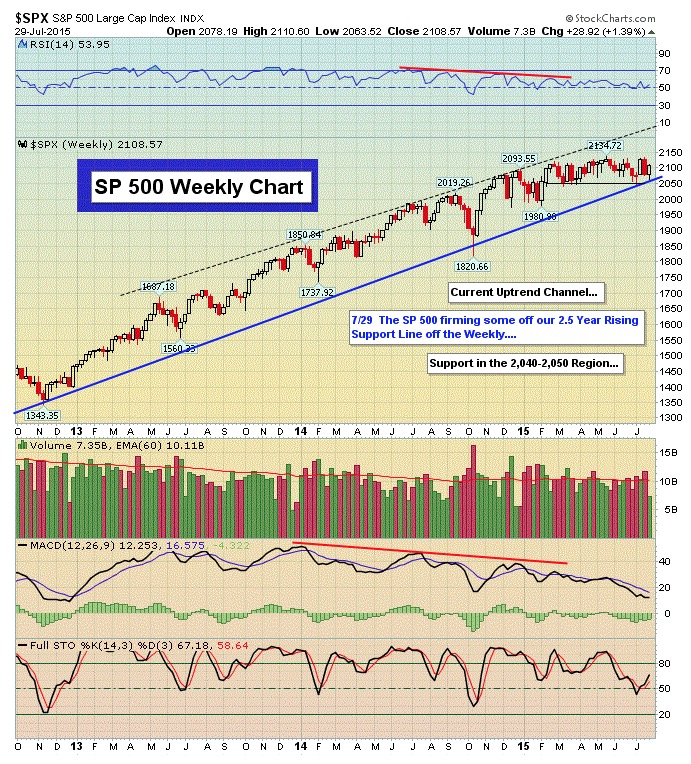 Three sectors that have been a nightmare for the market these past many weeks and months, the industrial, transports and semiconductors have turned the corner off their intense bear market runs. Strong gap ups with full candles yesterday followed by solid sticks today suggest that things are on the improve. Not bullish yet by any means but hopefully after some backing and filling, their lows are in. If this turns out to be the case it's going to be very hard for the bears to remove 2040 from the Sp simply because the laggards are now improving and even when they were terrible the bears couldn't get the Sp below 2040 with force on a closing basis. If the other sectors continue to move back and forth but hold their ground and we get the recent laggards to move higher the bulls should win the day with the breakout over 2134 but that remains to be seen. There is hope now that the recent bear market sectors are looking much better on their daily charts.  The Transport Daily took out a lot of that recent bearish sentiment clearing through our short term Downtrend Line seen on our Daily chart below: 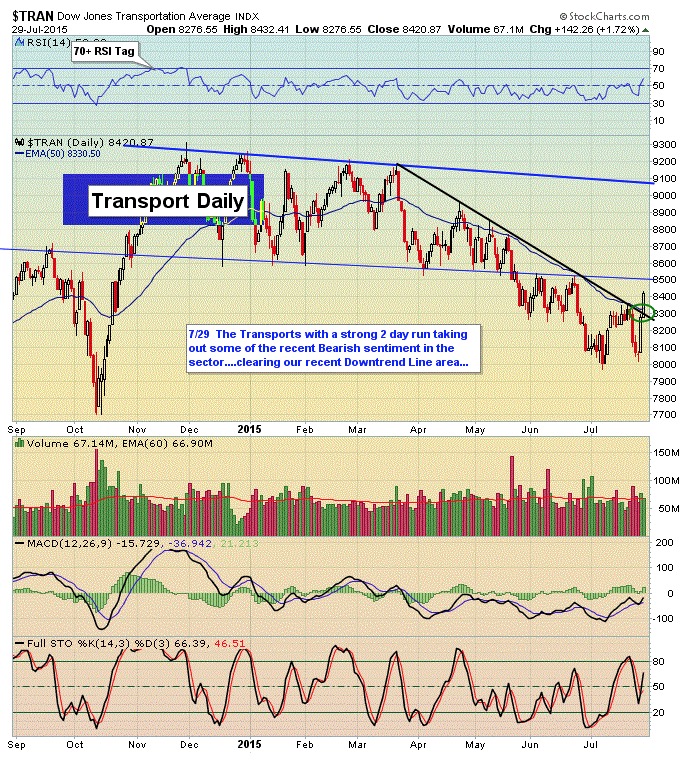 Solid price action continued in the Banks after the Federal Reserve meeting on rates showing firming off our 50 EMA Support area during the session and turning higher.  Hard to get too bearish when the Banks continue to show decent relative strength: 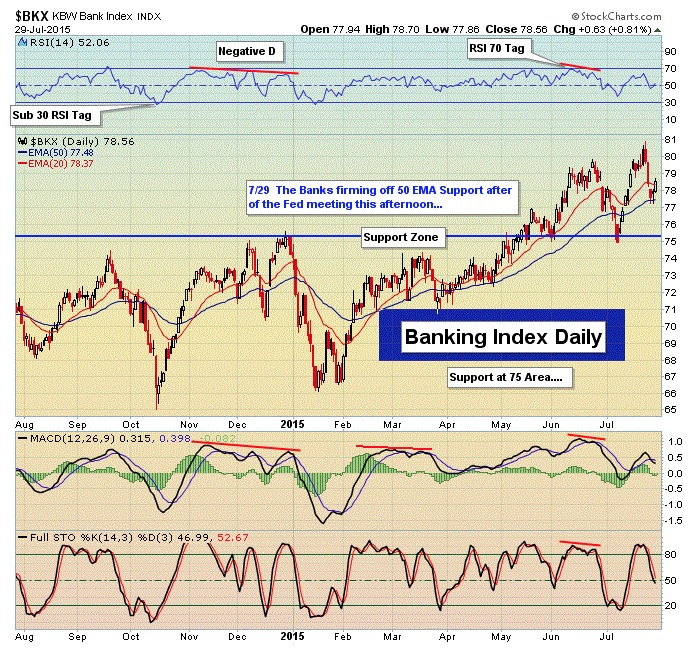 AAPL, the leader of leaders ins lagging badly and behaving poorly but this too isn't too much of a concern if the market can get key sectors rocking up that have lagged badly. Aapl is important but not so much that the market can't still rally. There have been many times in the past when Aapl went in to a bear market of its own but did not take the rest of the market with it. It's always one to watch. 122.00 is massive, key support and if that breaks a test of 118.00 is quite possible. We would look for bottoming sticks around that area hopefully but let's see what 122.00 does in terms of holding. If Aapl can bottom soon, somewhere between 118 and 122 then the bulls will have that one big weapon added to their arsenal along with the recovering recent bear market sectors just discussed. It's always important to watch  Aapl. Keep an eye bon 122.00 for the very short term.

Sentiment is finally improving. The bull bear spread is down to 25.8%, the lowest reading since last October I believe. Last week seemed to do some real damage to the thought processes of those frothing bulls. Even the number of bears increased ever so slightly which is really good news for the bulls. The bulls themselves also reigned in their intense frothy behavior. Fear is starting to enter the picture now whenever we sell off for a few days in a row. Let's hope this fear continues along every time there's even the slightest bit of selling. Remember, fear requires action. Froth requires no action. People will get fearful a lot faster than any other market emotion so it seems now that the longer we move laterally overall the easier it will be to unwind sentiment.

We offer a free 3 week trial at  www.TheInformedTrader.com