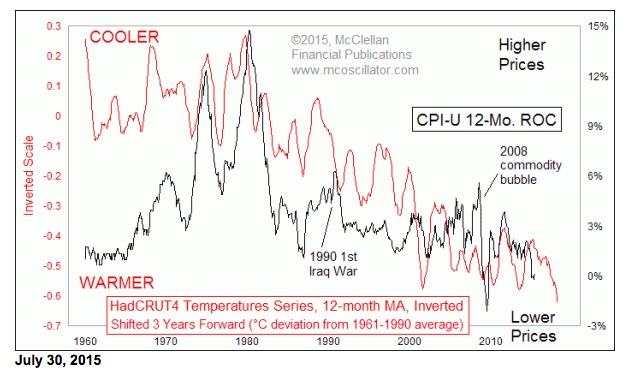 A commentator on CNBC recently stated that former Fed Chairman Paul Volcker is “revered” in the bond market for having slayed the inflation dragon.  While that version of history is widely believed to be true, and while then-Chairman Volcker did take aggressive action with interest rates, the causal relationship between Fed action and inflation rates has now been debunked by revelations from other data.

This week’s chart looks at a comparison between the CPI-U inflation rate and a global average temperature index known as HadCRUT4, which is maintained by the Hadley Centre’s Climate Research Unit at the University of East Anglia.  The temperature data plot has been inverted in this chart so that we can see the correlation better, and its plot has also been shifted forward by 3 years to reveal how the movements of global average temperatures get echoed about 3 years later in the inflation rate.

That 3-year forward offset of the temperatures plot is important, because with that shift made in the chart we can see that the movements of the CPI 12-month rate of change (ROC) tend to echo similar movements in the temperatures data from 3 years before.  Putting it more plainly, the movements of the inflation rate are not so much determined by whatever the Fed does now with interest rates, but rather they are largely affected by what global temperatures were doing 3 years before.

I write articles frequently about the comparisons of chart patterns between different data sets, and I hear all the time from readers who wish to admonish me that “correlation is not causation”.  Yes, thank you, I know.  But usually that phrase is uttered concerning two sets of data which are correlated with each other in real time.  When we see one set of data that largely matches the movements of another set of data from 3 years before, then that strongly hints at some kind of causation.  And irrespective of the actual cause and effect forces, my concern is much more with indication than with causation.  On that account, the temperatures data has pretty good answers for us.

This relationship does not always work perfectly.  Back in 1990, when Saddam Hussein decided to annex “Iraq’s 19th Province” (more commonly known as Kuwait), the price of crude oil doubled and that pushed up inflation in a way not modeled by the temperatures data.  And in 2008, the commodities bubble sent the inflation rates for a wild ride that also was not modeled by the temperature plot.  But in each case, the CPI-U ROC resumed its correlation once those exogenous forces took the thumb back off the scale.

What could explain this relationship?  One really good answer is that rising global temperatures are reliably associated with greater crop yields.  Here is a chart comparing a different temperature series from NASA to U.S. corn yields per acre. 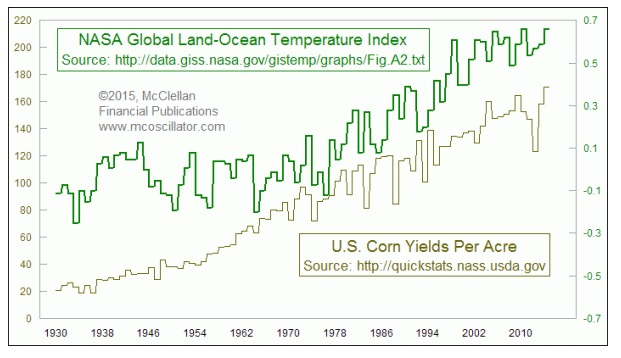 Corn yields have been trending higher in a big part due to better seed and fertilizer technologies.  But the ups and downs from year to year do seem to match the temperature swings.  2014 was supposedly a record year for global temperatures (although the satellite data disagree), and it was also a record year for corn yields in the U.S.

The way that this relates to overall inflation is that greater yields for corn and other cereal grains lead to lower food prices, which then flows through to lower inflation rates overall after a lag time.

In light of this revelation, we can conclude several interesting points, which some people will have a hard time accepting.

First, the Fed can only be said to control inflation via interest rates if one believes that interest rate changes now can somehow affect global temperatures 3 years ago. 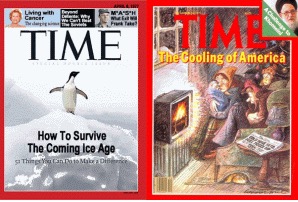 Second, if we were ever to see another period of global cooling like we saw in the 1960s and 1970s, then we should reasonably expect to see reduced crop yields, and higher inflation rates.

Third, if someone is arguing that we should take action to in some way try to bring about global cooling, then that person is also arguing for more famine and higher inflation, whether or not he knows that is what he is arguing for.

The final point is that we should all stop viewing the Fed as the controlling agent for the inflation rate.  The Fed can have some influence, because changing the cost of borrowing money does affect the cost of other “stuff”, but the much more important factor is what temperatures have been doing.