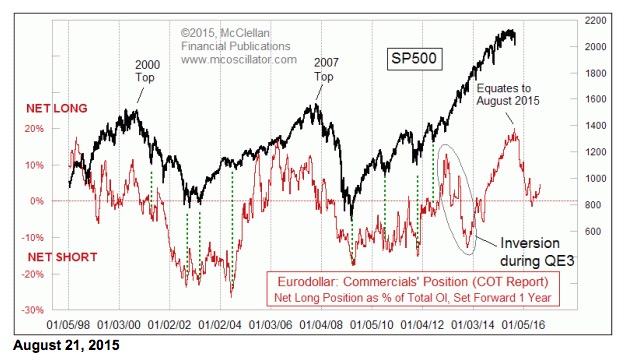 The ugly decline I have been forecasting for almost a year now seems to have gotten an early start, thanks to word of that forecast getting out to a larger audience.  I have never been accused of moving the market before, so this is a new experience, and it leads us to the question of what to do now in response to that movement.

To review, this expectation of an ugly decline comes largely from the leading indication we get from some data in the weekly Commitment of Traders (COT) Report, published by the CFTC.  We are looking at the net position of the commercial traders of eurodollar futures.  A “eurodollar” (ED) is not a currency product.  Rather, the term refers to dollar-denominated time deposits in European banks, so it is basically an interest rate futures product tied to the LIBOR interest rate.

We wished that we had discovered this relationship many years ago.  It has been “working” since about 1997.  Prior to then, the ED futures contract was not as widely traded, and so its message about future liquidity swings did not come through.  But it correctly had foretold the bear markets of 2000-02 and 2007-09, even though nobody knew about that message until we discovered this in 2010.  It has also correctly foretold other lesser movements along the way, not perfectly, but just incredibly well.

Since 2010, this leading indication relationship has been a regular part of our reporting in both our twice monthly McClellan Market Report newsletter and our Daily Edition.  And I have also featured it here in the Chart In Focus series several times (see links below).

This leading indication admittedly got into trouble in 2013, when it was forecasting a big drop which never materialized.  That was when the U.S. Federal Reserve was implementing its QE3 program, and dumping $85 billion per month into the banking system.  So the big deficit in the liquidity pool which the commercial ED futures traders had perceived was coming got papered over by the Fed.  One could argue that the Fed’s actions were a good thing, acting in a counter-cyclical fashion.  But it sure did disrupt the great leading indication.

Then in early 2014, the relationship started working properly again, as the commercial ED futures traders could more correctly model what liquidity was going to be doing, and as the Fed started tapering QE3 down to nothing.  It has worked really well since then.  The 2013 episode does help to portray the risk of using this tool; the Fed could intervene in a big way, like it did with QE3, and step all over the natural liquidity fluctuations which the ED COT data detect.

How big of a decline?  This leading indication tells about direction better than it tells us about magnitude.  But notice that this latest drop in the COT data went from a high level down to around zero.  That's about half of the magnitude of the drop in this indicator ahead of both the 2000-02 and 2007-09 declines.  That's a really crude approximation, but half of either of those ugly bear markets would still be a big deal.

So now that we are seeing an early start to the ugliness that was due in September, how should we interpret that?  This next chart zooms in closer on this leading indication relationship. 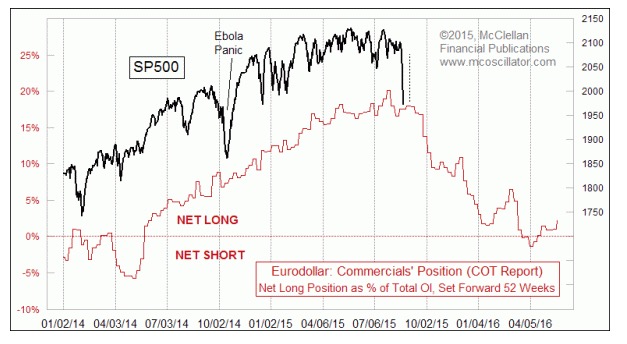 We can see here that the late-August drop is out of character for what the leading indication said should be happening.  It is somewhat akin to what we saw back in October 2014, when the Ebola Panic sent the market down much farther than it should have gone.  But that event is instructive because the market then rebounded just as strongly, working to get itself back on track.

There is one more peak just ahead on the ED COT pattern, what we might call a bit of a “right shoulder”.  So my expectation is for a relief rally which will set up for the more significant decline in September and beyond.  We won’t get out of the downtrending phase until early April.  And you can bet that by the time we get to April, the big themes in the presidential election campaigns will switch from immigration and new taxes to instead being about how we can get the economy out of the recession we are now entering.