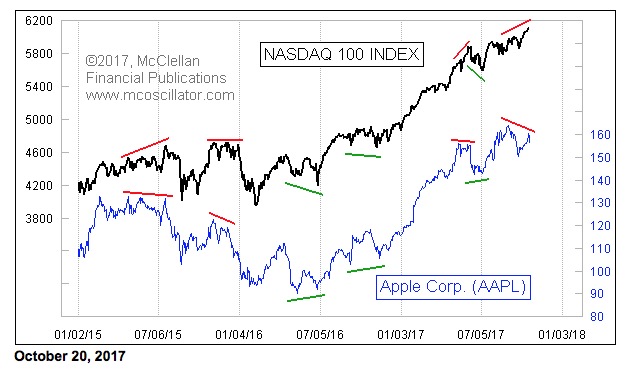 The share price of Apple Corp (Nasdaq: AAPL) is not making higher highs along with the Nasdaq 100 Index, and historically that has indicated a problem for the overall market.

AAPL is the largest component of the Nasdaq 100, and accounts for 12% of the index’s calculation based on the modified capitalization weighting of that index.  So it is natural that there is going to be a strong correlation in the price plots.  When the two are doing the same thing, that is what’s expected, and so it is not newsworthy.  It is when there is a difference in their behavior that we can get the useful information.

It used to be for many years that the share price of General Electric (GE) performed this role, as I wrote about in March 2013.  But that relationship has not been working well lately, as GE’s hiring of a new CEO is allowing for revelations of deeper problems at that company than many investors knew about.  Maybe GE will work again someday in that role, but it is not working now.

AAPL seems to have taken on that role as market bellwether, either confirming or refuting the action of the overall market.  AAPL share price last made a peak on Sep. 1, 2017, so we now have a divergence that is 7 weeks and counting.  One of the problems with this message is that it can take weeks or even months sometimes before it finally “matters”.  One other interpretational problem is that sometimes you can see an apparent divergence, and then AAPL moves in a way to erase that apparent divergence.  So it is with chart analysis; it is always easy in retrospect, but hard to do in real time.

For now, the inability of AAPL to join in making a higher price high is a problem, and says that the market is likely to recognize the error of its ways very soon.