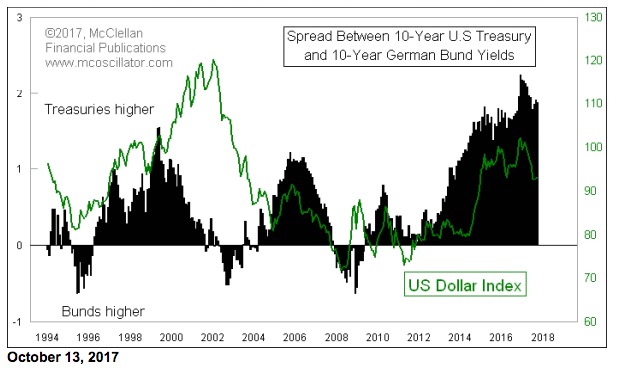 In Dec. 2016, the monthly closing spread between yields on U.S. 10-year Treasury Notes and the equivalent debt instrument from Germany was 2.24 percentage points, the highest reading we have seen since the 1980s.  As the spread has started to contract, we have watched the US Dollar Index make its biggest drop since 2011.

Those German bonds are known as “bunds”, which is short for bundes which means “federal” in German, as in the Bundesrepublik Deutschland.  This week’s chart shows that the Treasury-Bund spread is well correlated to the movements of the Dollar Index.  That is important to understand as we contemplate the still-high value for that spread.  In other words, the Dollar Index has a lot more room to fall as that Treasury-Bund spread heads back down toward parity.

One point to understand is that the strong correlation between the Treasury-Bund spread and the Dollar Index is a phenomenon that only goes back to around the mid-1980s.  The US Dollar Index was not even created until 1971, and in years prior the German mark was actually fixed at a 4:1 exchange rate.  German mark coins were even made from coin blanks identical to the U.S. quarter.  Germany also took a long time (understandably) to recover its economic strength after World War II, and so its debt understandably carried a higher yield for many years due to the default risk premium.  Here is a longer term chart of that relationship, which allows us to see that the relationship did not work very well in the earlier years of the Dollar Index. 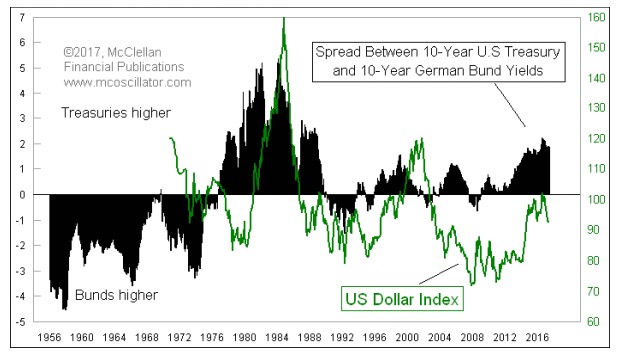 This big Treasury-Bund spread is not just a problem for the value of the dollar.  Back in June, I wrote about how it also has an impact for the stock market.  Here is an updated chart showing that comparison: 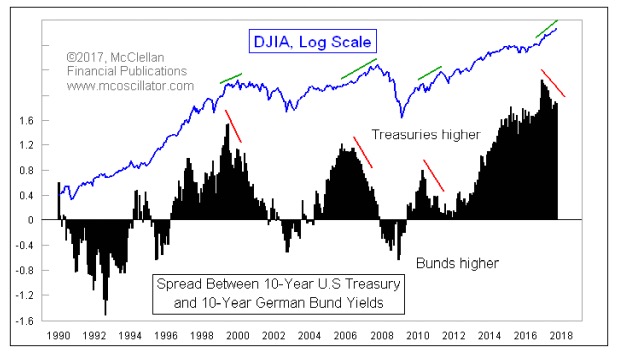 This is an admittedly small sample size for gauging how long of a divergence we should expect this time before the stock market finally turns down.  But if we go with that range of 12-16 months, compared to the current 10-month duration of the divergence, then there should still be a few more months before the Treasury-Bund spread’s downturn finally gets echoed in stock prices.