My first investment was plopping $3,000 into a Vanguard target-date fund in late 2005. I scrimped and saved as much as I could in the years following, working part-time jobs and internships through college.

All investors are impacted by the economic and investing environments that took place when they started. For me, foreign stocks and emerging markets were handily outperforming domestic indexes in the mid-2000s. Even after the Great Financial Crisis, the ex-U.S. market had a brief relative resurgence, eventually peaking on a relative basis in late 2010. Since then, the S&P 500 (or, more specifically, the Nasdaq 100) has been the place to be for monster absolute and relative returns. 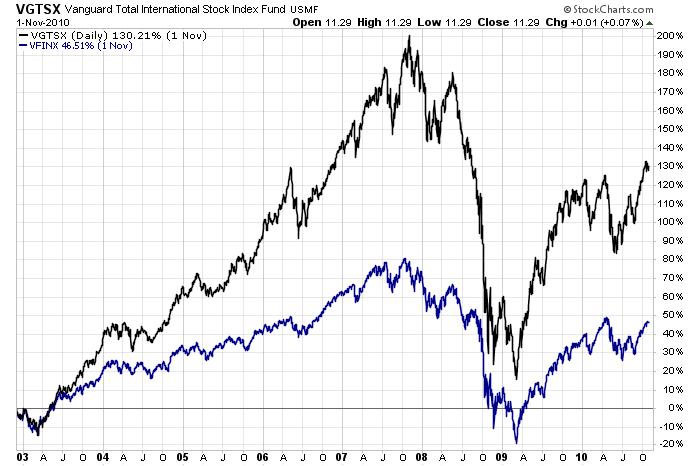 That first handful of years shaped me more than I realized. I always kept a sizable portfolio allocation to international funds while most other investors simply stuck with what they knew best — American companies. An overweight to foreign markets certainly helped my returns from 2005 to 2010, but it was a huge drag over the last decade-plus. 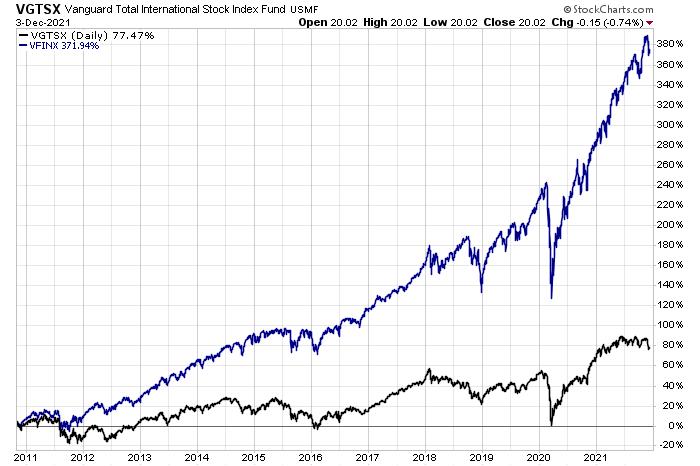 Moreover, I was influenced by the GFC and subsequent 2011 bear market. Compared to young investors today, I am probably more skeptical of huge stock market rallies. It was like I was groomed to believe that every 20% or 30% rise in stock prices would naturally feature a 10% or 15% correction in short order. Again, that might have helped me understand markets when I was in my early to mid-20s, but a bull market with limited drawdowns since 2011 led me to keep a little too much cash on the sidelines at times. Although the S&P 500 did drop about 20% three years ago, and who can forget the swift 34% plunge 22 months ago?

Hindsight bias is real, but so too is the home bias. It surely would've been nice to simply go with the S&P 500 and call it a day a decade ago, but c'est la vie. I take solace in knowing that, even with sub-par returns versus SPY and QQQ, I earned enough to become financially independent by age 33. 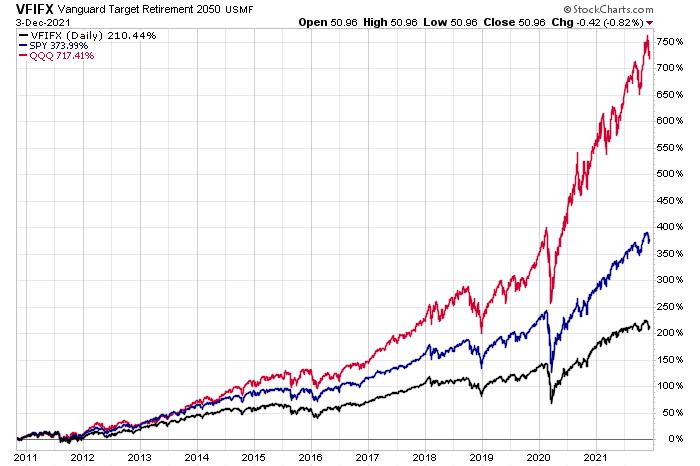 Advisors play an important role in keeping clients' investing behavior in check. It's even beneficial for advisors to have their own advisor! For most long-term investors, a systematic, hands-off approach sometimes works better than trying to get too cute and pick niches of the market to wager on. An advisor can also help mitigate individuals' biases. That is the behavioral alpha that is often studied by outfits such as Morningstar and Vanguard.

We, as investors, can be our own worst enemy. Few people have the temperament to successfully micromanage an investment portfolio. Sticking with a disciplined approach based on historical evidence (while still being open to new investing paradigms) is not easy, but a qualified fiduciary advisor can help design a plan that works for the long haul. About the author: Mike Zaccardi is a freelance writer for financial advisors and investment firms. He's a CFA® charterholder and Chartered Market Technician®, and has passed the coursework for the Certified Financial Planner program. Mike is also a finance instructor at the University of North Florida. Learn More
Blog Archives
Previous Article
Next Article