Energy (XLE) made a very important technical breakout on Wednesday and did so with increasing volume.  That's an excellent sign of a further uptrend.  The XLE now has important support at its rising 20 day EMA, currently at 56.90.  Initial price support is now at 58.26, the level of prior price resistance.  Here's the visual: 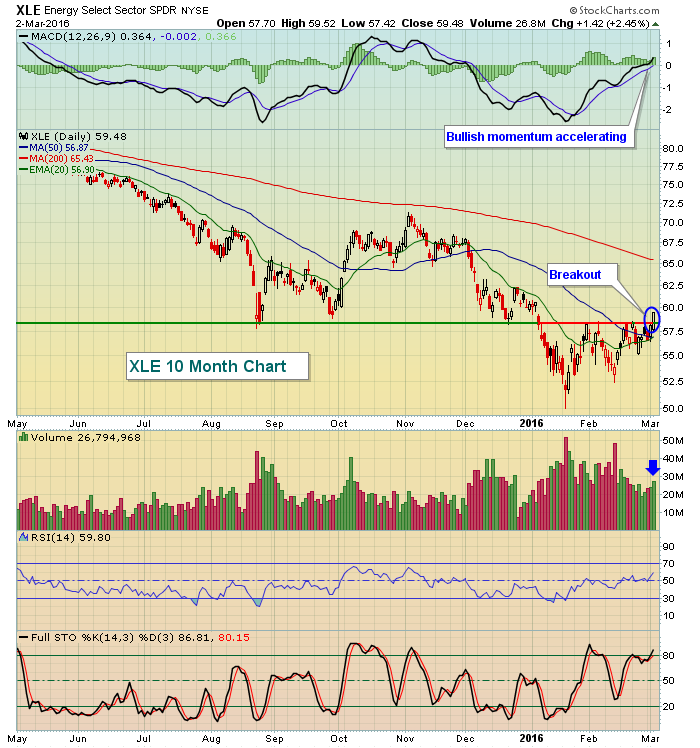 Outside of energy, banks ($DJUSBK) provided the financial stocks a lift by tacking on another 1.66%.  That was aided in part by another fresh recent high in the 10 year treasury yield ($TNX), which finished at 1.85%, just beneath a critical test of yield resistance at 1.90%.

There was clear strength in small caps ($RUT) as that index rallied more than 1% on Wednesday while others were closer to the flat line, but still higher.

Jobless claims were reported slightly higher than expected and Kroger (KR) topped bottom line estimates this morning, but the stock is lower by 8%.  Costco (COST) is also adding pressure in that area as it missed both top and bottom line expectations and COST is down a few bucks in pre-market trade.

U.S. futures are holding up fairly well, however, with only slight losses at this point.  It will be interesting to see how the market trades as we approach critical price resistance with an important jobs report on deck for tomorrow morning.

The Tokyo Nikkei ($NIKK) continued its strong recovery overnight, while the Hang Seng index ($HSI) fell.  In Europe this morning, we are seeing mostly fractional losses.  The German DAX ($DAX) did manage to close yesterday above its 50 day SMA for the first time in 2016 so the bulls will now try to hold that key moving average on any weakness.

To look at the current prospects for the market, I am going to reprint two S&P 500 charts from a month ago.  The first is a daily chart: 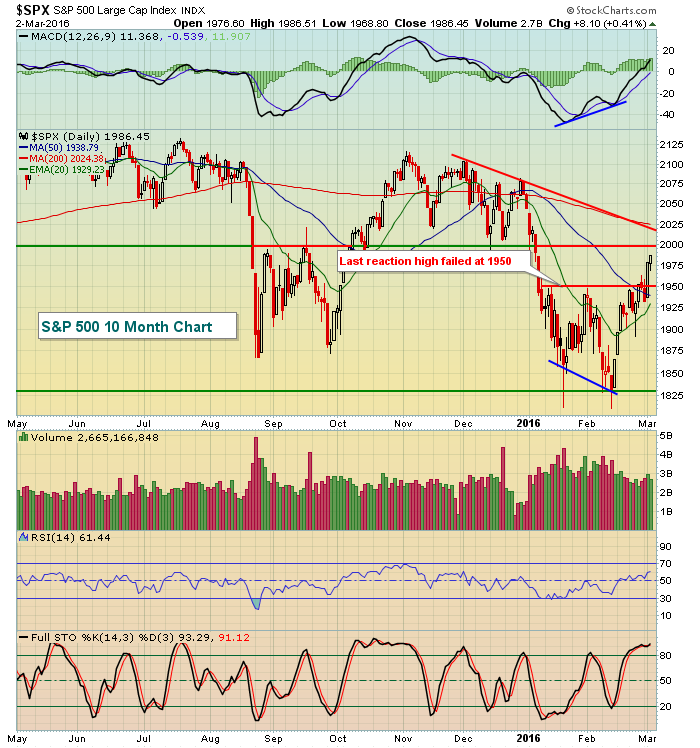 The 1950-1995 price levels were the two key areas to watch for possible reversal.  Thus far, the market rally continues into the middle of this range.  We'll see if tomorrow's jobs report can give the bulls enough ammunition to break above this zone.  If the S&P 500 does in fact breakout, the next question will be where is the leadership coming from.  For that, watch the following chart because so far we're seeing money rotate back toward aggressive areas, which is bullish.  Will it continue on a breakout?  That will be critical.  Here's the chart to watch:

We want to see all of these trends pushing higher as they represent signs that investors/traders are willing to take the risks necessary to drive a bull market higher.  If the S&P 500 breaks out and several of these relative ratios turn lower, it will likely be a warning sign.

Utilities (XLU) rebounded on Wednesday after nearly seeing a 50 day SMA test.  That level is important because of the recent negative divergence that printed on XLU's daily chart.  Here's a reminder of what this sector faced just one week ago: 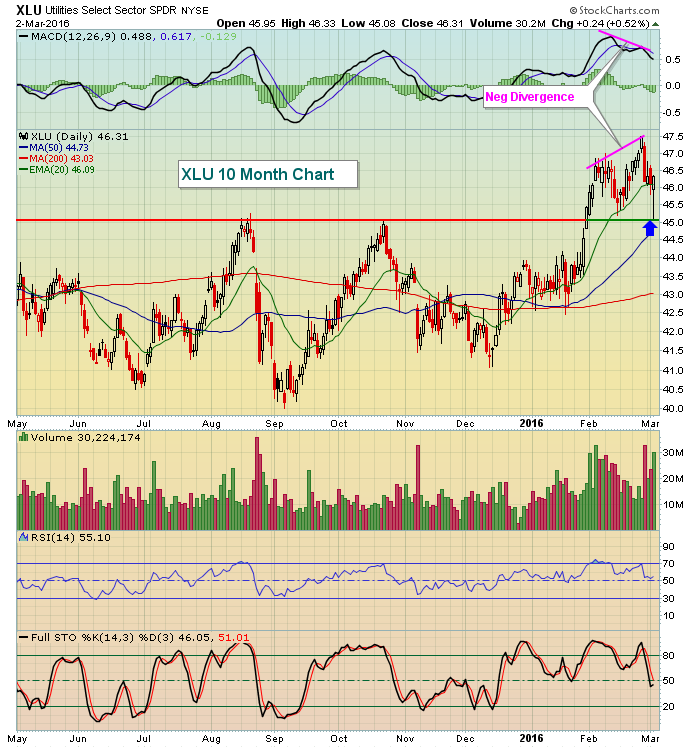 The level of the double top breakout became support and yesterday the XLU successfully tested that price before bouncing.  Now the trading range here is set at 45.00-47.50.

The bears are hoping that money inflows are subsiding and that tomorrow's jobs report shows a continuing deterioration in economic conditions.  Why?  Because after tomorrow, the historical calendar sets up beautifully for stock market weakness.  There are two periods during the calendar month where bears have enjoyed the historical advantage - one is from the 7th (Monday) through the 10th and the other is from the 19th through the 27th.  Keep in mind that the S&P 500's average annual return since 1950 is roughly +9.0%.  Here is a look at the annualized returns over those same 65 years from the 7th through the 10th:

While these numbers guarantee us nothing, it does appear to be a period of historical profit taking after the market moves higher during the first week of the calendar month as money inflows prop up prices.

February ISM non-manufacturing index to be released at 10:00am EST:  53.1 (estimate)