Utilities (XLU) were the only sector to finish in positive territory on Thursday, rising .59%.  The remaining eight sectors fell, led by materials' (XLB) .84% decline.  While the loss on Thursday was a problem for the materials bulls, weakness in the U.S. dollar ($USD) has resumed with the USD closing at its lowest level since mid-October.  That weakness comes amid a nice 2016 uptrend in the XLB that began January 20th.  In other words, this bout of selling could be setting up entry on the long side.  Take a look at the solid uptrend in play: 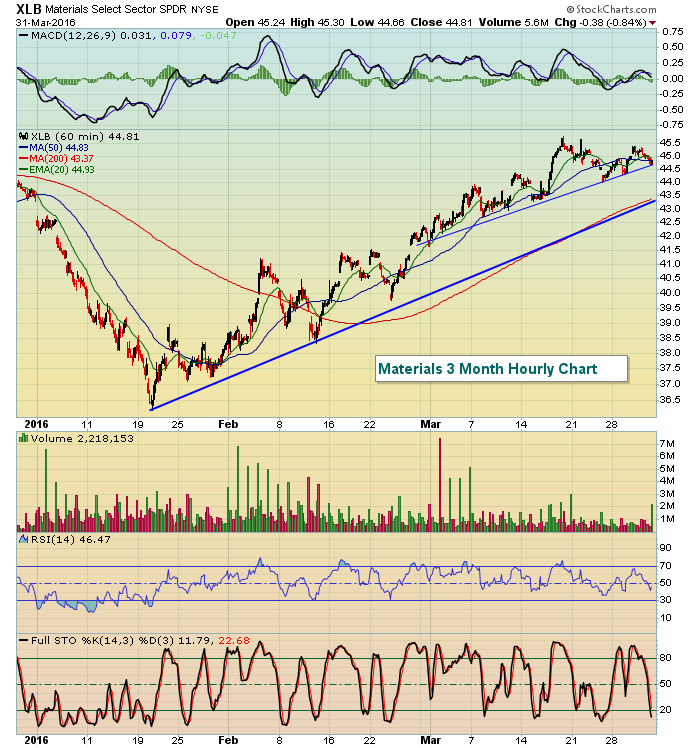 Among materials, silver ($SILVER) continues to struggle with overhead resistance near the 16.25 level.  Check out the multiple failures at that level in the past several months and the issues that remain for silver bulls: 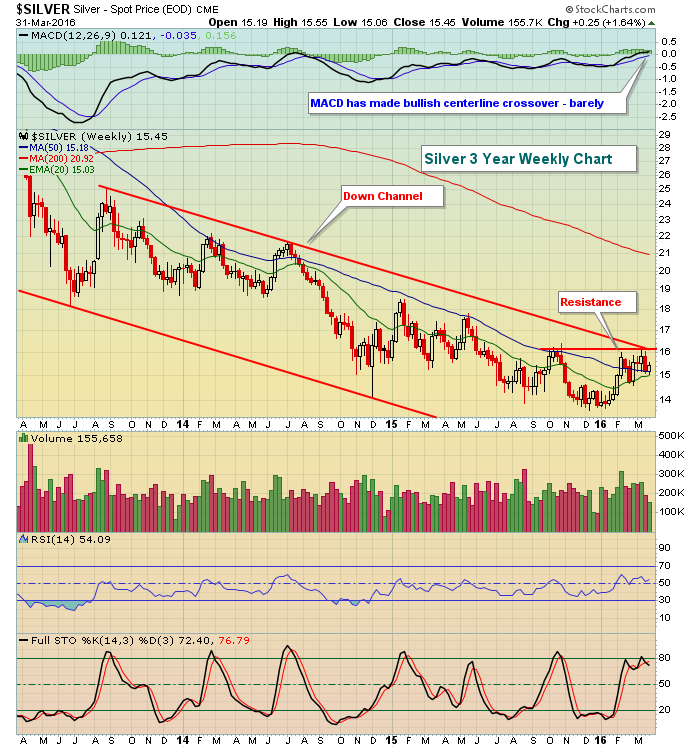 A breakout above 16.25 clears both short-term price resistance and the longer-term down channel trendline.  Given that the weekly MACD has just broken above centerline resistance, a price breakout would be a bullish development for silver.

Despite a slightly better-than-expected jobs report this morning, U.S. futures are lower, albeit off their lowest levels of the morning.  If the current futures hold up, we'll likely see stocks open with perhaps a 0.3% decline.

With the report, treasuries initially sold off with the 10 year treasury yield ($TNX) moving up to 1.81%.  The appetite for defensive treasuries has picked back up again, however, with the TNX setting another daily low at 1.78%.  I will be watching the TNX closely.  It has badly lagged the S&P 500 the past several trading sessions and needs to recover to provide more ammunition for equity bulls.

Because the market will be reacting to a key economic report today, below I've highlighted a few critical short-term levels to watch on the S&P 500: 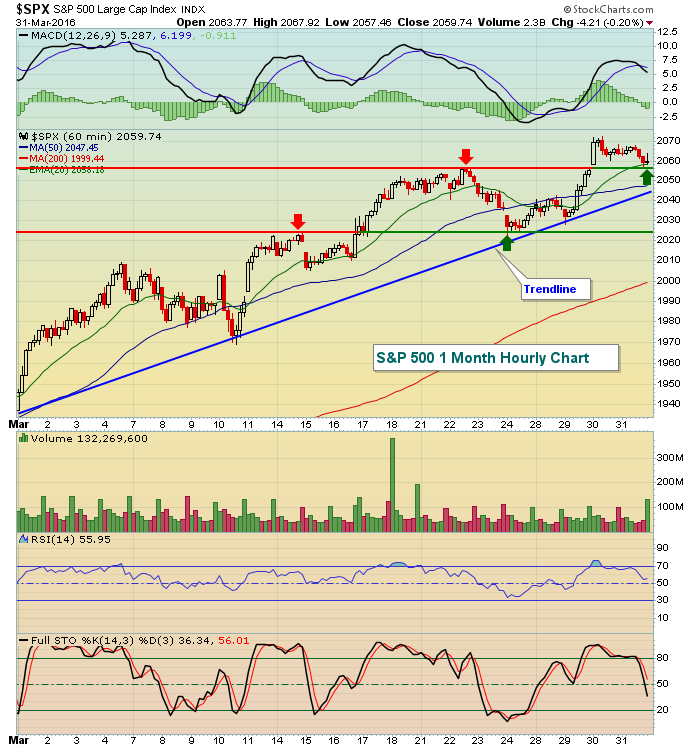 The upsloping blue line shows the nice uptrend that's been in play throughout March.  The two horizontal lines mark short-term levels of price support/resistance.  The initial level of price support near 2057 is likely to be lost at the open, but in the longer-term scheme of things, it's not really that big of a deal.  An uptrend requires a series of higher highs and higher lows, though, so the second level of price support close to 2024 is much more significant.  Not only does it mark price support on this hourly chart, but it also represents rising 20 day EMA support (not reflected above) on the daily chart.  There is a very slight negative divergence on the daily MACD so a break below that rising 20 day EMA would be significant from a trading perspective.

The best performing sector over the past three months has been utilities, gaining 15.51%.  All five of its industry groups have gained at least 12.50% over that span with Gas Distribution ($DJUSGU) leading the charge.  Here's the bullish weekly view of the DJUSGU, followed by the more cautious daily chart: 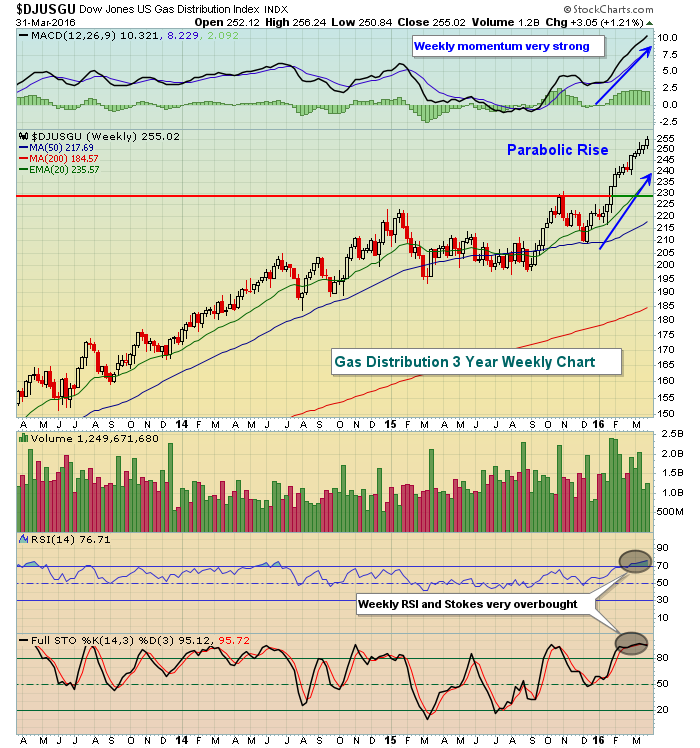 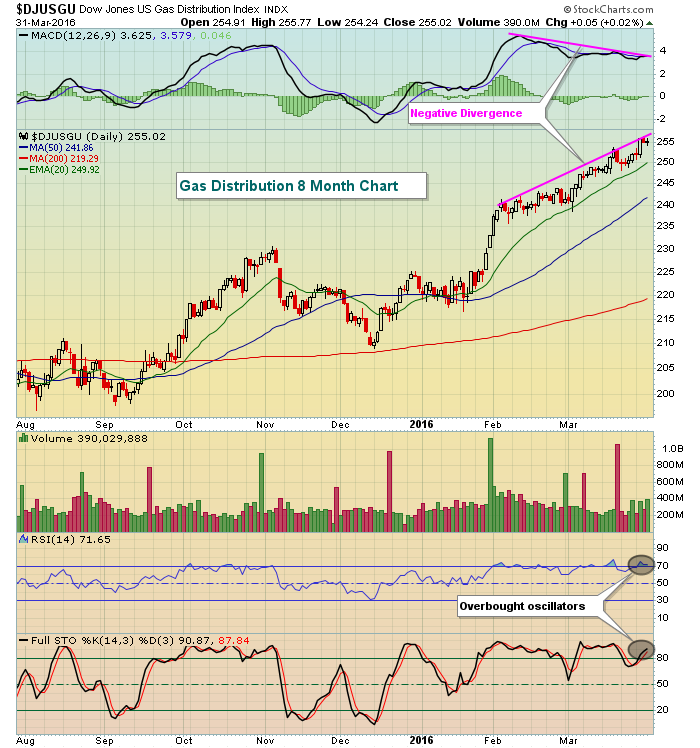 The DJUSGU is now overbought on both intermediate- and long-term time frames and a negative divergence has printed on the daily chart of the past several weeks.  While this industry group may continue pushing higher, I believe the reward to risk is now strongly in favor of taking profits and awaiting a daily MACD centerline reset for re-entry.

The first calendar day of the month on the Russell 2000 actually ranks as the fourth best day.  Here are the three calendar days that have fared better: