Volatile action continued as the UK referendum day approached.  Today, Britons are voting to determine whether Britain remains in or leaves the European Union.  There has been lots of back and forth action this week, although trading has been contained within a fairly narrow range.  One look at the SPY (ETF that tracks the S&P 500) and you'll see exactly what I'm referring to: 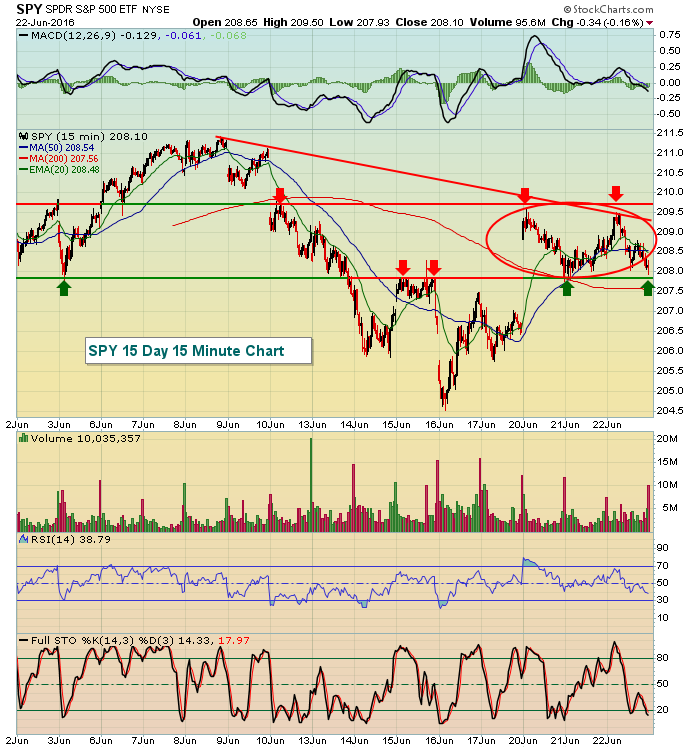 A break above 209.75 would seem to clear near-term technical hurdles and would allow the S&P 500 to advance further while failure there could set up yet another test of support just below 208.  The red circle highlights the back and forth action from the past few days within this trading range.

Gold (GLD) had a solid day on Wednesday and remains in a bullish uptrend, particularly on its weekly chart.  That weekly outlook is featured below in the Sector/Industry Watch section below.

Biotech stocks ($DJUSBT) bounced and helped to lead healthcare (XLV, +0.29%) on Wednesday, but that industry group remains quite challenged on its daily chart.  A deeper look into the DJUSBT is reflected below in the Current Outlook section.

Weakness was found in most sectors on Wednesday with all four aggressive sectors lower.  However, it was the weakness in crude oil prices ($WTIC) that sent energy (XLE, -0.56%) to the bottom of the sector leaderboard.  Despite yesterday's selling in the oil patch, the XLE remains quite strong technically and is clearly the relative leader this year in terms of sector performance.

It's Brexit day - finally!  Global markets will be able to fully price in the vote after today and the market can move onto other issues.  The 10 year treasury yield ($TNX) is up nearly 6 basis points to 1.75% and that's making a bold statement and should help U.S. equities, at least early in the session.  Dow Jones futures are cooperating and are higher by 153 points.  Bulls are hoping this isn't a repeat of Monday's session where we saw relief at the open, only to follow it up with weakness throughout the session.

Most global markets were higher overnight or are trending higher this morning, likely in anticipation of a Brexit vote that results in Britain remaining in the European Union.  A vote to leave the EU could result in a big reversal later today so watch the outcome closely.

I'm still waiting for various aggressive areas of the market to step up and lead the S&P 500 to a breakout to all-time highs.  Biotechs are one such group and the downtrend on a longer-term basis is quite obvious.  Take a look: 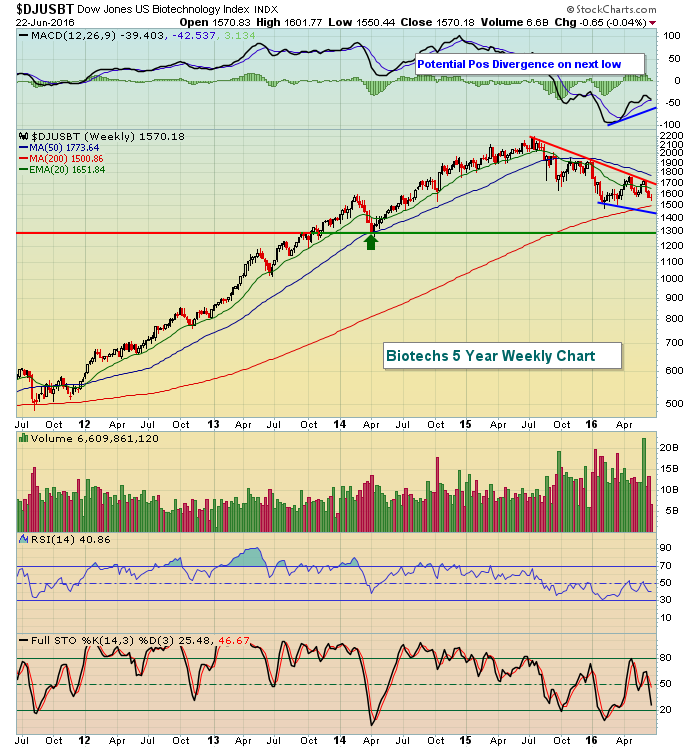 Biotechs enjoyed a parabolic rise in the years leading up to 2015 and are now paying the price.  I believe the longer-term uptrend remains in play, but that the current one year downtrend needs to play out.  I'd look for one of two things before I'd be long this group.  I need to see a heavy volume breakout above the red downtrend line OR another fresh low somewhere in the 1300-1400 area to print a positive divergence on its weekly chart (check out the blue lines above).  The April 2014 low near 1300 needs to hold to keep the longer-term uptrend intact.

Gold remains in a longer-term downtrend and as long as the U.S. dollar ($USD) holds onto support in the 92-93 area, I'd expect that downtrend to continue.  However, we do have to respect the bullish technical developments that have taken place in gold.  Check out this weekly chart: 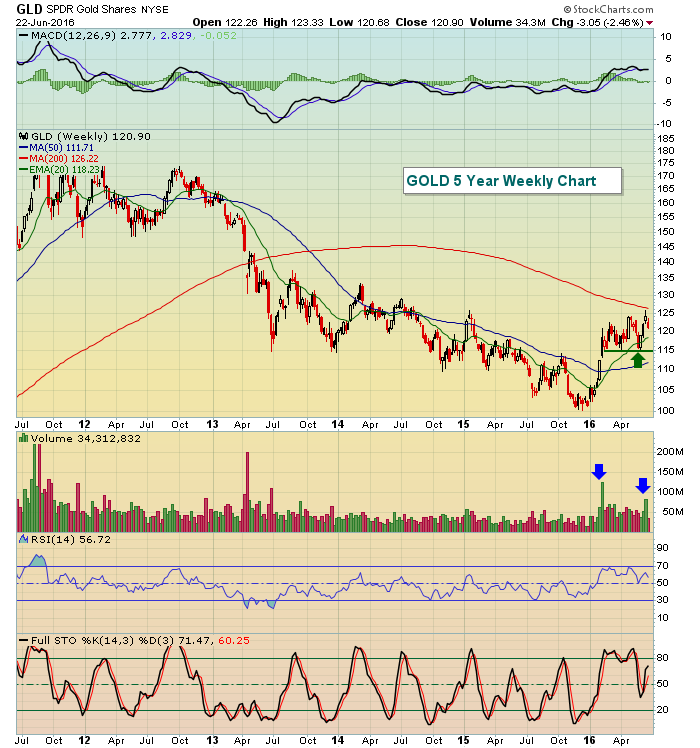 I don't believe the move higher in the USD is over.  Accordingly, I'm expecting this gold rally to eventually fail.  But it's difficult to argue the current trend higher in the GLD.  So I'd remain long, but I'd watch the rising 20 week EMA very closely.  A final line in the sand would be loss of price support close to 115.  A break above 125 on a closing basis would be bullish.

Semiconductors ($DJUSSC) are an important industry group within the technology sector.  I'm typically quite bullish the overall market when the DJUSSC performs well.  Unfortunately, seasonality could be an issue for this group during the balance of June and throughout July as the summer is not usually kind.  Check out the historical performance of the DJUSSC: 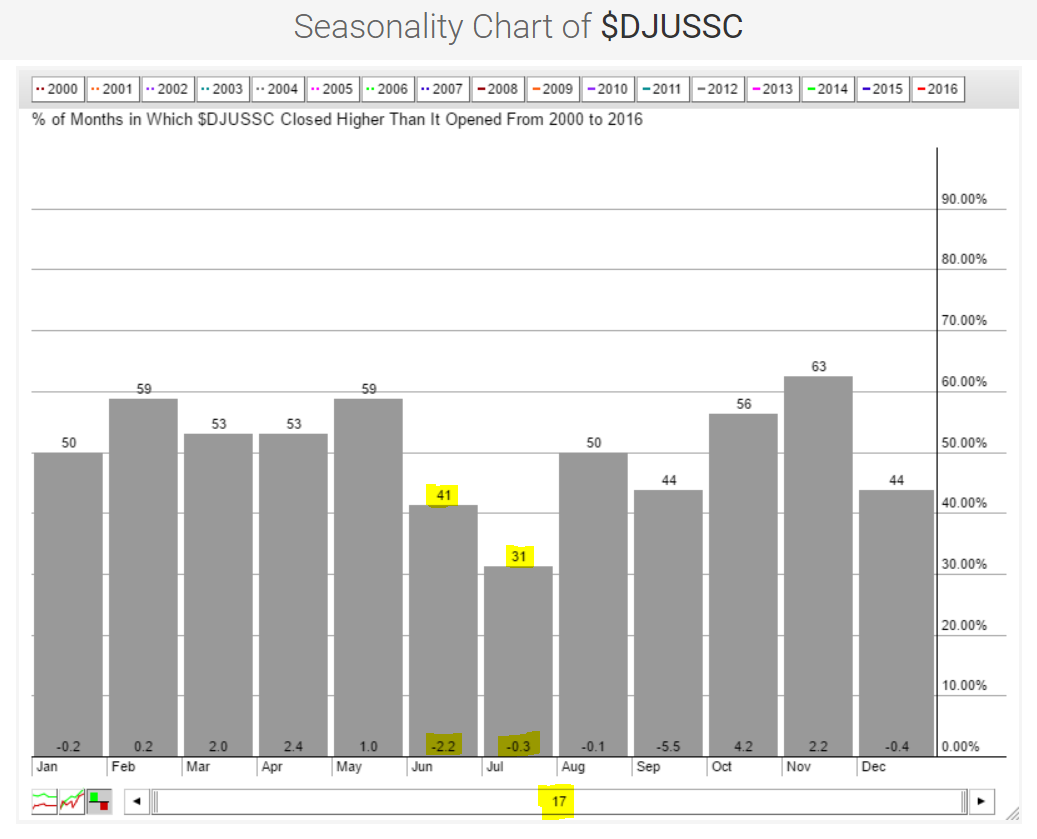 This represents performance of the DJUSSC for all the calendar months over the past 17 years.  The tendency for weakness during June and July is fairly apparent.