The market has spoken and we need to listen.  Volume on the S&P 500 totaled 4.5 billion shares and the index dropped a hefty 3.59% on Friday.  The Brexit vote clearly caught global markets by surprise with most market participants fully expecting Britain to remain in the European Union.  The vote to exit sent global markets reeling, including the markets here in the U.S.  It wasn't just the fact that selling took place.  It was the fact that losses were large, support levels around the globe were lost and volume was of the confirming variety.

The German DAX was down 1000 points, or roughly 10%, at one point on Friday.  That's crazy.  Bulls can argue that the DAX rebounded intraday off those lows to close back above 9500, but in my opinion, much technical damage has been inflicted and I see a drop in the DAX down to 8400-8500.  Expect the S&P 500 to follow suit as the correlation indicator tells us that the two indices tend to move hand in hand over time.  Check out this chart: 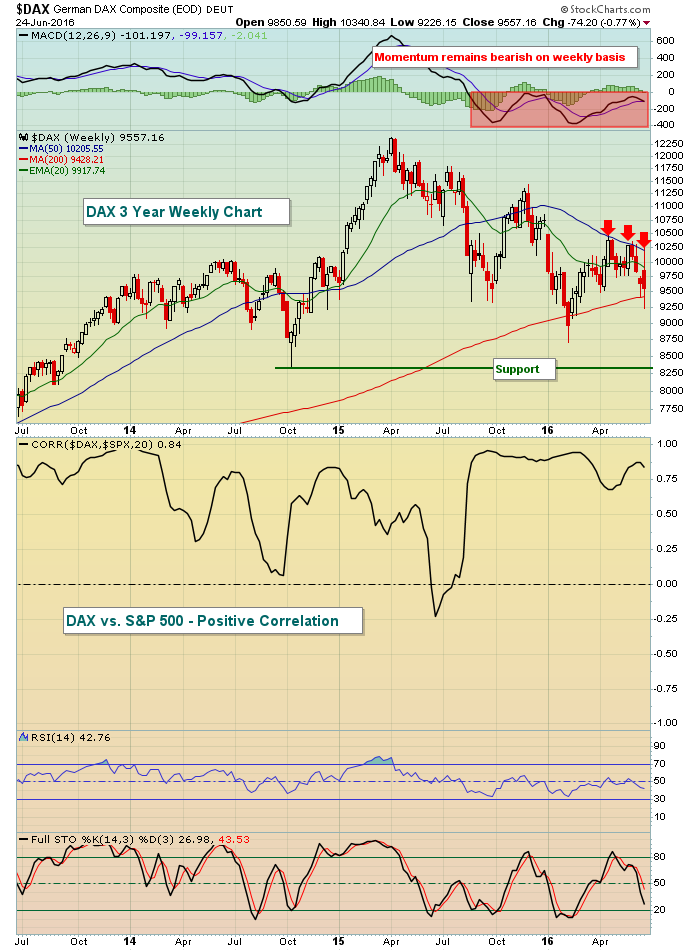 Note the red arrows that mark 50 week SMA failures the past several months.  Also, the weekly MACD has remained in negative territory for nearly a year.  So while the daily chart has shown periodic strength in the DAX, the bearish longer-term momentum remains in place and suggests lower prices ahead.  A test back in the mid-8000s cannot be ruled out.

Trading here in the U.S. on Friday was less extreme, but clearly quite bearish.  Heavy volume was bad, but the S&P 500 did manage to hold onto price support at 2025.  That could be gone at today's opening bell, however, and it appears it'll just be a matter of time before it's lost based on the technical outlook in global markets.

Banks ($DJUSBK) lost 290-300 support with gusto and that's problematic and suggests the likelihood of a recession and lower interest rates ahead is growing.  Here's the latest technical picture: 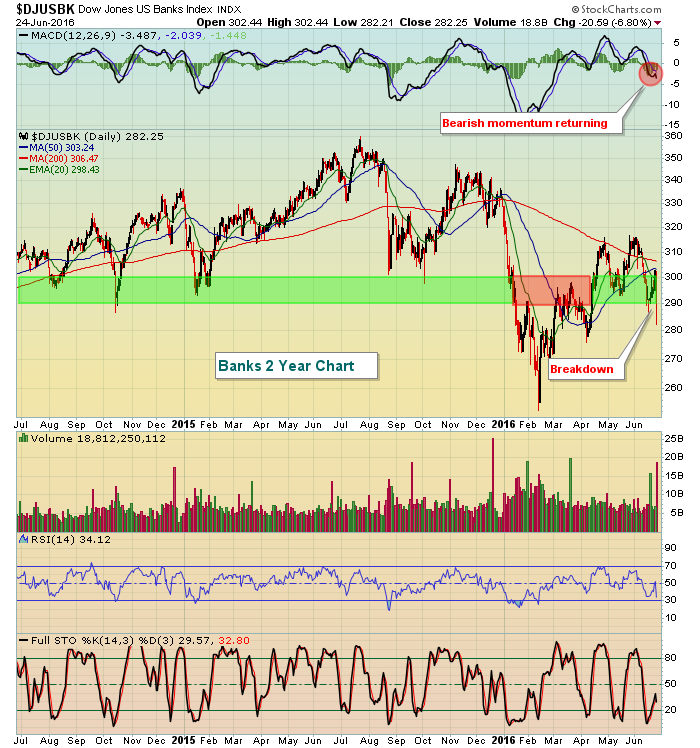 Volume soared on Friday to confirm that breakdown at 290 and points to the continuation of the downtrend that this group has seen since July 2015.

Utilities (XLU, +0.56%) were the only sector to gain on Friday as income-oriented traders looked to this defensive group as a safe haven that pays nice dividends.  REITs within the financial sector also performed well on a relative basis for the same reason.

Overnight, Asian markets rebounded, especially in Tokyo where the Nikkei ($NIKK) gained 2.39%.   However, that is not the case in Europe where indices there continue to suffer fall out from Britain's vote to exit the EU.  The pound has hit a 31 year low.

Dow Jones futures suggest we'll see a continuation of Friday's selling at today's open as the Dow is currently looking to open down roughly 100 points.  If it does, it'll be at its lowest level since mid-March, clearing the price support level established on May 19th.

High volatility is a bulls' worst enemy and the VIX surged an astounding 49% on Friday.  It's difficult to imagine that the market's fears simply go away after a one day rise like that.  Therefore, I'm expecting more stock market weakness here in the U.S. as the VIX likely moves up to challenge its early 2016 highs.  Here's the VIX level I'd look for and then we'll see how the market reacts: 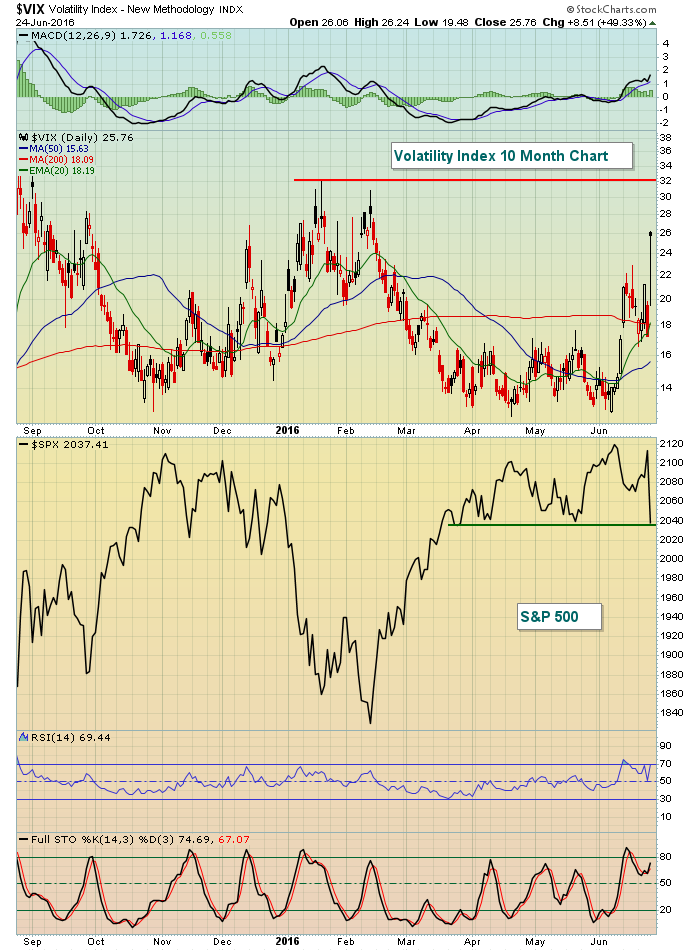 The rise in the VIX in early June warned us of possible S&P 500 weakness ahead and now the action is confirming those signals.  With a VIX currently in the 20s, impulsive selling is much more likely and the S&P 500 can lose points in a hurry in such a technical environment so please beware.  I would expect very quick and swift selling episodes in the near-term and of course we're in the summer period where it's typical to see market weakness.  Throw in all of the uncertainty over the Fed and the U.S. presidential election and I think it makes sense to remain cautious.  The bulls' best friend over the past several years has been the Fed, so don't be shocked to see the Fed try to stop the bleeding at some point, but any reprieve is likely to be temporary.

Auto parts ($DJUSAT) are part of the consumer discretionary space (XLY, -3.74%) and this group was pummeled, losing 7.73% on Friday.  The price breakdown and volume confirmation were rather obvious as the chart below shows: 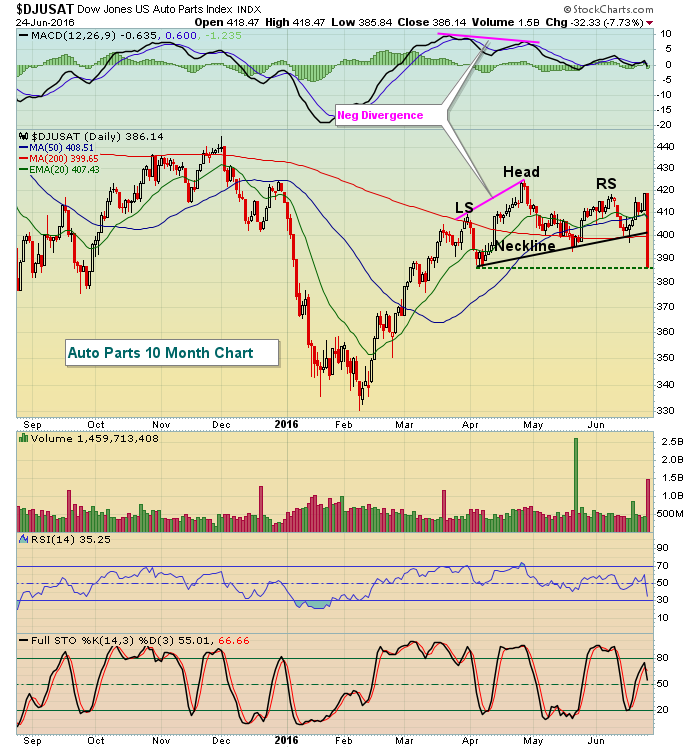 Friday's breakdown looks like a confirmed head & shoulders topping pattern.  I prefer to see a downsloping neckline that's broken on heavy volume, but technically Friday's action was quite bearish.  The green dotted price support line would provide a bit of hope for the bulls but one more poor day's action would likely clear that support.

The final four days of June will be interesting as many technical indications point to lower prices, especially if the S&P 500 loses price support at 2025.  From a seasonal perspective, small caps (Russell 2000) tend to perform exceptionally well as we close out June.  In fact, the June 27th to June 30th period shows an annualized return of 85.34% on the Russell 2000 since 1987 with roughly two thirds of the calendar days within this period higher.