Almost.  That's the word that came to mind while watching energy stocks into the close on Tuesday.  Yes, the group is in the midst of a significant short-term rally, but when given the opportunity to clear multi-month price resistance, they came up a bit short.  Energy (XLE, +0.64%) and consumer discretionary (XLY, +0.42%) showed relative strength on a day when U.S. stocks were searching for leadership, but the following chart highlights the technical issues ahead for energy and one of its key industry components: 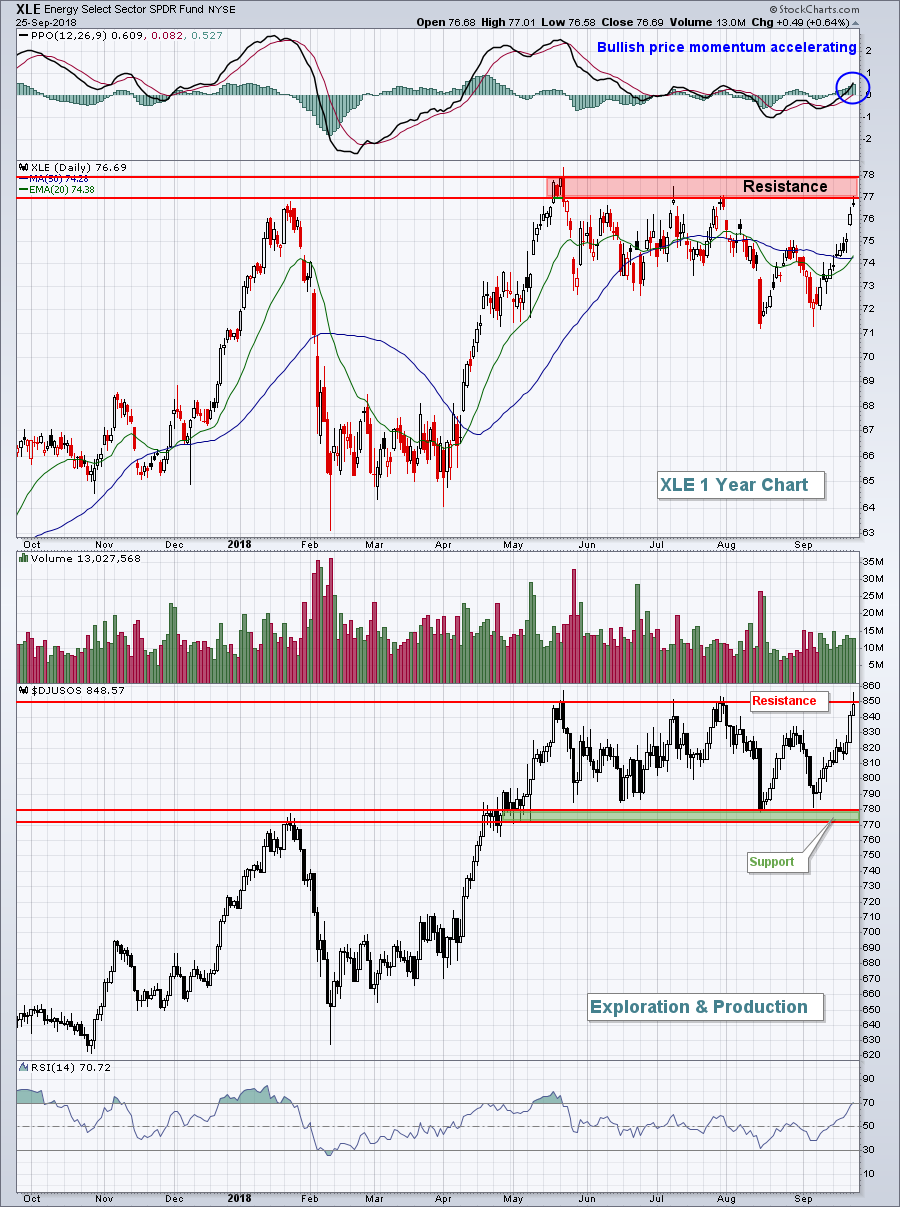 Exploration & production ($DJUSOS) was in breakout territory intraday, but as we've seen so many times before, they were unable to close the deal.  Price momentum is bullish and building, but will overbought conditions (RSI moving above 70) temporarily slow the parade here?  Energy bulls hope not because the DJUSOS has been the group's leader for months. 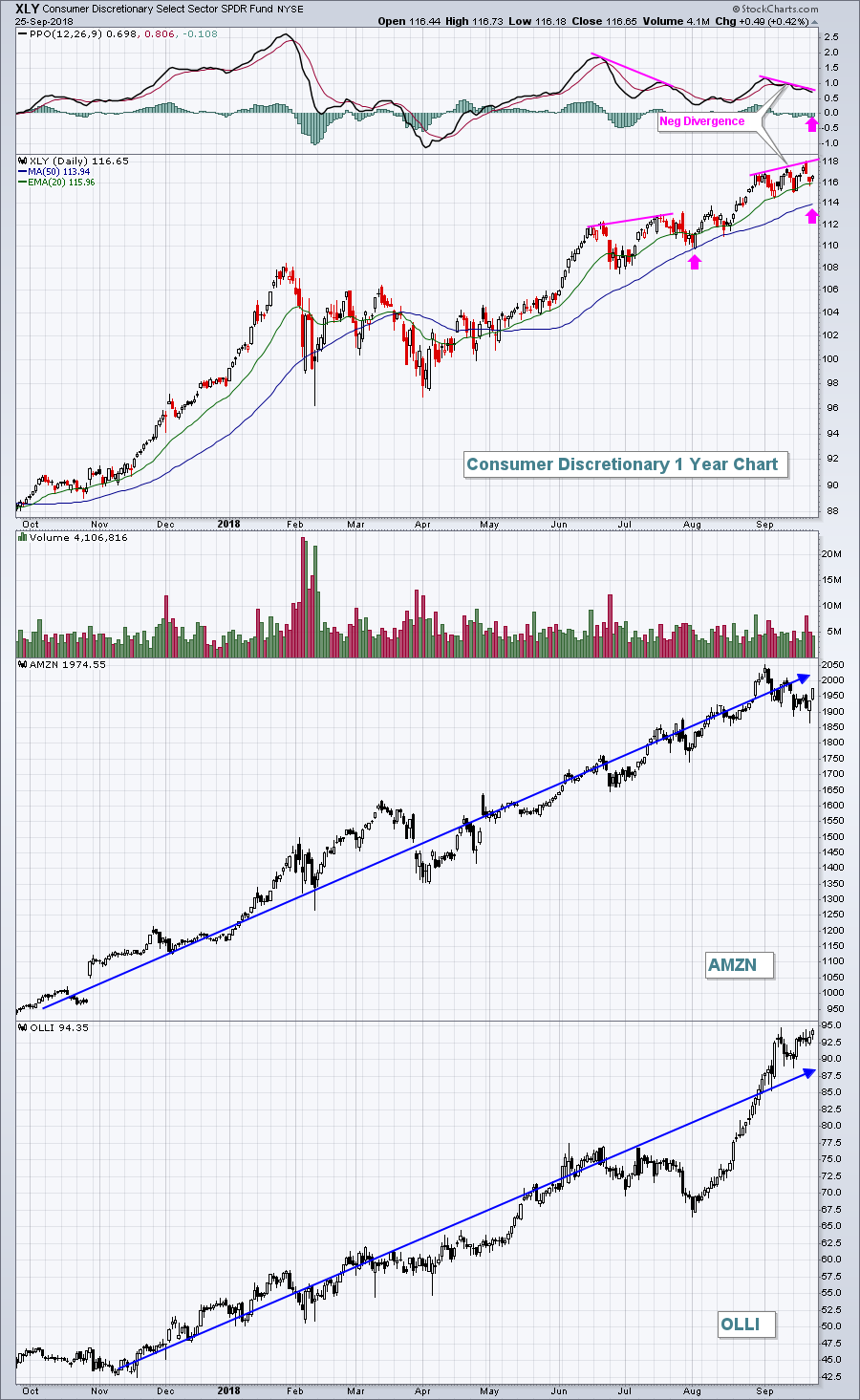 The one obvious short-term issue with the XLY is the negative divergence.  The PPO had only moved up to 1 at the top so we're not talking about a huge issue, but it is possible we'll see a 50 day SMA test/PPO centerline test (pink arrows) similar to what we saw in early August.  Nonetheless, both AMZN and OLLI remain outperformers in this space until proven otherwise.

Utilities (XLU, -1.37%) was easily the worst performing sector, spooked by the rapidly-rising 10 year treasury yield ($TNX), which tested multi-year resistance at 3.11% before settling at 3.10% at the close.  The FOMC ends its two day meeting today and is very likely to raise rates by another quarter point.

The treasury market is holding its collective breath as the Fed is set to deliver its latest policy announcement at 2pm EST today.  The 10 year treasury yield ($TNX) is at 3.09%, down slightly and just beneath key yield resistance at 3.11%, the 7 year high set back in May.  Gold ($GOLD) is down approximately 0.50% and is just below $1200 per ounce.  The yellow metal has been fluctuating around that $1200 level for six weeks and traders are awaiting a definitive break - either above $1220 or beneath $1180.  I say it moves lower as I continue to expect the dollar ($USD) to rebound.

Nike (NKE) reported solid results after the bell yesterday, but it appears to be a "buy on rumor, sell on news" event.  NKE traded at an all-time high prior to the earnings announcement and had risen close to 70% over the past year.  Don't be shocked by short-term profit taking, but NKE should remain on Watch Lists.

Asian markets continued to rebound overnight, while European markets are mixed this morning.

Dow Jones futures are higher by 26 points with 30 minutes left to the opening bell.

Financials (XLF) should be watched closely today.  First, we have an FOMC meeting that will result in a 2pm EST announcement this afternoon.  Financials are positively correlated with the direction of treasury yields.  It's a foregone conclusion that the Fed will raise rates a quarter point today, but their language is always a variable.  How many more hikes are they expecting?  And when?  Those discussion points can trigger big moves in treasury prices and yields and those moves will likely determine which way the XLF heads.

Technically speaking, I'm looking for a short-term bounce in the XLF, which would likely provide a boost for our major indices, but particularly the Dow Jones and S&P 500.  The XLF has fallen the past few days, and yesterday tested its rising 20 day EMA: 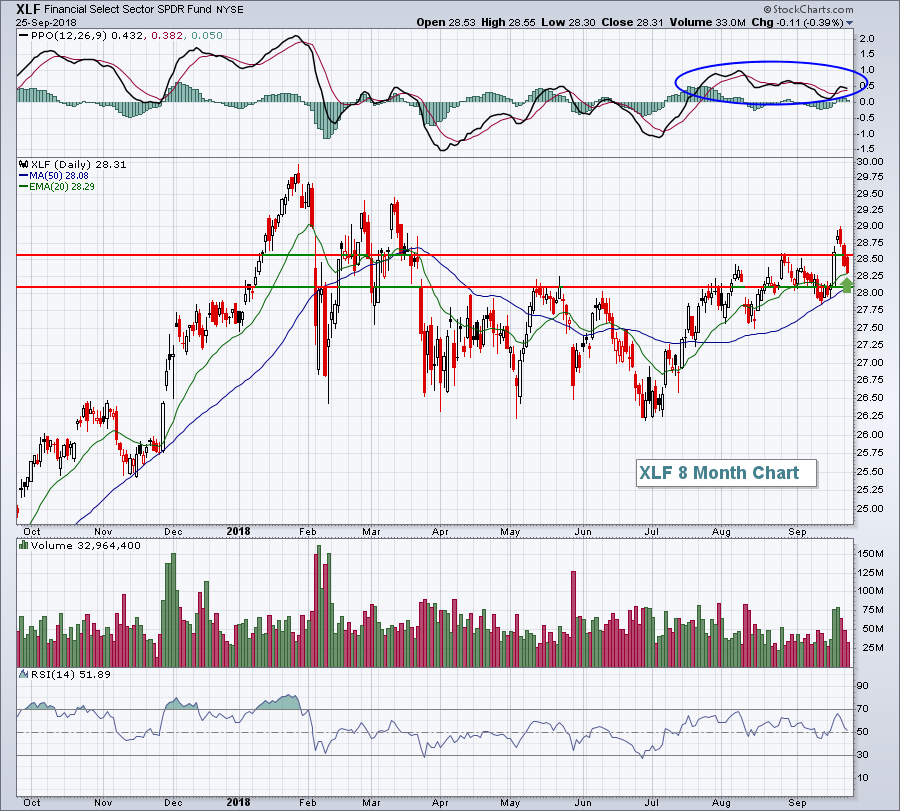 The PPO has resided above the centerline for more than two months, a signal that the bulls remain in control - and not just temporarily.  During previous 2018 rallies where the PPO has bullishly crossed its centerline (from underneath to above), that momentum didn't last.  This time, it's showing staying power and that's good news for the bulls.  The group did just fail to hold onto its breakout level near 28.55, but the rising 20 day EMA support is more likely to hold.

But then there's the Fed today, so let's see how things develop.  An intraday breakdown followed by an afternoon reversal would be very bullish from a technical perspective.

I was looking at industry groups this morning that had lost ground over the past month while our major indices have moved higher.  We all should know by now that sector and industry rotation are normal occurrences.  So my "task" was to try to uncover an industry group that has struggled in the near-term, but remains quite healthy in the longer-term in order to find potential trade candidates.  Here's a group that we might consider: 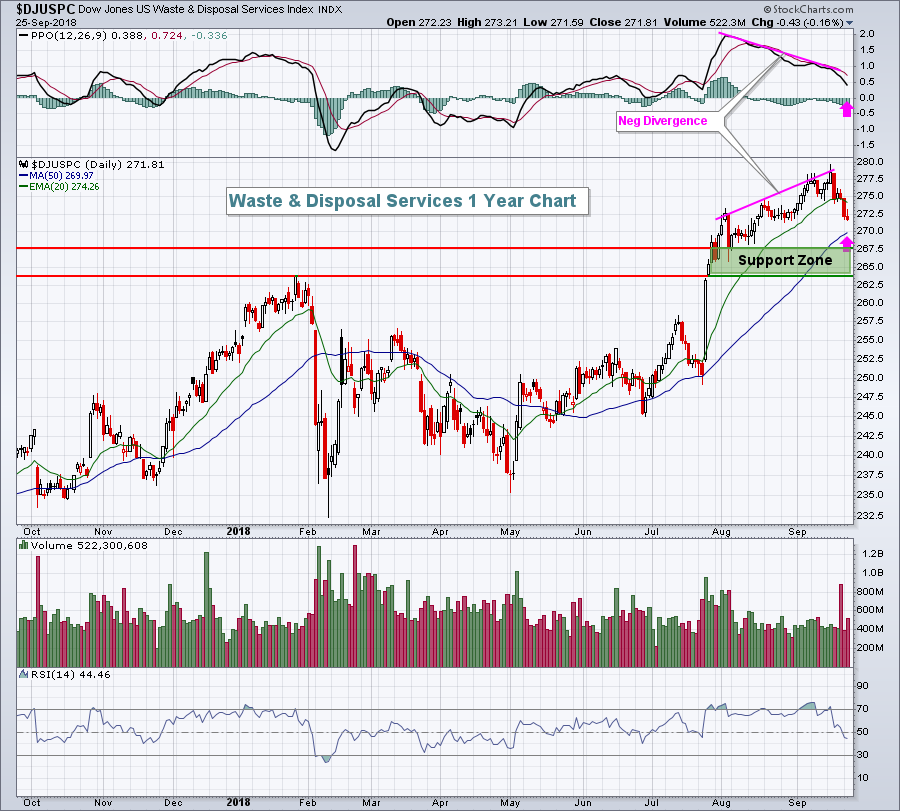 The daily chart shows we have a momentum issue that could take us a bit lower, possibly even down into that support zone from roughly 263-268.  The weekly chart confirms this as a solid area of support: 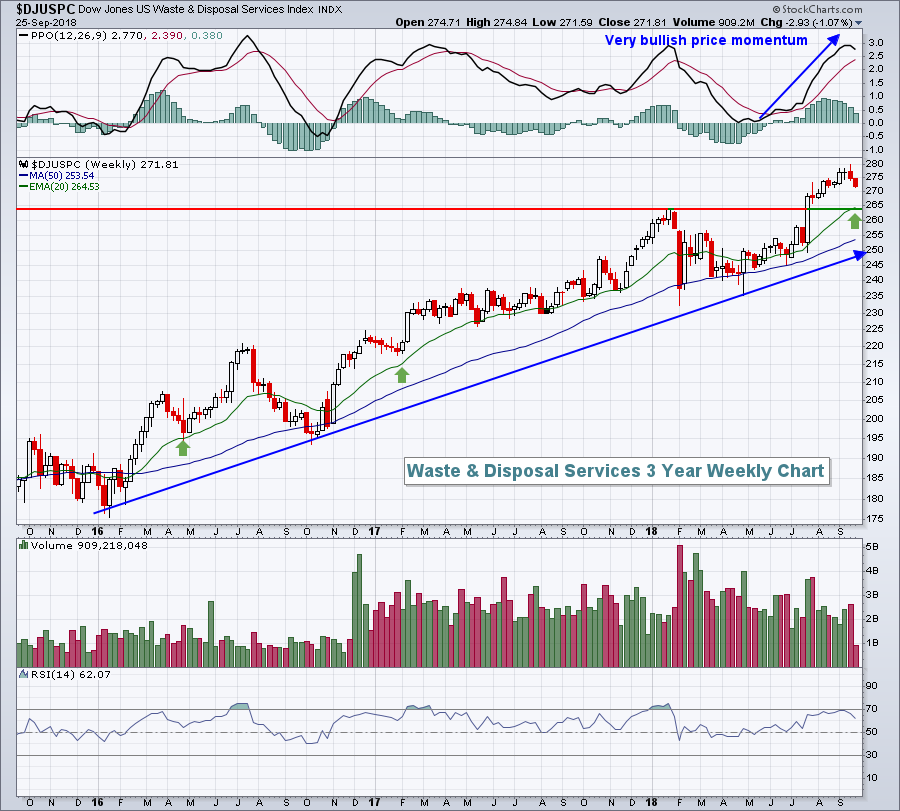 The PPO has exploded to the upside from centerline support, similar to Q1 2016 and Q4 2016.  In both instances, pull backs to or near the rising 20 day EMA (green arrows) provided excellent entry opportunities just prior to another advance.  So the combination of price support near 264, combined with the rising 20 week EMA, currently at 264.53, would suggest an excellent reward to risk entry if we see additional short-term selling.

As one final note, the DJUSPC loves Q4 from a seasonal perspective, averaging a 7.6% gain during Q4 over the past two decades.

Airlines ($DJUSAR) lost their 20 day EMA support yesterday for the first time in two months as a negative divergence weighed on the group technically.  We could see a 50 day SMA test to "reset" the PPO at or closer to its zero line.  If that's the case, the reward to risk will improve dramatically for this industry.

Delta Airlines (DAL) has risen during 11 of the last 12 Octobers, averaging a monthly gain of 11.6%.  It also has performed well in November and December, where it's averaged gaining a combined 9.0% over the past dozen years.  So yes, that's more than an average 20% gain during Q4 over a 12 year period!