The FOMC raised its fed funds rate a quarter point at 2pm EST yesterday as expected, but as usual, it's not what the Fed does, it's what it says.  Perhaps the most significant part of the Fed's prepared remarks was where it changed its wording from the previous meeting to remove "accommodative", referring to its stance on a forward looking basis.  After a knee-jerk reaction higher, the market's "true reaction" surfaced and we saw nearly two hours of selling into Wednesday's close.  The 10 year treasury yield ($TNX), at very significant yield resistance near 3.11%, fell as we might expect it would, closing at 3.06%.  A short-term top in the TNX would provide short-term headwinds to U.S. equities as money would likely rotate out of the more aggressive equity market and turn more defensive.

The obvious loser in the Fed's remarks and the resulting drop in the TNX was financials (XLF, -1.20%).  The bottom of its industry group leaderboard wasn't very surprising either.  Banks ($DJUSBK, -1.60%), investment services ($DJUSSB, -1.43%) and life insurance ($DJUSIL, -1.24%) all have strong historical positive correlations to the direction of the TNX.  So failure at a key yield resistance shouldn't be good for these industry groups....and it wasn't.  Banks closed at two month low: 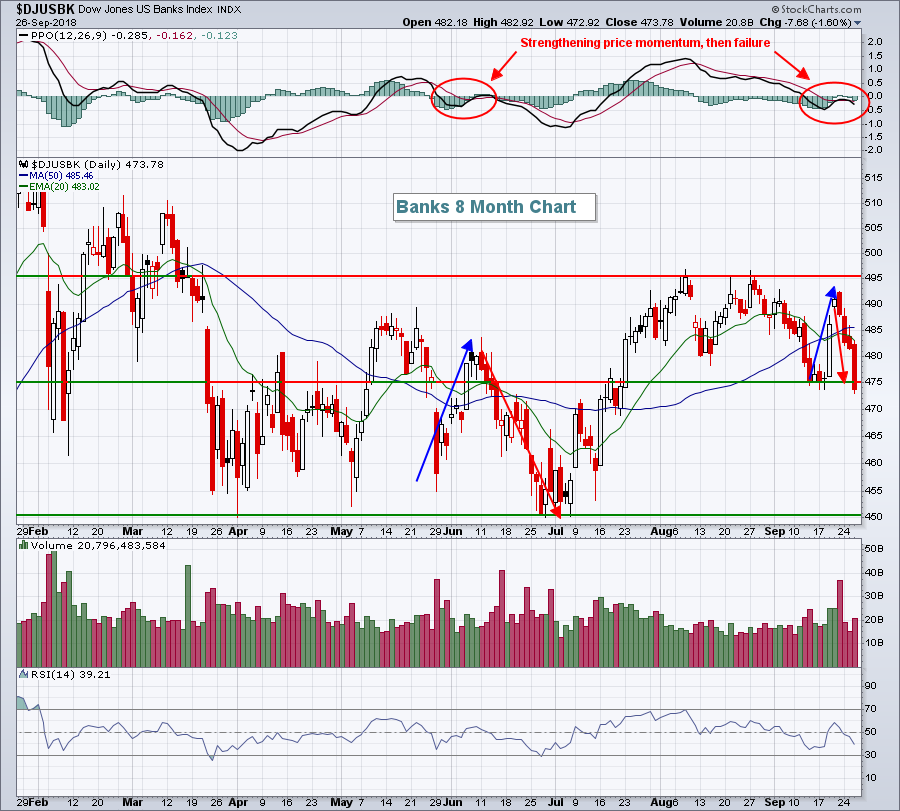 We've seen price momentum fail before with the PPO just beneath its centerline (June) and it wasn't pretty.  After failing again this week, we have to wonder if we'll see a repeat of bearish price action.  Yesterday marked the fourth day of selling after we approached a key price resistance level.  And given the new short-term closing low, technical analysis would suggest the sellers are clearly in control.  There's a bit of price support near 470, but a close beneath that level could lead to yet another frustrating test of price support in the 450s.  We have seen a ton of those in 2018.

Consumer discretionary (XLY, +0.23%) and healthcare (XLV, +0.22%) managed to hold up relatively well despite the final two hours of selling.

Crude oil ($WTIC) and the U.S. Dollar Index ($USD) are both higher this morning, while gold ($GOLD) is trading lower.  The 10 year treasury yield ($TNX) began the morning in negative territory, but it's rebounded and is now slightly higher at 3.07%.

Durable goods was much stronger than expected, but this number is extremely volatile from month-to-month.  Meanwhile, wholesale inventories rose 0.8% after jumping 0.6% in the prior month.  Depending on your view, this can be seen as bullish (building inventories to accommodate higher sales) or bearish (too much inventory could signal a slow down in orders if the inventory isn't consumed fast enough).

Overnight, Asian markets were mostly lower after the FOMC announcement, while European markets are fractionally higher.  Dow Jones futures are higher by 32 points as we approach the opening bell.

I've learned over the years that, from a big picture perspective, two things really matter.  Earnings and Fed policy.  Earnings have been strong and I believe we'll see very solid results when the next earnings season begins in earnest in the third week of October.  So that's check mark #1.  Personally, I believe Fed policy is bullish as well.  Yes, we're going to see higher interest rates.  That was made abundantly clear yesterday when the Fed said there'd likely be another rate hike in 2018 and that we should expect 3 more in 2019.  From purely a common sense perspective, perhaps 4 rate hikes would have us pause and wonder how our economy will withstand the barrage of hikes.  The hikes, however, are a sign of growing optimism among the Fed that our economy will continue to strengthen....and rates are still extremely low from a historical perspective.  The last time we saw rates this low and on a path higher was the 1960s.  Look at the S&P chart at that time with a few annotations discussing Fed policy during those years: 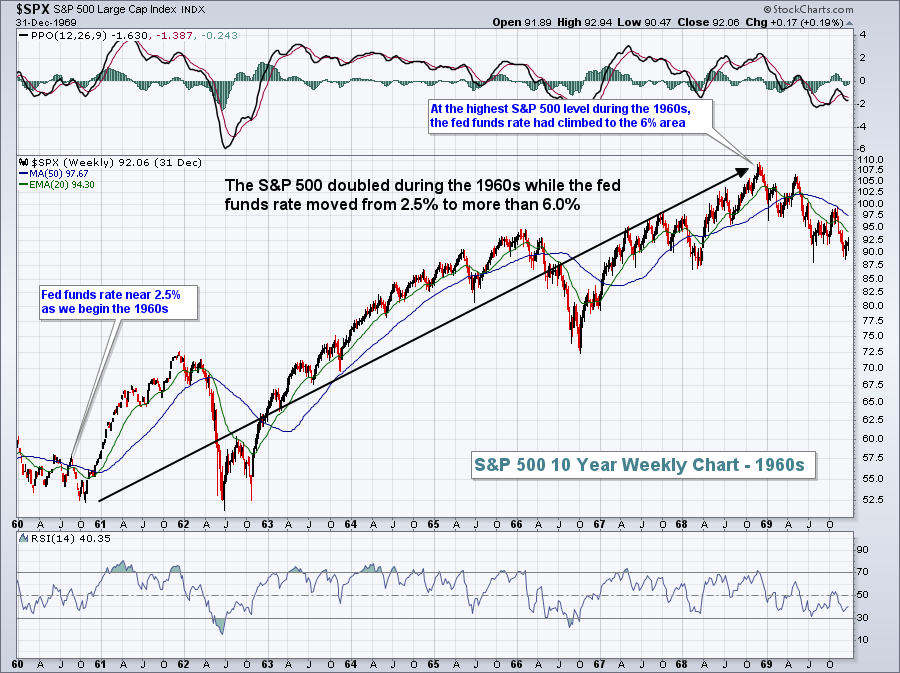 At some point, high interest rates will choke out economic growth.  But I doubt that a fed funds rate of 2.00%-2.25% will choke out our current economic growth.  And based on the Fed's 2019 forecast of 3 more rate hikes, they apparently agree.  Expect money to rotate away from defensive asset classes like treasuries and into more aggressive areas like U.S. equities.  It's exactly what we've been experiencing since 2016 and I fully expect it to continue.

The Dow Jones U.S. Toys Index ($DJUSTY) has remained in an uptrend throughout this decade-long bull market.  But, as I point out in Historical Tendencies below, Q4 isn't typically all that kind to this consumer discretionary group.  On the chart below, the uptrend is apparent and I've highlighted the Q4 performance each year with a red shaded area.  Outside of 2010 and 2014, the Q4 results have not been exciting: 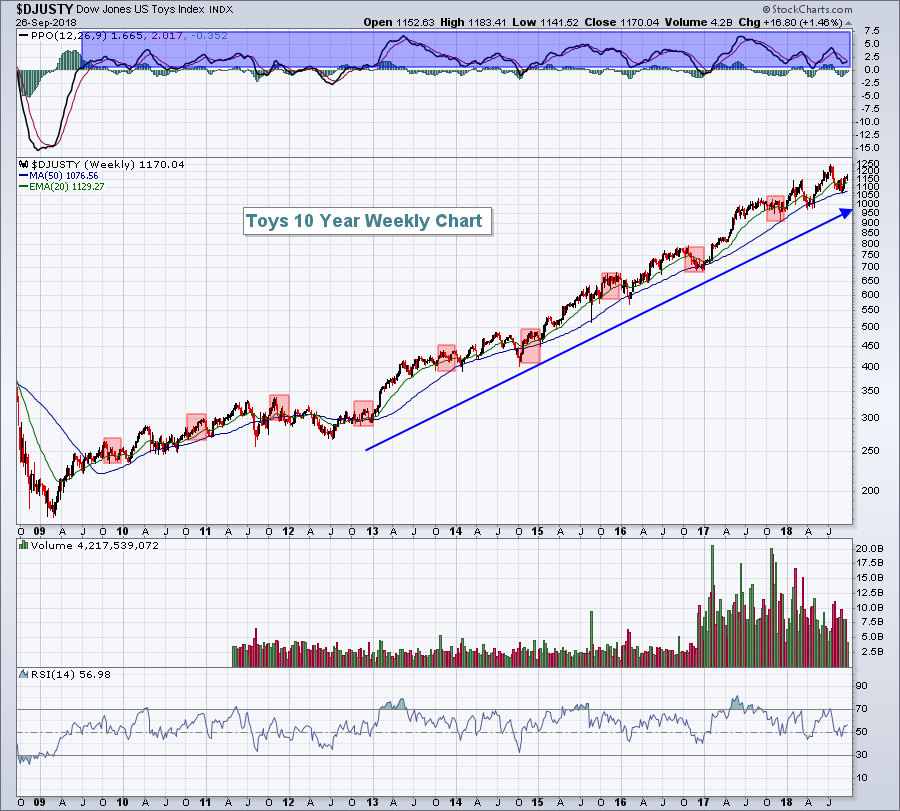 October isn't a bad month for toys, so maybe the next 4-5 weeks work out and the group challenges its recent price high, but the poor November-December time frame may hit just as we're hitting overhead resistance on the chart technically.  While I wouldn't necessarily trade off this seasonal tendency, I'd certainly be aware of it.

I've discussed the strong Q4 performers quite a bit of late, so let's consider a group that tends to struggle during Q4.  Over the past two decades, the Dow Jones U.S. Toys Index ($DJUSTY) has posted annual returns close to 13%, not too shabby.  But the DJUSTY earns only about 1.8% of those returns in Q4.  The group has actually lost money in November and December, collectively, over the past 20 years.  Fundamentally, that might come as a surprise as you might think the Christmas season would generate excitement in the group.  Historically, however, it hasn't worked out that way.  Instead, toys enjoys most of its annual return from January through May where it's averaged gaining more than 10%.