In a rare twist, communication services (XLC, +0.49%) was the only sector to gain ground yesterday.  The group has underperformed the S&P 500 badly since its July relative high with Facebook's (FB) quarterly earnings report on July 25th after the close the primary culprit.  But, at least temporarily, the sector received a boost - an oversold bounce.  Here's a 4 month chart to show just how bad it's been for the XLC: 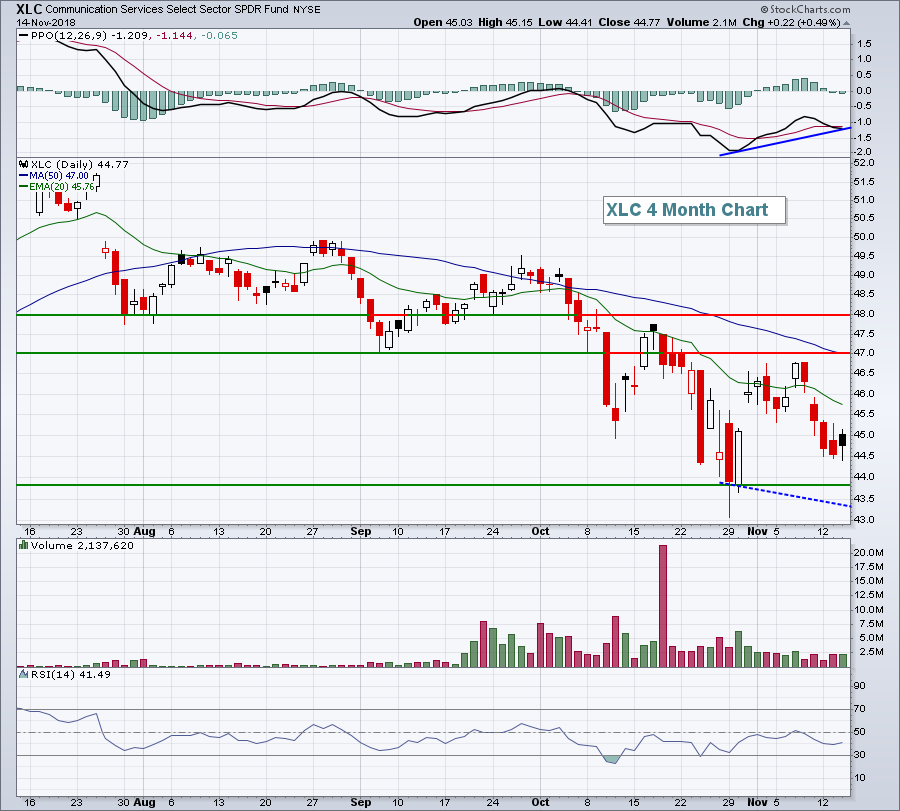 Since that gap lower in late-July, it's been mostly downhill for communication services.  There is short-term hope in the form of a possible positive divergence on the next price low.  But that's about it as I remain very cautious on the group as a whole.

There were plenty of areas of weakness to choose from.  Financials (XLF, -1.35%), technology (XLK, -1.20%) and utilities (XLU, -1.04%) were the weakest sectors.  Within the XLF, it's been a painful week thus far for property & casualty insurers ($DJUSIP).  They tested overhead price resistance on Friday of last week and since then it's been awful action: 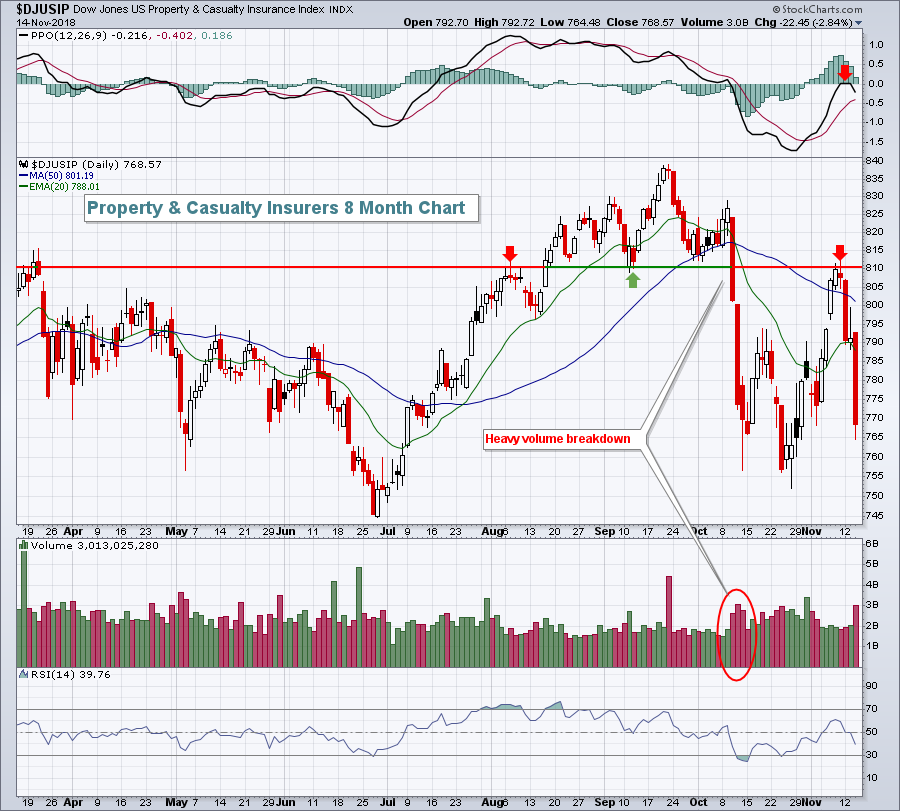 U.S. futures were higher most of the morning, so gains have slowly been slipping away.  NASDAQ futures remain slightly positive after a solid Cisco Systems (CSCO) earnings report last night, but Dow Jones futures are now flat with less than 30 minutes left to the opening bell.

Crude oil ($WTIC) has stabilized this morning and is slightly higher, but the 10 year treasury yield ($TNX) has fallen another 3 basis points to 3.09% after a slew of mostly mixed economic reports this morning.  October retail sales were quite strong, easily surpassing expectations.  It'll be interesting to see if retailers continue to perform well on a relative basis after a strong report.  If they don't, then it could be a case of good news already being priced into the stocks.

Hey, I get it.  The bears are out in full force.  It happens every few years or so during corrections.  The difference between a bear market and a correction should be your trading strategy.  Volatility ($VIX) is high and we have to respect that whether this is a bear market or not.  BUT....you'd better be prepared if this is nothing more than a correction.  Why?  Well, check out this chart of the S&P 500 throughout this bull market: 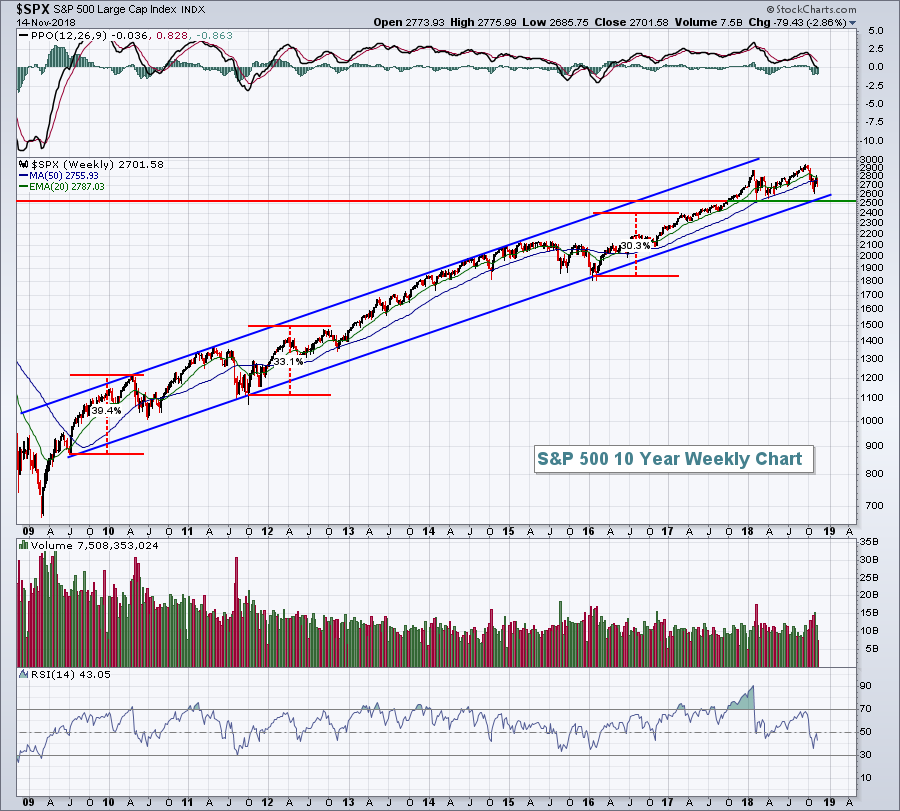 After each of the prior "corrections" to test channel support, we've seen significant gains the following year.  Everyone has to assess their own risk tolerance and determine what's right for his or her own financial situation.  But if the S&P 500 retests its February closing low of 2582 or its intraday low of 2532, simply be open to the possibility that it's a great time to buy, not sell.  I believe there's a reasonable chance that we'll test those February lows so my trading strategy currently is one of risk aversion - smaller positions, more trading of defensive areas, INTRADAY stops, etc.  I'll grow much more aggressive if the VIX moves into the upper 20s or lower 30s to accompany a test of those February lows.  The next move higher in the S&P 500 just might be a surge instead of a bounce.

Yesterday, technology (XLK) closed below its October closing low.  Volume seems to have slowed from the panicked pace in October, but the new low was made late in the session.  Today will be an important one for technology.  Will we see a reversal?  If so, the timing would be great as we now have a positive divergence on the daily chart as follows: 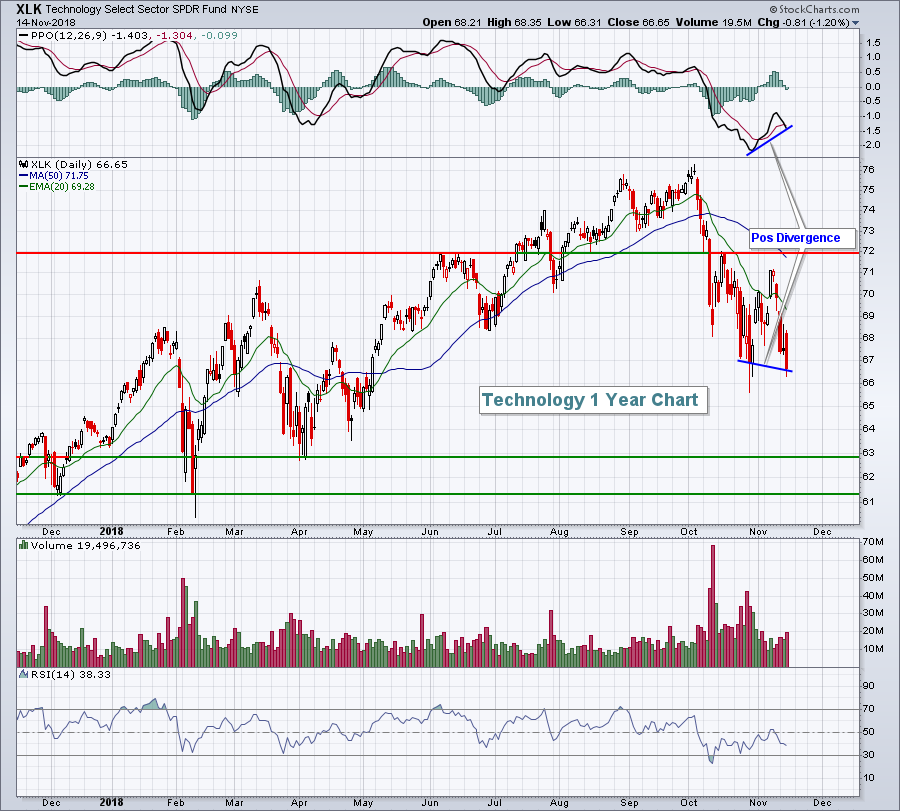 If we can't reverse, I don't see key price support until we hit the April or February lows near 63.00 and 61.40, respectively.  From an intraday perspective, the bulls can still point to the late October intraday low at 65.59.

Next Thursday is the Thanksgiving Day holiday here in the U.S.  Over the past six years, the NASDAQ has gained ground 22 trading sessions and lost ground just 2 during Thanksgiving week.  The annualized return for these days has been +113.40% over this period.