Join me and John Hopkins, President of EarningsBeats.com, after the bell today for a 4:30pm EST webinar.  I'll be discussing the stocks that I believe represent the best trading opportunities of Q4.  These stocks all posted better-than-expected quarterly revenues and EPS and significant accumulation appears to be taking place.  For more information, you can CLICK HERE.

We closed out the week with mostly gains across our major indices.  The NASDAQ was a notable exception, losing 11 points, as communication services (XLC, -0.49%), consumer discretionary (XLY, -0.39%) and technology (XLK, -0.16%) all posted losses.  There was a clear return to safety as utilities (XLU, +1.54%) and real estate (XLRE, +1.42%) easily led on a relative basis.  The latter threatened a very significant breakout as well: 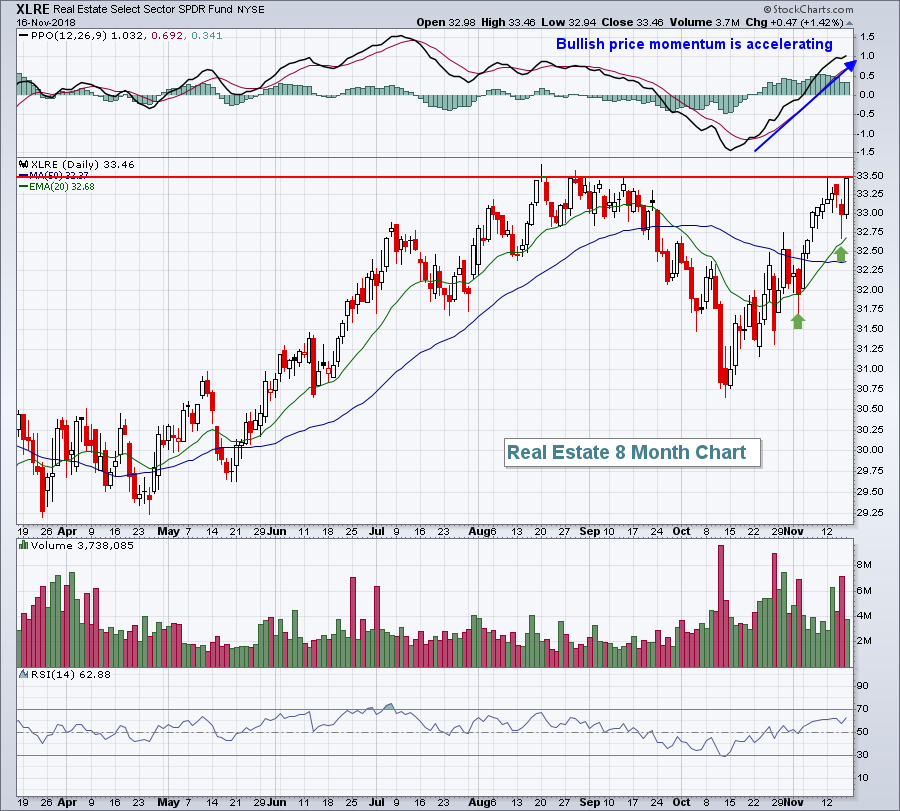 Recent pullbacks have held rising 20 day EMA support and the daily PPO is quite strong.  The XLRE is one of the best sectors currently, perhaps second to consumer staples (XLP, +0.25%).  It's not at all unusual to see money rotate to defensive sectors when the overall market corrects.

While consumer discretionary was amongst the weakest groups on Friday, one of its industry groups - home construction ($DJUSHB, +3.05%) - was a leader.  I take a longer-term look at the DJUSHB in the Sector/Industry Watch section below to see if the group is worth considering for a longer-term move to the upside.

Crude oil prices ($WTIC) are down slightly this morning as their rally attempt has thus far been a rather feeble one.  Gold ($GOLD) is relatively flat this morning amid continuing short-term dollar ($USD) weakness.

Asian markets were higher overnight and European markets are attempting to move higher as well, although the German DAX ($DAX) is barely positive.

U.S. futures were up earlier, but have turned negative in the past couple hours.  Dow Jones futures are lower by 84 points with 30 minutes left to the opening bell.

We are entering a period of the year when small stocks tend to outperform.  In addition, the weakness the past couple months now has the Russell 2000 hovering just above what I view as very important short- to intermediate-term price support: 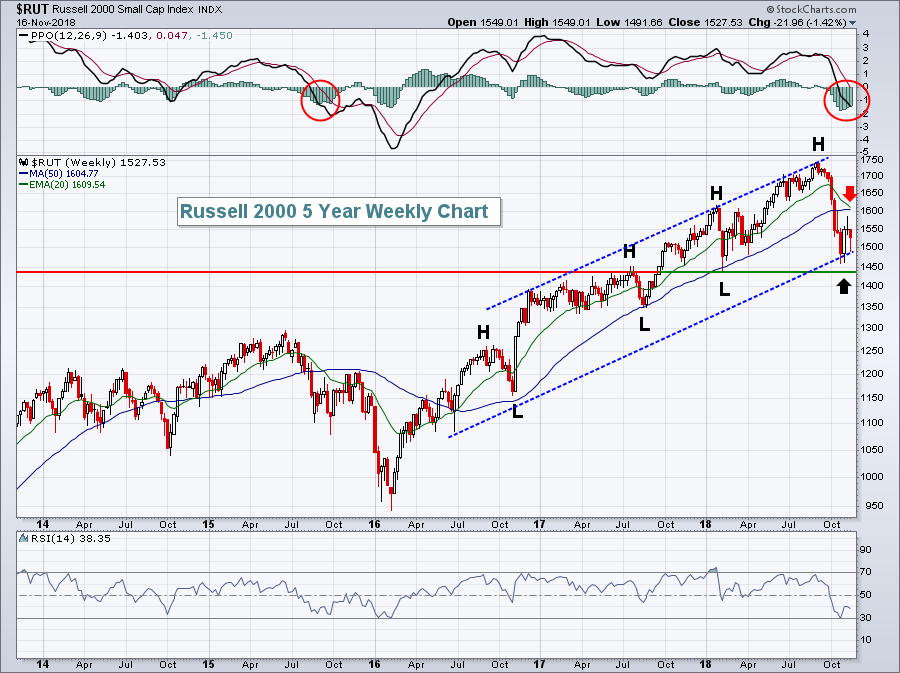 Key weekly highs (H) and lows (L) are marked on the above chart.  An uptrend, in its simplest form, is nothing more than a series of higher highs and higher lows.  Consolidation, or basing periods, can results in equal highs and equal lows.  Rarely, however, does anything bullish come from establishing lower highs and lower lows, with perhaps bull wedges being an exception.  I don't see a bull wedge forming on the above chart though.  I've connected highs and lows to establish an up channel.  A violation of 1440-1450 support would be a bearish development in my view.  Until then, however, we could be sideways consolidating in bullish fashion.  We cannot ignore the weekly PPO that's now turned negative as negative PPOs are required in a bear market.  But nothing is more important to the integrity of a chart than price support.  Watch 1440-1450 very closely.

Home construction ($DJUSHB) has been out of favor in 2018, that much is quite clear.  But is it at a potential long-term turning point?  Quite possibly.  Check out the support level that the group is now testing: 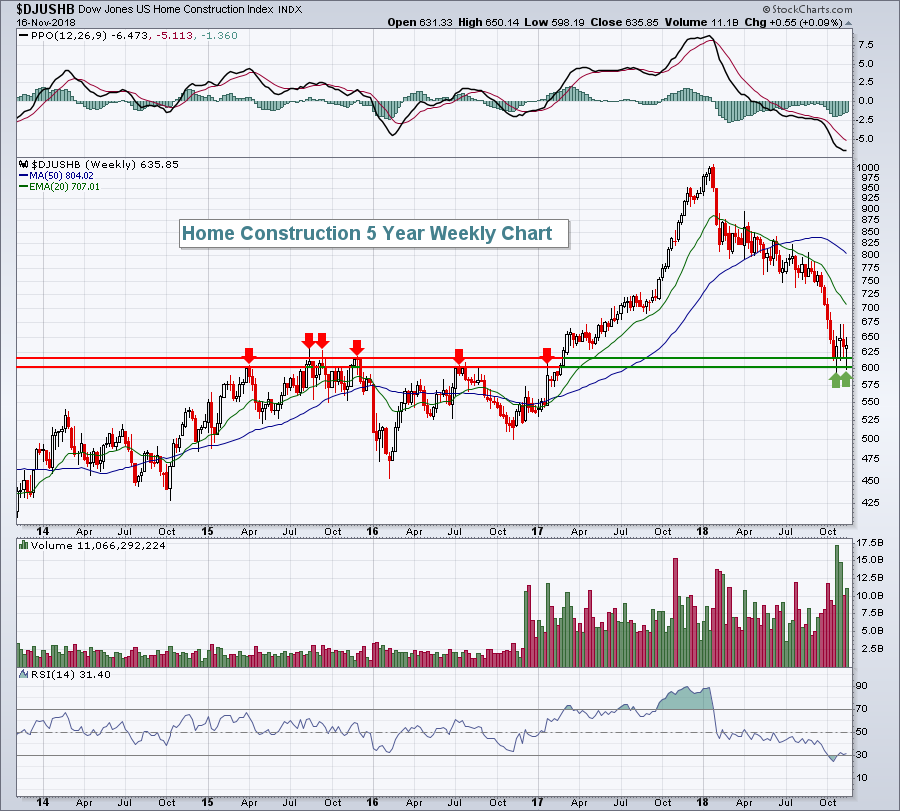 It was a rapid advance in 2017, but the downside move has been just as impressive.  Fortunately for the bulls, there seems to be plenty of buyers close to 600, as evidenced by those huge volume bars the past 3-4 weeks.  I think the group has found a bottom.

Last week's featured setup was GOGO, Inc. (GOGO), which was a great setup and a horrible setup all in one.  GOGO was featured as it was testing both gap and 20 day EMA support.  It had closed at 6.18 and, at its high last week traded at 6.80 - a 10% winner in just a few days.  That's a great return in a short period of time.  However, after the close on Thursday, GOGO announced a $215 million convertible senior note offering and GOGO was slammed on Friday to the tune of 23.9%.  While the offering may help GOGO in the long-term, it was viewed strictly as dilutive in the near-term and traders bailed.

Let's hope that this week's setup holds up better.

For this week, I'm going with Fitbit (FIT).  FIT opened November with a bang, gapping higher on much-better-than-expected quarterly earnings and then continuing its ascent, all on spectacular volume of nearly 50 million shares.  Since that time, FIT has worked its way back down to test the top of gap support.  I'd look for buyers to step in here: 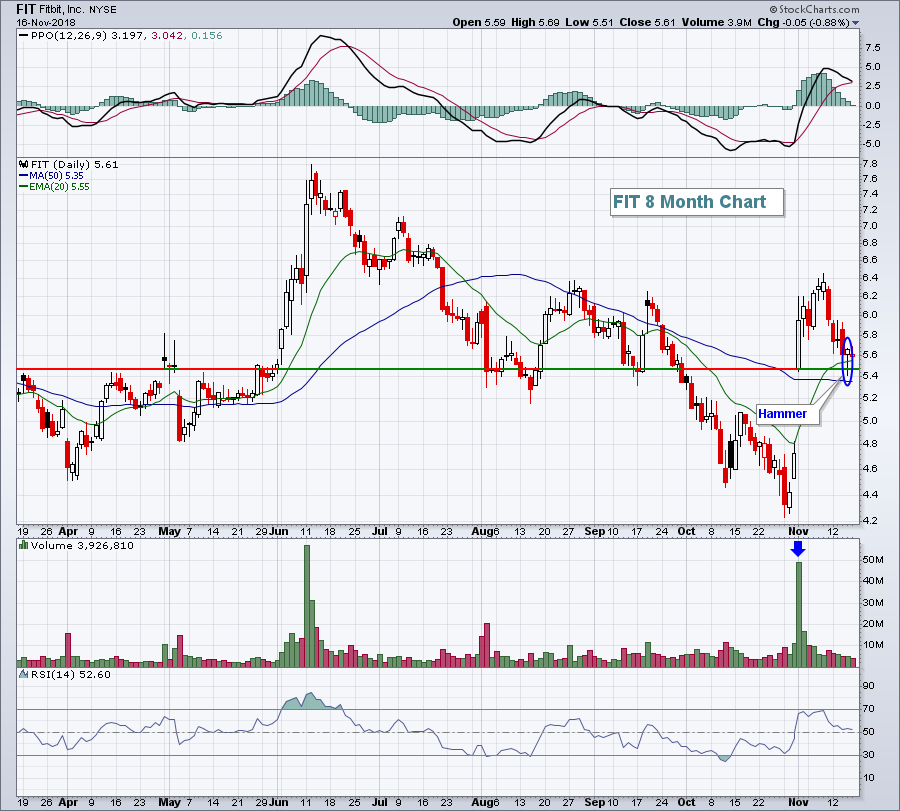 5.48 represents closing support and any intraday move beneath 5.40 would be worrisome.  Otherwise, my target would be in the 6.25-6.35 range.

November housing market index to be released at 10:00am EST:  68 (estimate)