It was another strong day on Wall Street.  All 11 sectors moved higher for the second time this week.  Industrials (XLI, +0.88%) represent the only sector to have posted a daily loss this week.  The other 10 sectors have shown gains all three days.  Wide participation to the upside is a strong indication of renewed market strength and is a primary characteristic of bull markets.  The Dow Jones (+0.58%) actually participated to the extent of the other major indices as Boeing (BA, +0.46%) finally showed a bit of strength, rising off of intraday losses.  The S&P 500 and NASDAQ each rose 0.69%, while the small cap Russell 2000 index lagged a bit, climbing just 0.39% on the session. 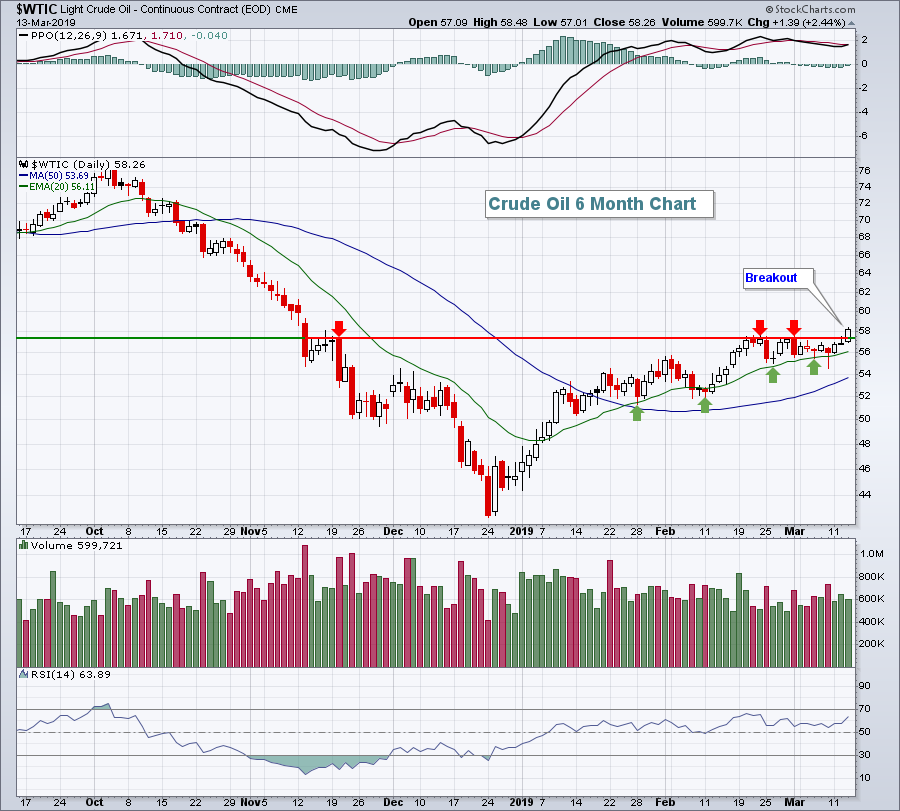 One consumer discretionary (XLY, +0.35%) industry group, specialty retailers ($DJUSRS, +0.82%) is on the verge of a major breakout and should be monitored closely as a breakout would mean you want to have representation in your portfolio.  There is a negative divergence, however, so there are short-term risks involved as well: 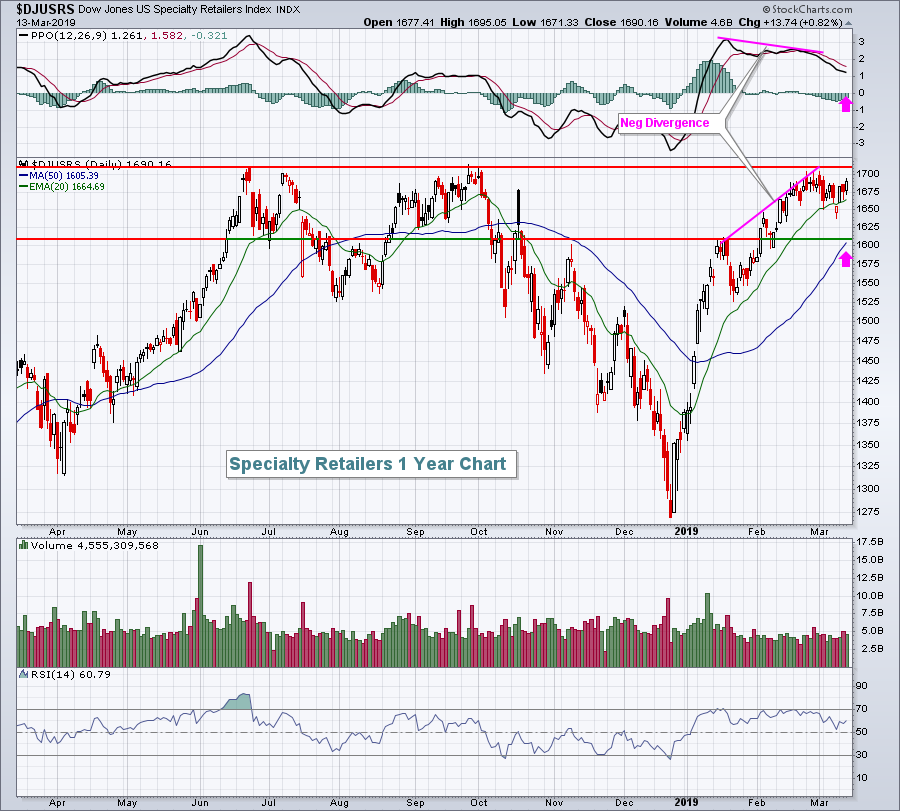 On a breakout, volume could be the key.  If the DJUSRS clears 1710 on a closing basis, we want to see volume confirm the move given the apparent slowing price momentum.  The pink arrows mark a possible PPO centerline and 50 day SMA reset.  If the DJUSRS does struggle over the next week or two, the 1600 area would mark excellent support.

Utilities (XLU, +0.10%) was the chief laggard among sectors on Wednesday, but the group overall has performed extremely well given the weakness we've seen in the 10 year treasury yield ($TNX), which continues to hover just above the 2.60% level.

General Electric (GE) is showing much more bullish characteristics as the stock is up slightly this morning despite another ugly warning about its 2019 prospects.  Still, U.S. futures are hanging near the flat line as key overhead price resistance looms.

Crude oil ($WTIC) continues its march higher, this morning trading at $58.49 per barrel.  Energy (XLE) has traded higher each of the past three sessions after nearly testing its rising 50 day SMA, and today's crude price rise will likely add to strength in the group.

The S&P 500 still must negotiate the overhead price resistance level established from all the "reaction" highs in October, November, December, February and now March.  By my count, we've been above 2800 on 11 different occasions without one single close above 2820.  That firmly establishes overhead resistance in that 2800-2820 range.  Short-term support is marked by the rising 20 hour EMA and Tuesday's low, which are currently at 2796 and 2787, respectively.  I give the edge to the bulls as we're in an undisputable uptrend off the December low and consolidating just beneath key resistance.  It also should be noted that the Volatility Index ($VIX) closed at 13.41, its lowest close since October 3rd.  We did not have a single VIX reading below 16 during either of the two prior bear markets.  If you're clinging to the bear market theory, current stock market fear levels do not support that theory. 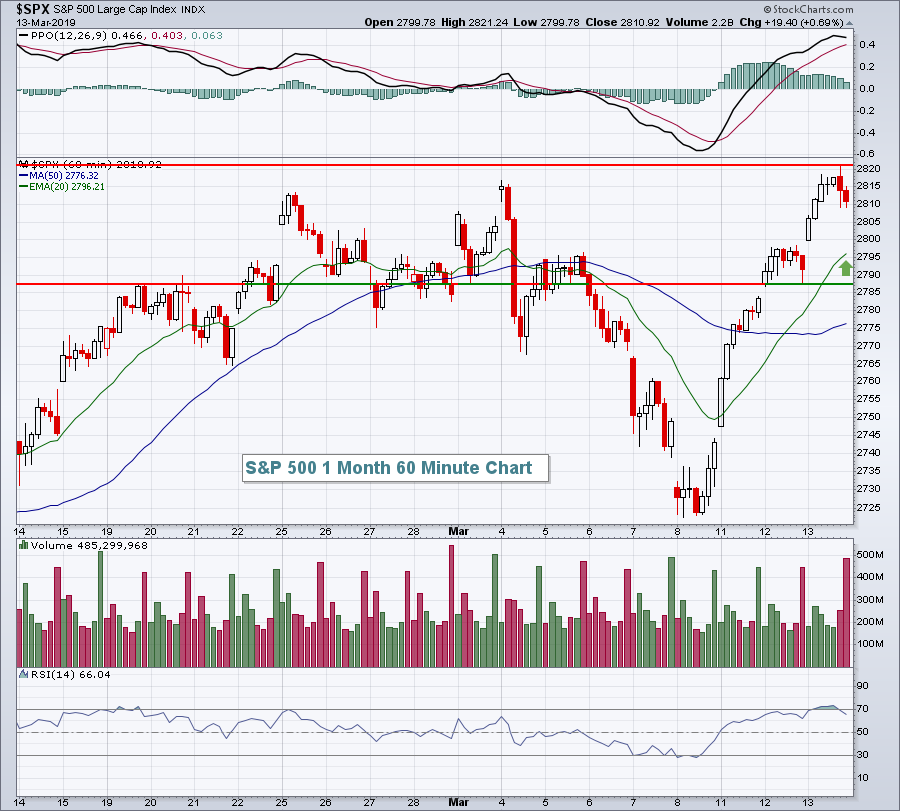 Should the two support levels mentioned above fail, then I'd look to the rising 20 day EMA, which is currently at 2768.  We found prior price support there on February 21st and March 4th, so there's buying history at that price level.

Business support services ($DJUSIV, +0.22%) ended Wednesday's session higher, but like the S&P 500, failed on its breakout attempt with a weakening PPO in play.  That could spell caution near-term, so be careful with this group until the actual breakout is made: 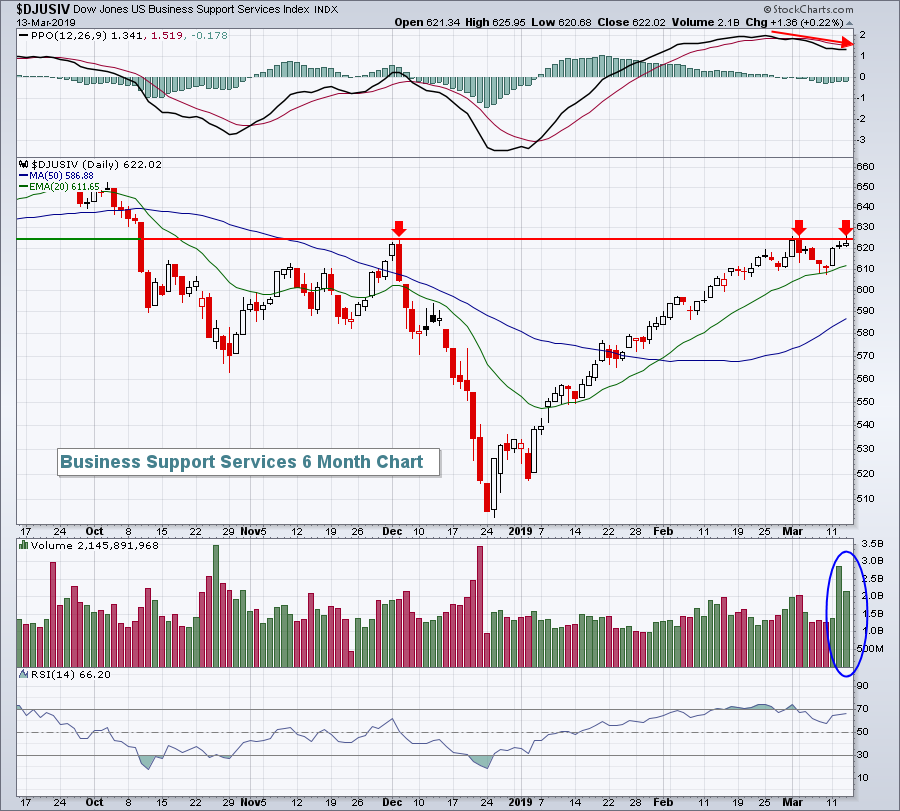 There isn't a negative divergence in play because, by definition, we have to see a higher close accompany a lower PPO and that didn't happen, but the falling PPO is enough to at least flash a warning signal.  Stocks within this group, such as Verisk Analytics (VRSK, +0.39%), could be at risk: 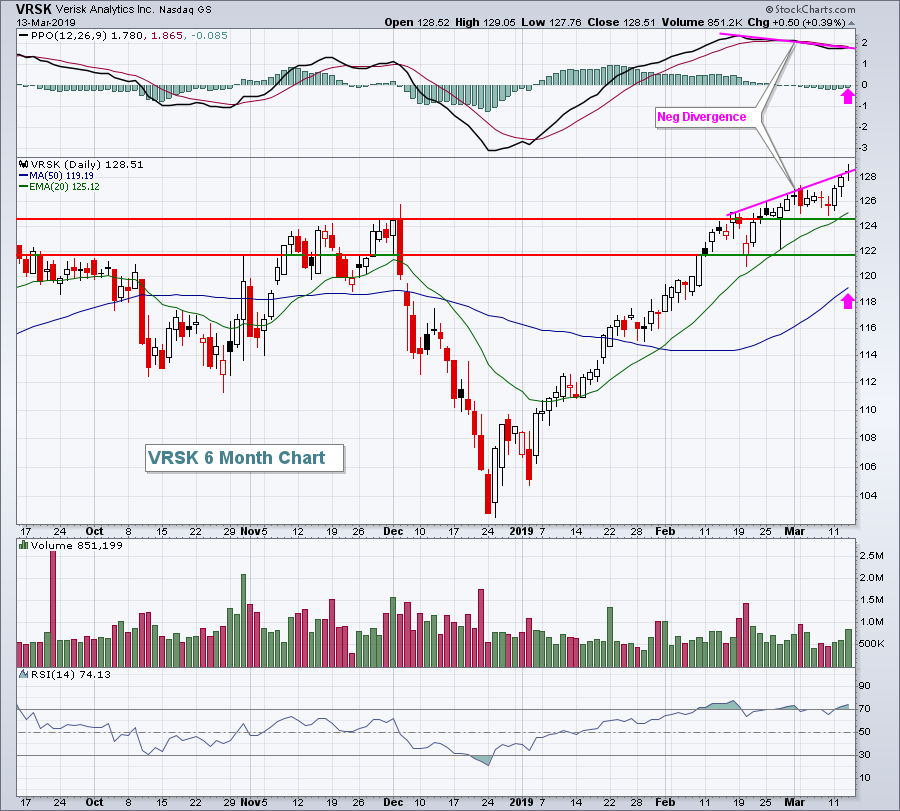 Negative divergences do not guarantee us future weakness, but there are enough warning signs here for me to be cautious.  VRSK is clearly overbought with an RSI reading of 74 and, until yesterday, was breaking out with lesser volume.  Yesterday's volume increased, but a potential reversing candle (doji) printed.  Again, I'd be cautious.  VRSK is a nice stock, but it may face short-term technical headwinds.

Ulta Beauty, Inc. (ULTA, +1.29%) is on the cusp of a major breakout as it gets set to report its earnings later today.  It's worth noting that ULTA loves the month of March historically: 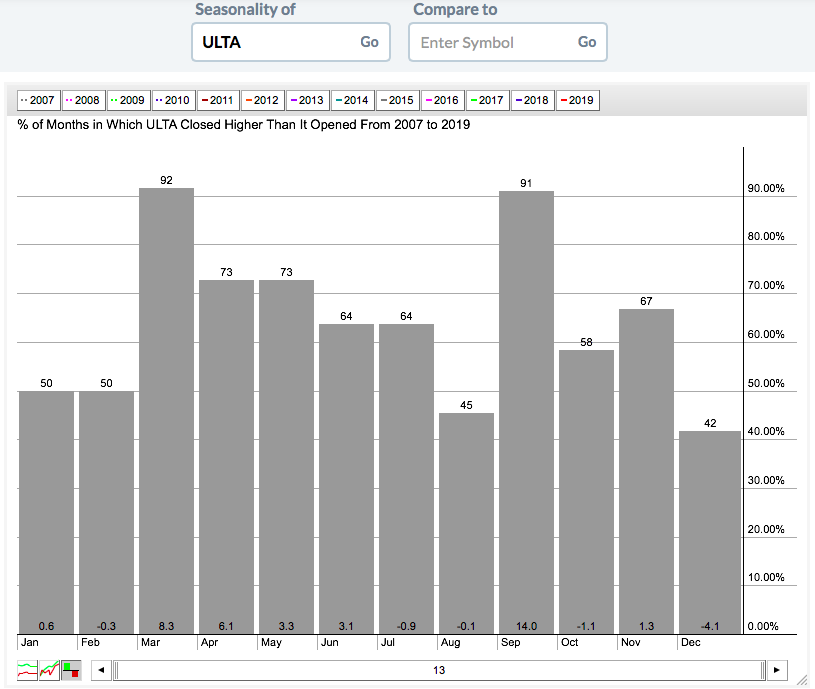 It's been higher 12 of 13 March's and has produced average monthly returns of 8.3% during the month.  A big earnings report could launch ULTA for both technical and seasonal reasons.