The U.S. stock market finished the day in bifurcated fashion as the NASDAQ (+0.12%) clung to a relatively minor gain, while the aggressive small cap Russell 2000 index lost 0.57%.  The Dow Jones and S&P 500 barely finished in negative territory, dropping 0.10% and 0.01%, respectively.  Four of our eleven sectors finished above the flat line as healthcare (XLV, +0.79%) and consumer discretionary (XLY, +0.50%) were clear relative winners.  Still, I'd say Tuesday was a very good day for the bears as solid early gains were mostly wiped out by the close.  A reversal day with negative divergences just about everywhere makes me very cautious in the near-term.  Of course, many hopes will be pinned on a dovish Fed, so let's see how the market reacts (and closes) today after the Fed announcement.

Semiconductors ($DJUSSC, +1.21%) continued their torrid pace of late, surging to a level not seen since October 2018: 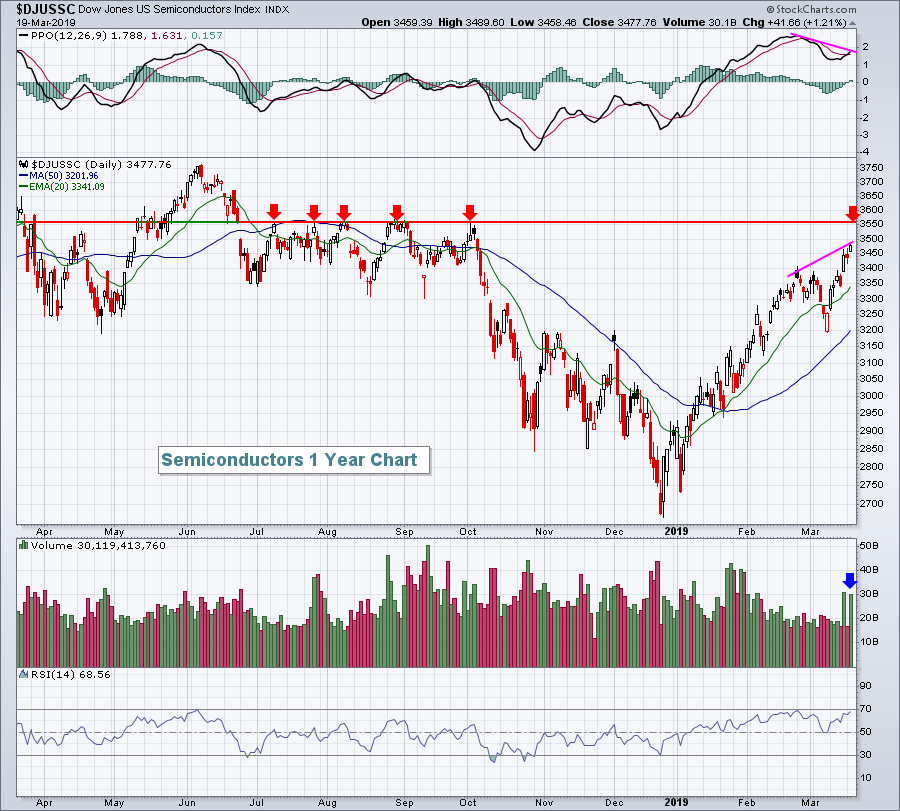 The group appears headed for a major test of price and gap resistance near the 3560 level.  While the negative divergence is a concern, check out the heavy volume that accompanied yesterday's price move.  It's very difficult to argue slowing momentum when you're seeing heavy volume buying.  One huge reason for the buying pressure in semiconductors was a major breakout in Advanced Micro Devices (AMD, +11.83%).  AMD had been lagging its peers for awhile, but that ended yesterday with an exclamation point: 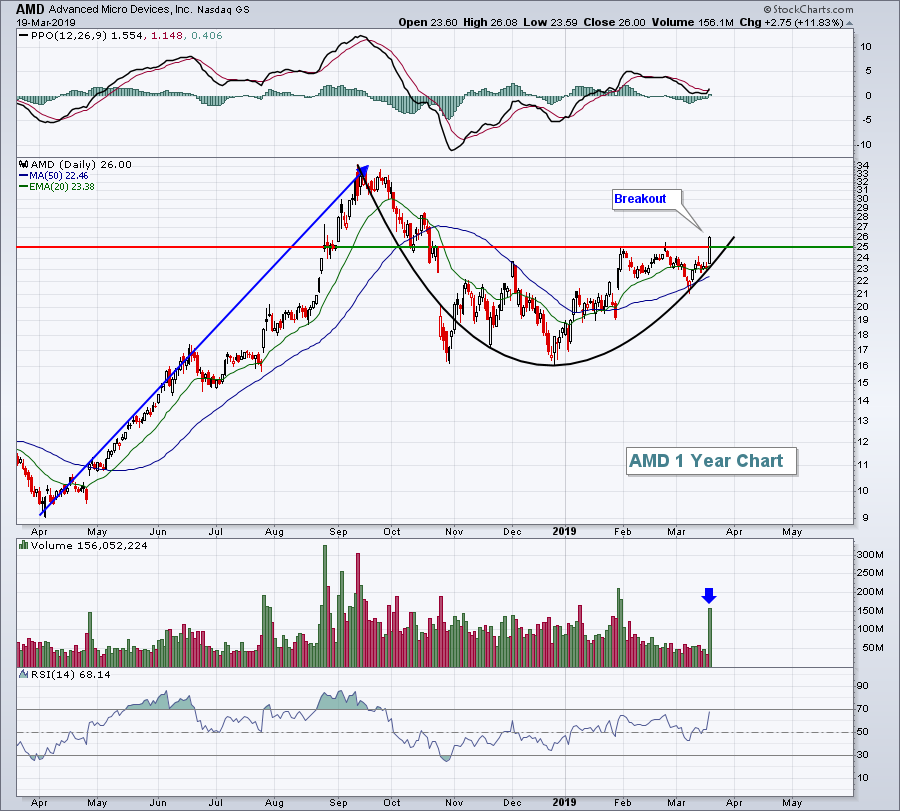 After a lengthy uptrend, AMD now appears to be consolidating in very bullish fashion - perhaps yesterday's breakout will extend its rally to form the right side of a cup (black parabola).  The huge spike in volume supports the notion of higher prices here.

U.S. futures were lower overnight after FedEx (FDX) disappointed traders with its quarterly results and lowered future guidance.  But the stock market has found renewed resilience during its current rally and that is on full display this morning as futures have turned slightly positive.  Asian and European markets are mixed.

The 10 year treasury yield ($TNX) has again dipped below 2.60% as the bond market points to a much weaker growth outlook.  Thus far, the stock market doesn't seem to be listening, instead continuing to focus on a more dovish Fed the past 2-3 months.

FDX is down more than 6% in pre-market action.

The U.S. Dollar Index ($USD) has been rising since the September low, printing higher highs and higher lows.  Thus far, the USD is holding onto trendline support that connects intermediate-term lows.  While the dollar has been gaining since September, both materials (XLB) and energy (XLE) have been underperforming the S&P 500, which is what I'd expect: 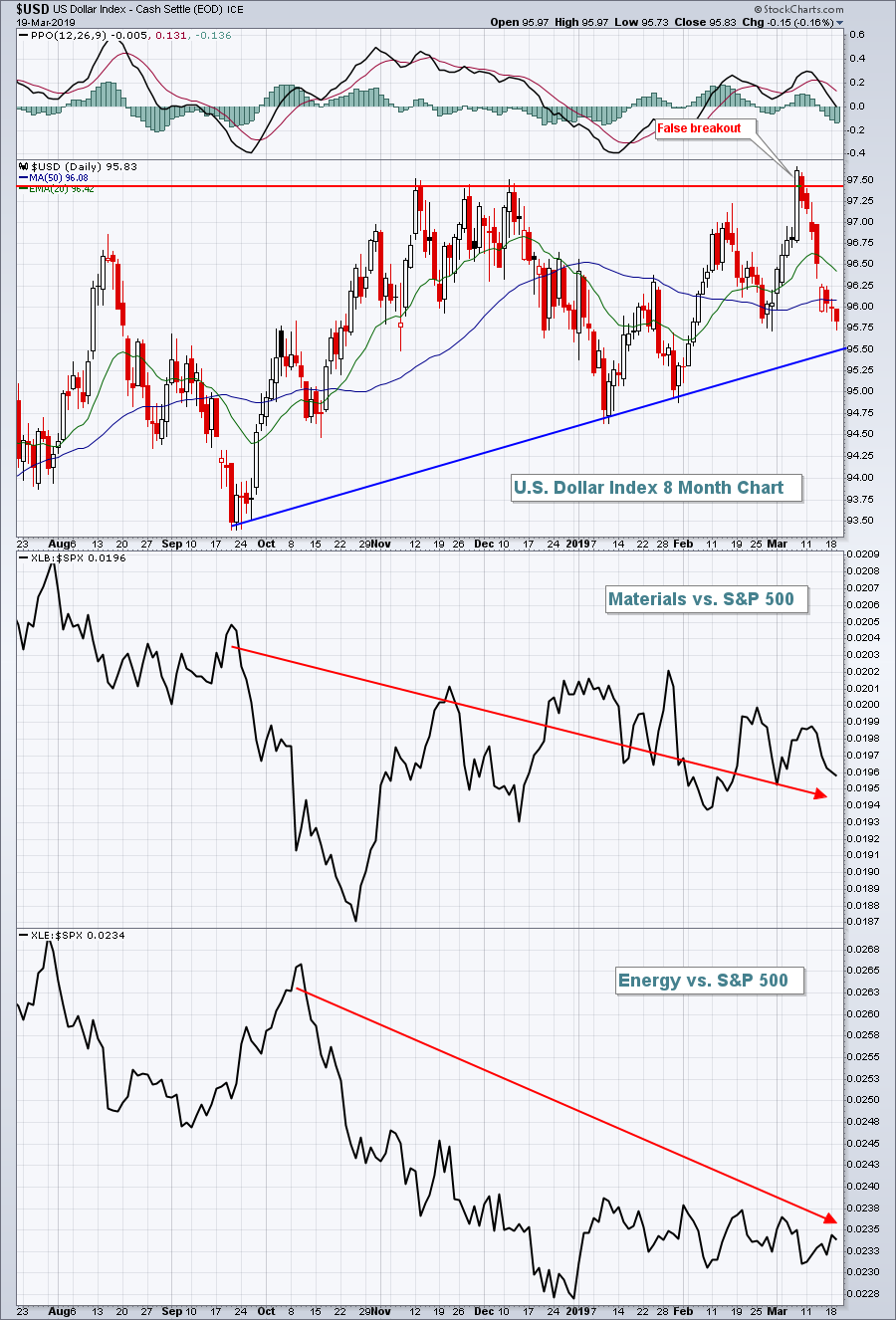 It's surprising to me to see the XLB:$SPX price relative dropping over these past eight trading sessions while the USD has fallen all eight days and nearly 2% over that stretch.  The XLE:$SPX has been a bit stronger, but I'd look for both of these price relatives to turn up in a big way if the USD breaks trendline support.  The Fed's action/policy statement later today could have a significant impact on the bond and stock markets, along with the USD.  Keep an eye on the USD's reaction to the Fed as it could give short-term signals as to the relative strength of materials and energy.

Footwear ($DJUSFT) has gained more than 26% over the past three months, but it's one more example of an industry group that looks tired.  Check out the following daily chart: 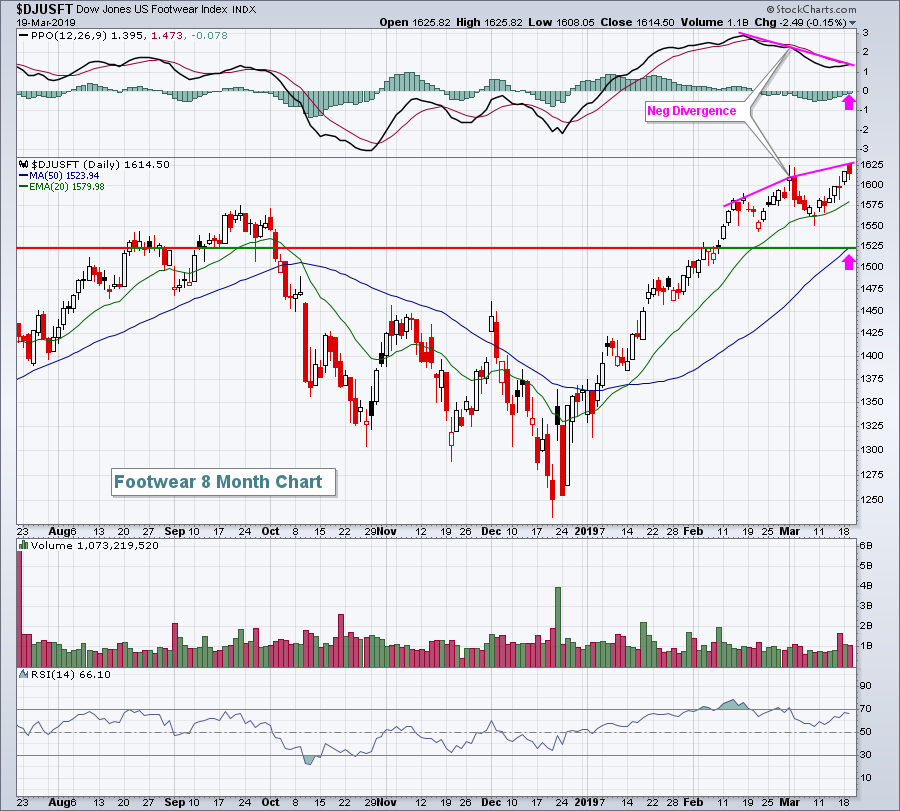 The DJUSFT's last two highs have been accompanied by lower PPO readings, definitely a sign of slowing price momentum.  Tuesday's action saw a reversal after an early morning gap higher.  We've got the Fed on deck today so if anything negative comes out of their meeting, just be aware that the stock market is quite vulnerable to downside action.

FOMC policy statement to be released at 2:00pm EST