Yesterday was all about the Fed and what it might say.  It was essentially a foregone conclusion that there'd be no rate hike, so traders were on edge anticipating what might change in the Fed's policy statement.  Stock traders seem to have a love affair with the notion of cheap money.  The Fed has definitely become much more dovish since its infamous declaration of multiple rate hikes in 2019.  It has now moved to ZERO rate hikes in 2019 and perhaps one in 2020.  Stock traders initially rejoiced the news, holding S&P 500 support at 2817 and sending the benchmark back up to its high of the day, well into positive territory with just an hour left in the trading day.

Then reality set in.

Slower growth means lower corporate profits, it's really as simple as that.  It's what the bond market continues to forecast and that market placed its bet once again at 2pm EST when the Fed spoke: 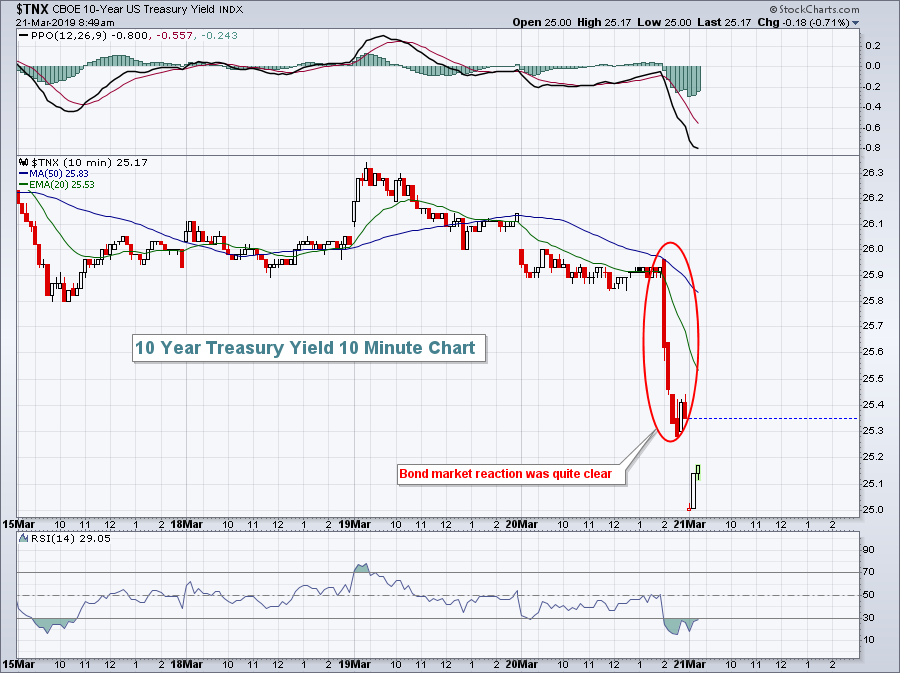 We lost the January yield support low at 2.55% at yesterday's close.  The bond market has been directing the Fed off its "strengthening economic picture" platform for the past few months and the Fed is beginning to listen.  The stock market, however, continues to ignore it.  Now that fears of recession have subsided, the S&P 500 has essentially regained what it lost in Q4.  From here, it might be likely that stock traders will stall and wait for clearer economic signs of strength before committing more capital.  That makes sense to me.

FedEx (FDX, -3.49%) rallied off its intraday low, but its quarterly report should be a bit of a warning about economic growth as well.  FDX missed its quarterly revenue and EPS estimates, then lowered guidance for 2019.  Delivery services ($DJUSAF, -2.59%) took a direct hit as a result, while industrials (XLI, -0.69%) also suffered consequences.  But the clear loser on Wednesday afternoon was the financial sector (XLF, -2.06%).  Banks ($DJUSBK, -2.78%) and life insurance ($DJUSIL, -2.77%), two groups with profitability tied to the direction of the 10 year treasury yield ($TNX) and yield spread ($UST10Y-$UST2Y), saw considerable selling.

There are a few big items this morning.  First, the 10 year treasury yield ($TNX) continues to fall, dropping another 2 basis points to 2.51% this morning.  Biogen (BIIB) is down more than 26% after its announcement that it would be scrapping an Alzheimer drug with huge potential.  Finally, Micron Technology (MU) is up roughly 3.5% after reporting its latest quarterly results after the bell on Wednesday.

U.S. futures are taking a hit this morning, with Dow Jones futures down 84 points with 30 minutes left to the opening bell.

While I've discussed negative divergences this week that certainly concern me in the short-term, I'm not nearly as concerned in the longer-term.  The Volatility Index ($VIX) dropping back into the 12s recently is a signal that fear has dissipated to the point where it's quite unlikely we're in a bear market - even if you considered the Q4 market drop to be a cyclical bear market - which I do.  Technically, the bear market doesn't end until the S&P 500 is able to clear prior tops and move into all-time high territory.  But I would not trade by bear market rules.  The divergences indicate the possibility of short-term selling or consolidation, but I'd now watch the rising 20 week EMAs for excellent longer-term support on the benchmark S&P 500: 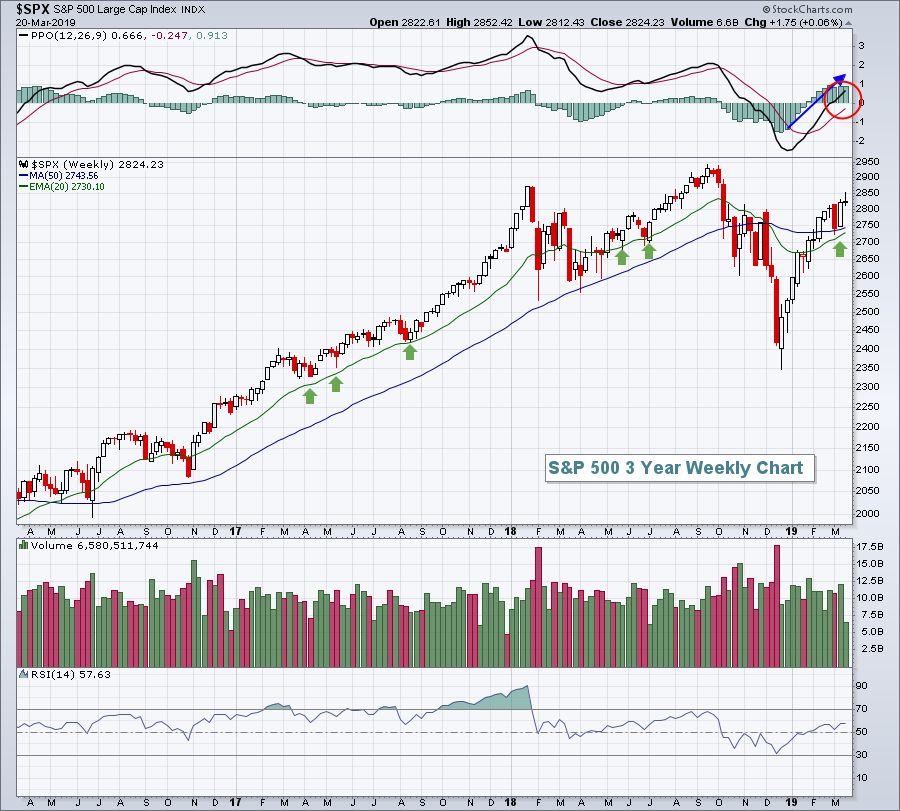 It's also worth noting that during the two prior bear markets, 2000-2002 and 2007-2009, the weekly PPO never crossed the centerline.  Bear market rallies do not typically last long enough to see the weekly PPO make that bullish crossover.  Nonetheless, the bond market action should provide all of us reason for concern.

The financial sector (XLF, -2.06%) was the obvious laggard on Wednesday, tumbling after the Fed's policy statement was released at 2pm EST.  The bond market's interpretation of the statement was that growth is likely to slow in 2019 and 2020 and, as a result, money poured into treasuries sending the 10 year treasury yield ($TNX) down to 2.53%, its lowest level since the start of 2018.  While the selling began on the XLF at price highs established in November and December 2018, there's still hope on the weekly chart for a rebound: 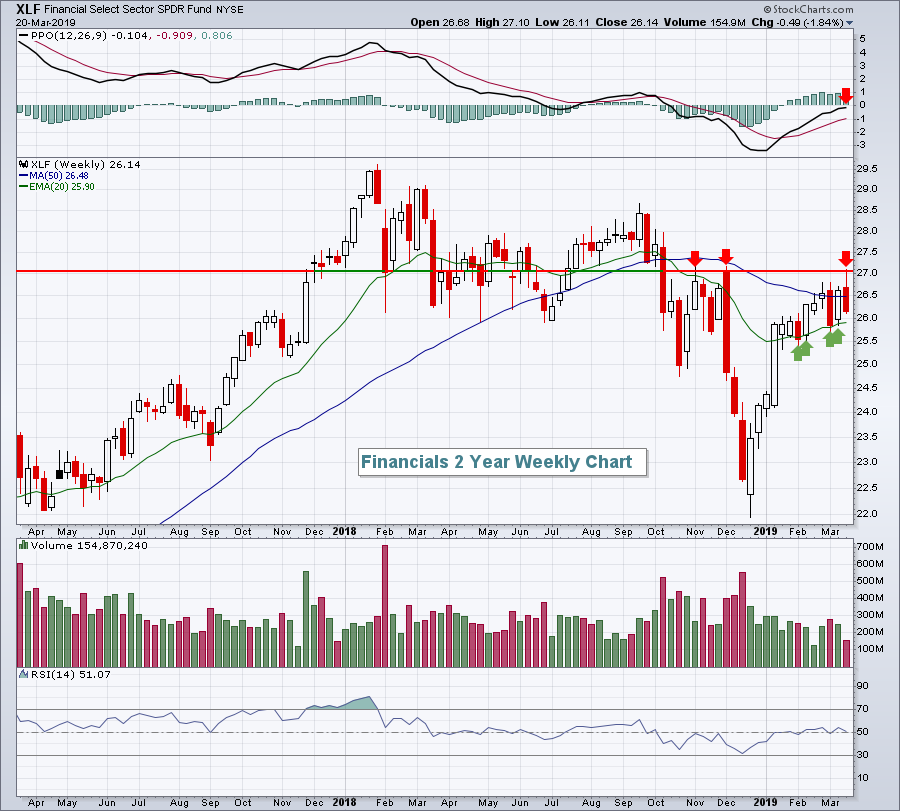 The bearish argument, of course, is that selling kicked in just where it did previously and that the weekly PPO is rolling over at centerline resistance.  From a bullish perspective, the green arrows mark several successful tests of the rising 20 week EMA.  Which level gives way first?  That's what I'll be watching.  The breakdown in the TNX won't help the bulls, however.