Who thought at our December low that the S&P 500 would rally well over 20% to above 2900 and within 1% of our all-time high in less than four months?  Not this guy.  The stock market can do anything, but if this is a bear market rally, it's unlike any we've ever seen.  Friday was the latest celebration of this Wall Street party as the Dow Jones rallied over 1% to lead our major indices higher once again.  The S&P 500 gained 0.66%, while the more aggressive NASDAQ and Russell 2000 lagged on a relative basis, climbing 0.46% and 0.36%, respectively.

Leadership in the S&P 500 came in the form of Anadarko Petroleum (APC, +32.15%), an announced acquisition target of Chevron (CVX) for $65 per share in stock and cash.  That provided a boost for energy (XLE, +0.27%), but the real catalyst on Friday were banks ($DJUSBK, +2.36%) after several big banks exceeded earnings expectations.  Despite a weak treasury yield environment, JP MorganChase (JPM, +4.69%) posted quarterly EPS of 2.65, easily surpassing the consensus estimate of 2.32.  PNC Financial (PNC, +3.09%) also beat expectations.  Both of these influential banks closed at 2019 highs on Friday.  Wells Fargo (WFC, -2.62%) was the exception as it lowered its 2019 forecast.

Let's be clear.  The banking environment is still not great.  The yield curve has put pressure on net interest margins at banks and that must change for this group to become a market leader.  And there's significant overhead price resistance to boot: 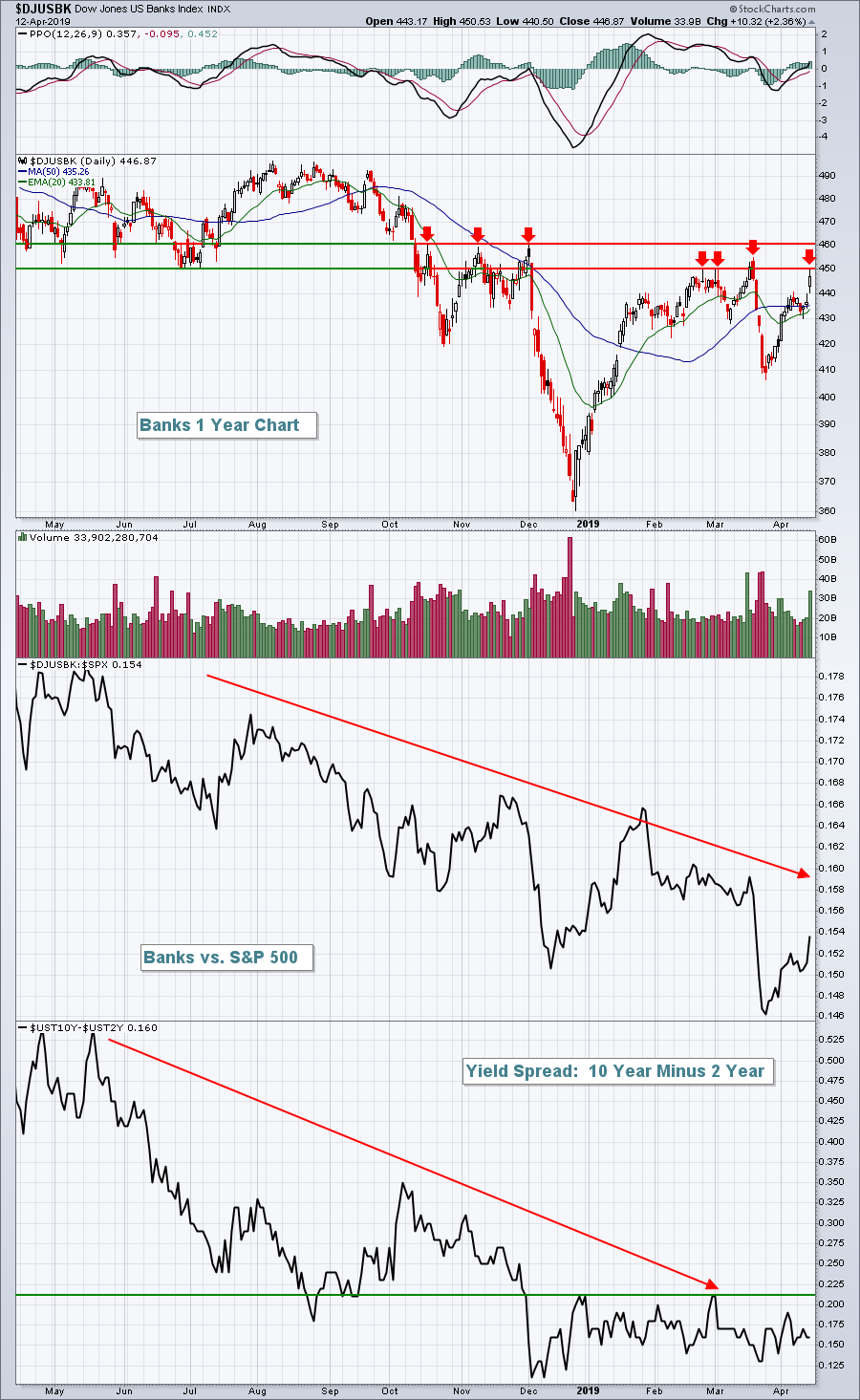 The relative strength is improving, but there's much work left to do.

Walt Disney's (DIS, +11.59%) announcement of their Disney+ service to compete with Netflix (NFLX, -4.49%) lifted the former's stock to an all-time high and the broadcasting & entertainment group ($DJUSBC, +4.04%) soared as a result.  More on that chart below in the Sector/Industry Watch section.

We're moving more deeply into earnings season this week and next so reactions to these reports will be very important.  Much could depend on what the Fed does.  A dovish policy would obviously be seen as much more bullish for U.S. equities.  This morning, the 10 year treasury yield ($TNX) is only up 1 basis point, but it is at 2.57%, clearing overhead yield resistance.  Still, we're well below the 3.25% that we saw back in October and November.

U.S. futures are slightly lower as we begin a new trading week.

The Dow Jones benefited mightily from bank earnings and the Walt Disney (DIS) announcement on Friday, moving within just 1-2% of its all-time high.  It closed 12 points beneath its 2019 high close, but momentum remains quite strong: 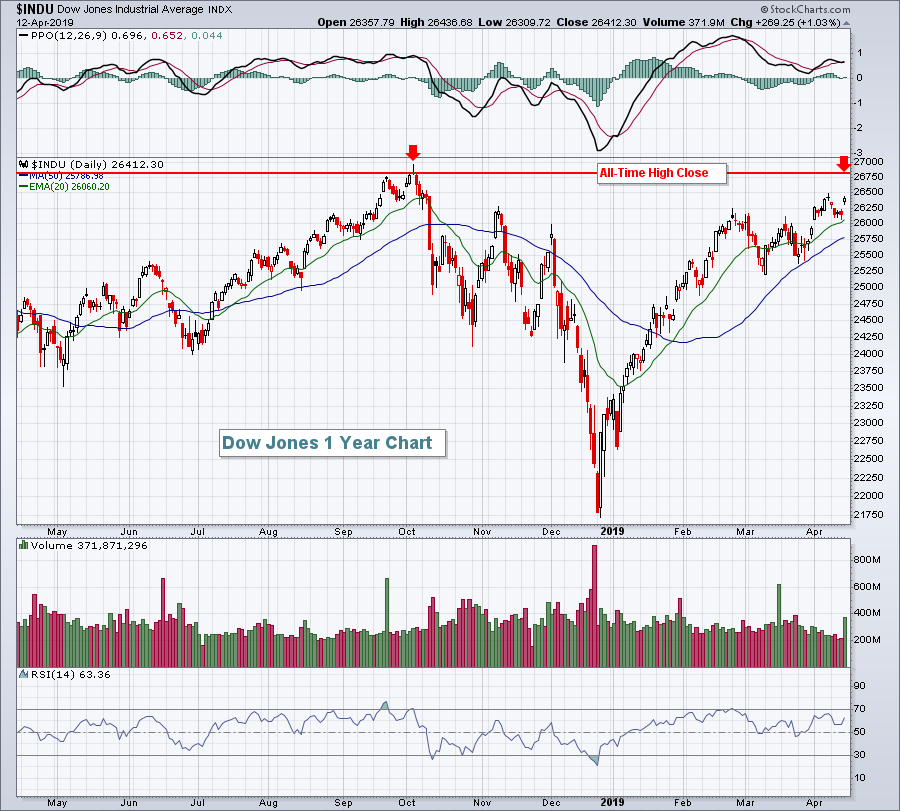 Those December lows seem like forever ago as we now wait to see if earnings season justifies a breakout to new all-time highs. 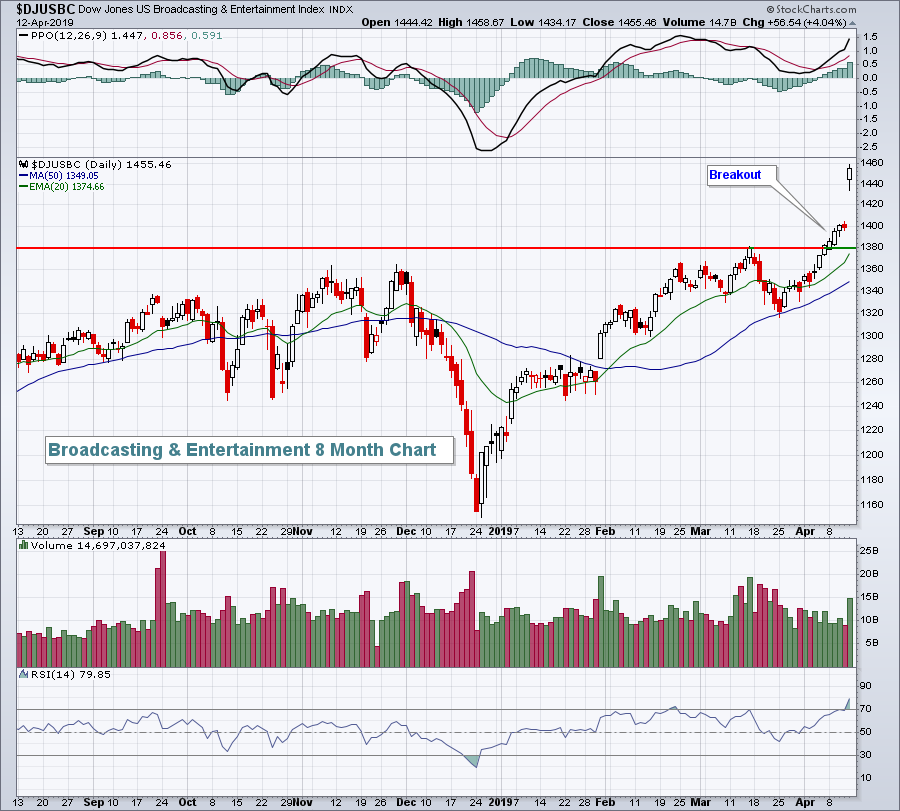 This industry is now one that I'd watch very closely for pullbacks as I expect to see further relative strength in Q2.

The telecom equipment industry ($DJUSCT) has been one of the hottest groups in 2019.  CIENA Corp (CIEN) had been one of the strongest companies within this space when it reported earnings back in the beginning of March.  Since that time, CIEN has pulled back, but on Friday reversed on increasing volume and closed back above its 20 day EMA for the first time in six weeks.  I like entry at the current price and again if CIEN were to pull back to 37.  A close below 35.50-36.00 would be problematic technically, while a target of 45.50 is what I'd look for.  Here's the chart: 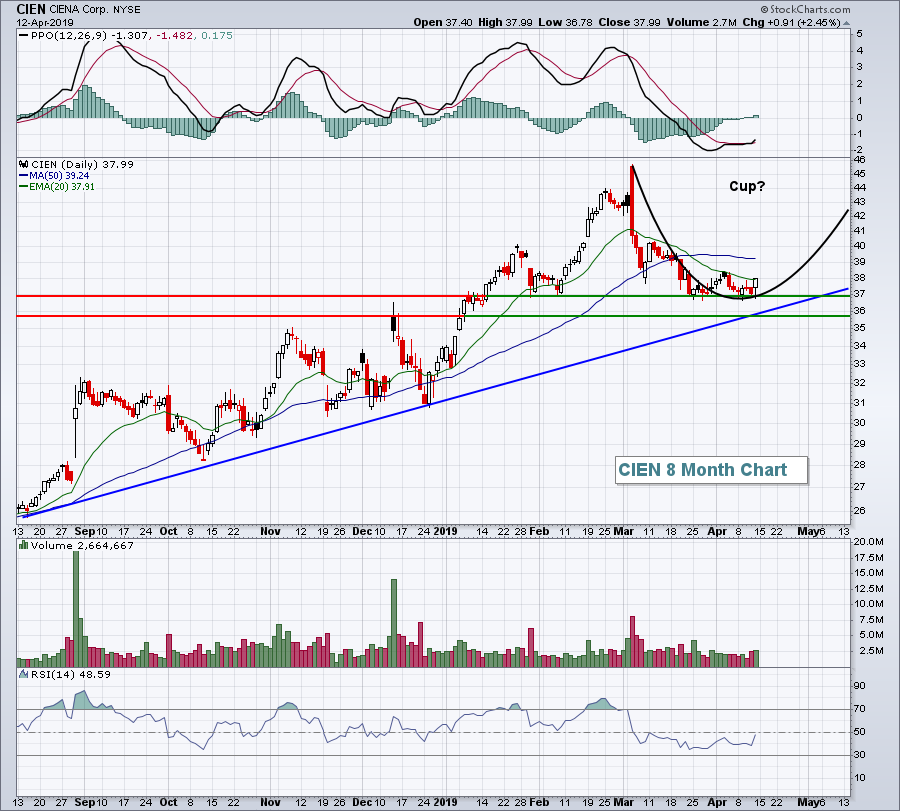 Obviously, it's way too early to tell whether a cup will form, it's simply something to watch for.  I look for continuation patterns to emerge off of uptrends, and a cup with handle is one pattern that we might see develop.

K12, Inc. (LRN) has more than doubled since October 2018, but it's worth noting that over the past 13 years, LRN has really struggled once it gets past April: 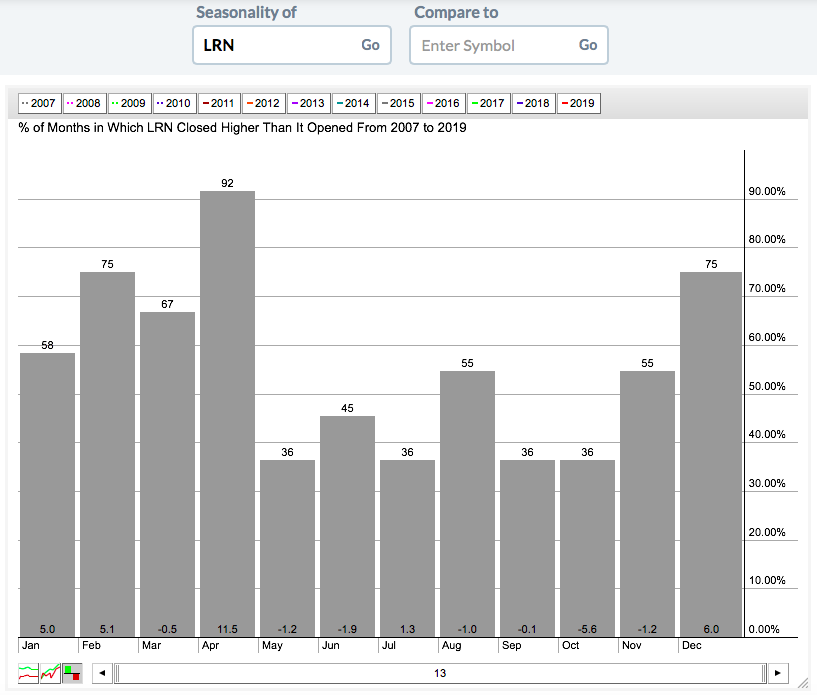 Clearly, December through April has been LRN's seasonal strength.  The dropoff from May through October is rather amazing.